Tyler Pilcher led off the game with a line-drive home run to left, and then no-hit the Vandals through the first three innings. Cole Braunecker pitched the final two innings, allowing the Vandals’ only hit – a double by junior Nick Metzger – to lead off the top of the fifth.

The Vandals' offensive performance was not helped by the team's poor pitch selection.

Only four Vandal at-bats lasted longer than four pitches, and coach Luke Hohlt said the team not only needs to get better at working the count, but also at swinging at good pitches.

“One of our goals is to have quality at-bats,” Hohlt said. “We were counting on Effingham’s pitchers throwing strikes, and we took some pitches that we shouldn’t have.”

Two Vandals struck out looking in the game.

Ian Murrell started for the Vandals, and Hohlt said the junior’s season debut – which included four strikeouts in the first two innings – was good for the most part.

“Ian had a great outing until the fourth inning,” Hohlt said. “At this point in the season, that’s what we are looking for.”

In the fourth, six straight Effingham batters reached base,  and included in that stretch was a two-run home run to left by Mitch Meinhart that give the hearts a 6-0 lead.

Murrell allowed a third homer to left in the fifth, which prompted a pitching change to sophomore Leyton Godoyo.
He allowed three hits before getting the final out of the inning.

Despite the lopsided final score, Hohlt said he did see some things that were encouraging that helped offset some of the miscues. But he knows the team must get better before the conference season starts on Friday at home against Carlinville.

“We will build off of this,” he said.

Notes
Pilcher nearly hit for the cycle, falling a single short; he did reach base in all four of his at-bats, but his third plate appearance resulted in an error … Murrell took the loss, allowing nine runs (five earned) over 4 2/3 innings; he struck out six batters … Junior Trevor Montgomery and Godoyo reached base on a walk and an error, respectively.

Berning and senior Matt Hoffman both homered for the Vandals, but a late surge from the Eagles – including a five-run sixth inning – sealed St. Elmo's victory.

Senior Kase Stolte and sophomore Connor Beasley had home runs for the Eagles, and seven other hitters recorded at least one hit.

Beasley struck out five in seven innings to pick up the win. Hoffman was hit with the loss.

Berning also had two singles for Vandalia, and sophomore Jacob Rau was 2-for-3 with a double.

Vandalia at St. Anthony
The Vandals split two games at the St. Anthony Round-Robin on Saturday, defeating Cumberland, 17-10, and falling to the hosts, 11-1.

A nine-run second inning propelled Vandalia ahead against the Pirates, and six more in the seventh gave the Vandals some extra insurance.

Rau and Murrell both had four hits in the game and combined for six runs batted in. Murrell had a home run.

Sophomore Matt Campbell was 3-for-5 with three RBI.

Against St. Anthony, the Vandals allowed at least one run in every inning while scoring just one of their own in the bottom of the first. 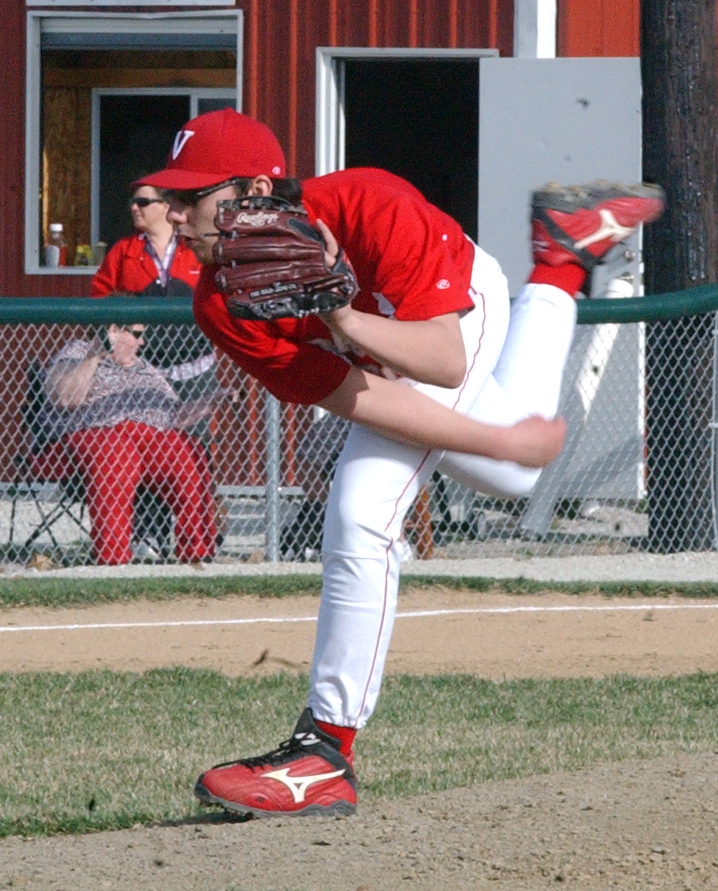 Junior Ian Murrell follows through on a pitch against Effingham on Wednesday. He took the loss in that game.