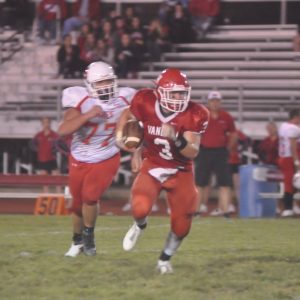 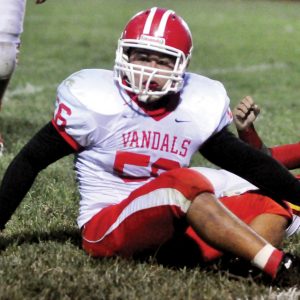 But he doesn’t care.

The list of successful football players of Asian decent is short.

But he doesn’t care.

Some of the biggest rivals in the South Central Conference will bring offensive linemen with much more girth.

But, again, he doesn’t care.

And why should he? 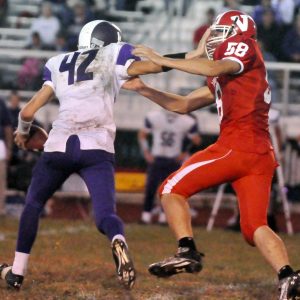 The Vandals scored on their first offensive play of the game, and despite losing seven fumbles after that, Vandalia still came away with a big 47-6 win against Litchfield last Friday in front a large homecoming crowd.

Senior Alex Newsom rushed nearly untouched for 49 yards on the first play. It was the third time he has gained more than 30 yards on Vandalia's first play this season.

Following this Friday’s game against Hillsboro, the Vandals hope to be playoff eligible.

Carrying a 4-1 record into the game, Vandalia will be in search of its fifth win to put a check mark next to the season’s first big goal.

“That is one of our goals, and then we start working for seeding after that,” said coach John Stout. “It’s a big game for us on Friday night.” 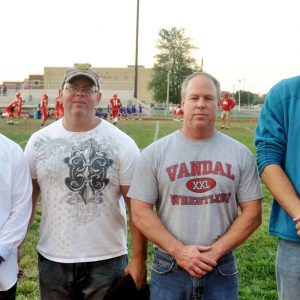 Three individuals and one team were inducted into Vandalia Community High School’s Athletic Hall of Fame in a ceremony prior to last Friday’s football game against Litchfield.

During his 14-year stay as coach of Vandalia’s wrestling team, Glenn Exton brought the program to prominence, advancing the team to state in his third season and going back eight more times. 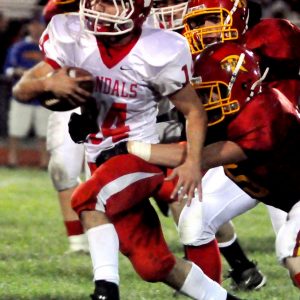 ROXANA – If Roxana wasn’t some 60 miles away, the Vandals probably just would have run home instead of taking the bus. 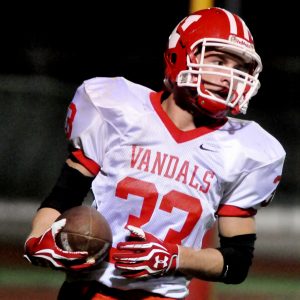 Coming home for the first time since Aug. 31, the Vandals will look to bring a homecoming crowd a big victory against Litchfield on Friday at 6:30 p.m.

Vandalia (3-1) has scored at least 40 points against the Purple Panthers (1-3) in each of the past two seasons, and with the team’s offense coming off of a 483-yard effort at Roxana last Friday, another big win could be on the horizon.

The game will be played in front of several former players who are being inducted into the VCHS Athletic Hall of Fame with the 2007 wrestling team, as well as former defensive coordinator Glenn Exton. 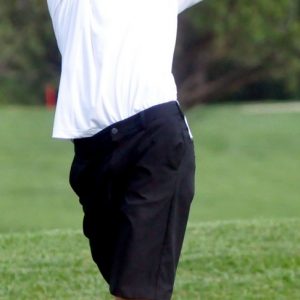 FILLMORE – The Vandalia golf team will compete in the South Central Conference Tournament on Monday at The Rail in Springfield.

Vandalia has struggled of late, but coach Brandon Taylor said that due to so many good teams being in the conference, a top-three finish would be difficult even if the team was playing well.

“I hope for the best, but I wouldn’t be surprised if we are on the outside looking in,” he said.

Title contenders at the event are led by Greenville, which has four losses on the season, Carlinville, and Hillsboro.

The Vandalia soccer team tied Christ Our Rock Lutheran last Thursday for its first non-loss of the season.

Senior A.J. Gaylord scored his first goal of the season, and the second came on an own goal by a Silver Stallion player.

Jussi Craycroft assisted on both goals for the Vandals (0-6-1) in the road contest. He has three assists on the season.

This marks the second straight season that the Vandals have tied CORL in a game. 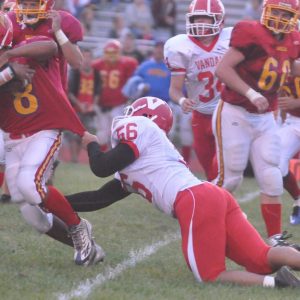 ROXANA – Eight tackles for loss and three touchdown runs of at least 59 yards propelled the Vandals to a 39-7 victory at Roxana on Friday night.

Senior Ryan Ambuehl scored on a 71-yard run on the second play of the game for the team's longest rush of the season, and senior Tim Ritchey scored on runs of 59 and 62 yards on back-to-back drives in the second quarter to give Vandalia a 27-7 halftime lead.