The Lady Vandals kicked off their first game of the Litchfield tournament with a showdown against the Nokomis Redskins Saturday night and while it wasn’t the prettiest of games, they came away with a 43-32 win nonetheless.
Vandalia opened up the game with a 2-0 lead, following a pair of free throws by senior Makayla Tinker.  Nokomis answered with an long-range two and layup to take a 4-2 lead early on in the first quarter.
Both teams continued to trade baskets, as Vandalia senior Madelyn Hosick converted on a last-second layup to tie the game at 12 apiece going into the second quarter.
The Lady Redskins continued to find success shooting from the perimeter, knocking down a three-pointer and mid-range jump shot to open up the second with a 17-12 lead.
Vandalia junior Madison Klanke led a comeback with a pair of three-pointers, with her second giving the Lady Vandals a 21-19 lead with a little more than three minutes. However, a three-pointer from Nokomis would give them the 22-21 lead to end the half.
Vandals head coach Michelle McNary rallied her team at the half to help them come back strong against the young Nokomis team in the second half.
“(I told them) Just to settle down. We were struggling shooting. We’ve had games like this for the last couple years were we struggle shooting. Defensively, though, I feel like we are good enough to keep ourselves in games, which we had at the halftime,” McNary said. “I just told them they needed to step it up a little bit. The seniors need to step up. This is a team we haven’t beat very many times since I’ve been coaching.
“They are a young team and as long as you let them hang around, they think they can win. I think the seniors stepped up and did a nice job. “
Nokomis was able to find some early success in the third quarter, knocking down a jump shot to extend its lead to 24-21.
Vandalia answered with a pair of baskets inside the paint from seniors Hosick and Leah Francis to take a 26-24 lead.  Both teams traded baskets, as Nokomis was able to even up the game at 30 apiece with less than two minutes to play in the third quarter.
From there, the Lady Vandals defense would take over. Hosick scored on a layup to give Vandalia a, 32-30, lead heading into the fourth quarter.
Tinker and Hosick led off the fourth with a pair of baskets inside the paint, extending the Lady Vandals lead to 36-30. A pair of free throws from senior guard Karlie Bright pushed the lead to 38-30.
Nokomis continued to struggle on offense in the fourth, failing to knock down a free throw, as well as committing multiple turnovers.  McNary attributed the defensive success to a switch in schemes.
“They were getting some easy looks in the two-three, so we switched to the man, just because I felt like this was a group we could stay with. It changed the way the game went and they weren’t able to get as easy of looks,” McNary said.  “We caused them to turn the ball over a little bit and pull away, and you know I got four seniors who should be able to step up and do that. They took care of the ball at the end; we made them play man-to-man, which is better suited for us. (It was) just a nice team effort. “
Hosick and Tinker closed out the game with five more points, which proved to be more than enough, as Nokomis didn’t score its first fourth-quarter points until there was less than a minute remaining en route to the Vandals 43-32 win.
Hosick and Tinker led the balanced offensive attack with 12 and 11, respectively. Hosick also finished with a team-high seven rebounds.
“We were struggling outside shooting and I just told them they needed to start attacking the gaps and seeing if they could get to the hole,” McNary said. “And they both (Hosick and Tinker) did a nice job of doing that and getting some easy baskets to extend the lead in the fourth quarter. “
Other contributors for the Lady Vandals were Karlie Bright, with nine points; Madison Klanke, with six points on a pair of first-half three-pointers; and Leah Francis, with four points.
“We just have to keep playing hard. This wasn’t a pretty win, for sure. Nokomis played hard and took us out of our game a little bit,” McNary said. “We’ve got another tough game coming up on Tuesday and we just need to be ready to play each game one game at a time. “
The 2-0 Lady Vandals were to continue the Litchfield tournament with a matchup against Carlinville on Tuesday night. 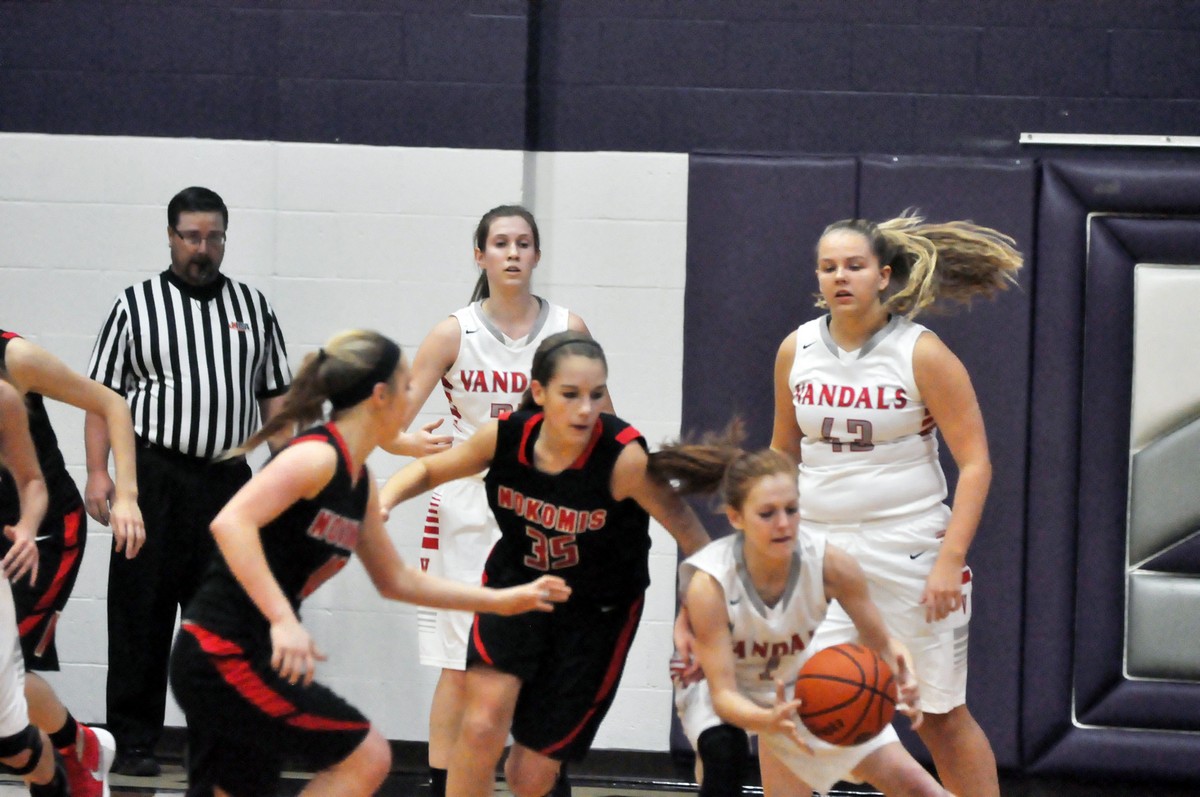 Anna Miller (1) comes up with a steal in the second quarter against the Nokomis Redskins, as teammates Madelyn Hosick (left) and Molly Kern (right) look on. 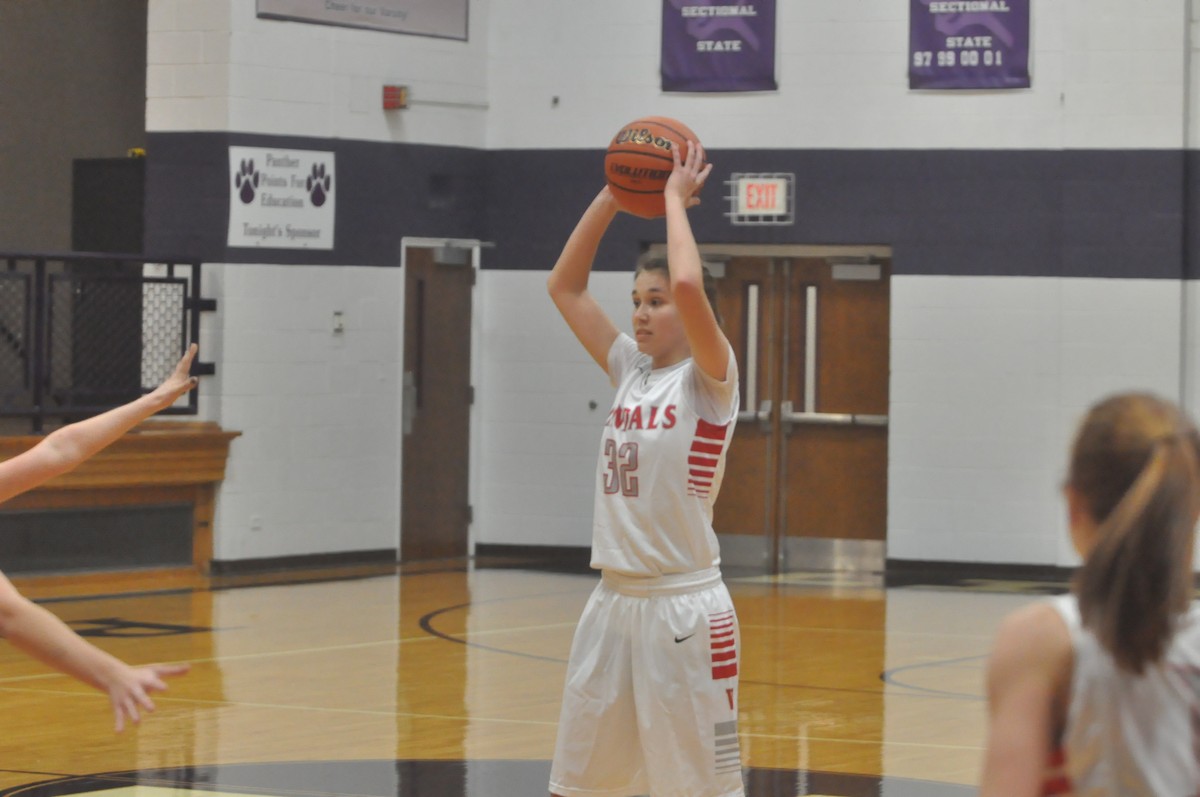 Madelyn Hosick looks to pass the ball from the top of the key. 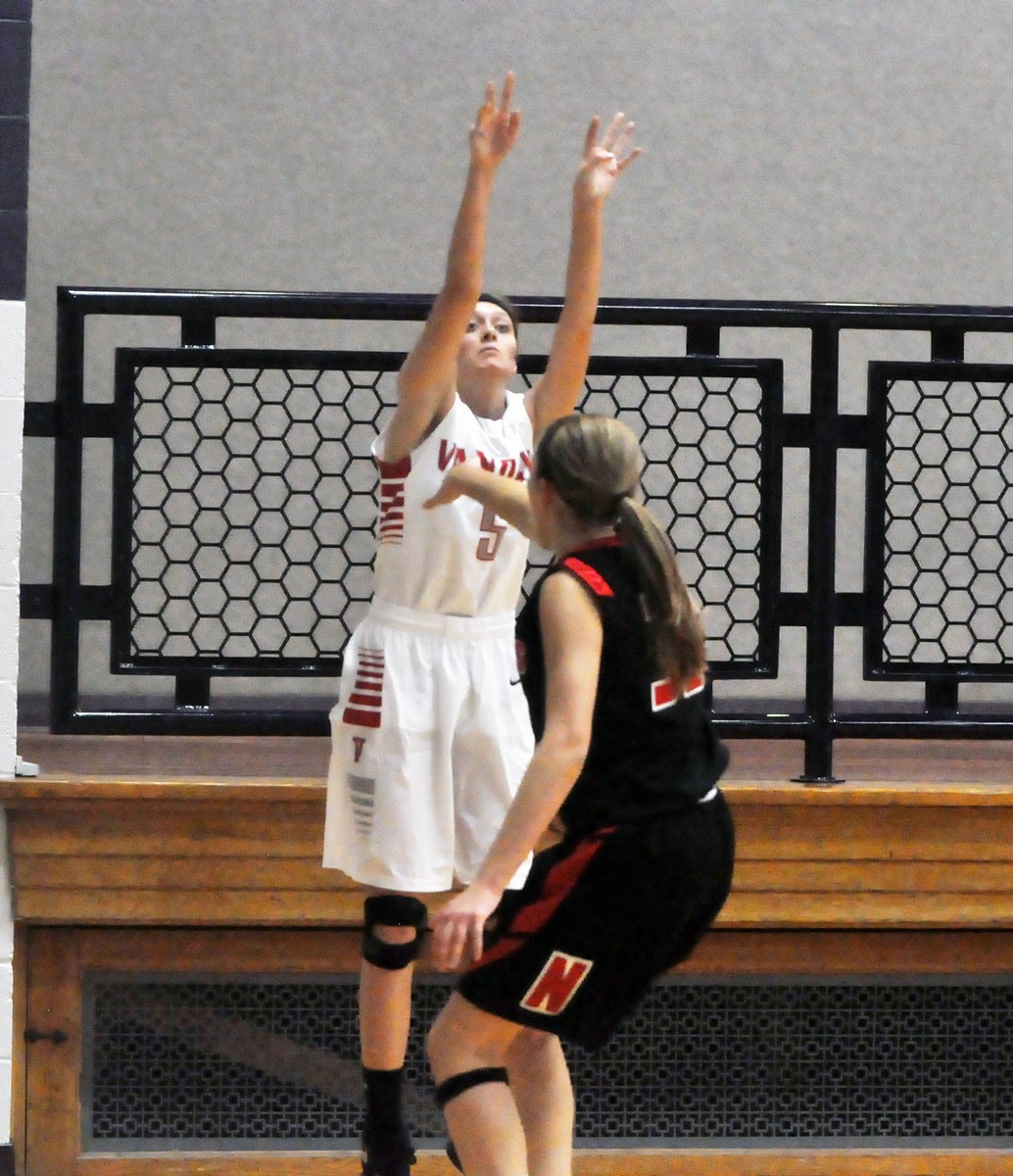