The Mulberry Grove Aces opened up their own tournament against Mt Olive in a big way Monday night, dominating the Wildcats en route to a 66-41 victory.
The Aces' leading scorer from last year, Tydarious James, continued from where left off, as he scored eight first-quarter points to give Mulberry Grove the early 15-10 lead.
Mulberry Grove continued its strong play into the second quarter, taking a commanding 23-11 lead after a three-pointer from sophomore Alex Franklin. Mt. Olive fought back within six, following a pair of free throws and a layup from sophomore Roger Conlee.
However, the Aces did not let up, as James capped off a 7-0 run with a mid-range jump shot to extend their lead to 30-19.  The Wildcats fought back once again, as junior Joey Baum scored on consecutive layups to cut the Aces' lead to 32-27.
Senior Austin Redfern closed out the half for Mulberry Grove, converting on a three-point play after drawing contact at the basket, giving the Aces a 35-27 lead at halftime.
Mulberry Grove carried its first-half momentum into the second, going on a 9-2 run to open the third quarter to take a 44-29 lead. The Aces' defense allowed just five points in the third quarter, limiting the Wildcats to tough shots from the outside.
“We’ve been working really hard on it (defense) in practice. We keep them on one side and force them on the baseline,” Aces head coach Mark Bollinger said.  “A couple of times we did chase them, but I thought we did a good job overall.”
With a 56-36 lead going into the final quarter, the Aces slowed down their play, chewing up the clock en route to a 66-41 victory.  James finished the game with a team-high 29 points, demonstrating a full arsenal on offense, scoring from the post and outside.
Senior Jack Criner finished with 10 points in his first action after missing the 2014-2015 season with an injury. Bollinger was particularly impressed with his dominance on the boards, as he grabbed crucial offensive and defensive rebounds.
“He (Criner) looked great. He was definitely key. He’s a beast in there. He moves people around with his big body,” Bollinger said. “We had to keep him out a little bit because he couldn’t run the full court during the whole game.”
Other contributors for the Aces were Redfern, with eight points; Michael Sloan, with six; Franklin, with six; Shawn Iberg, with five; and Josh Huhn, with two.
In other tournament action, Patoka dominated Ramsey, 80-29, and Sandoval edged Hutsonville, 79-74.
Bollinger is aware of the challenges that remain in the tournament, but is confident his team will compete.
“After watching those other games, Patoka is going to be so tough, so we are going to hang with them. The other teams were also wellcoached, very scrappy. This team (Mt. Olive) was not as fast, so we are going to have our hands full the rest of this tournament.” 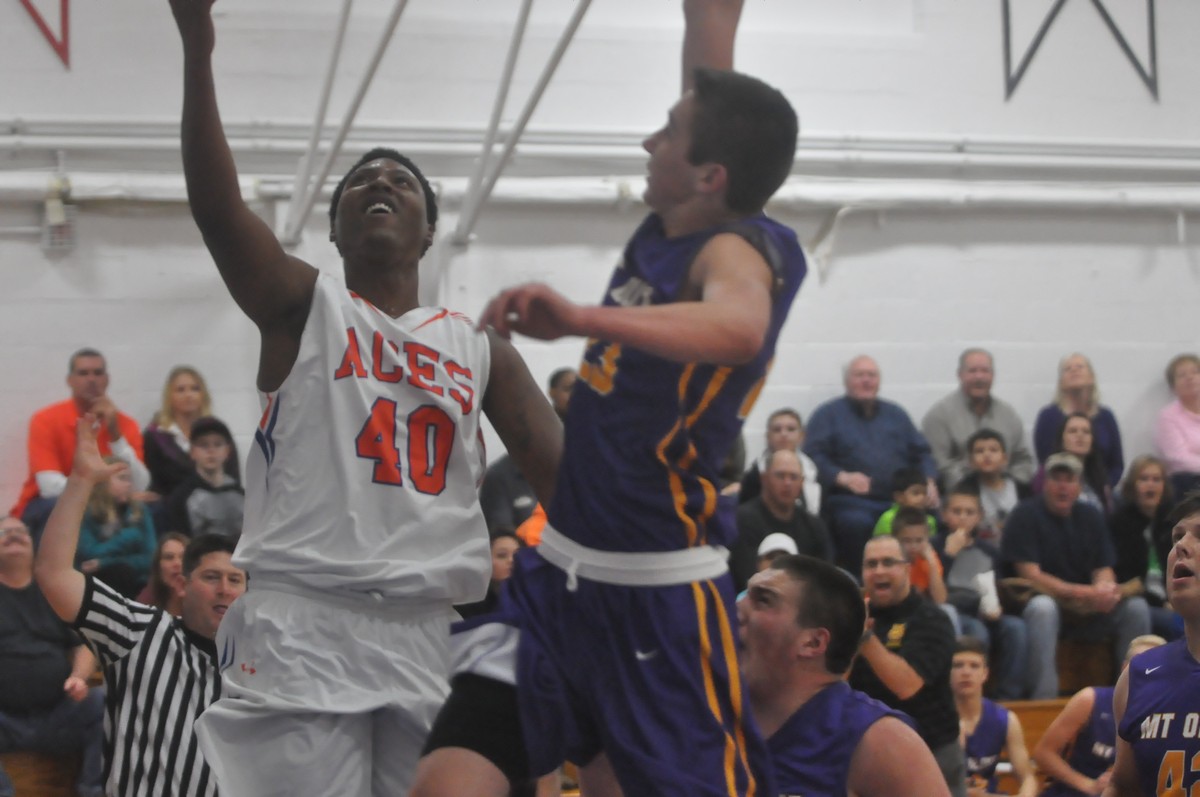 Tydarious James (40) puts in a layup over a Mt. Olive defender Monday night.