PANA — Pana set the theme early last Thursday night as the Lady Vandals faced them in the regular-season finale. The theme was experience, particularly at the varsity level.
The Panthers honored their six senior players prior to the match who had helped the lead them to their current undefeated record in South Central Conference play.
That record would remain unblemished, as the Panthers dispatched of the Lady Vandals in straight games for the second time this season, winning 25-17, 25-19.
However, the Thursday night loss was a slight improvement from the last meeting at Vandalia, in which the Vandals fell 25-13, 28-26.
“That’s what I’m hoping in a couple years that we will look like,” Vandalia head coach Amanda Walton said. “I mean, the varsity experience, as young as we are, will really help in the long run.”
The first game saw Vandalia fall into an early 9-3 hole. A Bailey Younker kill followed by a team block from Katie Tarkington and Leah Francis brought the Vandals within two at 11-9.
A 7-0 Pana run stopped the little momentum that Vandalia had, as the Panthers were able to close out the first game with a 25-17 win.
The Lady Vandals were not discouraged, as they fought hard to start off the second game, refusing to close out the season on a negative note. A kill from Jalea Paslay brought the Pana lead down to 15-13.  A kill from Madison Klanke kept the Panthers from pulling away, still holding a two-point lead at 17-15.
Pana’s experience was still too much for the young Vandal squad to overcome, as the Panthers closed out the second game on a 5-0 run to win 25-19, capturing the match victory. With the win, Pana finished the regular season with a perfect conference record.
Despite the loss, Walton was proud of the way her team competed in the regular season finale.
“I told them to keep playing like that. Tonight, we actually fought and had long rallies,” Walton said.  “I told them to be ready to come in and face them on Tuesday (at the regional).“
Walton, a first-year head coach, reflected on what she had learned and what was important to do in leading a young team.
“I just try to get the girls to focus and understand, keep them energized, remind them why they are playing,” Walton said. “Towards the end of the season, they kind of forget why they are playing or why they want to do this. I just try to remind them throughout the season."
The Lady Vandals finished the season on a four-game losing streak, giving them a 7-17 regular season record.
The team will lose seniors Mindy Ritchey, Rylee Wollerman, Jalea Paslay, Leah Francis and Lexie Buechel, while returning nine varsity players for the 2016 season.
The 7-16 record seeded Vandalia No. 10 in the Shelbyville Sectional with a first round match versus No. 11 Virden (North Mac).
Regional
Vandalia faced off against the Virden Panthers with their season on the line Monday night in the IHSA regional quarterfinal.
Determined to advance to the next round, the Lady Vandals were able to come out to a quick 3-0 lead, fueled by a block and kill from sophomore Katie Tarkington.
An ace from Shelbi Stewart positioned the Lady Vandals with a comfortable  10-4 lead.
The Panthers would fight back though, tying it up at 15-15 following an ace. A serving error by Virden followed by a Leah Francis kill would give a 17-15 lead back to Vandalia.
The back-and-forth battle continued as the Panthers took a 23-22 lead, their first of the game.
However, a pair of kills from Bailey Younker and a Tarkington block helped the Vandals close out a, 25-23, first-game win.
The Lady Vandals came out to another hot start in the second set, with Tarkington recording the first two points on blocks.
Tarkington then served a 6-0 run to give Vandalia a commanding 8-1 lead.
"I think both middles frustrated them a lot," Vandals' head coach Amanda Walton said. "Jalea (Paslay) was hitting them really well and Katie was hitting them really well, which I think really frustrated them."
But, just like the first game, Virden  battled back, bringing the game to a 15-15 tie.
Both teams battled back and forth holding a tie on five different occasions.
Determined, the Lady Vandals were able to pull away and win the match with a 25-22 second game win.
"We came out really strong, but we always hit this low spot, where I think we get too confident and then once they get two or three points in a row, they kind of let down. Then we fight our way back up."
The win advanced them to a showdown with the No. 1 seeded Pana Panthers Tuesday night.
Once again, Pana proved to be too much for the Lady Vandals to handle as they lost to the top seeded Panthers, 25-8, 25-11.
Vandalia was able to grab an early 3-2 lead in the first game, but that would be the extent of its success.
Already up 12-5, Pana used consecutive 5-0 runs to take a commanding 22-6 lead, one the Lady Vandals could not overcome, as they fell 25-8 in game one.
WIth the end of the season on the line, Vandalia fought hard to take a 4-1 lead in the second game following a pair of kills from junior Madison Klanke.
A Tarkington carried the Vandals to a 10-5 lead but that would be the extent of their success as Pana took over.
Up 12-11, Pana led a 13-0 run to win the second game 25-11, advancing them to regional finals this Thursday. 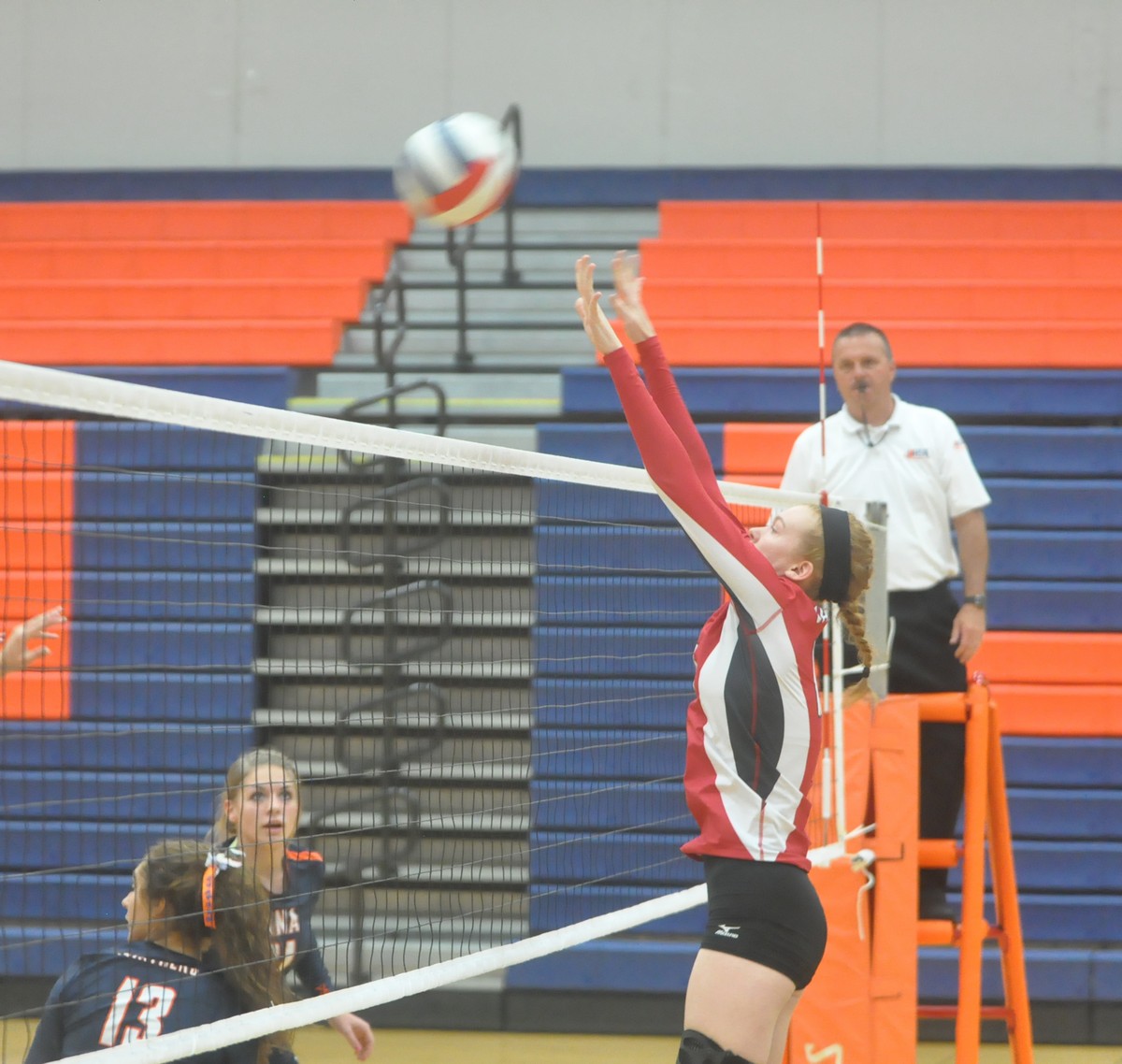 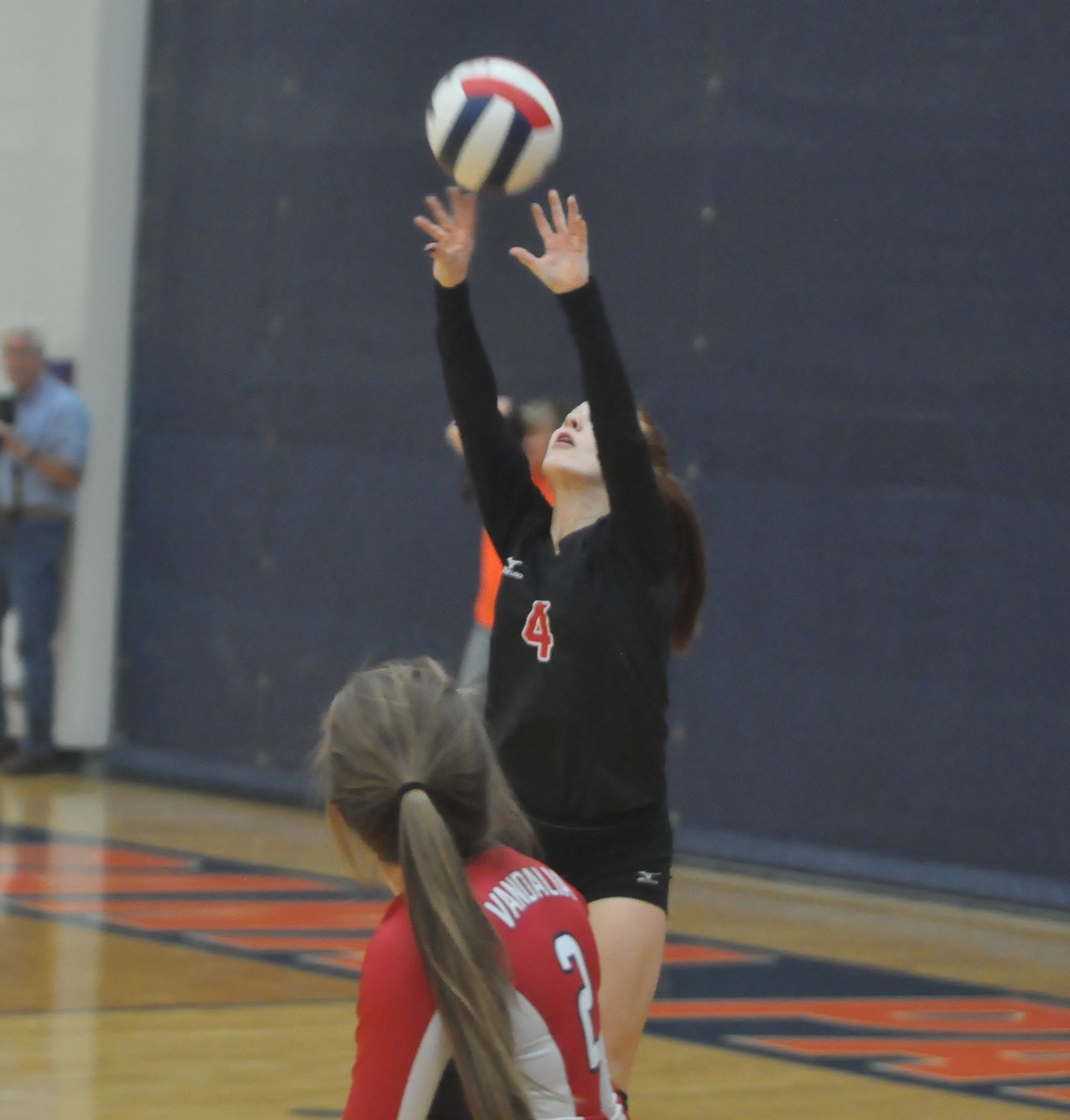 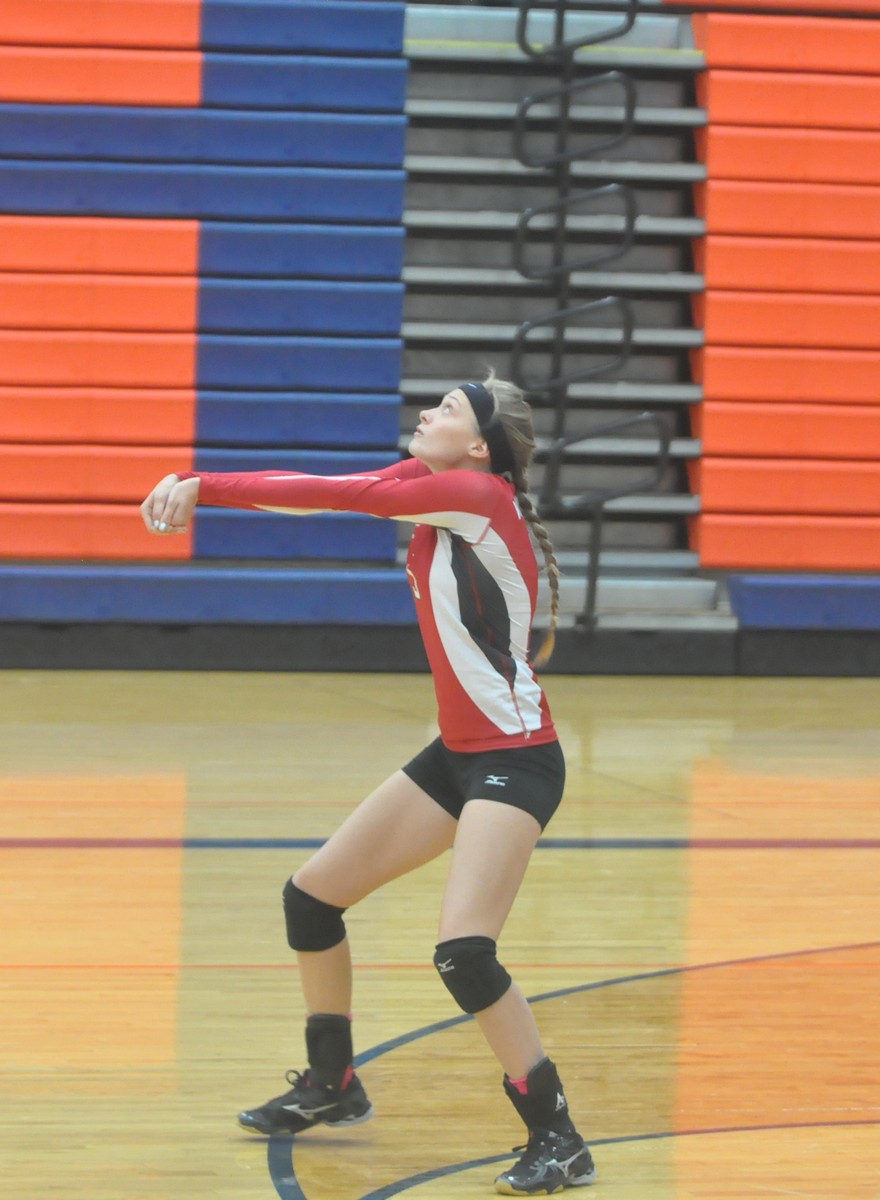 Madison Klanke waits to bump a pass in Monday night’s showdown with Virden. 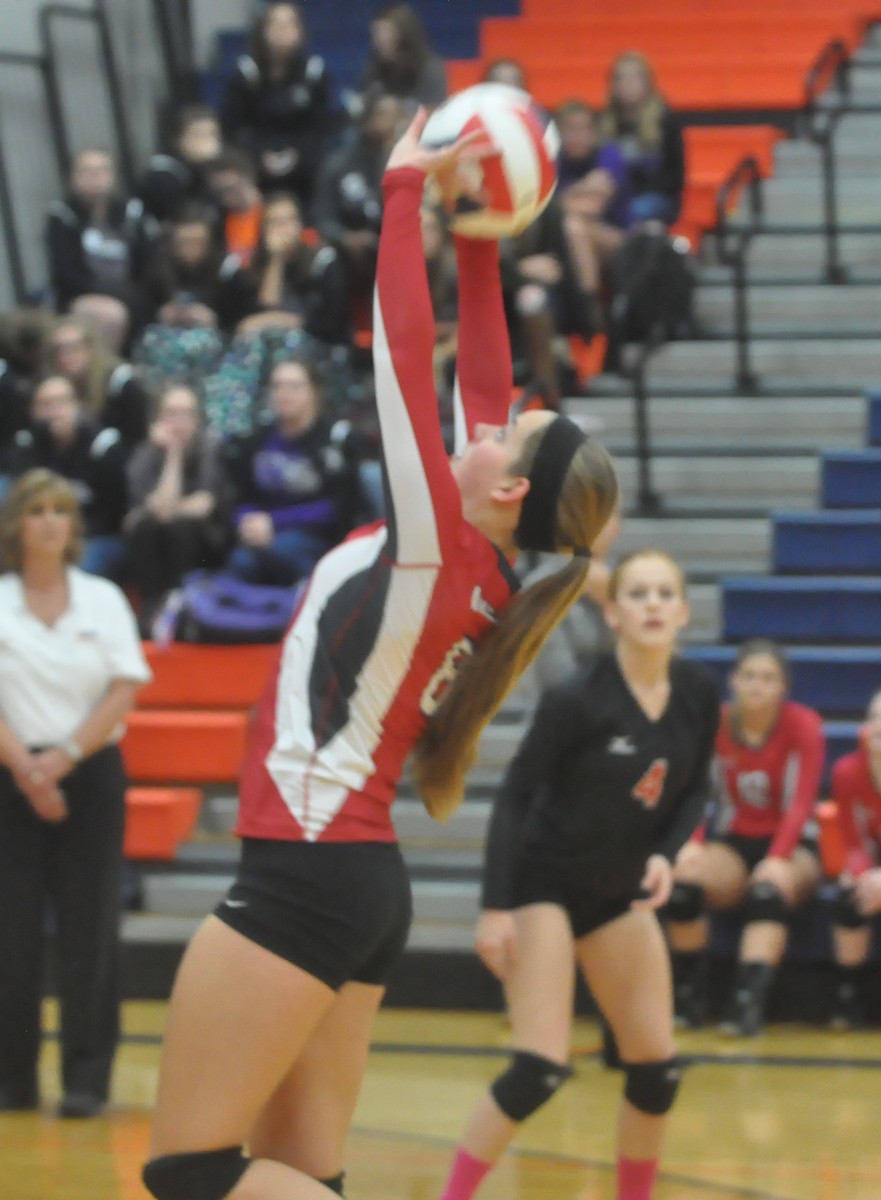