VANDALIA- Last Thursday’s volleyball match between the Lady Vandals and Greenville was about more than just a game.
It marked the seventh annual Volley For The Cure, in which money was raised from auctions and raffles in order to be donated to the Fayette County Cancer Fund, the Fear Nothing Foundation, and for the first time this year, the Jennifer Rogers Knebel Scholarship.
The Jennifer Rogers Knebel Scholarship is in memory of Jennifer Knebel, a former Vandalia Junior High teacher, who passed away from breast cancer last January. The Scholarship fund will award $1,000 to a local senior.
Knebel’s daughters, Caddie and Carson Howard, were honored before the varsity match Thursday night.
Six cancer survivors were also honored before the match, including guest speaker Mindy Miller.
Miller spoke about her experience, being diagnosed with breast cancer back in 2012, showing gratitude for all the support she received during her journey.
“I was fortunate enough to be surrounded by amazing family, friends and a community that supported me that I could never repay,” Miller said.
She went on to talk about how she was able to gain a new perspective and passion after such a long, hard-fought battle with cancer.
“When I was going through my journey, I lost my fear,” Miller said. “But I gained a passion and I gained a purpose, and that is to give back.”
It was clear that the night's festivities inspired the Lady Vandals volleyball squad, as it came out playing arguably the best they have all season, battling back and forth with the Lady Comets.
The Vandals came out to a hot start in the first game. An ace from sophomore Shelbi Stewart gave them an early 7-3 lead. Greenville would battle back quickly, blocking an attempted kill from sophomore Katie Tarkington to take a 11-10 lead.
It was much of the same for the remainder of the first game, as there were six different lead changes. The Lady Vandals eventually secured a 19-18 lead that they would not relinquish,  thanks to a kill from senior Jalea Palsay.  Tarkington slammed home a kill to give the Vandals a 25-22 first-game win.
However, Greenville battled back in the second game, taking a 13-5 lead early on. The Vandals were able to tie it up three times but could not gain a lead as the Comets took the second game, 25-23.
The Vandals appeared to have lost the momentum from the game one win, falling behind quickly in the third game, 11-9. A long delay followed.
The delay was a result of the Lady Vandals using a wrong lineup, something head coach Amanda Walton said was the case from the start fo the match.
"The lineups started out wrong, I made the mistake but they (referees) didn’t catch it until halfway through the third set," Walton said. "So we were playing all out of rotation and in different position most of the night."
With the lineups fixed after several minutes of delay, the Lady Vandals came out strong, battling the Comets back to an eventual 21-21 tie. A Tarkington kill gave them the 22-21 lead.
The Comets were able to make one last push, tying the game back up 23-23. However, the Lady Vandals asnwered with the next two points, picking up the game and match win on an ace by Tarkington.
Walton was proud of how her team fought all night, playing one its best matches of the season.
"They were playing inspired," Walton said. "They really stepped up, I thought Anna (Miller) did a great job back there. It was just a great team effort. Tonight was one of the first times I saw leadership out there."
Walton also commented on what was another successful Volley For The Cure, thanks in part to her team's effort and enthusiasm.
“It’s something that started when I was in high school and it’s kind of really really grown, and especially with Jennifer Knebel, that really hit home with the players," Walton said. "They were really excited to raise the money, sell the shirts; they put a lot of effort into everything.” 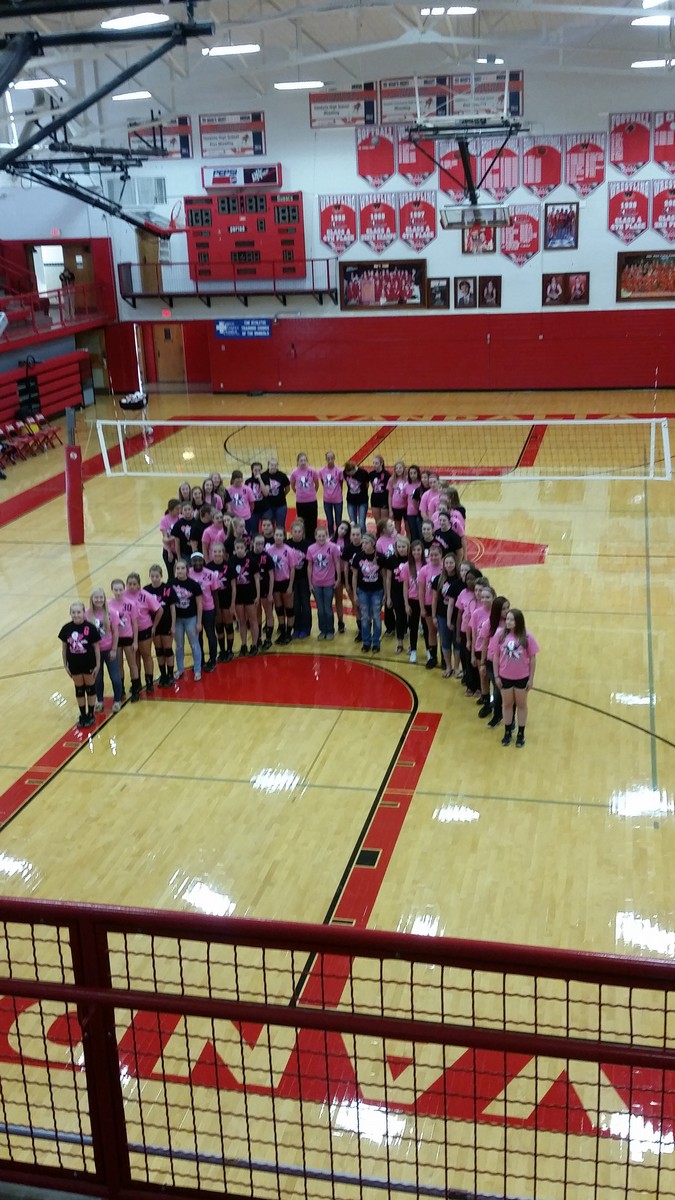 Both Vandalia and Greenville players form a cancer awareness ribbon prior to last Thursday’s festivities. 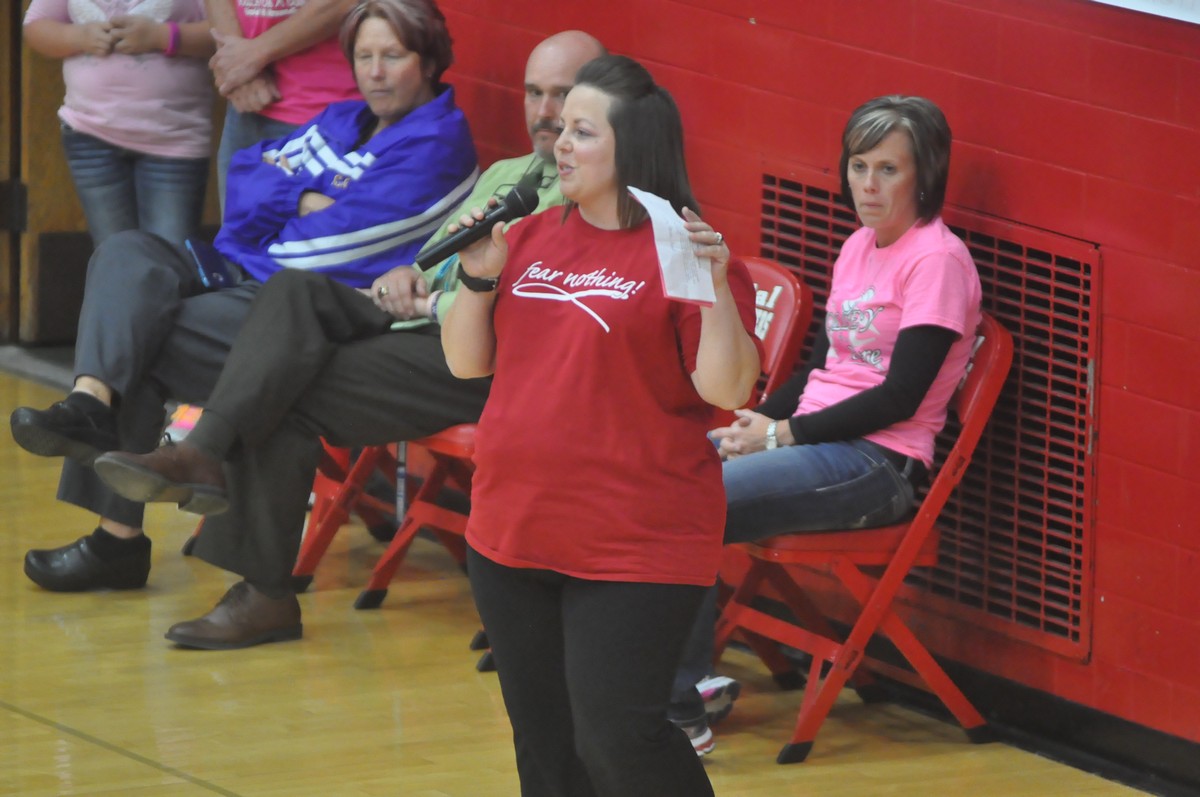 Guest speaker Mindy Miller talks about her journey, battling through breast cancer and the passion it inspired within her to give back. 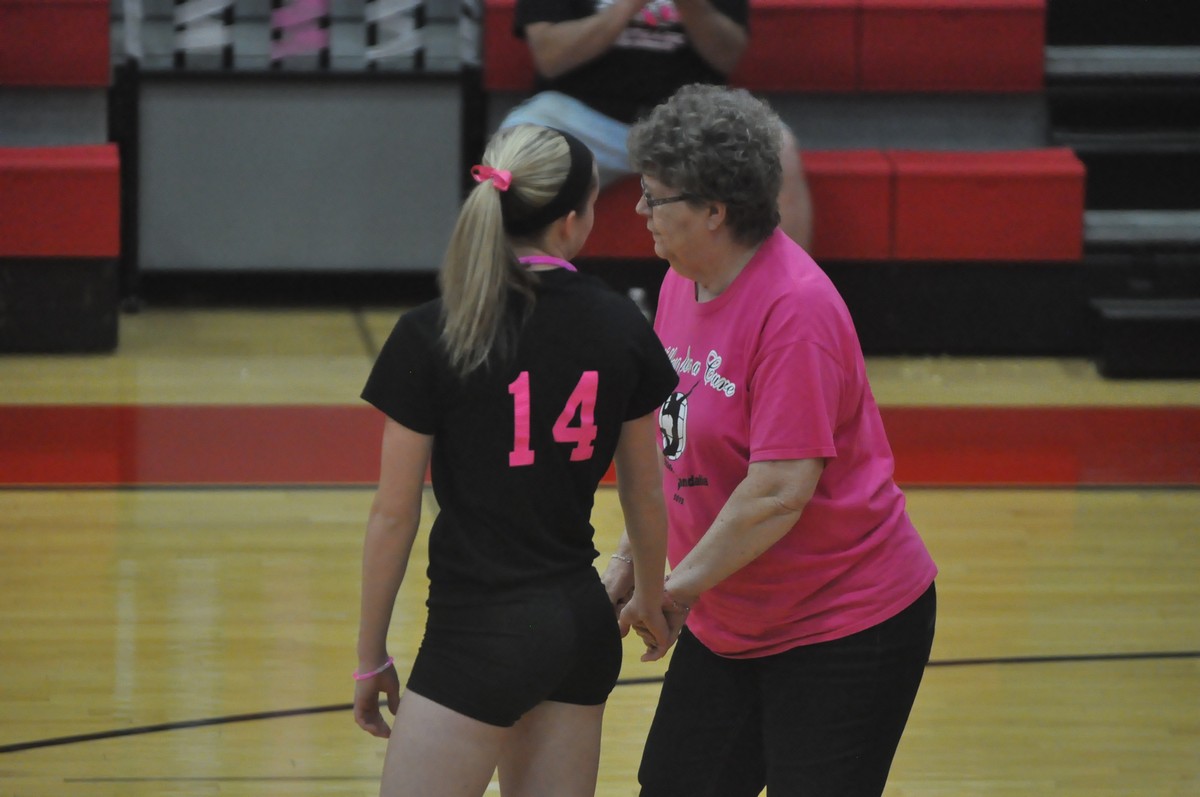 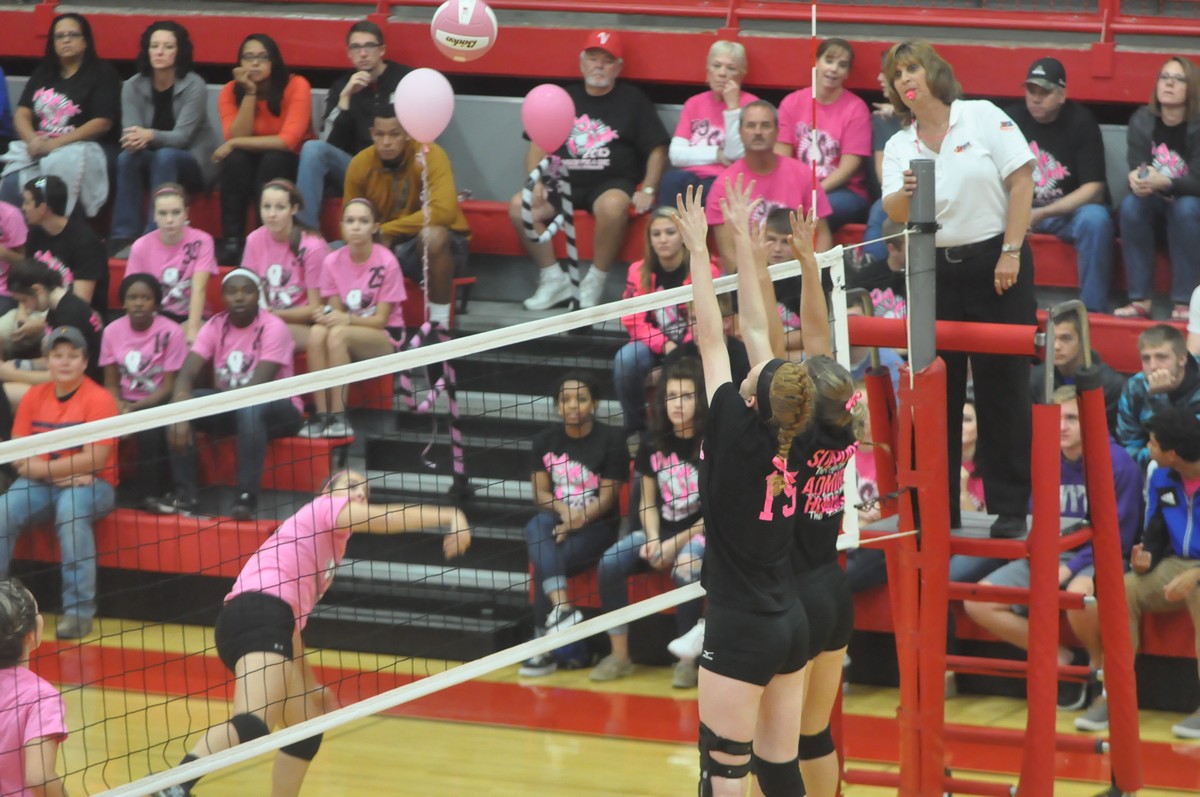 Katie Tarkington (15) jumps to block a Greenville attack in the VFTC match.