VANDALIA- Vandalia got a taste of its own medicine Friday night, surrendering 430 rushing yards to Roxana, a week after gashing the Staunton Bulldogs for 222 rushing yards of its own.
Roxana's Blake Vandiver and Jordan Hawkins dualed each other, taking turns busting off huge runs against the Vandals defense en route to 165 and 143 rushing yards, respectively.
However, the Vandals' defense came out strong, forcing a turnover on downs with the Shells in the red zone and a fumble on the Shells' second possession. The fumble was forced by sophomore linebacker Garrett McNary.
Vandal quarterback Richie Well could not capitalize on the early turnover that gave the Vandals the ball at Roxana's 34-yard line, throwing an interception on third down.
The interception set the Shells up at their 1-yard line. However, that wouldn't be an issue, as Roxana needed only five plays to give them its first score, a 3-yard rushing touchdown. The touchdown was set up by a 78-yard pass from Chance Foss to Trace Gentry, his lone catch of the game. A successful PAT gave the Shells a 7-0 lead with 9:49 remaining in the first half.
Well continued to struggle to find any success throwing the ball down the field on the Vandals' next drive, throwing his second interception of the day that Roxana seemingly returned for a touchdown. A personal call negated the score, setting the Shells up deep in their own territory again, at its 14-yard line.
Once again, though, Roxana was able to march down the field, picking up the majority of the yards on a 75-yard rush that put them at the Vandals 18. A 5-yard touchdown throw culminated the five-play 86-yard drive, extending Roxana's lead to 14-0 with 4:59 left in the half.
Vandalia was able to counter, as sophomore wide receiver Marcus Zimmerman was able to return the ensuing kick-off to Roxana's 40-yard line.
The Vandals took advantage of the short field two plays later, as senior running back Bobby Bradley scored on a 30-yard run, cutting the Roxana lead to 14-7 with 3:16 left in the half.
That would be the extent of the Vandals' momentum, as Roxana continued to gash Vandalia, scoring on a 55-yard rushing touchdown to extend its lead to 21-7 that it would carry into halftime. Roxana had three different plays for more than 50 yards in the first half alone.
"With the kind of system they run, it’s almost like option football and a lot of one-on-one stuff" Vandals head coach John Stout said. "With them, you can’t gang tackle; they make you cover the whole field. A lot of times their guys made our guys miss.  Part of it is a tribute to their backs.
The second half didn't fare any better for the Vandals defense. Roxana came out on the offensive immediately, scoring on the opening drive in only two plays, as it picked up its second 75-yard rushing touchdown of the day. A successful two-point conversion pushed the score to 29-7 with 10:52 in the third quarter.
The Vandals offensive struggles were just as apparent Friday night, as they were forced to punt after picking up only one first down on the next drive.
Roxana did not let up, as it continued a steady ground attack on the next drive. This time, an eight-play, 73-yard drive in which every play was a rush, culminated in a 33-yard rushing touchdown. That would be the Shells' final score of the game, giving them a 36-7 lead with 2:40 left in the third putting the game out of reach.
The Vandals managed a little bit more offense, putting together a 12-play, 89-yard drive ending with Bradley's second score of the game, a 13-yard rush.
However, the drive ate up much of the final quarter as Vandalia trailed 36-14 with 1:25 left to play.
A couple of Roxana quarterback kneels put an end to the one-sided affair from the Shells, who finished the game with 521 total yards.
" We have to turn the page. We were sitting in the same situation last year at 2-2," Stout said. "We just need to make the big push like we did last year."
Vandalia will look to bounce back this Friday when they travel to Litchfield. The game is scheduled to start at 7 p.m.
Game Stats
Vandalia complied 224 total yards of total offense (59 passing and 165 rushing).
Bradley ran 20 times for 136 yards and a score. Kelly Jones also ran for 17 yards on four carries.
Well completed 5 of 16 passes for 59 yards and three interceptions.
"They packed the box and tried to force us to throw and prove we can complete passes.We completed some, but we weren’t consistent enough to make them get out of that and cover us where we could run the ball" Stout said.
On defense, both Zimmerman and McNary recorded five solo and one assisted tackle. McNary also had a forced fumble.
Roxana recorded 521 total yards of offense (430 rushing and 91 passing).
Blake Vandiver carried the ball 11 times for 165 yards and two touchdowns. Jordan Hawkins had 14 carries for 143 yards and one touchdown. Jarred Foiles also added 54 yards on eight carries for a touchdown.
Chance Foss completed 3 of 7 passes for 90 yards and one touchdown.
Trace Gentry caught one pass for 78 yards, while Vandiver caught one pass for five yards and a touchdown.
On defense, Billy Mathis had a team-high 12 total tackles. Talon Pile, Jordan Hawkins and Dreyton Daugherty each recorded a tackle for a loss as well. 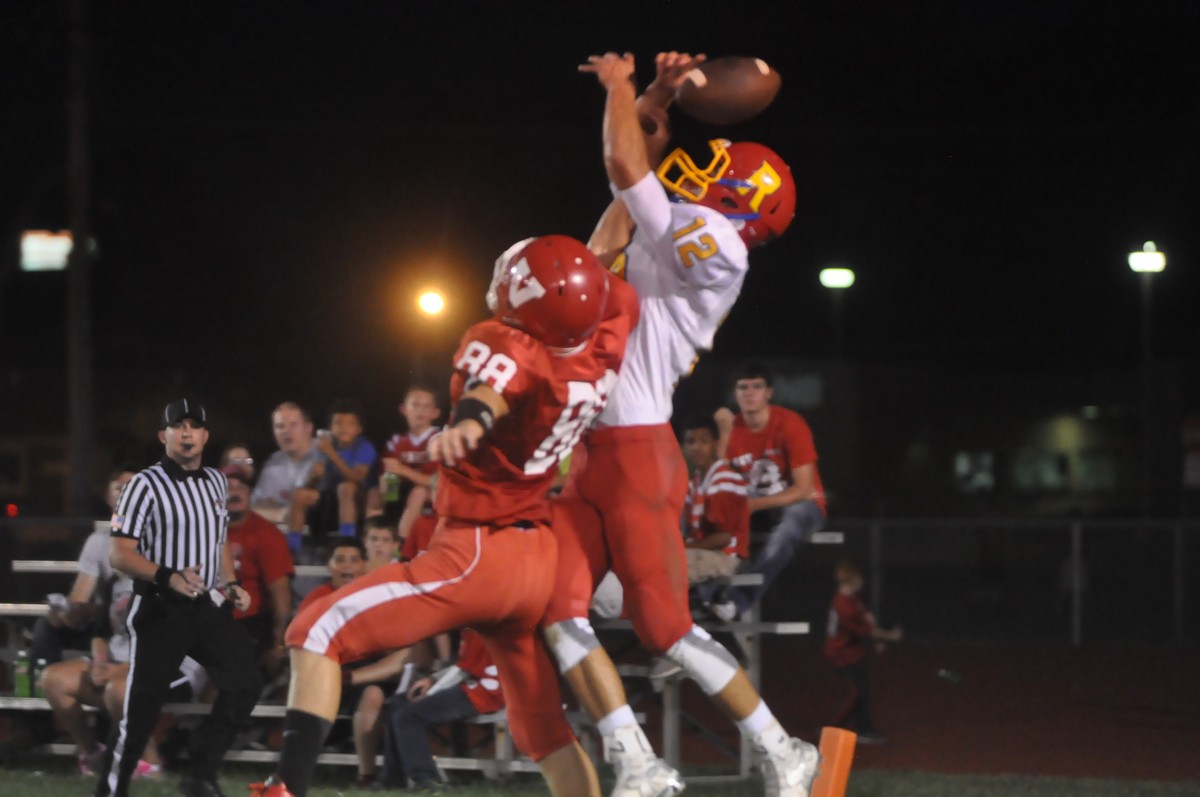 Marcus Durbin (88) goes up for a pass in the end zone Friday night. 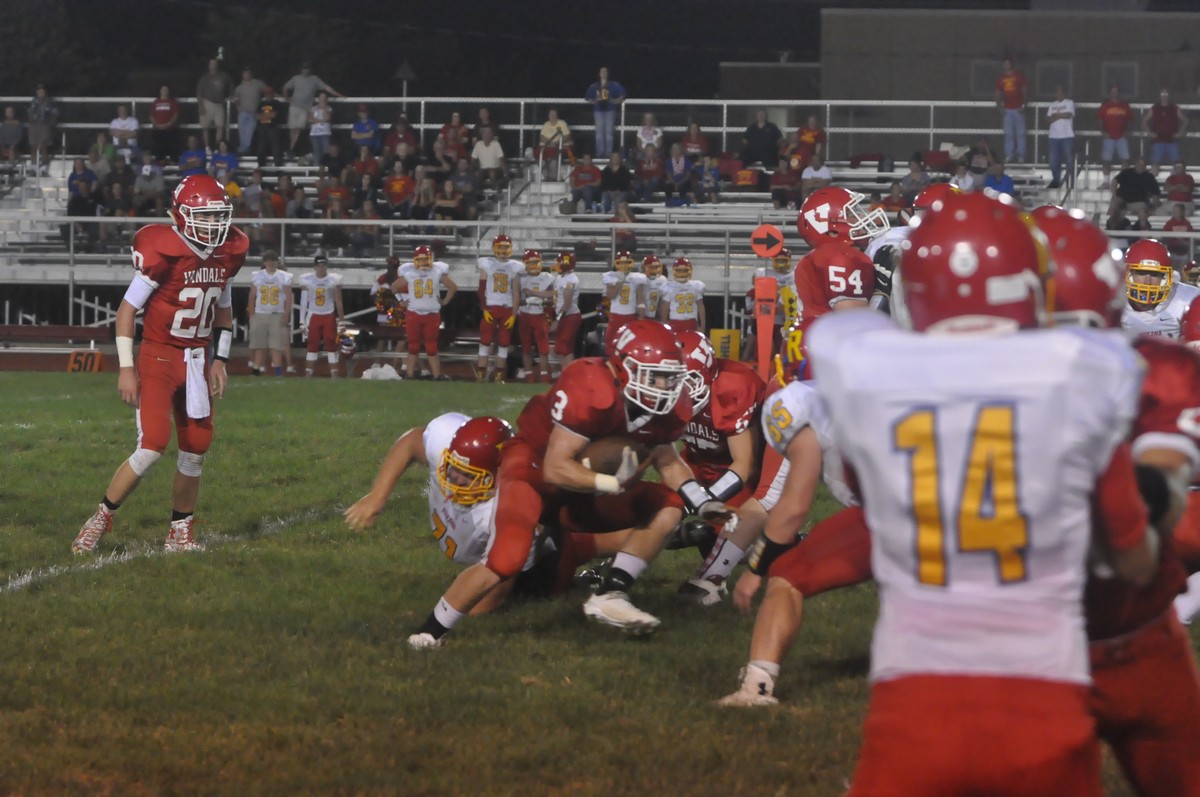 Bobby Bradley (3) takes a carry as he squares up with Roxana’s Billy Mathis (55). Mathis finished the game with a team-high 12 tackles.