VANDALIA- The Lady Cougars kept on rolling Saturday afternoon as they dominated pool play in the 22nd annual Vandalia Volleyball Tournament, setting themselves up for a championship match with last years winners, the Carlyle Indians.
That pool play dominance would continue into the championship match, as South Central's balanced offense was able to win the tournament in straight sets, 25-22, 25-20.
South Central head coach Mary Brimberry was short and to the point with her reaction.
"It’s been a long time and the girls played hard," Brimberry said. "They deserved it."
The Lady Cougars opened up the tournament with the first match versus the Lady Vandals. Vandalia carried its struggles with serving errors into the tournament, as they were unable to pick up any wins in pool play, salvaging a seventh-place finish with a 25-12, 25-20 win over Patoka.
However, Vandalia was able to get off to a hot start vs. South Central winning the first game, 25-21.
The Lady Vandals stayed competitive in the first set, as they were able to tie the score up on nine different occasions. However, the Lady Cougars stayed strong, winning the second game 25-20 thanks to a Vandalia serving error.
South Central took over in third game, never trailing en route to a 15-9 game and match win. Leading the way in the first match for the Cougars were Deidra Schaal and Hannah Rubin who recorded seven kills each.
"Usually we can come out in our first set full of energy compared to [our first match]," Brimberry said.  "But it was a great effort all day."
The Lady Cougars carried their early momentum into the second match vs. Lebanon, winning in consecutive games, 30-28, 25-10.
Emily Chapman and Schaal were key contributors, with 11 and 9 kills, respectively. Kendall Burleyson also added a team-best 13 assists.
The Lady Cougars finished up pool play versus East Alton Wood River, who was able to put up a fight.
South Central was able to capture the first game thanks to a game-winning kill from Chapman, but dropped the second game, 25-18.
Kills from Chapman and Schaal gave the Cougars a quick 2-0 lead in the third set, one they would not relinquish en route to a 15-10 set and match win, setting themselves up for championship match with the Carlyle Indians.
The win also marked a milestone for South Central's coach Brimberry- her 500th career win.
"I have had a lot of good athletes and you can’t do it without that," said Brimberry.  "This is my 21rst season and its awesome, it’s a good feeling."
The Cougars caried that positvie feeling into the championship match.
A kill from Chapman sealed a closely contested 25-22 first game win for South Central.
Another kill from Chapman gave the Lady Cougars their biggest lead of the second set, 19-12. It proved to be more than enough, as they were able to hold on to pull out a 25-20 second set and match win, capturing the championship at the 22nd annual Vandalia Volleyball Tournament.
Burleyson led the way in the championship effort with a team-high five kills, with Chapman also recording a team-high nine assists.
Brimberry commended her team for its strong team effort throughout the tournament.
"It’s such a team effort all the way around," Brimberry said.
"If you see someone killing it, then you will see someone else digging and someone else serving. It takes them all and that's what I tell them."
The tournament win pushed the Lady Cougars' record to 14-1 and 4-0 in National Trail Confernce play for the season.
Greenville took third place in the tournament, beating Lebanon in straight sets, 25-17, 25-23.
South Central Tournament Stats
Kendall Burleyson, 13 kills, 47 assists, 5 digs and 3 aces; Deidra Schaal, 26 kills, 20 digs and 4 aces; Hannah Rubin, 18 kills, 24 digs and 6 aces; Emily Chapman, 29 kills, 37 assists, 4 stuffs, 4 digs and 2 aces; Abbey Garrett, 16 kills, 2 stuffs, 1 dig and 2 aces; Serena Germany, 4 kills, 4 stuffs and 1 dig; Kacie Crain, 8 digs. 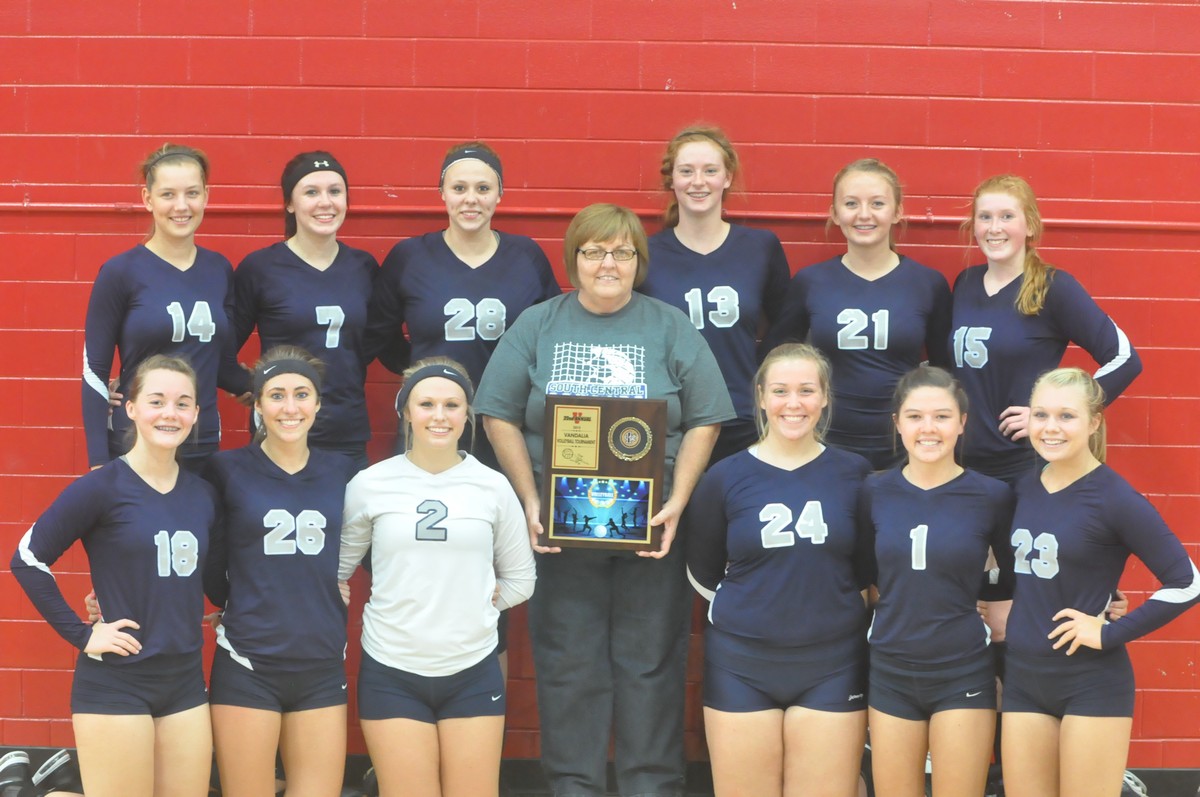 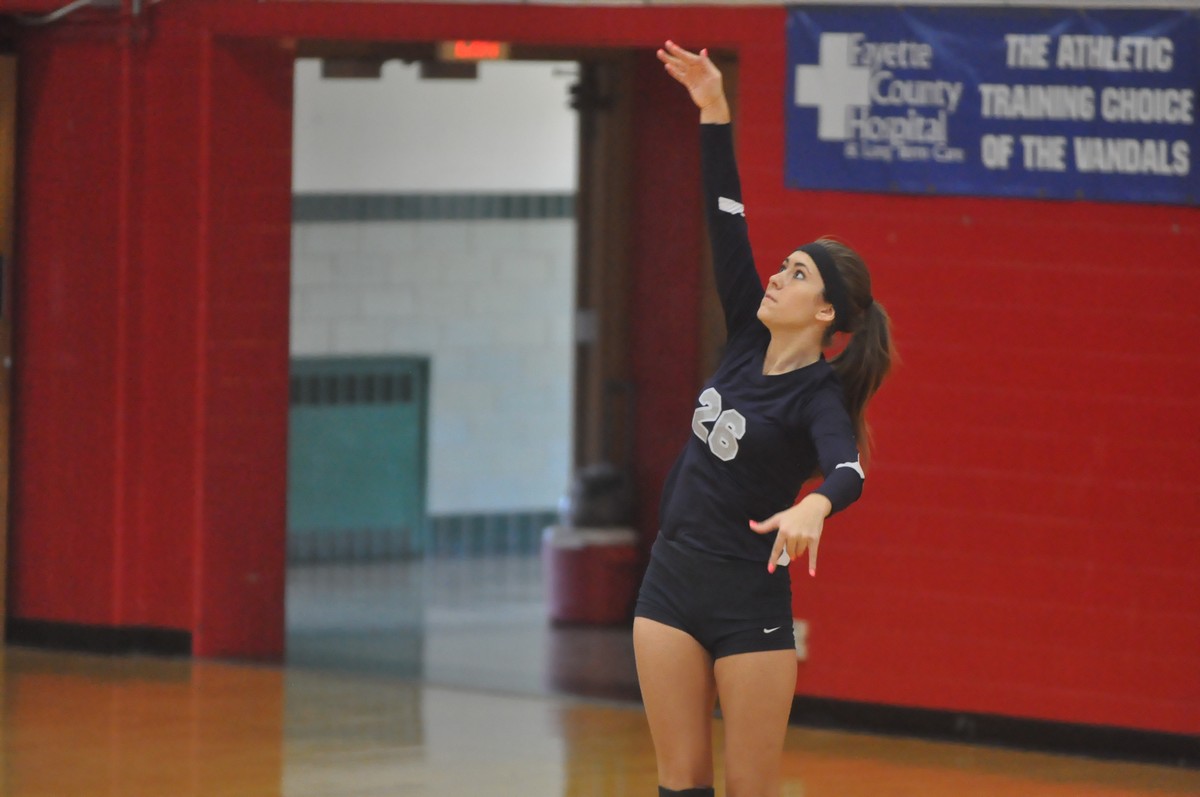 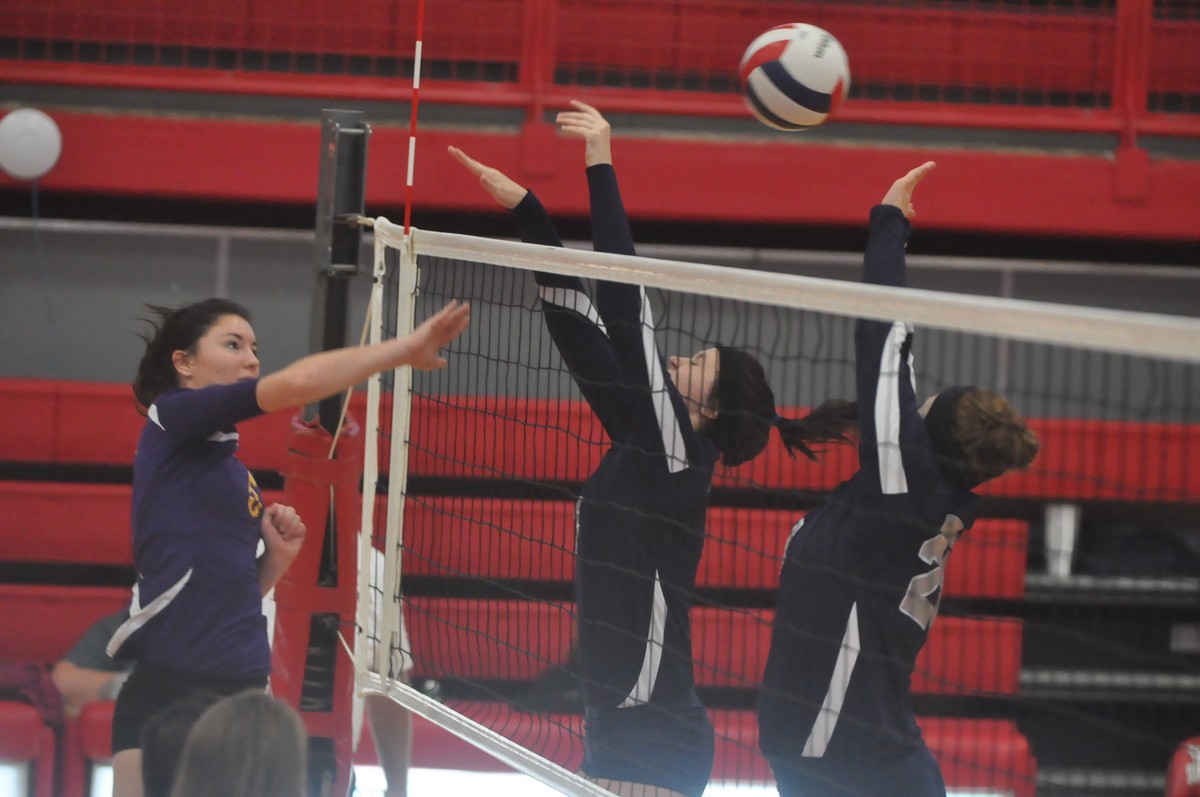 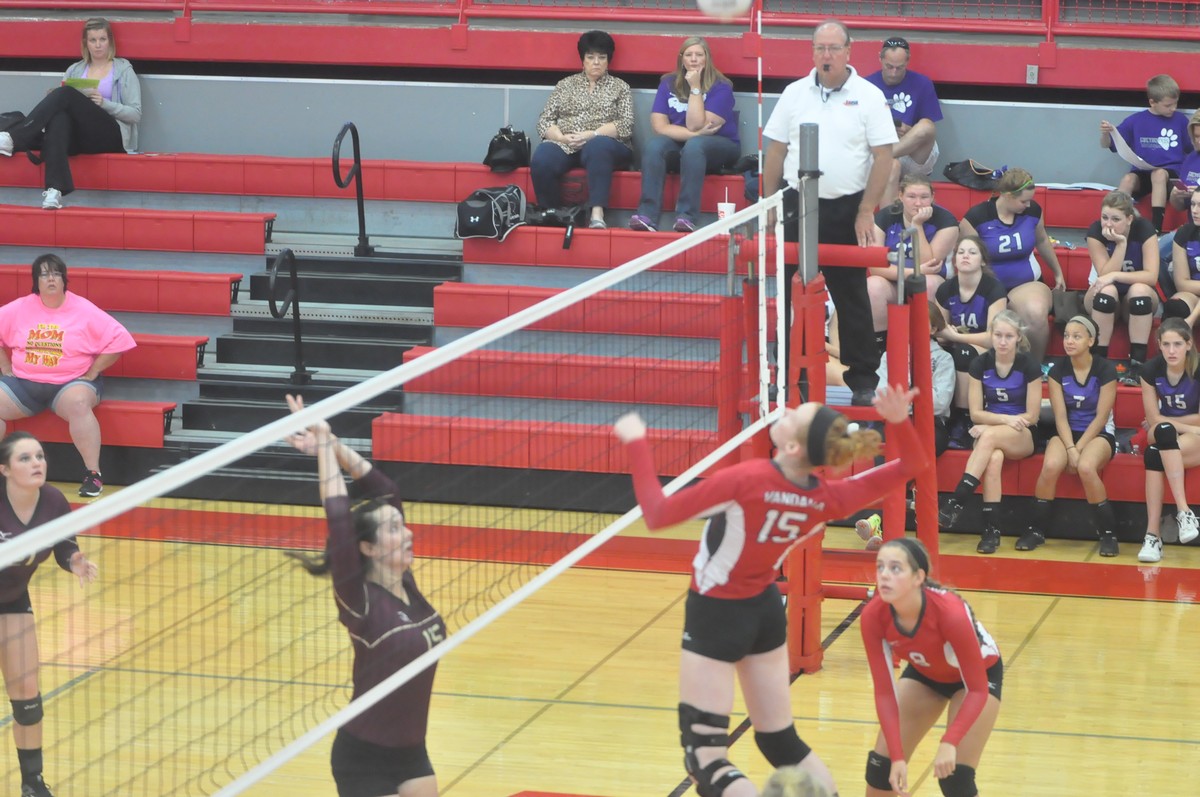 Vandalia’s Katie Tarkington slams home a kill during a match vs. East Alton-Wood RIver. Vandalia would go on to lose the match, 24-26, 25-17