After losing its first game, Post 95 rallied to score 48 runs in four games in the loser’s bracket, capping the comeback with a 13-3 win against Olney in last Friday’s double-elimination championship game.

“We all felt like we shouldn’t have been in the loser’s bracket in the first place,” said pitcher Clinton Hood, who allowed one hit in three innings of relief. “That motivated us to push through anybody who was in our way, and end up with what had been our goal all season.”

Vandalia picked up three other wins in must-win games earlier in the week, beating Robinson 13-6, Teutopolis 8-4 and Olney 14-2 after falling to Teutopolis 6-4 in the winner’s bracket.

“We thought we shouldn’t have been down there in the first place, but we battled through it,” said shortstop Johnnie Clift. “I feel like we played better in the loser’s bracket than we would have any other time.”

In the title game, Connor Beasley hit a three-run home run as part of a five-run first, Austin Schwarm had an RBI triple in a four-run fourth and Dylen Peters and Hood combined to one-hit Olney.

Olney was expected to throw ace Elijah Knepper, but elected to save him for the Division Tournament, which began on Tuesday.

Still, Vandalia (32-8) wanted to get an early lead in case Post 30’s coaches decided to enter Knepper late in the game.

“We thought they were going to come out and throw their ace, but they didn’t,” Clift said. “Either way, we knew we had to jump on them, because we heard their ace was coming in later.”

Clift slapped a hit-and-run single in between a pair of walks to load the bases with no outs in the first inning, and Noah Powless followed with a sacrifice fly to left.

Beasley then extended his hitting streak to seven games by blasting a three-run homer over the 355-foot marker in center, his third home run of the tournament and the team’s 20th of the summer.

“He came on right when we needed him,” said acting coach Rod Mueller. “We’ll be a man down going forward, so we’ll need him to step in.”

Beasley had hit in just 10 games prior to the tournament – instead serving as one of the team’s top pitchers – but stepped in on offense in all five tournament games, going 7-for-16 (.438), with four extra-base hits and seven RBI.

To finish the first, Brett Mueller walked and scored on a wild pitch to give Peters a five-run cushion.

Peters (4-2) picked up the win but struggled with his control throughout the game, walking six and hitting one in four innings. He did not allow a hit and struck out three, but was responsible for all three runs (two earned).

Runners reached scoring position in each of his four innings, but he stranded five runners on base – including men at second and third in the fourth.

“I told him, ‘Here’s what we have to do. If they are going to hit the ball, we have to let them hit the ball,’” Rod Mueller said. “He started throwing strikes, they started swinging at them and that’s what let us get out of his (fourth) inning.”

Brock Trexler walked to open Vandalia’s half of the fourth, and he scored on Schwarm’s second triple of the summer.

By scoring in the first inning, Schwarm extended his streak of scoring a run to 23 games, dating back to June 18.

“It seems like I get lucky a lot – I always reach on a bunch of errors and little bloopers that fall in,” he said. “The guys behind me are incredible. They keep hitting, hitting and hitting, and I just keep scoring.”

Schwarm scored three times in the game to give him 50 runs in 36 games played. He scored 11 times during the District Tournament.

Kyle Bray and Powless each walked to continue the fourth, with Bray scoring on an error and Powless coming home on a fielder’s choice by Mueller, who closed his season with the game and began Basic Training on Monday.

Hood relieved and struck out three in three innings. He allowed one hit – a double – walked two and hit two batters.

“I took it as if it was any other game,” Hood said. “I didn’t want to put any extra pressure on myself, so I threw like normal.”

Schwarm hit an RBI single in the seventh and Clift drove in a run with a sacrifice fly.

A balk allowed Schwarm to score, and Ryan Miller delivered a pinch-hit double to the left-center field gap to end the game on the 10-run rule and secure the championship.

“We had hitting. That’s all I can say,” Mueller said. “We hit strong pitches, and on off-speed, we took care of business.” 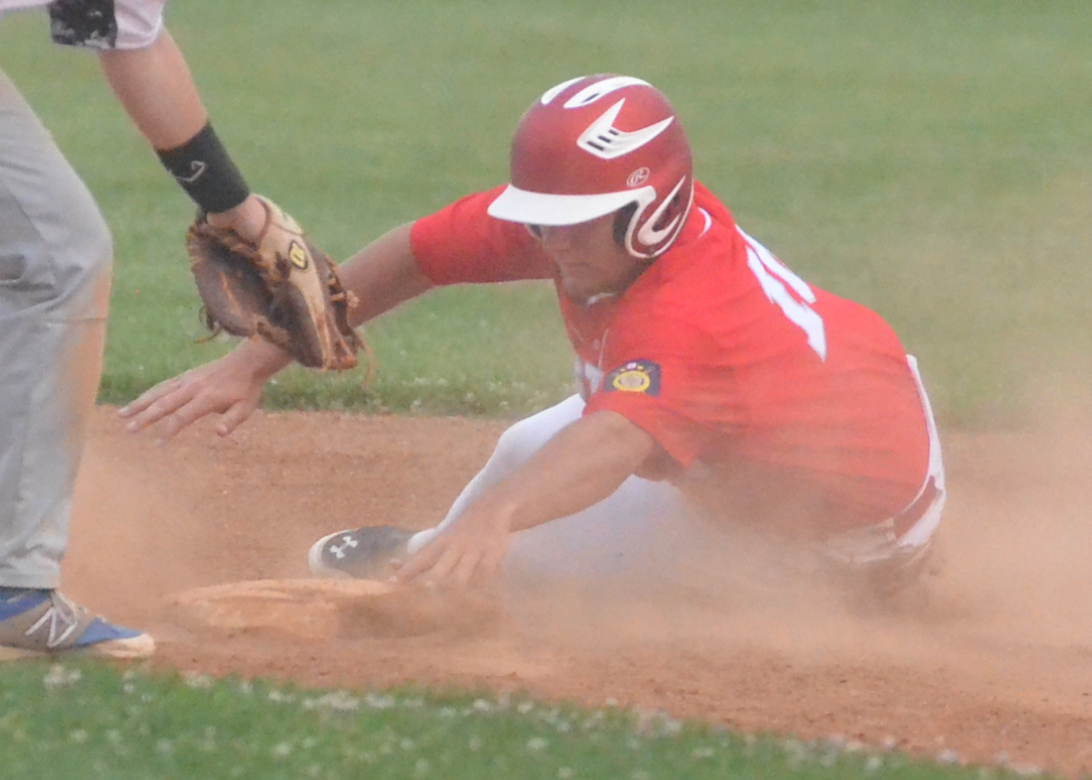 Brett Mueller steals the first of two bases during last Friday’s championship game against Olney. It was Mueller’s final game before leaving for Basic Training.