VANDALIA – It was a day to celebrate the seniors in their final home game, but it was a junior who stole the show despite a Vandalia loss.

All three seniors got a hit and junior Jake Stewart had another strong outing from the mound, but the Vandals fell to Hillsboro, 2-1, in eight innings in last Wednesday’s South Central Conference matchup.

“It was a tough one,” said coach Luke Hohlt. “We missed a few opportunities offensively.

Stewart, a soft-tosser who had 10 strikeouts in his last start, struck out another seven Hiltoppers in the loss, allowing two runs on just five hits and two walks.

The winning run scored with one out in the bottom of the eighth inning on a bases-loaded fielder’s choice.

Freshman shortstop Richie Well made a diving stop on the sharply-hit grounder, but did not have enough time to cut down the runner at the plate.

Location was key to Stewart’s success, as two-thirds of his 90 pitches were strikes. He also pitched himself out of a jam in the bottom of the seventh, forcing a third-out pop-up with runners on the corners. The Hiltoppers (3-14, 1-7 SCC) were the home team in the first game of a doubleheader because it was a makeup of a rained-out contest originally scheduled in Hillsboro on April 25

“Jake Stewart really gave us a fantastic chance to get the job done, and it’s too bad we couldn’t get a win for him,” Hohlt said. “He believes that he can go out there and pitch.

“He cares about this game, and that’s why we’re not afraid to put him out there,” he said. “He throws strikes and keeps guys off-balance.”

Ledbetter hit a sharp single up the middle in the fifth for his first hit in three games, and Beck scored on the play to tie the game at one after Hillsboro scored in the bottom of the first.

“It was a good day for the seniors,” Hohlt said. “At one point, we had four hits and they were all from seniors.

“They have stuck it out and played ball for me,” he said. “Those guys go hard, and that’s what you ask for.”

Freshman Alec Schroeder and junior Zach Schaal also had singles for Vandalia, which had won its only other extra-inning game this season.

VANDALIA – It was a nice night for baseball when the second game of last Wednesday’s doubleheader with Hillsboro began.

So the teams decided to play an extra inning for the second game in a row.

Vandalia got the winning run, however, as senior Matt Beck roped a walk-off double in the bottom of the eighth to score senior Colin Ledbetter and give the Vandals an 8-7 win.

Ledbetter led off the eighth with a single and was moved to second on a sacrifice bunt by junior Collin Nestleroad. Beck followed with a double for his only hit in five trips to the plate.

The Hiltoppers scored another three runs in the top of the fifth, but the Vandals answered with a pair of runs in the bottom of the inning on a two-run single by sophomore Tucker Willms.

Beck scored on a fielder’s choice in the sixth to force extra innings.

The Vandals have won three of five games since snapping a seven-game losing streak on May 1. 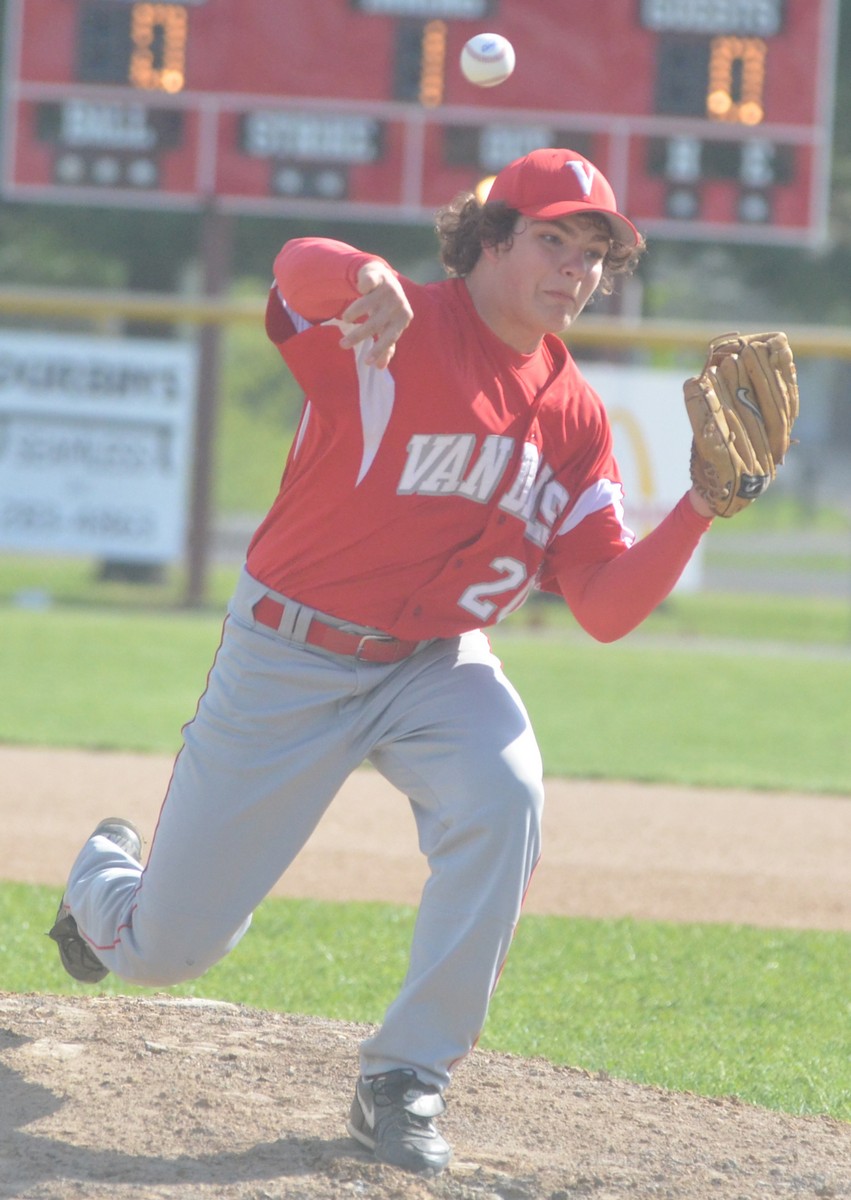 The Vandalia baseball team honored its seniors prior to last Wednesday’s doubleheader against Hillsboro. The seniors are pictured above with family members. The athletes, from left, are: Matt Beck, Carson Smith and Colin Ledbetter.