Ruckman scored as a courtesy runner in the bottom of the eighth inning, and Schaal pitched a five-hitter, striking out 11 Pana hitters over eight innings, for a 1-0 win in last Friday’s South Central Conference opener to give the Vandals their first back-to-back wins in more than two years.

“Hats off to Zach Schaal. He pitched a great game,” said Vandalia coach Luke Hohlt. “When you have a guy pitching like that, it would have been a tough, tough loss.

“Getting to be an upperclassman, he needs to be a competitor every time he is on the field,” he said. “He did that today.”

Schaal (3-0), a junior, was even more impressive when he got into a jam.

Of the five Pana batters who came to the plate with a runner in scoring position, three of them struck out, with two of those punch outs ending an inning. In his three appearances, Schaal is averaging 11.69 strikeouts per seven innings.

His performance easily could have ended in a loss, however, as Pana’s Kyle Gibson and Rhett Zahradka combined to strike out nine Vandalia hitters and allow four hits.

“Zach was around the plate and more precise with his location,” Hohlt said. “Those other guys will win some games in the conference, and it made for a tough pitching matchup today.”

Junior Collin Nestleroad collected three of Vandalia’s hits, including a well-placed bunt to lead off the bottom of the first inning, and senior Carson Smith singled in the fourth.

Smith’s biggest contribution was his weak grounder to the shortstop in the bottom of the eighth that allowed Ruckman to dash home for the winning run on a bang-bang play at the plate.

Ruckman came into the game as a courtesy runner after Schaal drew a walk to open the eighth, and he went from first to third on a fielding error on junior Jake Bowen’s grounder to second base.

“He is the first guy we are going to off of the bench (to run),” Hohlt said. “He has such a great attitude, too, and those are the guys you want in your program.”

It was the second straight walk-off win for the Vandals after beating Mulberry Grove 14-13 last Thursday, and the back-to-back wins were the first since a three-game winning streak from March 26-30, 2012.

With the toughest games on the schedule still to come, Hohlt knows that his team will need to find more offense early in games if it intends to have more winning streaks.

“We have a theme this week, where we want to build up a winning streak,” he said. “Our biggest thing is that we have to come out from the get-go ready to play.

“All of our wins (this year) have been come-from-behind wins, and you’re not going to do that every time,” he said. “When a good baseball team gets the lead, they’ll shut you down.”

Vandalia has been outscored 22-1 in the first inning of its six games this season, but has outscored opponents 24-6 from the fifth inning on. Of those late runs, 23 were scored in the four victories. 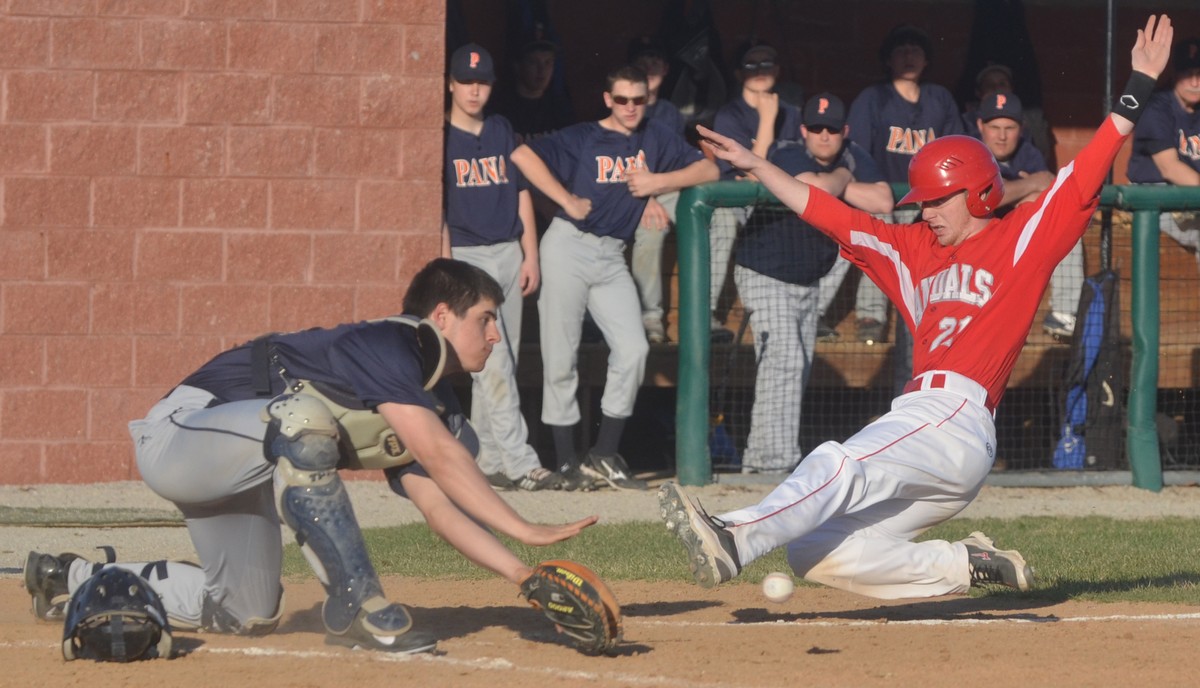 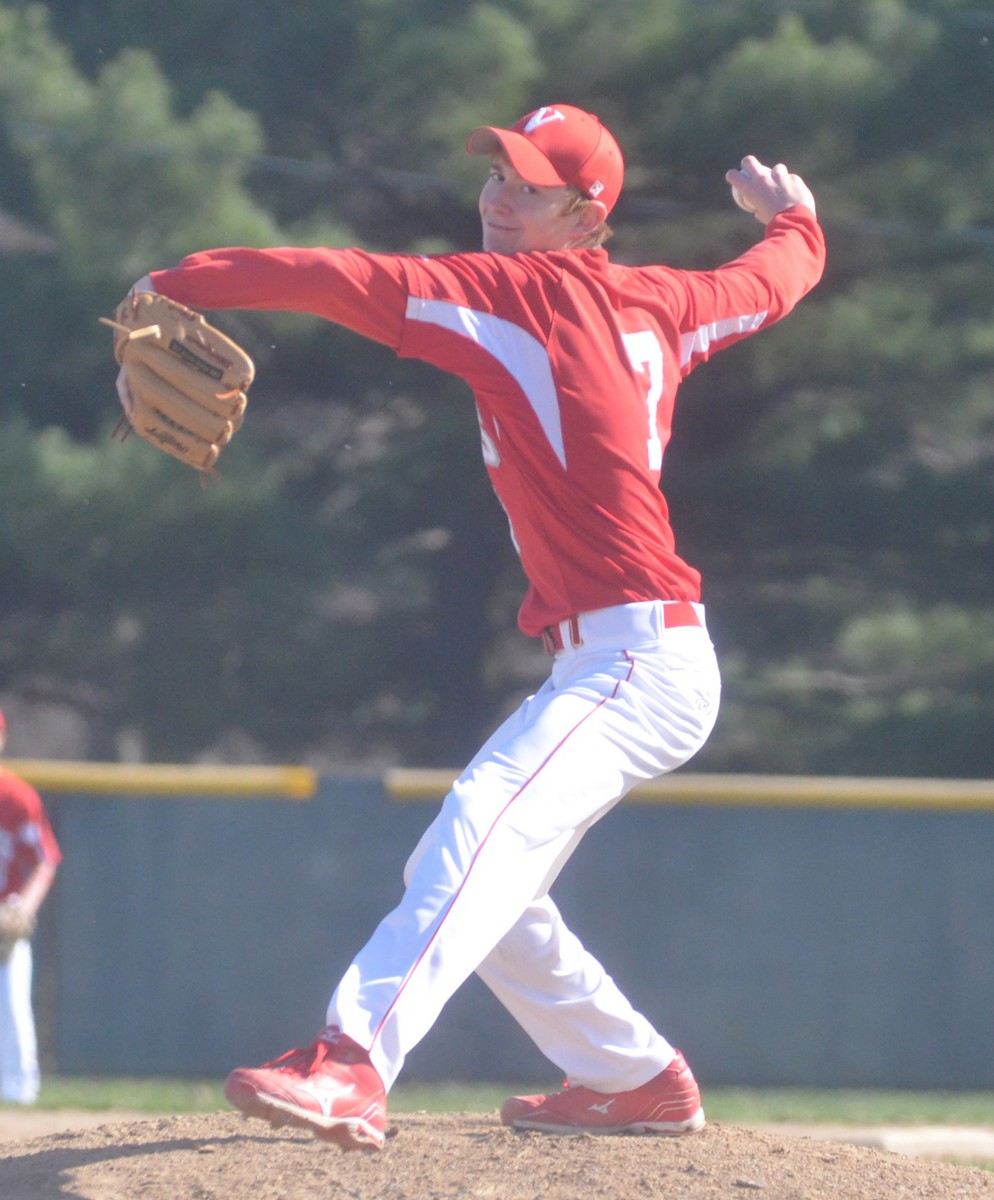 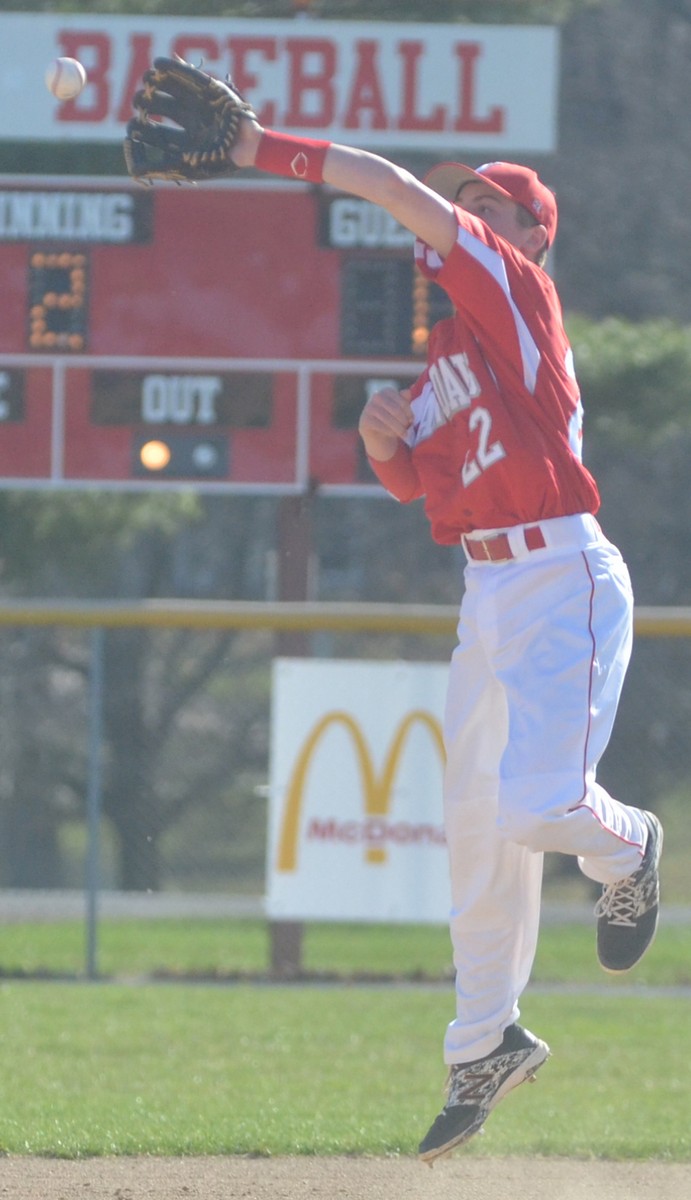 Freshman Richie Well leaps to make a catch on a fielder’s choice play in the game.