Short several players, the Lady Vandals had a rough go at Southwestern on Saturday.

Junior Megan Godoyo did not play due to her controversial ejection from the previous game, and seniors Abby Dugan and Haley Cothern were also out for the 63-34 Southwestern win in South Central Conference action.

Junior Randi Evans had a team-high four rebounds, her first four of the season, and freshman Karlie Bright had three steals for the Lady Vandals (2-4, 0-2 SCC).

Southwestern took control of the game early, scoring 23 points in the first quarter and holding a 38-18 lead at halftime.

Freshman Maddy Greeling had a game-high 19 points and seven rebounds for Southwestern.

It was the longest two seconds of the season, and it had disastrous effects.

The Lady Vandals lost their two best players between 1:14 and 1:12 left in regulation during a 62-60 overtime loss to Gillespie in the home-opener last Thursday.

Junior Megan Godoyo was ejected from the game on a controversial flagrant foul call with 1:14 left, and when play resumed, senior Amber Bruno was hit with her fifth foul of the game.

Godoyo’s elbow became entangled with a Gillespie player’s on a rebound with about 1:14 left in regulation, and after the Gillespie player did not release after being called for a foul, Godoyo tried to untangle the mess.

But her swing was too forceful, the referee declared, ejecting her without warning. The Vandalia bench was also assessed a technical foul for questioning the call, and Gillespie made three of the four free throws.

“How do you not give a girl a warning?” said coach Michelle McNary after the game. “Had that not happened with Megan and had Amber not fouled out, it might have been different.”

Prior to the technical free throws, Vandalia led 55-46, but over the final 1:14, Gillespie outscored the Lady Vandals, 11-2. Vandalia missed six free throws in that span.

The Lady Vandals made just 13-of-31 free throws in the game, a big reason why the Lady Miners were able erase an early 21-6 deficit in Vandalia’s South Central Conference opener.

“They were hitting some shots, and we weren’t,” McNary said. “We have to shoot better than 40 percent from the free-throw line, because they knocked theirs down, and we didn’t.”

On the season, Vandalia has made just 54.1 percent of its free throws.

Gillespie’s Alexis Burns hit a jump shot with 1.5 seconds left in regulation to knot the game at 57 and force overtime.

The Lady Vandals were outscored 5-3 in overtime, with two of those points being the final pair of freshman Madelyn Hosick’s career-high nine with two seconds left.

All of Gillespie’s overtime points came on free throws. The Lady Miners’ lack of field goals is why McNary said Vandalia was able to stay close, despite its top two players being on the bench.

“It’s very challenging, because they are the only two scoring for us,” McNary said. “We hung tough, because Gillespie didn’t score either.”

The Lady Vandals (2-3, 0-1 SCC) looked nearly flawless during the first quarter, with Bruno scoring 13 points, and the team pulling down 11 rebounds, including all but one on the defensive end.

Senior Morgan Whightsil had two of her season-high eight rebounds in the first period.

The margin didn’t waver too much over the next quarter and a half until Gillespie started pushing back with 3:19 left in the game. Over that final stretch, the Lady Miners outscored Vandalia 15-7.

“We don’t look to score at times, and there are times we don’t get to the open spots,” McNary said. “And our post players are not working hard enough inside.”

One of those players, senior Abby Dugan, missed the game due to illness.

She is counted on as one of Vandalia’s top bench players, and McNary said her absence was felt.

“She’s not going to score a ton, but she does what I ask her to and gets a few baskets here and there, so it hurt us a little not having her,” McNary said. “She has been doing a nice job coming off of the bench.” 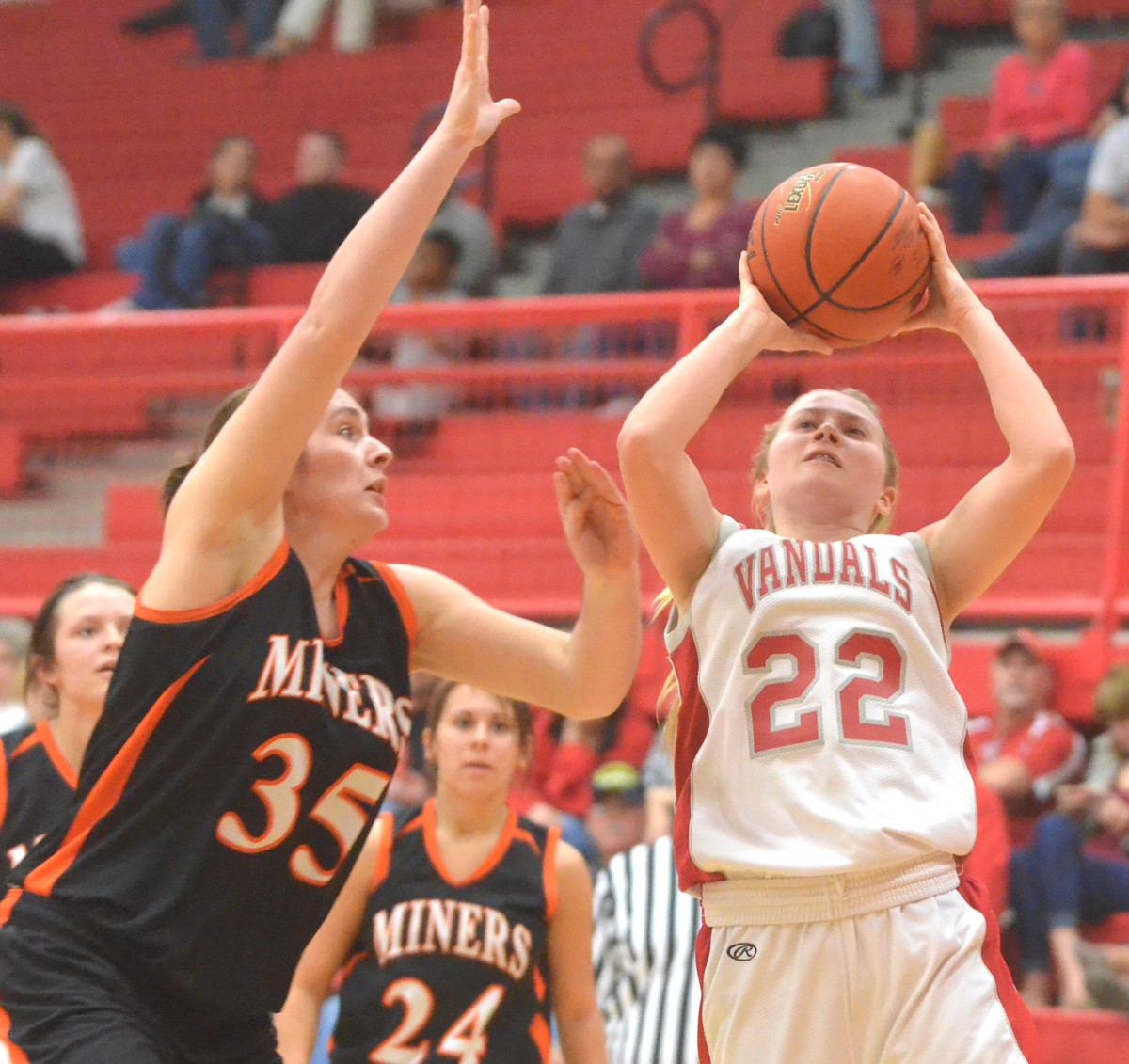 Senior Amber Bruno lays up two of her 25 points against Gillespie last Thursday. 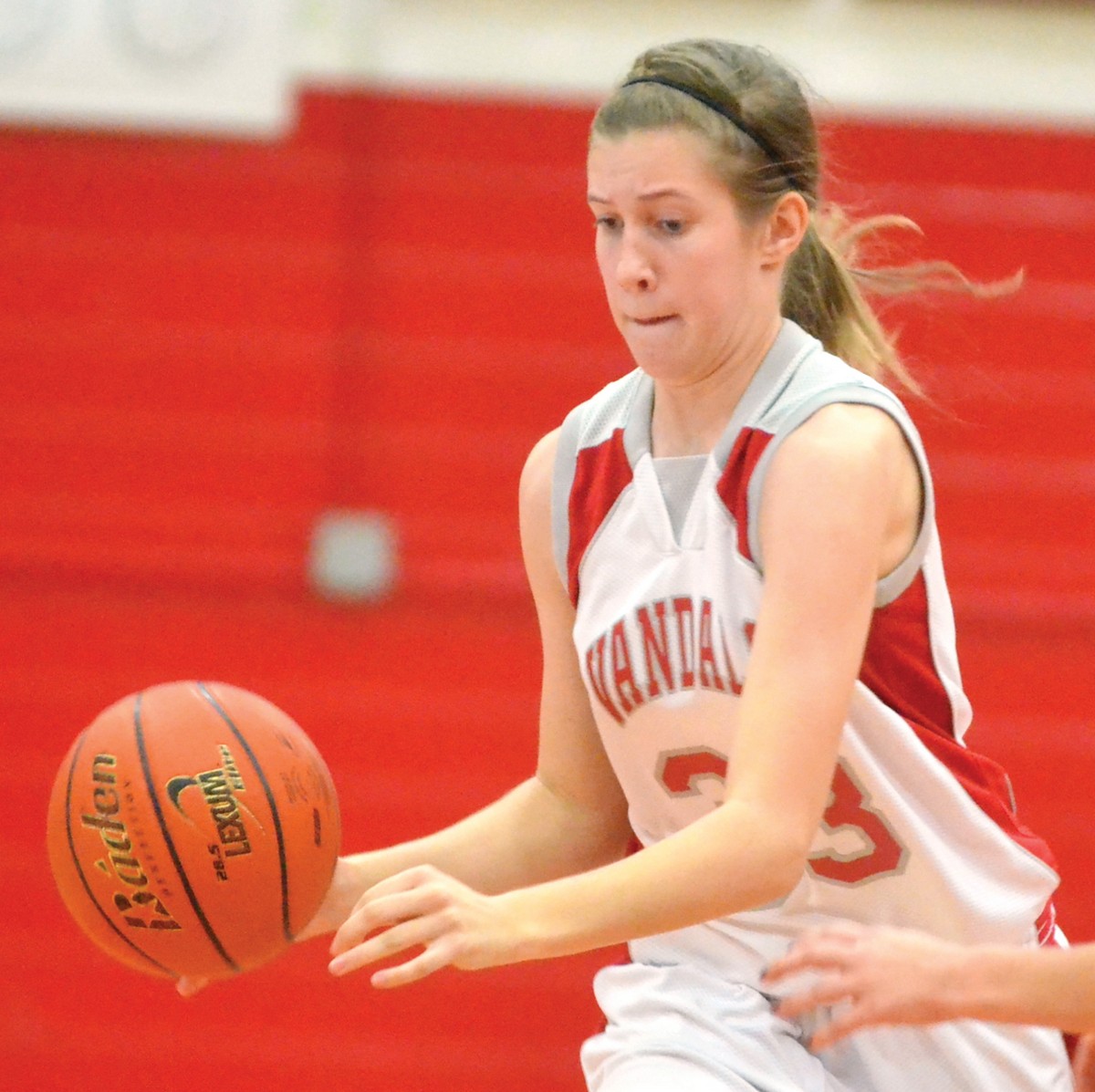 Though just a freshman, Makayla Tinker has provided balanced play off of the bench for the Lady Vandals. She is seen above moving the ball against Gillespie in a 64-62 overtime loss last Thursday.