VALMEYER – Arguably the greatest volleyball season in St. Elmo’s history came to a close on Saturday, with the Lady Eagles losing a tough Elite Eight battle to the hosts of the Valmeyer Super-Sectional.

Six seniors ended their careers with the second-most wins in school history (29) and the first-ever super-sectional appearance.

“I can’t really summarize what (the seniors) mean to the program and to each other,” said coach Elise Asher. “They are a good group, and they have left some pretty incredible footprints and raised the bar even higher.

“Their high school volleyball season is done, but they still have a lot to accomplish and achieve.”

The Lady Eagles (29-10) almost forced a deciding third set for the second straight postseason game, but when senior Savannah Feezel’s attempted her 350th kill of the season, Valmeyer was there to knock it back and give the Lady Pirates their first-ever state tournament appearance with a 25-15, 25-23 victory.

In the sectional finals last Thursday, St. Elmo used wins in sets two and three to secure the win against Lebanon.

“(My girls) fought until the end, and that’s all I can really ask for,” Asher said.

St. Elmo came out flat in the first set, falling behind 5-11 in the early going and never got within three points the rest of the way.

And the second set didn’t start much better, as Asher had to use an early timeout after her team fell behind, 3-0.

That gap would widen to 13-6, and it appeared that Valmeyer (30-9)  was going to have an easy cruise into the state tournament.

But it’s never a good idea to count out St. Elmo.

The team which used three sets in six victories this season got three kills in four points from senior Savannah Feezel to narrow the gap to 10-13.

On the next play, a net violation was called on St. Elmo, slowing the Lady Eagles'    momentum and changing the game.

Valmeyer built on the call to take a 16-10 lead, and the margin didn’t move until the Lady Pirates were ahead, 21-15.

After that, Valmeyer committed several errors in a row, and then a kill from senior Heather Seibert made the score, 19-22.

The Lady Pirates went back ahead, 24-21, and the jam-packed crowd that Asher said made for a “lion’s den” was itching to celebrate.

But a kill for senior Perry Manley and an attack error forced Valmeyer into a timeout before the final point.

Feezel led St. Elmo with nine kills, and finished the season with 349. Manley had 14 assists, and closed the year with 643.

Seibert, who had one ace in the match, led the team with 66.

It’s the 2003 team that holds the school record for wins with 31, and Asher said it’s very easy to define the two best teams she has coached. 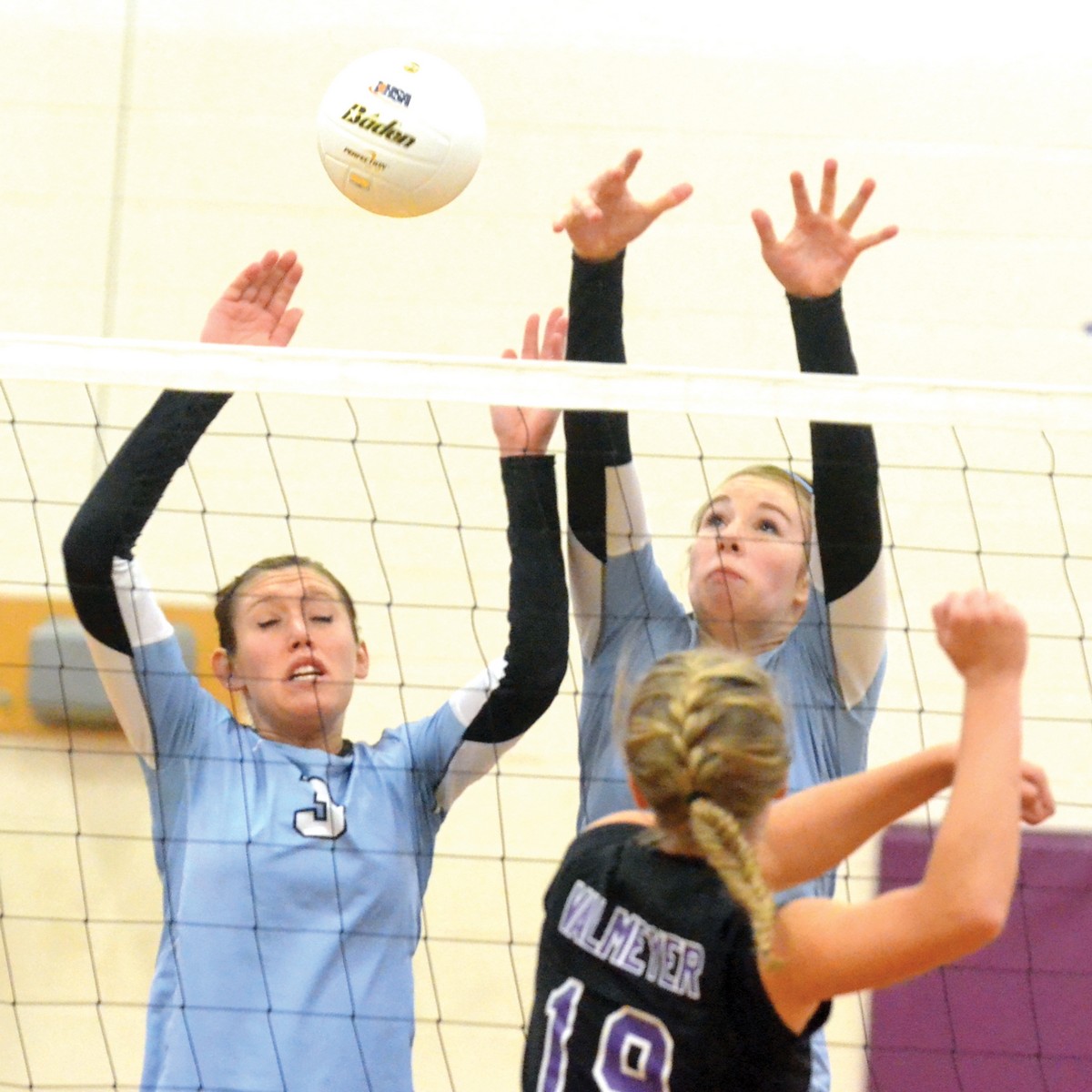 St. Elmo seniors Megan Maxey (left) and Savannah Feezel team up to deflect a Valmeyer attack during a Class 1A super-sectional game on Saturday.