ALTAMONT – Both St. Elmo and Brownstown were eliminated from the National Trail Conference Tournament after losing play-in games on Monday.

The losses leave both teams idle until next Tuesday, while the rest of their conference rivals will continue play in the tournament all week.

In the first game, it appeared No. 9 St. Elmo would beat eighth-seeded Beecher City for the second time this season.

Senior Garrett Buzzard and junior Jake Mansker each scored layups in the first 1:07 of the contest, and seniors Ben Sperry and Kase Stolte would add shots in the next minute to give the Eagles an 8-2 advantage.

Beecher City, however, slowly chipped away at that lead before connecting on a pair of free throws with one/tenth of a second left in the first quarter to tie the game at 15.

St. Elmo reversed that momentum in the second quarter, scoring two second-chance buckets in the first two minutes of the second period.

The Eagles held a 25-18 lead after Mansker made a layup with 1:18 left in the quarter, but Beecher City scored three baskets in the final 27 seconds of the half to cut St. Elmo's lead to 25-24.

The game remained close throughout the second half, but Beecher City came away with a 48-44 win.

The game had a much different feel than the last two times the teams played.

That was during the St. Elmo Holiday Tournament, when Beecher City surrendered 53 second-half points during a 77-65 loss in the semifinals.

The teams meet one more time this season at Beecher City on Feb. 15, which is St. Elmo's season finale.

A buzzer-beating attempt by No. 11 Brownstown did not fall, leaving sixth-seeded Stew-Stras with a 55-54 victory.

The Bombers trailed 15-11 after the first period, but sophomore Austin Hunter scored 12 of his career-high 24 points in the second quarter to help Brownstown cut its deficit to two at halftime.

Senior Zach Rigdon and Hunter combined to score 11 points in the third quarter, but the Comets extended their lead by one, due in large part to Zach Rincker's eight points.

But the Bombers persevered, holding Stew-Stras to 15 points in the fourth period, while Hunter scored eight more points to nearly lead Brownstown to a comeback.

As a team, the Bombers struggled from the free-throw line, making only 8-of-21 free shots.

The Comets also did well guarding senior Bryce Mason, who entered the game averaging 12.06 points per game, only to be held scoreless for the first time this season.

Rincker led the Comets with 15 points, while Austin Carson had 11 and Matt Tabbert added 10. 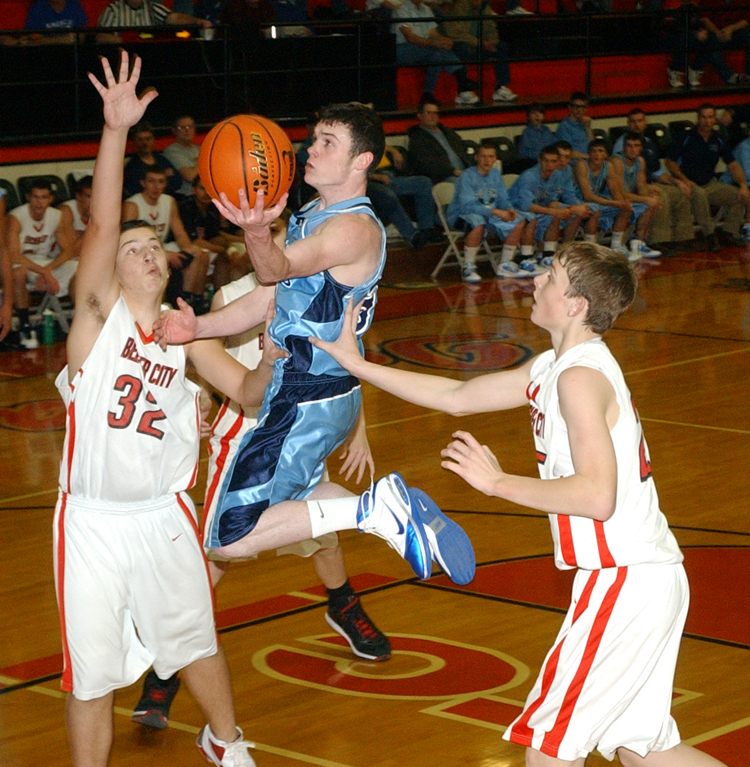 St. Elmo junior Jake Mansker floats to the basket in the first half of St. Elmo’s 48-44 loss to Beecher City at the NTC Tournament on Monday.