Gary Berg, a St. Elmo soybean farmer, was recently appointed by U.S. Secretary of Agriculture Tom Vilsack to be a director on the United Soybean Board.
Berg will serve as a volunteer farmer-leader for a two-year term and will represent his fellow soybean farmers.
He will invest soy checkoff funds in marketing, promotion and research projects to increase the profit potential of all U.S. soybean farmers.

The Illinois Department of Agriculture has designated the farm in Ramsey owned by Paul Sarver and Phyllis Sarver of Herrick a Sesquicentennial Farm.

A cover crop field day will be held from 9-11 a.m. next Thursday at the U of I Brownstown Agronomy Research Center.
Topics covered during the tour of research plots include:
• Species selection.
• Effects of planting date.
• Effects of planting method.
• Cover crops and crop rotation.
• Establishment challenges and successes.
• Factors contributing to a health soil.

The Bond, Clinton, Marion and Washington County Farm Bureaus, in conjunction with U of I Extension and county Farm Service Agency offices, are hosting an informational meeting on the implementation of the 2014 Farm Bill.
The meeting will be held at the Kaskaskia College Lifelong Learning Center on Nov. 18. A free meal will be provided at 6:30 p.m., with the program to begin at 7 p.m. The meal is being provided by the Kaskaskia College.

The U.S. Department of Agriculture is encouraging farmers and ranchers to make their voices heard by voting in the upcoming Farm Service Agency County Committee elections.
FSA Administrator Val Dolcini announced that the USDA began last Monday mailing ballots for the 2014 elections to eligible producers across the country.
Producers must return ballots to their local FSA offices by Dec. 1 to ensure that their votes are counted.
“The role and input of our county committee members is vital as we implement the 2014 Farm Bill,” Dolcini said. 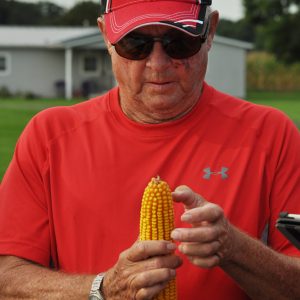 If the 24 men who canvassed fields throughout Fayette County last week were on target, and they traditionally are, county farmers can expect pretty good corn and soybean yields this fall.

Scattered showers continued throughout the state for the week ending Aug. 17. The Southeast part of the state received nearly 2 inches of precipitation,  while the Northwest received one tenth of an inch.
There were 5.3 days suitable for fieldwork, which allowed farmers time to cut hay.
Statewide, precipitation averaged 1.04 inches, 0.15 inches above normal.
The average temperature was 69.4 degrees, 4.4 degrees below normal.

Soil moisture levels in southern Illinois increased over the weekend as the region saw more than 3 inches of rain at some locations, according to Jennie Atkins, Water and Atmospheric Resources Monitoring (WARM) program manager at the Illinois State Water Survey, Prairie Research Institute, University of Illinois. 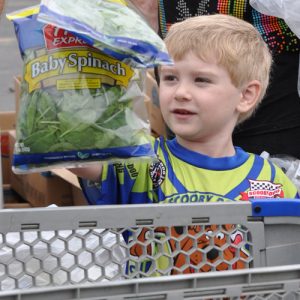 The Central Illinois Food Bank was in the parking lot of Pinnacle Foods in St. Elmo on Saturday.