“A true test of will.”
That is how ESPN describes the event known as the Spartan Race, and that is exactly what 43-year old Vandalia native Tony Alstat has demonstrated over the past three years.
The Spartan Races, which began in 2010, are split into three different types: The Sprint, which is the shortest, contains more than three miles and 20 obstacles; Super, which covers more than 8 miles and 24 obstacles; and the Beast, which is the longest at more than 12 miles and 30 obstacles.
"A lot of Spartan races are held at ATV parks, hunting lodges, or ski resorts, so the terrain is an obstacle itself.  There are a lot of hills, a lot of steep hills and a lot of running through the woods.  There are water obstacles, such as creek crossings, but I've also done one that required us to swim across a lake,” said Alstat.
As if it’s not hard enough to complete one of these courses with a variety of obstacle courses, the racers are not given knowledge of what obstacles they will be faced with before they actually arrive to the event.
“Joe DeSena, founder of the Spartan Race, in his book says to expect the unexpected, so that is why they do not put the course map out,” said Alstat. “Once the race starts, you just start running and whatever obstacle presents itself, tackle it head-on.”
While he began competing in 2012, his interest in physical fitness is something he has always carried. The 1990 Vandalia High School graduate participated in football, basketball and baseball.
In 2010 he began doing Crossfit, a combination of cardio training with strength training. From there, he started to get involved in 5K runs, but he felt he was better suited for something with more variety, obstacle runs.
“I'm not exactly built for speed in a 5K, but the combination of cardio and strength training is ideal for obstacle course runs,” Alstat said.
He participated in his first obstacle run in 2011, the Warrior Dash in Missouri. It was there that his interest took off and led to his first Spartan Race.
“A guy there (Warrior Dash) at the starting line started talking about a Tough Mudder run, and I had never heard of a Tough Mudder,” Alstat said. “When I got home, I started looking some of these other races up online, and found there was quite a few different ones, including Spartan runs.  The following spring of 2012, I did my first Spartan in Indiana.”
While Alstat began competing in Spartan Races back in 2012, he has steadily increased the number he participates in each year. In 2015 he has completed 12 races (four Sprints, Supers and Beasts), earning him four trifectas. A trifecta is a combination of one Sprint, one Super and one Beast.
His increased involvement has made him find a way to balance his everyday life, working as a correctional officer at Vandalia Correctional Center, with training for the grueling events.
“I make preparing for Spartan races a part of my everyday responsibilities.  I either go to the gym or run on a daily basis.  I follow a healthy eating regimen, so meals are centered around healthy choices to stay in shape,” Alstat said. “It’s a lifestyle choice, going to the gym and eating healthy, but when you are dedicated and committed to a cause, it's an easy choice to make.”
While Alstat has been competing in the events consistently for the last the three years, the only thing that has gotten easier for him has been the preparation.
“From my first race to now, I have learned a lot of the little things about the sport of obstacle racing,” Alstat said, listing a variety of things that include the right shoes and right clothes to wear, how to properly hydrate and the proper eating regimen needed to properly fuel for the race.
“The runs don't get easier, because every run is unique, but with a few years of doing them, how to prepare for the runs is easier,” Alstat said.
While the variety of obstacles ranges between each event, the difficulty of certain obstacles ranges as well, citing that rain and mud from adds to the challenge.
The intense physical challenge in completing these courses is very apparent, but there is also equally tough mental challenge in pushing yourself to finish a Spartan Race, Alstat said.
“In the longer races, you have to keep mentally telling yourself to keep moving…your body is physically able to do a whole lot more than what your mind mentally tells it to do,” Alstat said. “Your mind wants to quit, but you mentally have to keep going, knowing you can do it.”
Alstat earned his fourth trifecta this past weekend, completing the Sacramento Super/Sprint. Alstat is determined to continue improving.  He wants to move from competing in the open waves, which are for anyone who comes out and pays the entry, to competing in the elite waves, where all the runners are trying to compete for the best time.
He participated in his first elite event at the Nashville sprint on Oct. 10, finishing third in elite masters (over the age of 40).  All in all, Alstat has continued to improve since getting involved with Spartan races in 2012 and it doesn’t appear he will be slowing down anytime soon. 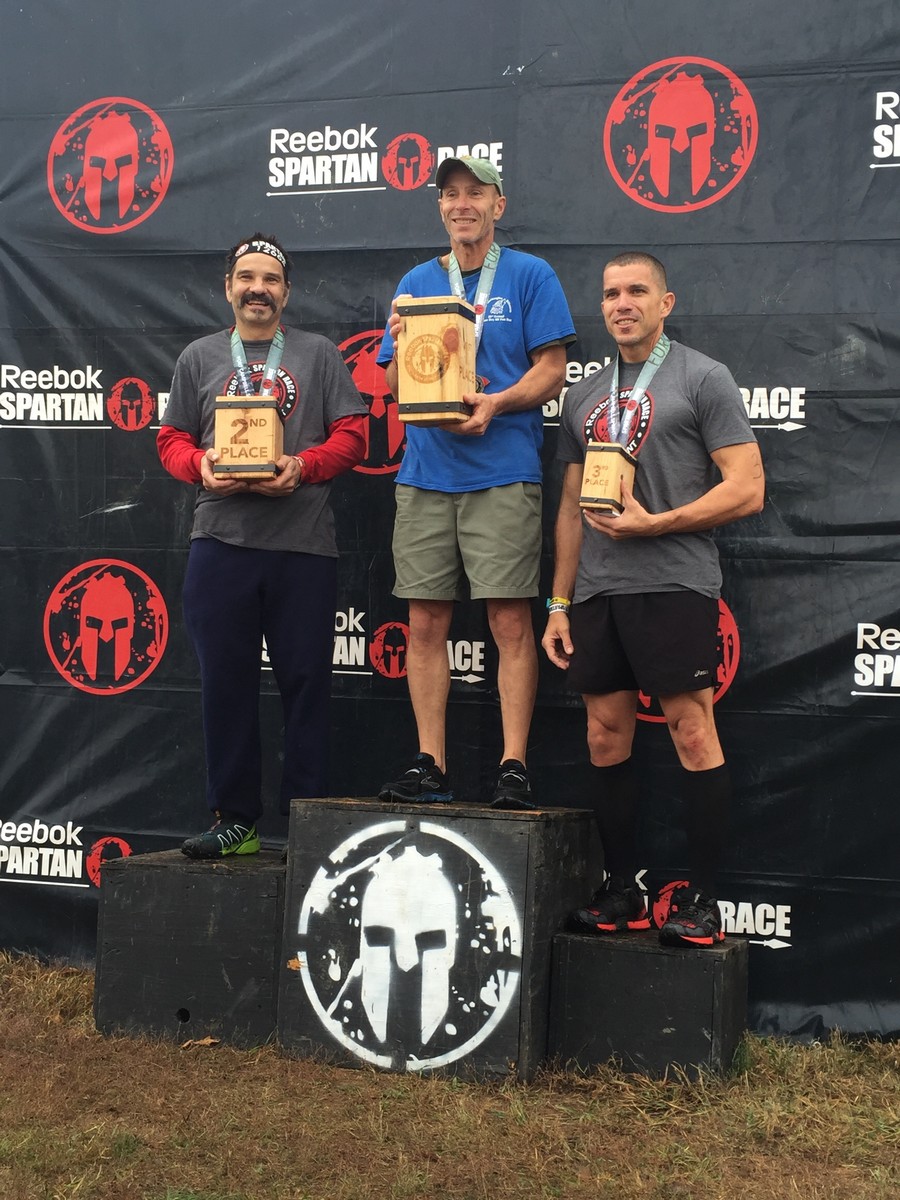 Tony Alstat (right) finished third in the Elite Masters (over the age of 40) at the Nashville Sprint.