The Vandalia men’s fast-pitch softball team, The Freight, reunited over the weekend at the ASA wooden bat tournament in Forsyth, dropping a trio of competitive games.
Having officially retired in 2009 and being inducted into the American Softball Association’s Hall of Fame in 2011, the expectations and approach were not quite the same according to head coach Rich Well.
“Now that our kids are getting old enough that they are interested in playing some, it’s more of a family reunion type weekend for us,” Well said, “to get together and see each other on the same weekend, sit in the dugout, play a little bit and get our kids involved a little bit.
“It’s a little bit of a different approach than when we played full-time. The wooden bat is something different, because of safety,” he said. “The wooden bat is a safe environment for us to play our competitive game.”
The Freight opened the tournament against Coors Light Teutopolis,
Bryan Hobbie and Bob Nagel came around to score in the first on RBI’s from Greg Nagel and Joe Dileo to provide a 2-0 lead.
Teutopolis answered with two in the bottom of the first, but The Freight’s Alan Meinhart was able to hold Teutopolis scoreless over the next couple innings.
However, two more runs, in the fourth and fifth, proved to be too much to overcome as The Freight lost, 4-2.
The Freight fell behind 3-0 after six innings to Ramsey Financial out of Bowen,
Vandalia struggled to get any offense against a younger pitcher, something Well said was nice to see, given the relatively low interest from younger kids in playing men’s fast-pitch softball.
“(On kids/younger siblings of players continuing the team), that’s kind of the way we are looking at it is, because we try to play every year,” Well said. “The biggest thing is pitching. The one sad part about it is we did see a young Argentinean pitcher in the second game (which is good), but a lot of the pitchers in this wooden bat tournament were the same people who were pitching when we retired eight to nine years ago.
“There needs to be some development in youth pitchers, so, hopefully, some of our kids might get interested once their baseball careers are over.”
Down 3-0, The Freight was able to mount a comeback, tying the game in the bottom of the sixth.
Ramsey Financial took the lead in the seventh, but The Freight was able to tie the game once again with a bases-loaded RBI walk by Nick Casey, scoring Kurt Hickenbottom who led the inning off with a single.
After a scoreless eighth inning, Ramsey Financial managed one run in the top of the ninth as they hung on for extra-inning win, 5-4.
The Freight closed out the tournament against McMahon Meats out of Teutopolis, failing to score a run as they were defeated, 1-0, finishing the tournament 0-3.
Despite the 0-3 showing, Well chalked up the tournament as a good chance for the two-time ASA National Champions to stay in touch while introducing some of their kids and younger siblings to the game.
“That’s the exciting part for us, because we had 21 people that played,” Well said. “We had 10 or 11 of our former players and then nine or 10 siblings and kids of players. It’s a different experience for them. It's something that 30 years ago, there were teams everywhere and people played it all the time. In today’s world, there are just not a lot of teams in fast-pitch anymore.
“It’s a little bit of a different game,” he said. “Bases are a little shorter, pitchers mound is a little shorter and the ball goes up and down, as opposed to baseball where the ball just goes down and across.
“It’s a little bit different, but there are things, though, that do correlate that transfer from baseball to fast-pitch, as those kids get older.”
With the original roster of The Freight getting older and unable to consistently play, Well hopes the younger players; continued involvement in the summer tournament might spark further interest to bring the team back at some point.
“Some of the those kids are thinking about that being an option for summer activity after they get out of high school and college,” Well said. “(This tournament) gets our guys a chance to stay connected to the game, because it gave our group a ton of experiences.
“We got to play all over the United States – we played in Canada at the world tournament, so it is a chance for our older guys to stay connected without having a full-time commitment.”

Greg Nagel makes a throw after fielding a ground ball at third base during game three of the ASA wooden bat tournament in Forsyth Saturday afternoon. 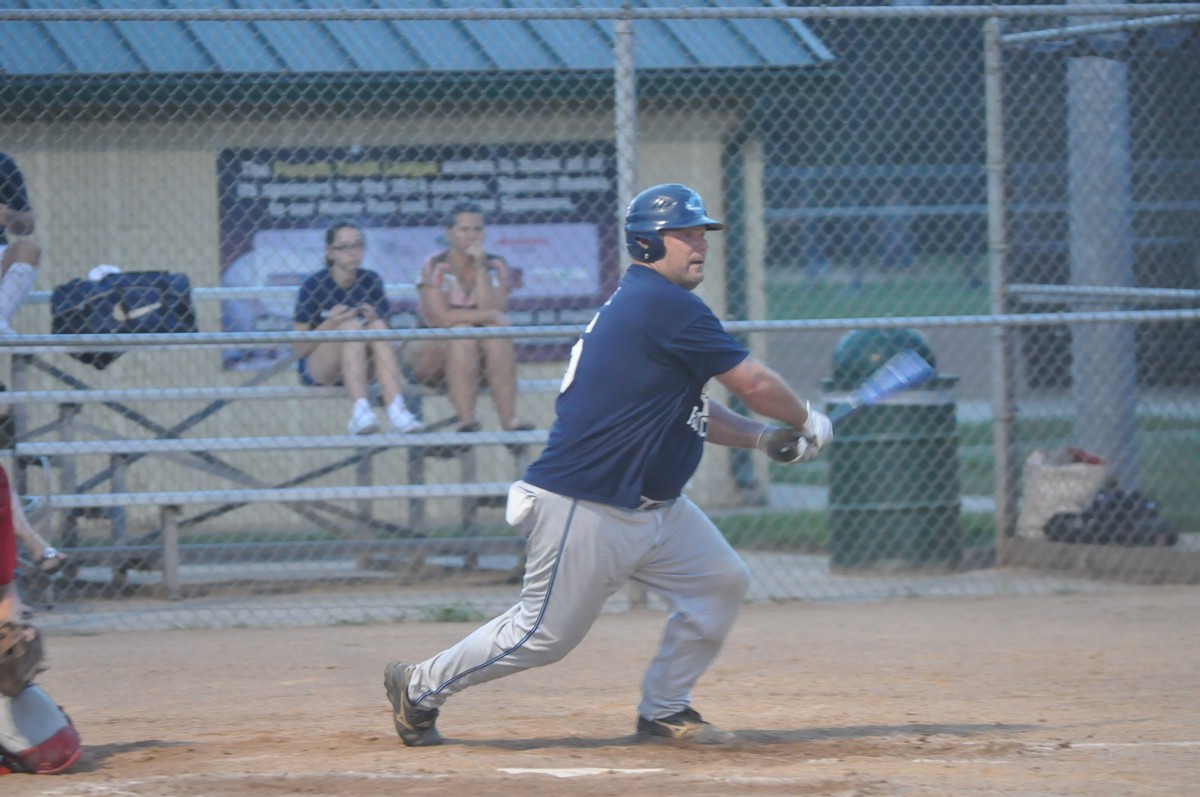 Coach and player Rich Well connects for a single to the right side during game one of the ASA wooden bat tournament Friday night. 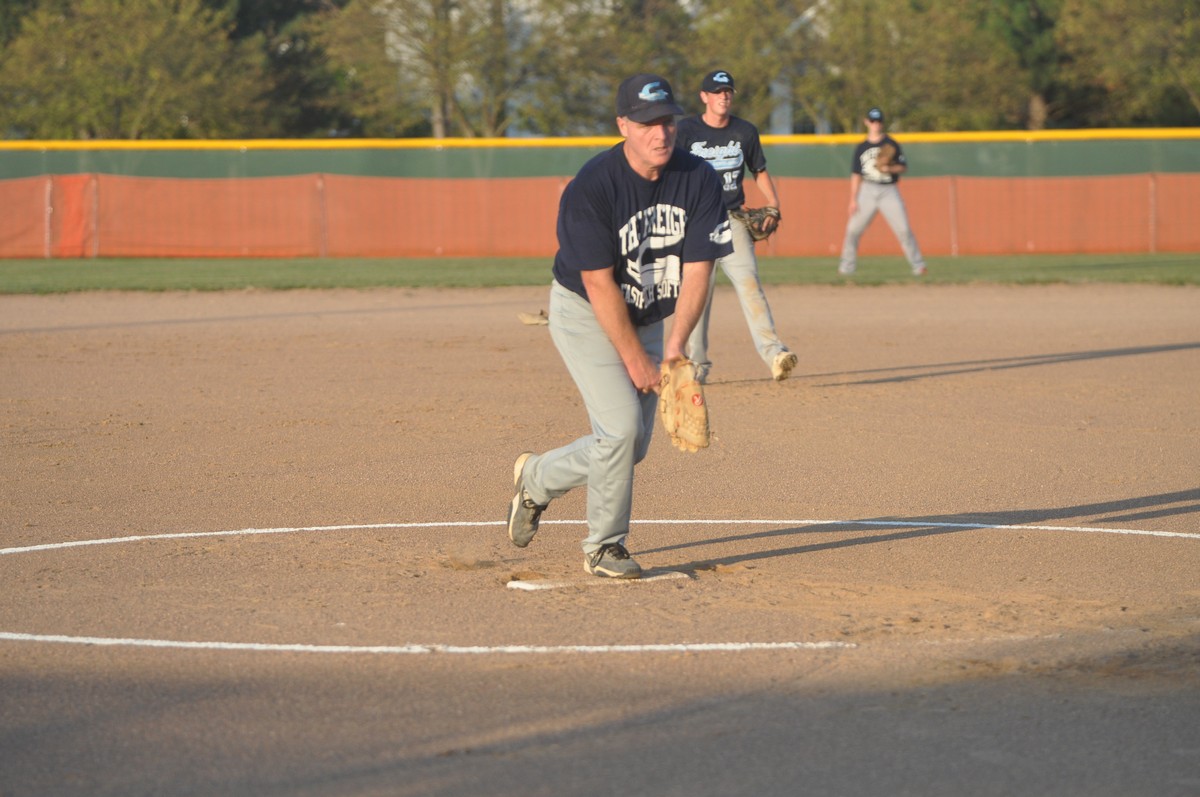 Alan Meinhart delivers a pitch during game one of the ASA wooden bat tournament in Forsyth Friday night. 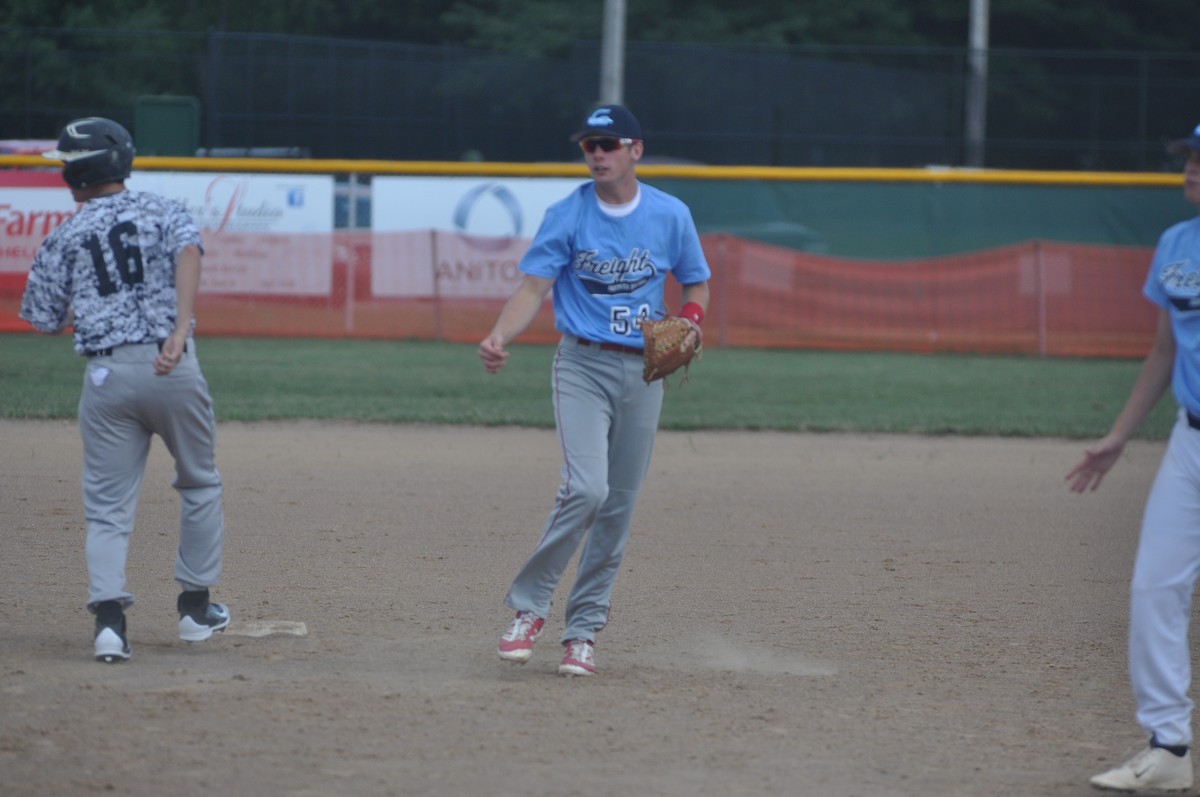 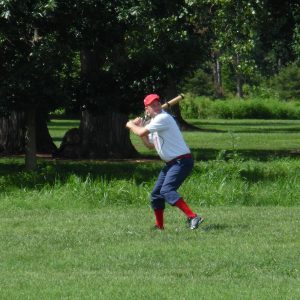