By Charlene M. Jett
What a present we had today from Evergreen Outreach, a huge blessing named Harold Swofford. As our main entertainer, well more about him later!

Our normal meeting was lead by Beulah Brown and our pianist was Bette Stolte (also known as D.F.=dynamite fingertips). We sang our welcome and Outreach songs, and sang “Happy Birthday” to Edith Simmons, Melvin Pyle and Mary Nabor.
Now, Beulah started everything off with big thanks to our ancestors for giving us the Declaration of Independence and the Fourth of July (1776) to celebrate. She spoke about how proud she is to be an American and how she treasures her liberty and freedom. Unspeakable gratitude is the best way to describe her emotions. We all share this gratitude for our most treasure gift.
This was followed by devotions I took from the First United Methodist Church Sunday school lesson book published by Cokesbury. I briefly spoke about the prophet Micah, who was given the really tough challenge by God of delivering criticism to the Israelites. God was not happy with the corruption in politics and in the church, he was very angry. But the Israelites didn’t want to hear it and were not nice to Micah.
Micah even predicted the fall of Jerusalem, but missed the timing as he thought it would occur in his lifetime. God wanted the corruption to end and wanted the Israelites to pray for forgiveness of their sins and go back to loving Him. This is what he wants all of us to do, here and now!
Harold Swofford of Mulberry Grove does karaoke. This means he comes with microphones, speakers, amplifiers, a screen, a large electronic box for volume control, etc.
A bit about Mr. Swofford – he is a real country singer with just the right amount of twang and tremble in his voice, just like Hank Williams had. He has a deep base voice and likes the slower rhythm songs.  He occasionally can fit in a yodel and has very good control and projection.
Among the favorites he sang were “Digging up Bones” by Randy Travis, and “Blue Eyes Crying in the Rain” by Willie Nelson. I felt Harold is at his best with his two Hank Williams songs,  “Half as Much” and “I Can’t Help It.”
An all-time favorite that brought lots of smiles and claps was “Move it on Over” (which describes all the types of dogs (men) in the dog house (fat dogs, skinny dogs and mad dogs) – a very funny song!
Kinda fits with the devotion about the warnings from Micah!   One of the great hits ,“Detroit City” by Johnny Cash, was delivered with heartfelt emotions. It is also known as “I Wanna Go Home.”
Now, Harold knows the emotional keys to all the country songs that are focused on loneliness, heartache and sometimes not really wanting to know the truth, because it hurts too much. Exactly like God did!
One of my all-time favorite songs, “I’m Movin’ On,” which starts “See that big eight-wheeler moving down the track, means my true lovin’ daddy ain’t coming back, I’m a moving on.” I just loved it!  So glad you chose this one to sing – I have the fondest memories of it! Although our hands were clapping to many of the songs, my feet were not containable as he sang” Could I Have This Dance.” I was suddenly transformed and imagined myself in a fancy ball gown and glass slippers. Now, this brief interlude only lasted about three minutes, until I stepped on my tennis shoes. But what a fine moment we had!
Mr. Swofford gets a big “hats off” thank you from Evergreen Outreach.
As pinochle games go, Richard Krunenegel/Susan Meador won one game and Rosamund Hobler/Shirley Locke won two games, which was fairly close tpnormal.  Regardless of the scores, I know they had a very good day!
God Bless everyone – hope to see you next week! 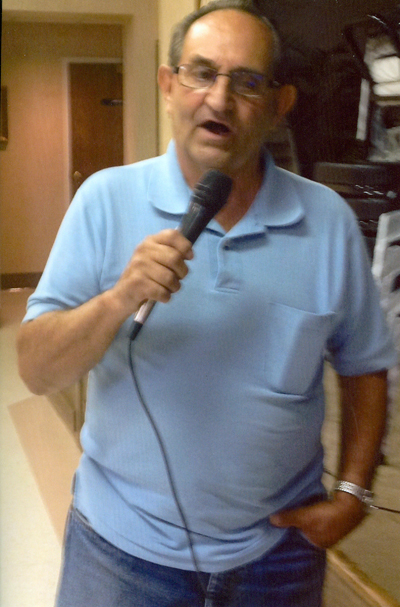