I have been hearing for some time now that the Mark Greer Hospital building, the “Old Hospital,” was slated for demolition as the hospital board searched for more space.

As more property is purchased in the vicinity of the hospital proper on Sixth and Eighth streets, the demise of the nearly century-old building seems more eminent.
Built in 1925, the Mark Greer Hospital holds many memories for many people. I was one of the 6,000 babies born there between 1925 and 1955, and during my high school years I volunteered there when it was a nursing home.
In a June 1973 newspaper interview to celebrate his 60th anniversary in medicine, Dr.
Mark said that new doctors had moved to town, including Dr. Ecke and Dr. Weiner in the medical field and Stanley Moore, a surgeon, and the idea for a hospital grew.
At the time the spot was chosen, this northern part of Vandalia was beginning to grow.
Dr. Mark built his home across the street in 1929, and later still, his brother, Dr. Miller Greer, built his family home just east of the hospital.
Within nine years, the need for more space was evident, and Dr. Mark financed a 15-bed addition to the building with an operating room, obstetrical room and reception room.
With his brother, Dr. Miller Greer, the two ran the hospital for 29 years. Dr. Mark’s wife,
Iris Klasing, a local girl and a nurse, also assisted in the hospital.
As years advanced, Dr. Mark once again saw the need for more room and began to study ways to fund a new hospital for Vandalia.
He studied the laws governing the hospital situation, and found ways through the Hill-Burton Act to raise money for the project.
A hospital district was established and a nine-member board put in place.
Between 1949 and 1955, the board planned and built Fayette County Hospital at a cost of $1.6 million, using funds from the Hill-Burton Act. Ours was the first air-conditioned hospital in the United States.
The Fayette County Hospital District bought Dr. Mark’s interest in the “old” hospital and converted it for use as a nursing home.
In 1971, with a new 92-bed nursing home addition to the hospital, the old building found another use, as offices for doctors and more recently as the Center for the Senior Renewal Program.
The Mark Greer Hospital building, as well as the Fayette County Hospital, stands a lasting tribute to Dr. Mark Greer, who saw a need and answered it. 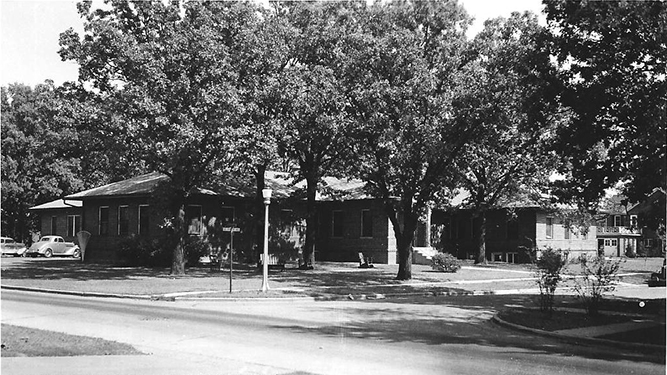