The fact that Vandalia’s school buildings are, for the most part, empty doesn’t mean that students’ work in the final quarter of the school year has ended.

Instead of being in the classroom with their teachers, students are either using their district-provided laptop computer or using paper worksheets in their homes.
Students have been continuing their education through eLearning off-site since schools were closed as part of Illinois Gov. J.B. Pritzker’s shelter-at-home order.
For at least the time being, that shelter-at-home order – and the closure of all Illinois schools –runs through the end of this month.
It’s been a period of adjustment for all in the district, and Superintendent of Schools Dr. Jennifer Garrison said that all things considered, the alternative learning system is working well.
Students in grades 2-12 are using their district-provided Chromebooks for their schools, and those in pre-kindergarten through second grade – as well as those who do not have Internet access at home – have been picking up packets from their teachers.
District staff and volunteers, Garrison said, “are using social distancing” to get those packets to students.
“We’re wearing masks and all of the teachers have everything prepared. They pull up in the circle drive (at VES) and we walk it out,” she said. “We’re doing the same thing for junior high and high school students who don’t have online Internet access.
Garrison reported that at last month’s school board meeting that on the first day of the new, alternative system, there was some anxiety amongst some students and their parents.
But, since then, “It seems that things are going well, considering the situation,” Garrison said.
One adjustment that has been made from the start, she said, is “we cut back from the required five clock hours to differentiate between the three buildings (elementary, junior high and high school), with primary being 45-90 minutes at the maximum to the high school maximum of three hours.”
The off-site learning, she said, “We know it’s not as effective as having our students onsite with a teacher.”
“So, when we do come back, we’re talking about a transition, having a learning-loss or learning-recovery plan,” Garrison said.
“But, to do that, we’ll have to assess where each individual student is in his or her learning and going from there,” she said.
At this time, school officials in the state are just waiting to see whether students will get back in the classroom this school year.
“The big question is, when will the governor decide if we’re coming back in May or not,” Garrison said.
Even if the learning process continues as it currently is through the end of the school year, the decision has been made to hold a graduation ceremony for this year’s seniors at Vandalia Community High School.
As to anything else, including extracurricular activities, Garrison said, “I have kept every single event on my calendar to potentially look at rescheduling.
“It’s the question that nobody knows the answer (about the rest of the school year),” she said.
“If it’s May (when school resumes), it’s more likely that we can reschedule more events. If it’s August, then most likely we’re looking at graduation only,” Garrison said.
The state has given school districts some direction, but, for the most part, it’s up to the districts to make decisions on eLearning.
“There’s a 60-some page remote-learning packet that went out to all superintendents and principals about two weeks ago,” Garrison said, explaining that those packets were prepared by teachers, principals and administrators in conjunction with the Illinois State Board of Education.
“So, yes, there is some guidance, but the guidance points to local control and honoring that local control,” she said.
Garrison, who was appointed by Pritzker to the state’s Educational Success Committee last November, was not involved in the preparation of those packets, but, “I have been involved more on the emergency operations side, with my background.
“My background was being in the Illinois Army National Guard force battalion, which was my job,” she said.
That experience comes into play with her involvement in Fayette County’s Emergency Operation Center headed up by Kendra Craig, the county’s Emergency Management Agency coordinator.
“It’s just making sure that there’s consistent communication and that our medical professionals are the ones leading it,” Garrison said. “And then the rest of us follow up, supporting the message.”
The Vandalia Board of Education is scheduled to hold its regular monthly meeting next Tuesday evening, and a decision will have to be made whether to postpone that meeting or hold some type of virtual meeting, with all participants being at home.
“I’m working on that today,” Garrison said Monday.
She said the district currently has two substantial building projects out for bid, and she has been working on getting that information out to board members and the local media.
The key is putting together something with sufficient security measures, as there has been what’s called Zoom bombing, with computer hackers disrupting meetings and feeding inappropriate material.
“So, we’re very cautious about the security settings for our remote meeting,” Garrison said. 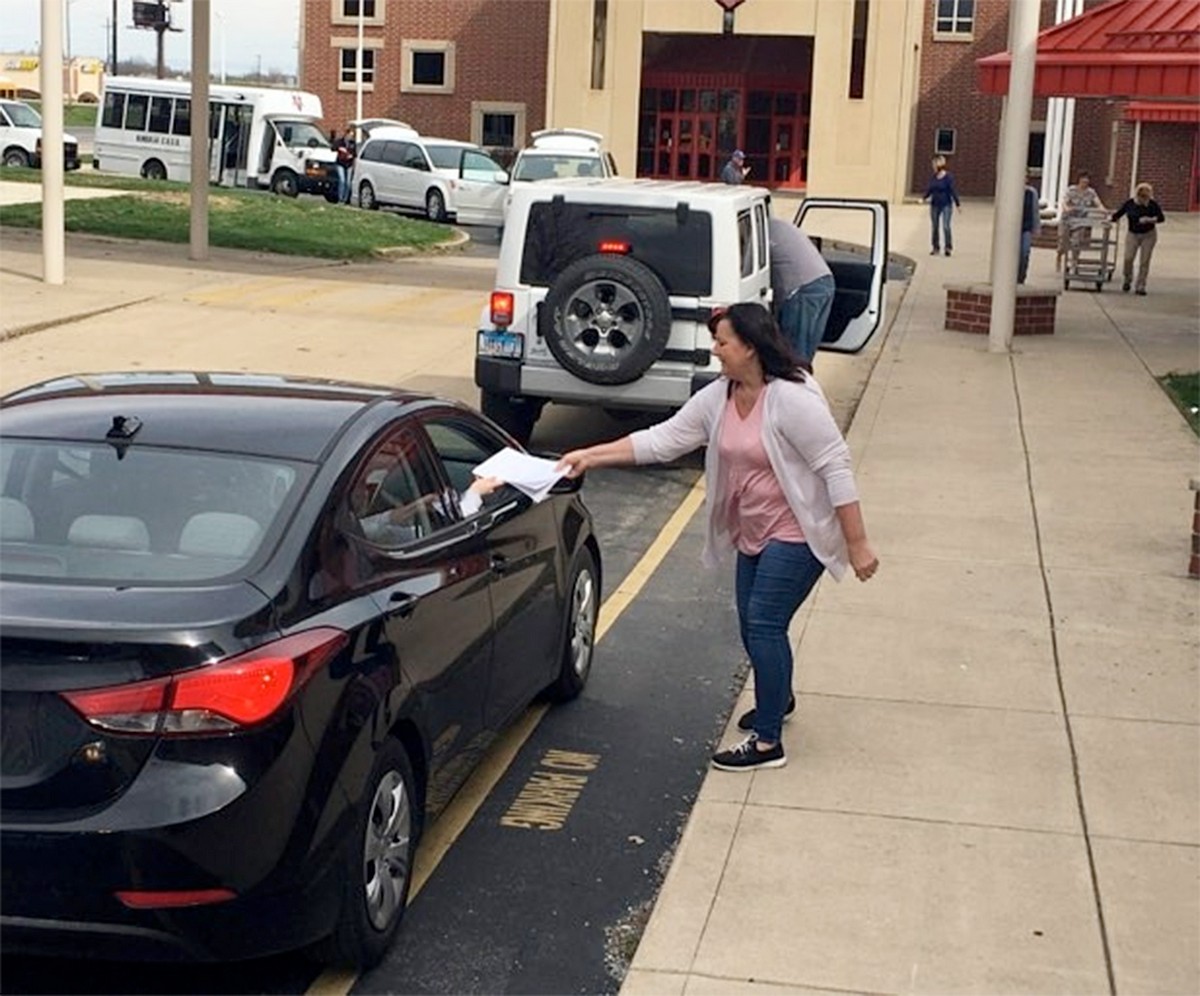 Laurna Knebel, a fourth-grade teacher at Vandalia Junior High School, hands a packet of school work to a student.