Fayette County board members are expected to decide next Tuesday whether some types of cannabis-related businesses will be allowed in the county.

And, based on discussion at Tuesday’s finance committee meeting, there are members on both sides of that fence.
That discussion came after a large part of the meeting was dedicated to a presentation by one of two men who are looking at creating a 63,000 square feet facility with 23,000 square feet of greenhouse space south of Vandalia off of Carlyle Road.
A proposed ordinance given to board members prior to this week’s meeting includes six possible types of businesses related to adult-use cannabis:
• Craft grower.
• Cultivations center.
• Dispensing organization.
• Infuser organization or infuser.
• Processing organization or processor.
• Transporting organization or transporter.
If the board decides to allow any or all of those businesses, which would only be able to operate after receiving state licensing, it would have to determine how types of each business would be allowed in Fayette County.
Board members, all of whom were at Tuesday’s finance committee meeting, were also presented with a proposed ordinance that would set a sales tax of 3.75 percent for all marijuana, with the exception of medical marijuana, sold in unincorporated areas and 3 percent sold in a municipality in the county.
Prior to the discussion on the ordinances, Glenn McElfresh presented to board members a plan to build an indoor cannabis growing operation south of Vandalia.
McElfresh, a Chicago native who is the chief compliance officer at a licensed medical cannabis cultivator, processor and retailer in Massachusetts, is partnering with Taylor Jones, a Kentucky native who is the vice president of sales at a cannabis company.
He said that their business, TAG IL, will be seeking licenses from the Illinois Department of Agriculture to operate as a craft grower, infuser and transporter.
In addition to growing cannabis, their business would manufacture cannabis edibles, vaporizer pens and other edibles.
The 23,000 square feet of greenhouses would be “essentially like any other greenhouse operation,” McElfresh said, with security measures being much tighter.
They have estimated that the operation would employ 51 jobs in the first year, 83 in the second year and 128 in the third, with the salaries ranging from $40,000 for cultivation technicians to $100,000 for the general manager.
Employees would receive benefits such as full health, vision and dental, McElfresh said.
They estimate revenues as $2.509 million in the first year, $8,307 million in year two and $11.372 in the third year.
While the county would not see any revenue from the operation, it would be receiving additional property tax revenue, according to Bruce DeLashmit of Bellwether, the county’s administrator assistant.
Also, McElfresh said, TAG IL would have an agreement through which the county would receive 1-3 percent of that generated in sales.
He also told board members that the company plans to benefit local causes, such as Cop with a Shop and any addiction treatment programs.
Discussion began after a motion was made to have the cannabis-related ordinances on the agenda for next Tuesday’s regular board meeting.
Board Chairman Jeff Beckman was the first to speak. He was also the most outspoken member voicing an opinion.
“I have real convictions against introductory drugs, which is how I perceive this,” Beckman said.
“Personally, my soul’s not worth any of this money here, and I really urge everybody, you’re going to have until Tuesday to discuss it among family members, anybody on the outside,” he said.
“Just because Illinois says it’s good doesn’t mean it’s good,” Beckman said, adding that he sees cannabis use as causing homelessness, methamphetamine usage and people driving and/or working under the influence of marijuana.
“And, I want everybody to realize there will be a roll call vote. Your name will go on the record and I want you to be aware of that,” he said.
“Yes, it’s a lot of money, but to what extent do you want to collect that revenue,” Beckman said.
Board member Jake Harris said he believes that marijuana will be legal federally within five years, and, “I think it would be nice for Fayette County to be ahead of the curve on something in industry for once.”
Harris said he doesn’t see marijuana as being any different than alcohol and that the county would not turn away a brewery or winery. “We have a distillery in town that could do the amount of damage of maybe this could be,” he said.
“I don’t think we’re in any kind of position to turn away jobs that may provide $40,000 to $120,000 jobs to (our) constituents,” Harris said.
“Whom am I to tell any of you people in this room that you are not going to do something just because of my personal convictions?” he said.
When Beckman said, “That’s why you’re elected,” Harris said, “I understand, but free will is a big part of it.”
Board member Jennifer Waggoner said that looking at it objectively, marijuana is now legal to grow and “it’s no different than me telling Glenn (Gurtner) he can’t grow corn.”
Board member Merrell Collins said that he and Beckman have “agreed 110 percent on (cannabis) sales, and I won’t vote to be able to sell cannabis in Fayette County.
“That being said,” Collins said, “if we don’t have any applications in Fayette County to sell your product, there won’t be any sales.
“It’s going to be grown somewhere,” he said.
“I’m really torn on this,” Collins said, adding that he has some doubts about the plan presented by McElfresh based on personal research.
But, he said, “That’s an awful big industry to thumb our nose at, whether we like it or not.”
“We can sit and argue this all night,” Beckman said. “I’m just asking everybody to do a little soul-searching.”
While it may not be sold in Fayette County, he said, “it’s going to be sold somewhere and some families are going to have to deal with it.” 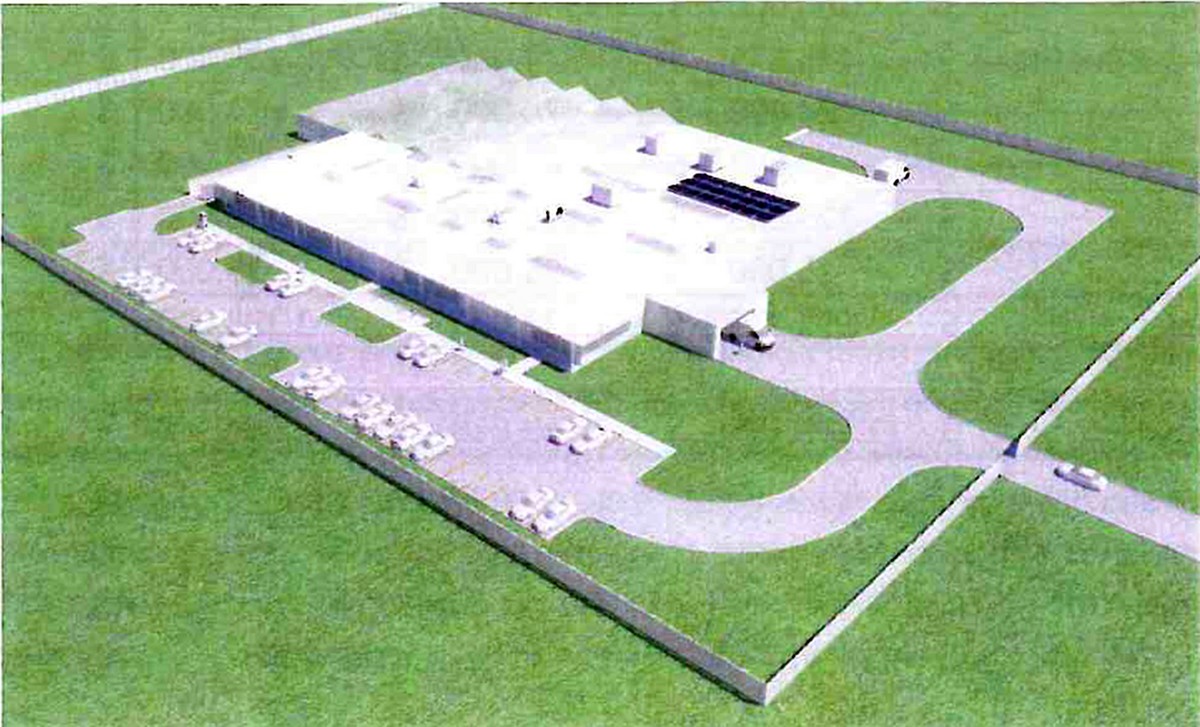 The drawing of a proposed cannabis growing, processing and transporting facility was unveiled Tuesday. 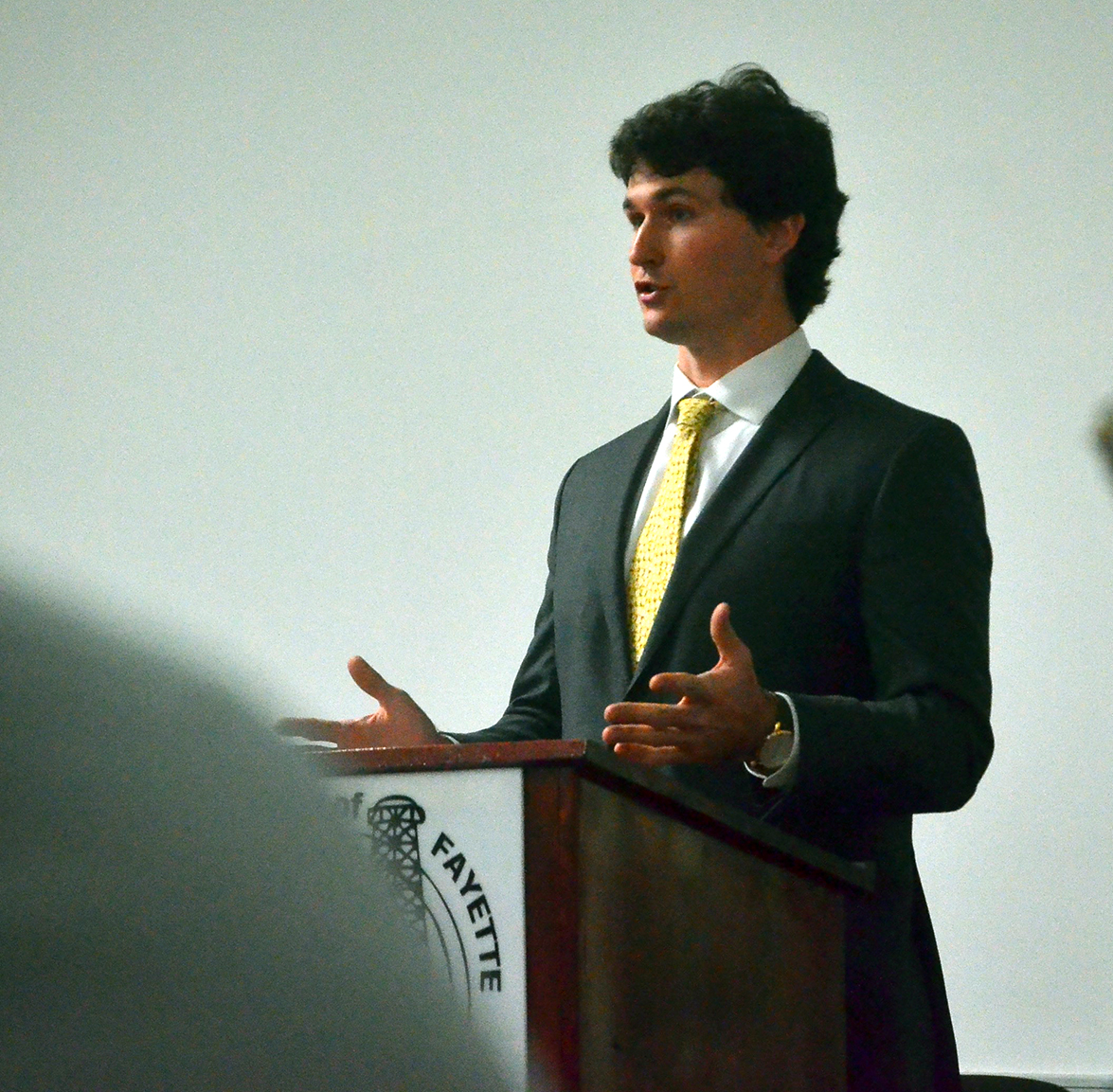 Glenn McElfresh tells Fayette County Board members of proposed for a cannabis facility south of Vandalia.