Anthony Enlow earned the third-place medal at 285 pounds, Jarek Wehrle placed fourth at 106 and Gavin Mouser placed sixth at 195.
Enlow and Wehrle won medals for the third time, with Enlow placing third in 2018 and fourth last year, and Wehrle placing sixth in the previous two seasons.
Both Enlow and Wehrle earned medals after being knocked into wrestlebacks by the No. 1-ranked wrestlers in their respective weight class.
“There were a lot of positives, but obviously, we came up a little short of our goals, so it’s disappointing,” Clay said.
He was able to see those positives.
“I think it’s a big thing for Cutter (Prater), in just his second year wrestling, and Ryan (Kaiser) improved a ton; he broke through this year, so next year he’s going to be looking to climb up on that podium,” he said.
“Owen (Miller), he’s come on. He’s been having good practice partners and a good work ethic. He works hard.
“He’s got Cutter and Jarek (Wehrle) to wrestle with and other guys, like Seth (Karraker), have pushed Owen to get better.
“That all plays into it,” Clay said. “They now just need to take that experience into next year.”
Joining Prater, Kaiser, Miller and Wehrle in the group of next year’s returnees is Tiler Worker, and Clay said, “Three of the four guys in his sectional (bracket) placed at the state tournament, so he’s right there, knocking on the door.
“The kid who took fourth he beat twice this year.”
This year’s group was one of the largest in program history, and Clay said that helps both individually and as a team.
“The more kids you’ve got out, the more kids you’ve got working, and the better your (practice) room is, the more competitive your room is, the more it feeds into winning,” Clay said.
“Teams who do well seem to have a lot of kids at state, because it’s an environment type of thing, and you create that environment,” he said.
“The harder you work at it, the better you get, (and) wrestling is more so that way than any other sport I’ve been a part of.”
Enlow ends his career with a third-place finish, his only loss at state coming to Hayden Copass of Westville, the No. 1-ranked wrestler who went on to claim the title at 285 pounds.
“Going into the match, I knew it was going to be tough,” Enlow said. “I knew that I had a chance, but that it was going to be a really good match.
“I give credit to him – he was very good and was able to get good pressure and good position,” Enlow said.
“I just came up short.”
After that loss, Enlow came back to claim third place.
“I knew after that loss that the only thing I could do was come back stronger.
"I knew I had to come back and finish my season strong.”
About his career, he said, “I’ve always had high expectations for myself all four years. I always expected to win.
“I came up short throughout the years, but, overall, I’m very proud of myself. I though I did very well,” Enlow said.
Like Enlow, Wehrle earned a third medal at state.
“It’s not where I wanted to be,” he said, “but it’s still an accomplishment, my third placing and fourth is the highest that I’ve placed.
“I think in the last match, I could have won, but it’s one of those things.
I had already beat him four times,” Wehrle said.
“I’ve learned a lot,” he said. “I just have to keep getting better. They say you learn more from a loss than a win.
“I beat the guy who’s going for first tonight two weekends in a row, so we’re all really close.
“I’m right there; maybe get a little better and I’m at the top,” Wehrle said.
Mouser earned a medal for the second straight year. “It feels good to be on the podium, but it’s just the fact I couldn’t reach my goal.
“But it always feels good to place at state,” he said.
“I wanted to be the best,” Mouser said.
“I’m a little hard on myself now and then, and, yeah, sometimes the kid is better than me, but I still think, what can I do next time.”
• 106 pounds-Jarek Wehrle – Won by fall over Brady Collins of Lisle, 1:54; defeated Garrett Luke of Lena-Winslow, 2-1; lost to Saul Trejo Jr. of IC Catholic (ranked No. 1 in the state), 4-2, went to wrestlebacks; defeated Collin Altensey of Riverdale, 1-0; lost to Luke of Lena-Winslow, 4-2, in overtime. Fourth place.
• 113 pounds-Owen Miller – Lost to Maddux Blakely of Dakota by fall, 2:57, went to wrestlebacks; won by fall over Devion Sanderson of Lisle, 0:54; lost to Michael DiBenedetto Jr. of IC Catholic, 6-4.
• 120 pounds-Cutter Prater – Lost to Paul Keane of Peotone by fall, 0:36, went to wrestlebacks; lost to Ethan Matlock of LeRoy, 4-3.
• 138 pounds-Ryan Kaiser – Lost to Dylan Grigsby of Canton by fall, 1:53, went to wrestlebacks; lost to Winston McPeek of Lena-Winslow by fall, 1:58.
• 152 pounds-Bradyn Kaiser – Defeated Curtis Green of Westmont, 6-5; lost to Jack Patting of Alleman, 6-1, went to wrestlebacks; lost to Noah Schnerre of Orion, 2-1.
• 195 pounds-Gavin Mouser – Won by fall over Samuel Edwards of Dwight, 1:47; lost to Sebastian Quintana of Dixon, 8-1, went to wrestlebacks; won by fall over Kody Marschner of Reed Custer, 1:30; defeated Reese Edwards of Springfield Sacred Heart Griffin, 9-3; lost to Cade Scott of Unity by fall, 2:44; lost to Nathan Rosas of Harvard, 8-3. Sixth place.
• 285 pounds-Anthony Enlow – Won by fall over Aaron Wagenback of Tremont, 1:51; won by fall over Nate Portz of Fulton, 2:44; lost to Hayden Copass of Westville (ranked No. 1 in the state), 1-0; defeated Logan Wilson of Tolono Unity, 5-1; won by fall over Charlie Jaqusah of Alleman, 1:26. Third Place. 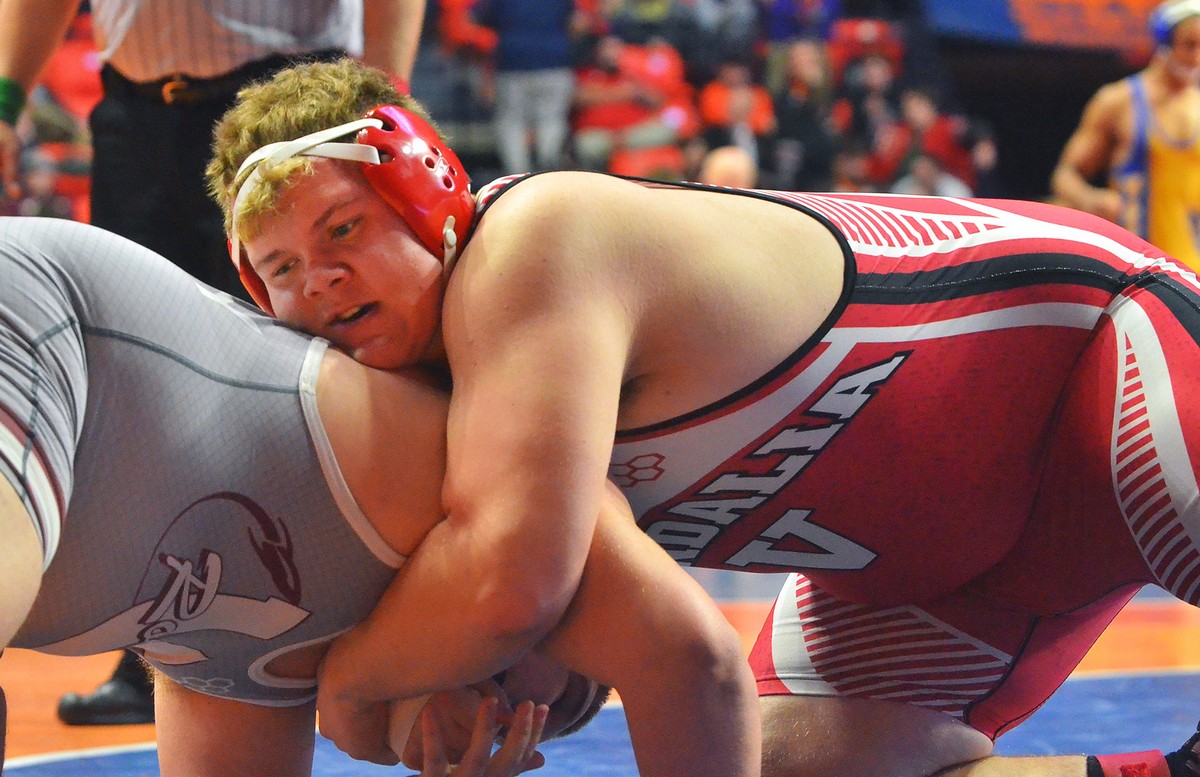 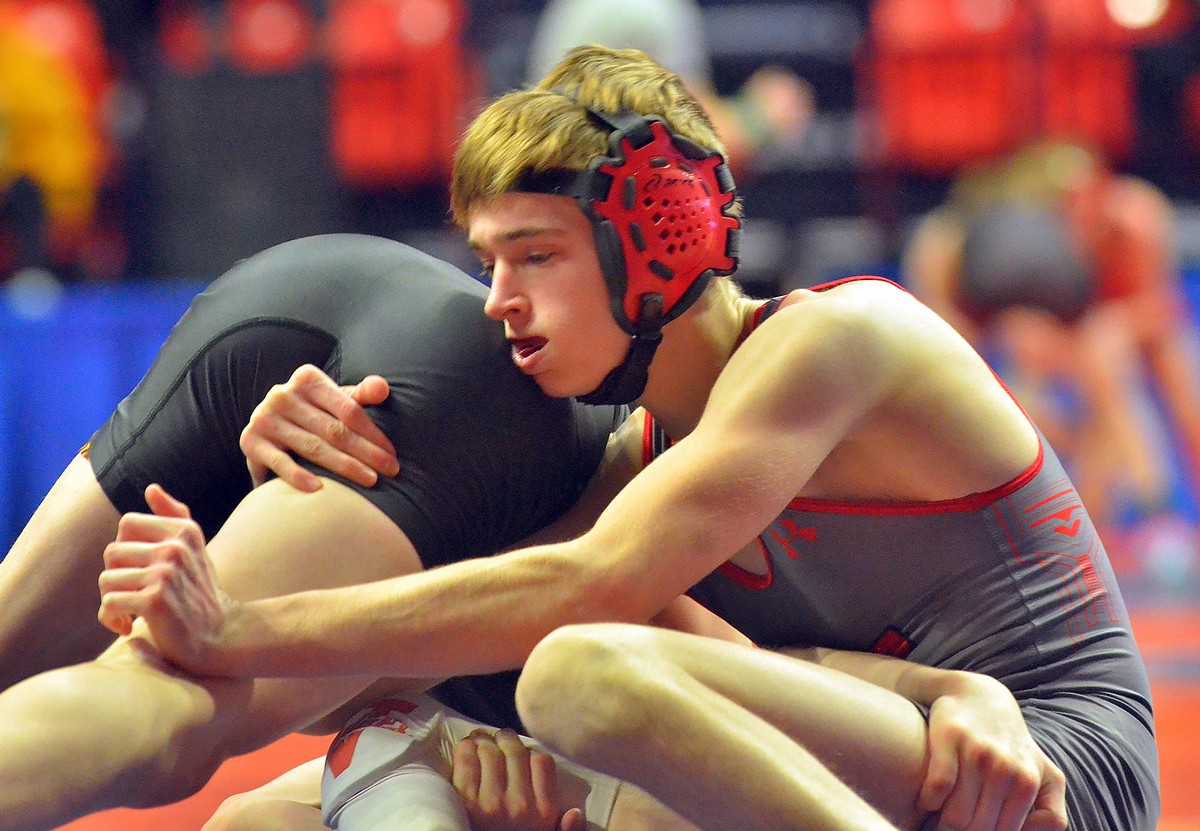 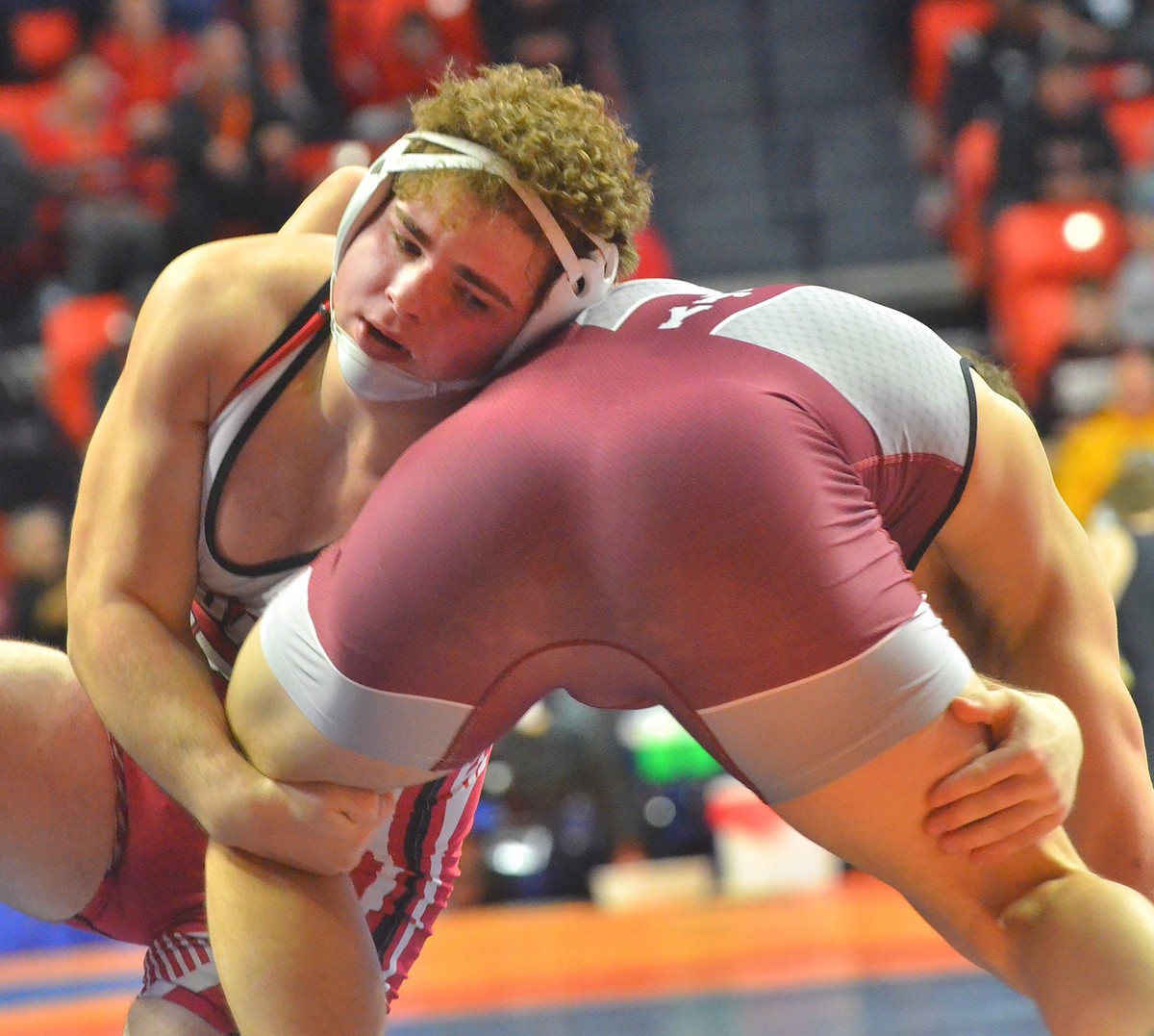 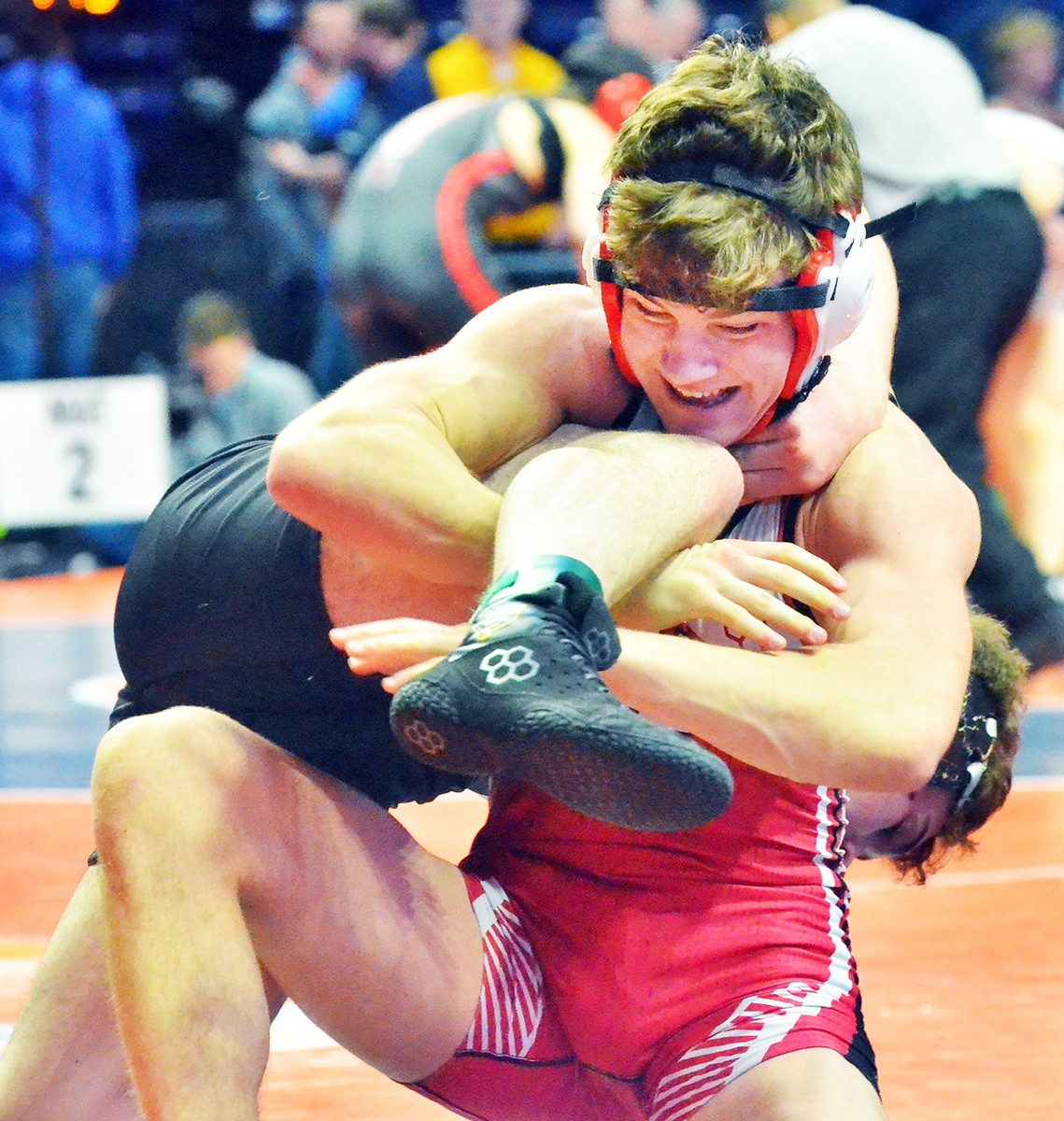 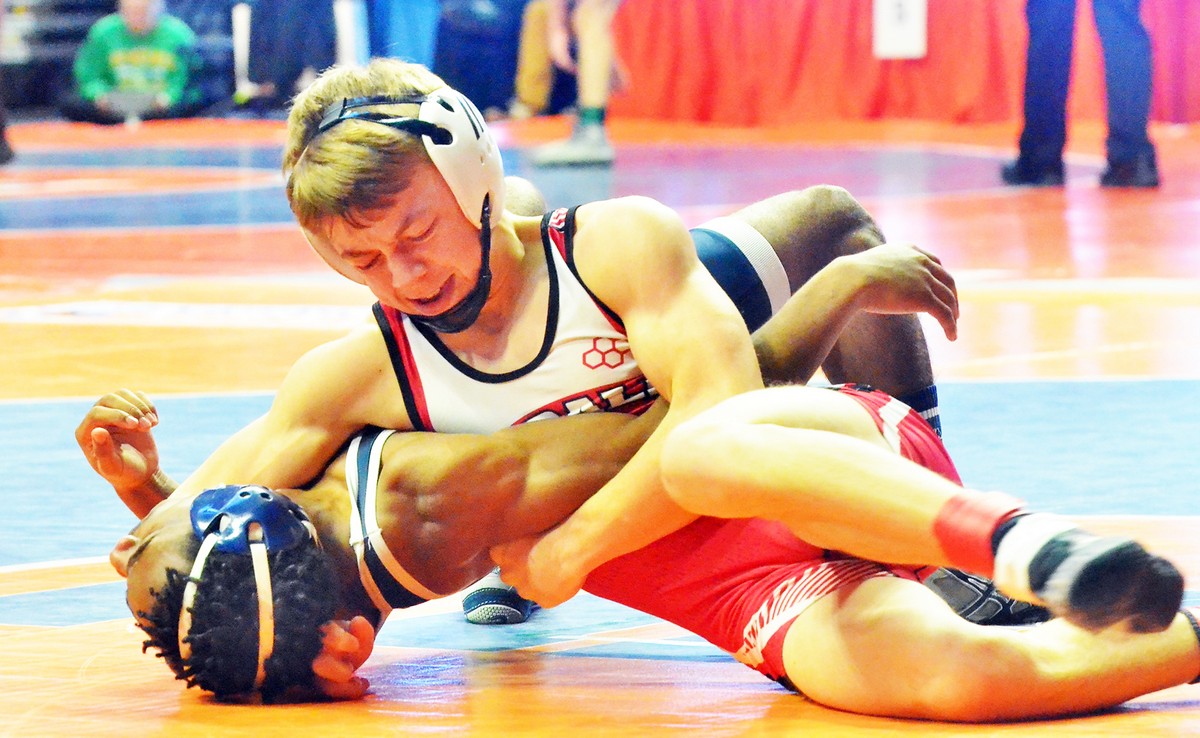 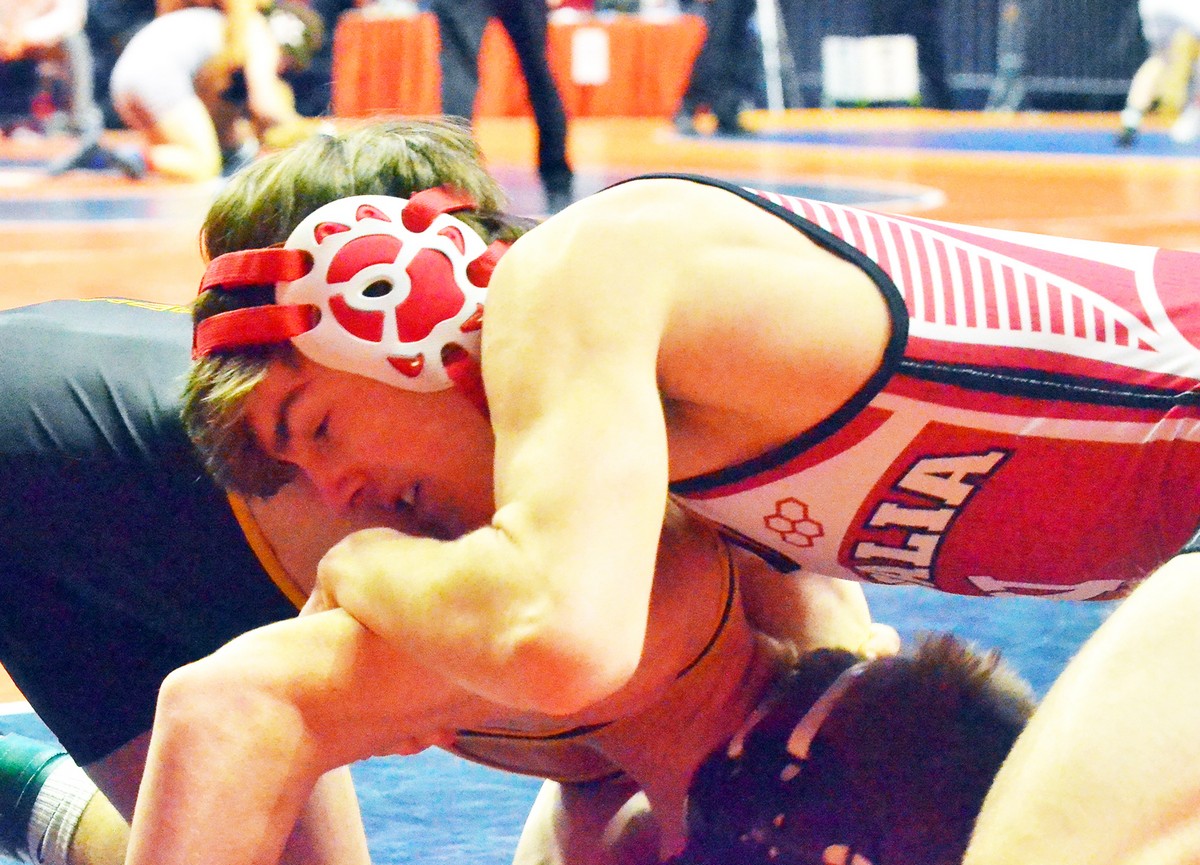