Inspectors also found cracks inside the structure and changes made over the years that have altered the Statehouse’s historical profile. The flagpole atop the capitol needs to be replaced and the holiday lights will probably need to be hung in a different manner, Harl Ray, senior project manager for the secretary of state’s Department of Physical Services, said at a Capitol Architect board meeting.
Secretary of State Jesse White’s office is tasked with overseeing buildings in the Capitol Complex.
Chicago-based, women-owned firm Bailey Edward performed an inspection from the top of the Statehouse dome to the fourth floor, where access to the inner dome is located right outside the House gallery.
That dome, standing about 235 feet tall, is what Illinoisans see from inside the building. The outer dome is the silver-colored, 361-feet tall structure seen from outside the building.
The firm’s final report, expected by mid-January, will include “a detailed and prioritized list of recommended corrections and repairs to guide future preservation efforts of the Illinois State Capitol Dome,” according to its website.
Ray said examiners found open seams in the outer dome’s protective metal skin and other spots where the sheet metal overlaps incorrectly. Those areas are “actually catching rain,” as opposed to allowing the rain to run from one metal shingle to the next, and causing “active leaks.”
Secretary of state crew members are using plastic sheeting to guide water into buckets so it does not seep below the inner dome to occupied areas of the Statehouse.
Inspectors also “discovered a crack on all four compass points” of the bracket structures supporting the stone columns visible outside the capitol.
“They are not worried. There is no structural failure. They’re just wanting to know what happened and why,” Ray said. “Those cracks look like they’ve been there for decades — a long, long time.”
Assessors will reexamine those areas to determine whether additional support is needed, he added. They will be aided by a set of architectural drawings from 1870, which were donated from the Springfield Lincoln Library’s Sangamon Valley Collection last summer.
Inspectors are also examining brick archways in the area between the two domes and what effect the high-sulfur coal originally used to heat and light the Statehouse had on the material used in banding around the structure.
Ray said he expects the study to recommend replacing the “skin on the dome.” That might cost in the “ballpark” of $5 million, according to estimates based on the cost of doing the same work in 1975. At that time, the state paid $950,000.
Similar to the method utilized to renovate the U.S. Capitol, the work would necessitate scaffolding from the flat portion of the Statehouse roof to the flagpole, which also must be changed.
“Our guys and gals are at great risk when they’re up there changing the flag. It might be zero wind down here, but up there it feels like 25 or so,” Mike Wojcik, director of Physical Services in the secretary of state’s office, said.
“We’ve been fortunate that we have volunteers that want to go up, but more and more, we have less and less people that are not afraid to go up there.”
He proposed installing a pole similar to that in Chicago’s Union Station — the flag can be lowered, replaced and raised from the observation room.
This “safer” type of flagpole is being added to the Old State Capitol as well, Tim Partrick, a member of the Capital Development Board, saod
The exposed part of the pole at the Statehouse is 23 feet tall, with another 28 feet of pole that connects to the ceiling of the observation deck. Each time the flag is lowered, workers use the floating staircase which, Wojcik said, was only meant for maintenance needs.
Ray said he also expects to receive a recommendation for “how and why and where we can do Christmas lights in the future.”
Since the Capitol saw its first legislative session in 1877, the state has made numerous renovations. “But the dome has been neglected, giving way to leaks and falling debris,” according to Bailey Edward’s website.
Eric Whitlock, a secretary of state employee, said all tours of the dome have been canceled. 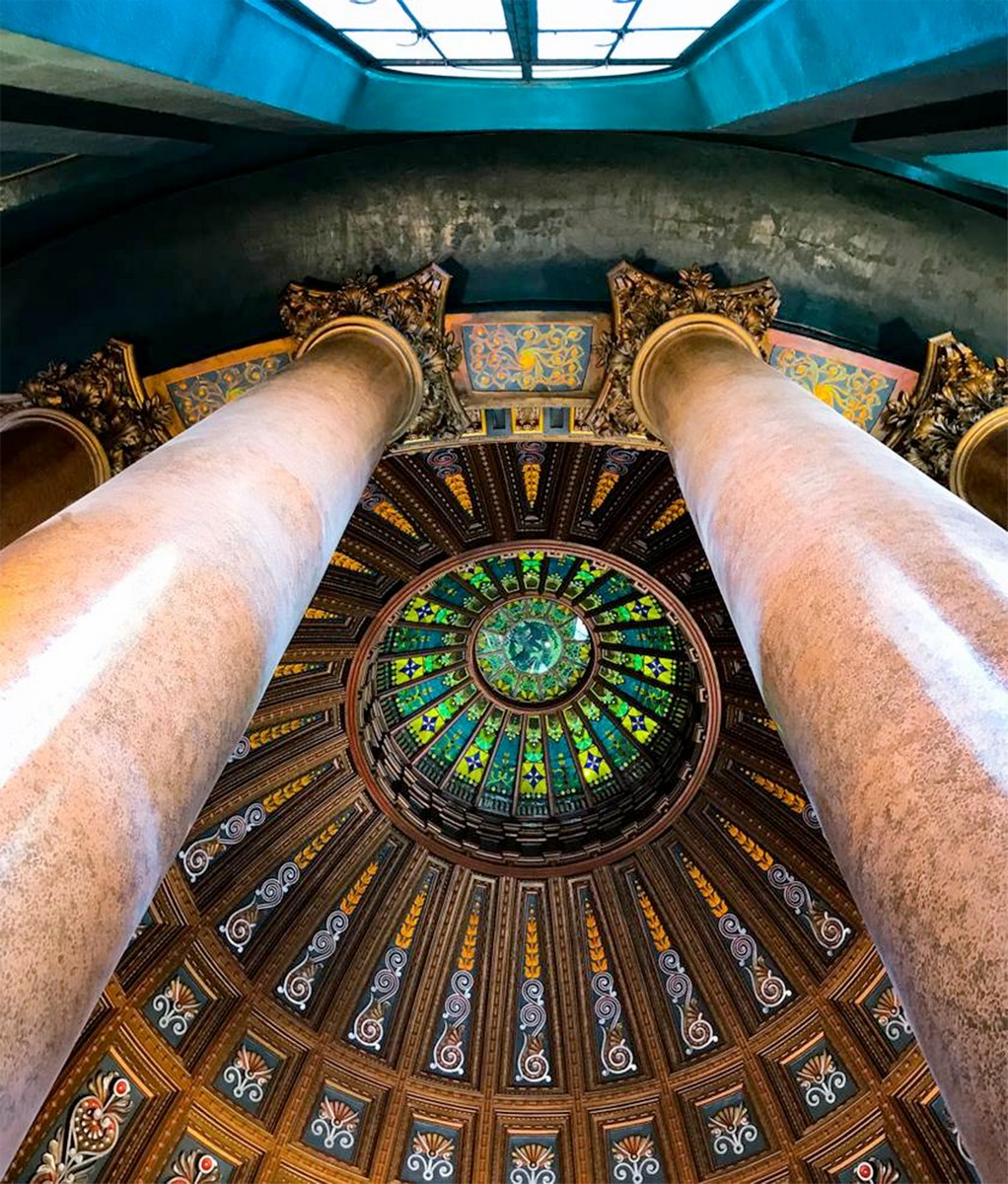