The outcome of Friday’s game was never really in doubt, with the Vandals squaring off against a Litchfield squad that is small in numbers and consisting mainly of lower classmen.

So, in the win that boosted the Vandals to 4-0 on the season, the big numbers weren’t necessarily the 62 points scored in a shutout, but those showing up in the school’s all-time records lists.
In the shutout win, quarterback Matthew Wells jumped from No. 4 to No. 1 on the all-time passing list.
Wells attempted only four passes, completing all four, before stepping aside for others to step into the quarterback position, but the 93 yards passing raised his career total to 2,571 yards.
Also on Friday, running back Trevor Smalls gained 147 yards on just 10 carries and became only the second Vandal to reach 4,000 yards of total offense in his high school career.
The three touchdowns by Smalls gave him 55 for his career at VCHS, a week after his 97-yard return of an interception in the win against Greenville pushed him past Robin Bone (51, 1974-76) into the top spot for TD’s.
Friday’s win marked the first time since the Vandals joined the South Central Conference that they’ve started out 4-0. It’s also only the fifth time in the school’s history it jumped out to that kind of start, the other teams being 1963, 1964, 1976 and 1976.
One of the positives that coach Jason Clay got from the win was the playing time for the younger Vandals.
“It’s Friday night and we got sophomores in, which is a good thing, because they’re not getting into (varsity) games very often,” he said.
The win came against a Litchfield team that almost didn’t even take the field this season. With team numbers in the low 20s, with a majority of those players being freshmen, Litchfield agreed to field a team within a couple of weeks before the first game.
“Obviously, I feel for Litchfield and the situation they’re in, but it’s a good job by their kids and coaches for coming out here and playing, and giving an effort against our varsity,” Clay said.
The outcome of Friday’s game was rather obvious within the first 3½ minutes of Friday’s game.
On the third play of the game, with the ball on the Litchfield 45-yard line, Wells hooked up with Blake Morrison for a scoring play just 90 seconds after kickoff, with Cameron Withers adding the extra-point kick.
When the Vandals forced Litchfield to punt from their 34-yard line, Thomas Ritchey returned the kick to the Litchfield 25. A pass to Morrison got the ball down to the 6-yard line, and Smalls took it in there from there, with Withers’ kick making it 14-0.
Four minutes later, Wells and Caleb Slater connected on a 12-yard scoring play, and about 90 seconds after that, Wells and Garrett Austin combined for a 17-yard touchdown.
Smalls got his second touchdown, from 2 yards out, 28 seconds into the second half, and he scored from 49 yards out after taking the snap in a wildcat formation.
With less than nine minutes left in the half, after Dylan Davis picked off a Litchfield pass and returned it to the Panthers’ 40-yard line, Thomas Ritchey scored the Vandals’ seventh touchdown.
The books show Ritchey gaining 35 yards on four carries, but they don’t show two long runs called back on penalties.
After Ritchey’s touchdown, the majority of the Vandalia’s first-teamers went to the sidelines for the rest of the night.
Early in the fourth quarter, Gavin Davis recorded a pick six and Cody Phillips added a two-point conversion run to put Vandalia up 56-0.
Johnny Lotz scored the final TD of the night on a 10-yard run.
“I thought our kids did a good job of playing hard,” Clay said.
“We had a few penalties, but the one thing I will say, the big challenge this week was perimeter blocking, and if we’re getting called for penalties, at least we’re getting down their and blocking people.
“We will work on the technique part of it, but if they’re not getting down there and blocking, than I’m going to be disappointed in people,” Clay said.
“The desire to get downfield and block people was greater tonight,” he said. “I told them, if we can run the football, it’s going to make it easier to throw the football, and they can get their catches.” 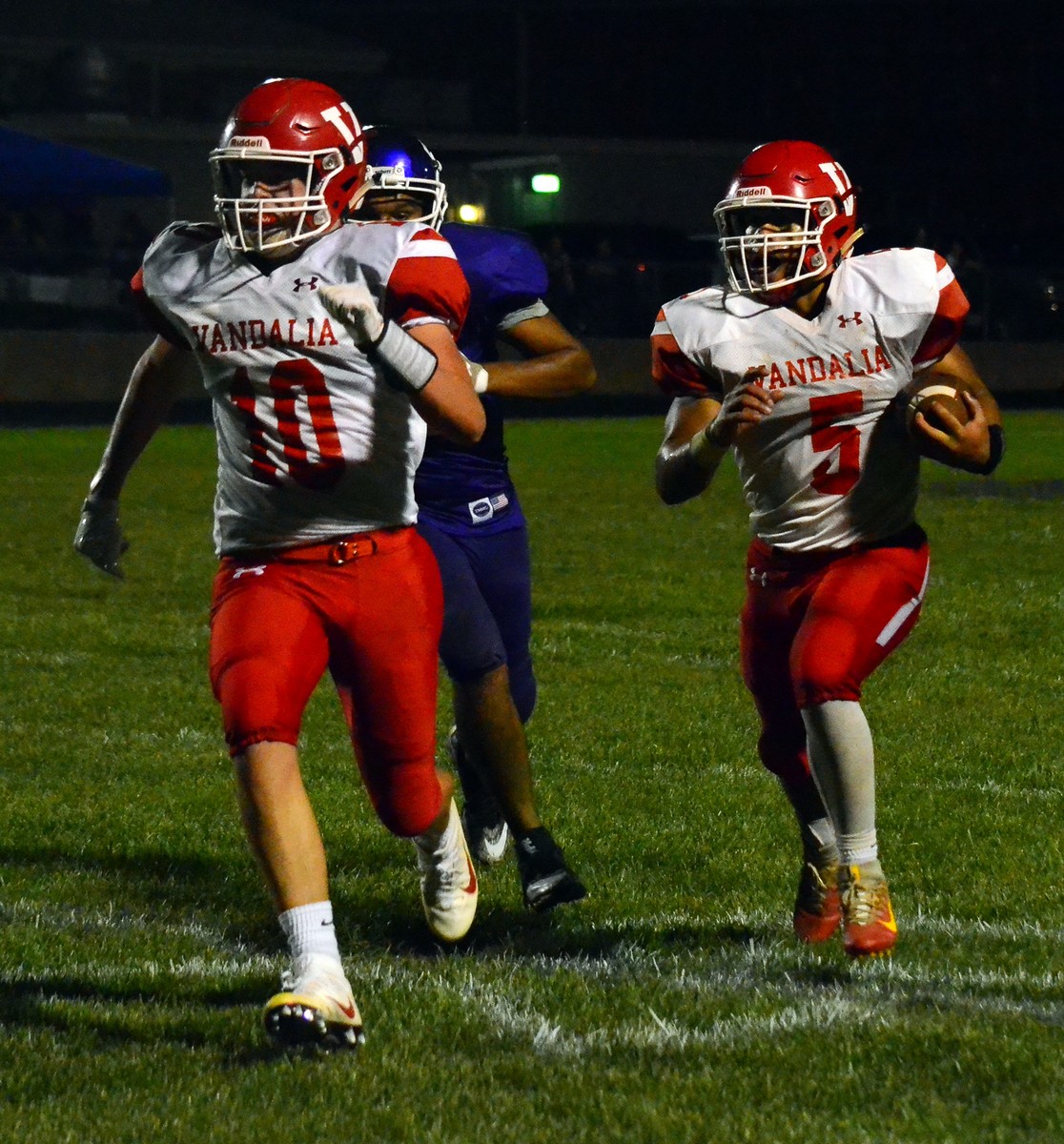 Trevor Smalls gets an escort from Garrett Austin on his way to a second-quarter touchdown at Litchfield on Friday. Smalls became just the second Vandal to surpass 4,000 yards in total offense (4,141), joining Travis Blain (1995-97, 4,404). 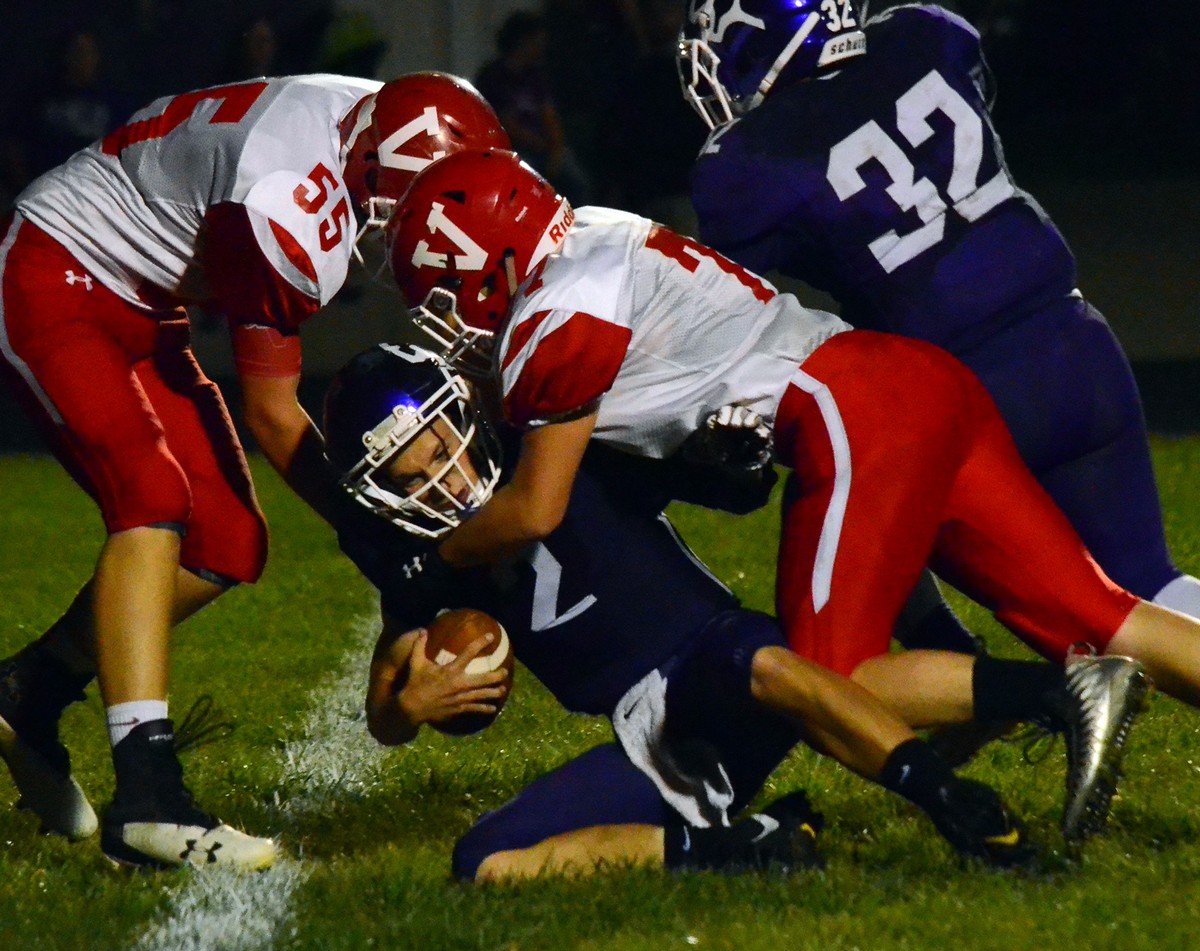