A Vandalia Community High School who has been battling a rare form of cancer since late last year is not alone in his fight.

Shortly after Cody Warner was diagnosed with atypical Ewing sarcoma, one of his friend’s mother initiated efforts to help Cody and his family, and the VCHS staff and student body joined in.
Cody, the 16-year-old son of Scott and Michelle Warner, has been undergoing chemotherapy and radiation treatment since he was diagnosed with cancer. Surgery has not been considered because of the danger to his eye.
Michelle Warner said at the end of October, Cody had some swelling around an eye. “They thought it was allergies,” she said.
But, when it got worse, and there was pressure on the eye, they went back to the doctor, at which time an MRI showed the cancer.
At this point, Michelle said, doctors “anticipate that (the current treatments) will take care of it.
“If it does not, the chemotherapy board will meet” to talk about further steps to take, she said. If the treatments are successful, Michelle said, he will undergo scans every three months.
Throughout his fight, Cody’s mother said, “He’s been very positive.”
Helping him to stay positive is the support that Cody and his family have been receiving from students and staff, as well as people in the community.
“It is very heart-warming to see what everybody has been doing, the kids and the school and the community, in general. It is truly amazing.
“And it helps Cody feel good,” she said.
Efforts to help the family were started quickly after the diagnosis by Bev England, whose son, Carter, is a good friend of Cody’s.
“I just took it upon myself because I know how much the family would be going through, including all of the travel to and from treatments and all of the expenses,” England said.
“I hate to see anyone have to go through fighting cancer, and when it’s a child, it’s feels so much worse,” she said.
England started a GoFundMe page online that has thus far raised about $800 and organized a “Strike Out Cancer” bowling benefit in December that raised about $1,600.
England is also one of the organizers of a benefit at the Vandalia Moose Lodge this Saturday, beginning at 3 p.m. (More information in the calendar on Page 2).
“The support has just been amazing,” she said, specifically noting the contributions and support from students and staff members at
Vandalia Community High School, and at other Vandalia schools.
“The kids have really gotten involved,” she said. “They sold Team Cody T-shirts and bracelets, they made a banner that students signed, and his teachers have made donations themselves.
“Cody also has a crew of kids are doing stuff for him,” England said.
“The response has just been phenomenal.
“The art teacher (Jim Dierkes) and his students created a banner with a car on it and had the kids sign it,” she said. “Cody just loved that.”
To see if his schoolmates would get involved, England contacted Michelle McNary, the physical education teacher and girls basketball coach at VCHS who is also the sponsor of Code Red, the school’s student council.
“Bev contacted me about doing something, and I told her that I could see what we could get going,” McNary said.
The support began right after the diagnosis, when donations were taken at a volleyball game at the end of the season.
Also, McNary said, “Coach (Brian) Buscher (boys basketball coach) had talked the last couple of years about doing a cancer awareness game, and we decided that this was a good reason to go ahead and do something like that.”
Each of teams had a Team Cody night at a home basketball game, during which gift baskets were auctioned off. Those helping England prepare those baskets included VCHS Assistant Principal Greta Cocagne, Vandalia Junior High School teacher Michelle Kelly and VJHS secretary Sandy Branham.
One of those gift baskets included a variety of items from the St. Louis Cardinals, which VCHS substitute teacher had obtained.
Both the boys and girls teams, and coaches wore Team Cody T-shirts as their warmup shirts.
McNary, who formerly taught in the Pana School District, contacted the high school there about being their girls team being involved in Team Cody night, and they bought T-shirts for the girls players and coaches.
Also, she said, the high school held a bake sale to raise funds for Cody and his family.
They sold about 200 Team Cody shirts and about the same number of bracelets. The bracelets were sold for a minimal amount, and McNary said that when there were about 50 left, “We had a guy who threw in money and said, ‘Here’s for the rest of them.’”
Thus far, she said, the Team Cody’s work has raised about $2,500.
In addition to getting involved in the fundraising, students at VCHS have shown their support for Cody by creating posters and a banner that students signed.
“It’s nice to see the kids get involved and, as a community, be willing to help someone else like this.”
Students at Vandalia’s junior high and elementary school have also contributed donations to the Warner family.
“Cody’s a great kid,” McNary said. “He’s one of those kids who never causes any problems.
“Most kids don’t even know who he is, because he such a good, quiet kid who just goes about his business,” she said.
Krueger had similar things to say about Cody.
“He’s quiet, he has such a good personality and he’s extremely intelligent,” Krueger said.
“He has a real good core group of friends, and they have just been instrumental when he comes back to school,” she said. “They walk with him everywhere.
“It’s amazing how the kids have even sought him out. If they didn’t know who he was, they searched for him. You could hear them, ‘Cody, how are you doing?” Krueger said.
“Our student body has just phenomenal,” she said.
“This has brought our kids together – it has brought all of us together,” Krueger said. 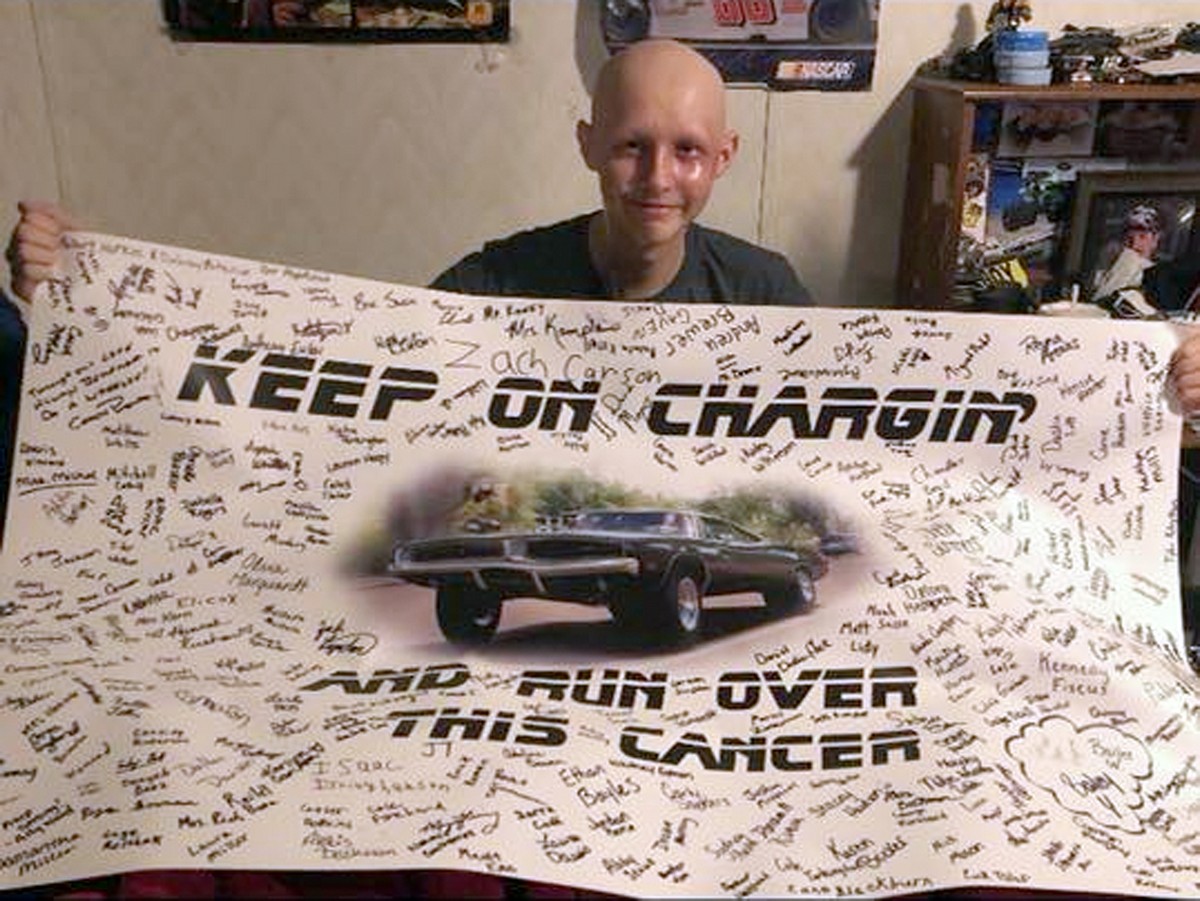 Cody Warner, a Vandalia Community High School junior who is battling a rare form of cancr, is shown with a banner that was made for him under the direction of art teacher Jim Dierkes and his students.