Within the first 2½ minutes of the Vandalia-Pana matchup at Pana on Friday, fans on both sides of the field realized that they were in for quite a game.

The two South Central Conference teams continued trading scores from that point, with Pana going ahead for good early in the fourth quarter and adding a later score to record a 63-55 win over Vandalia.
Pana struck first, at the 9:44 mark in the first quarter, on a 2-yard run by Mason Mizeur. But then, Vandalia responded on its first play from scrimmage, with 9:27 left in the quarter, when Marcus Zimmerman reached up with one hand to pull in a pass from Matthew Wells on a 61-yard scoring play.
Pana responded with a 30-yard touchdown pass play 90 seconds later, then Vandalia responded with a 9-yard run by Wells with 7:06 still remaining in the opening period.
Pana scored on a 10-yard pass play, and the Vandals responded early in the second quarter with a 15-yard scoring pass from Wells to Blake Morrison.
On the ensuing kickoff, Jared Beyers hauled in the kick at the Pana 15-yard line and didn’t stop till he reached the end zone. After the score, Pana recovered its onside kick and scored its second touchdown within just 16 seconds on a 49-yard pass play to go up 35-21.
But, again, Vandalia responded, with Trevor Smalls scoring from 4 yards out and Wells scoring on a keeper with just 45 seconds left in the half to knot the score at 35.
Vandalia was up by 13 points at the end of three quarters, on touchdown runs by Smalls of 46, 1 and 47 yards.
But, Pana, down by 13, changed the momentum of the game by scoring on a 54-yard return of an interception by Cody Klein, and then sealed the win with two scores in the final quarter.
The loss gave the Vandals a regular season record of 6-3, two games behind Carlinville and Greenville, who shared the conference title after the Comets upset Carlinville on Friday night.
“It was a really good football game,” Vandals coach Jason Clay said. “You get two good football teams … I mean, that’s a playoff game.
“We had them on the ropes and they came back – credit them,” he said.
“We made some mistakes, but so did they. When you’re playing that hard, stuff happens. Give them credit for coming back,” Clay said.
“Obviously, defensively we can’t give up that many points and win a football game. We’ve got to get some more stops,” he said. “We didn’t tackle very well.”
Early on, Pana concentrated on stopping Smalls; in the second half, the Vandals found it difficult to get the ball to Zimmerman.
“I thought he ran so hard tonight,” Clay said about Smalls.
“We struggled to get the ball to Marcus in the second half. They were loading up on him. I tried moving him around a couple of times, but he drew a crowd every time,” he said.
In that situation, Clay said, “We have just got to get some more people to step up and make some plays.
“Obviously, losing stinks,” he said. “There are no moral victories – there’s winning and losing, those are the facts.
“But, as I told the kids, Saturday night, everything resets – we’re 0-0. We’ve got a chance (in the postseaon).
“For those 13 seniors, they’ve got one more game for sure. You’ve got to go earn another one,” Clay said. “If you want to keep playing, then you’ve got to earn it.
“Our kids will come back – they put their heart into this,” he said.
Rushing – 39 carries/403 yards, six touchdowns. Smalls 24/269, four touchdowns; Wells 9/60, two touchdowns; Garett McNary 2/16; Zimmerman 4/58, touchdown.
Passing – Wells 9 of 20, 164 yards, two touchdowns, one interception.
Receiving – Zimmerman 6 for 133 yard, touchdown; Morrison 2 for 28 yards, touchdown; McNary 1/3.
Defense – Zimmerman 8 solos/1 assisted, two tackles for loss, two forced fumbles, fumble recovery, half a sack; Thomas Ritchey 5/2; Cole Phillips 3/2; James Taylor 1/1, sack; Rilley Smock 6/1, 1½ sacks; Chandler Boyd 12/1, tackle for loss, sack; Dylan Garrett 4/1; Robby Durbin 0/1; McNary 8/3, tackle for loss; Zane Ulmer 4/3, tackle for loss; Smalls 5/1, fumble recovery; Hunter Boren 1/0; Bradyn Kaiser 2/0; Dustin Lott 1/0; Matt Ledbetter 2/0. 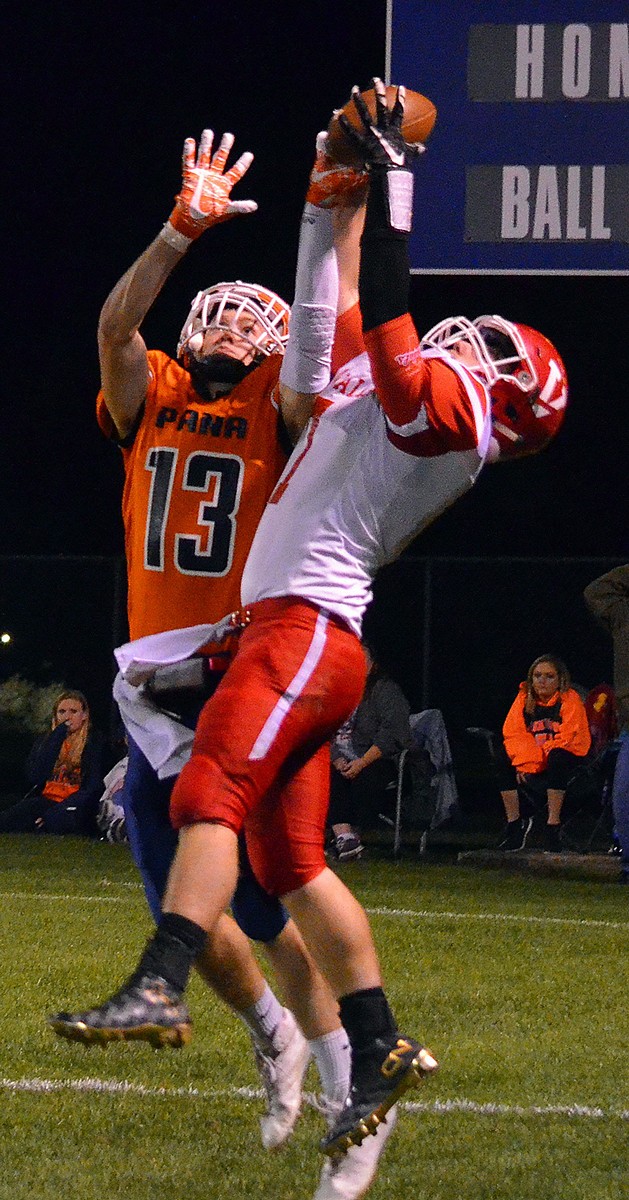 Vandalia’s Marcus Zimmerman outleaps Pana’s Cody Klein to haul in a long pass to set up a scoring play for the Vandals on Friday. 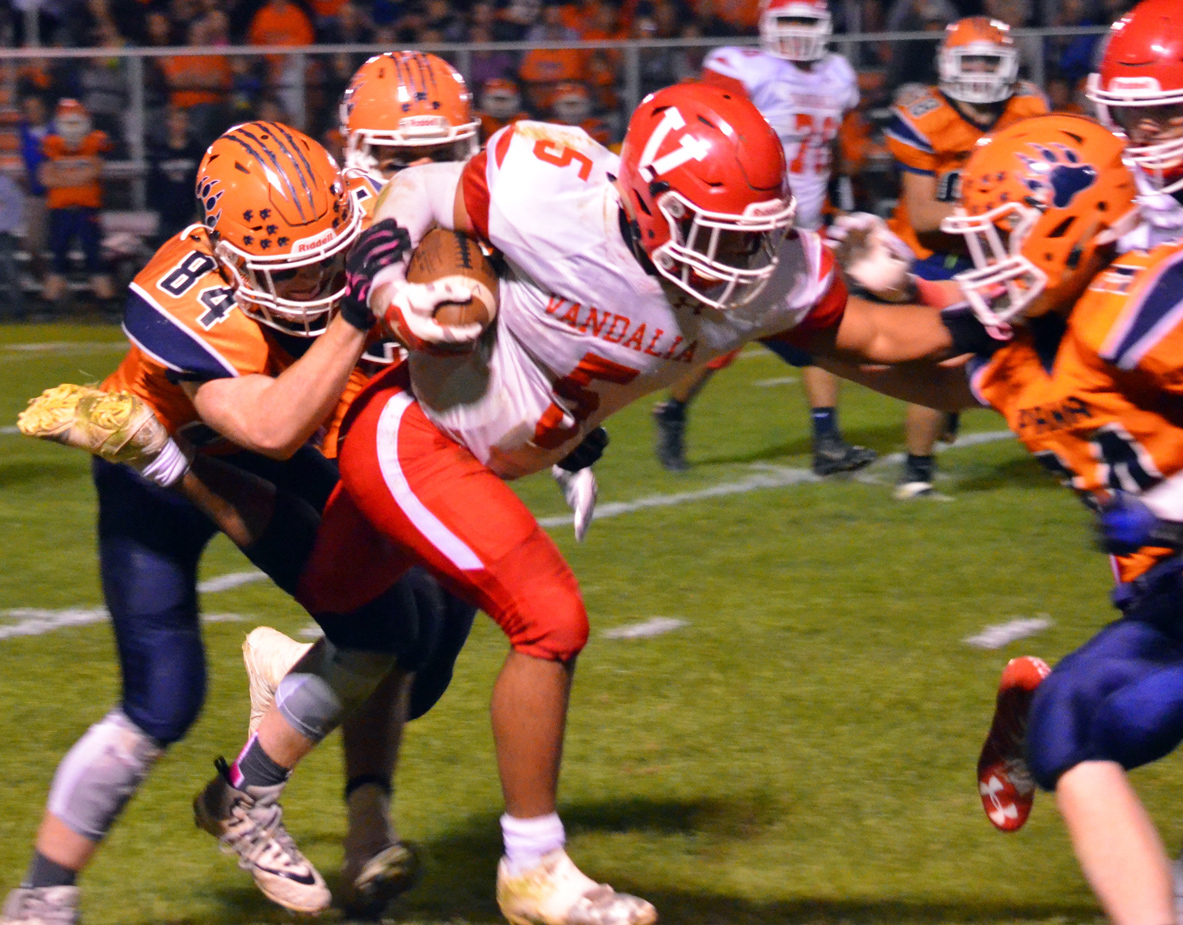 Vandalia’s Trevor Smalls fights off a group of Pana defenders in picking up yardage on Friday night. 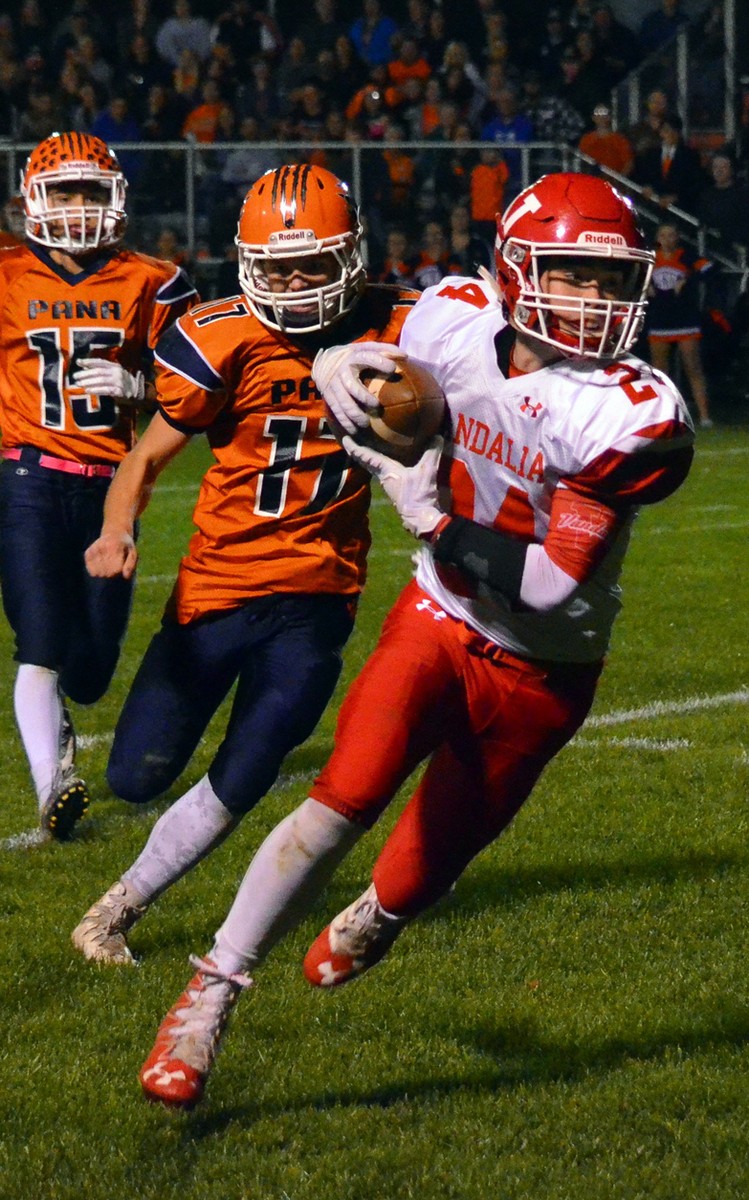 Vandalia’s Blake Morrison heads to the end zone after hauling in a pass from Matthew Wells in the first half of Friday’s game at Pana. 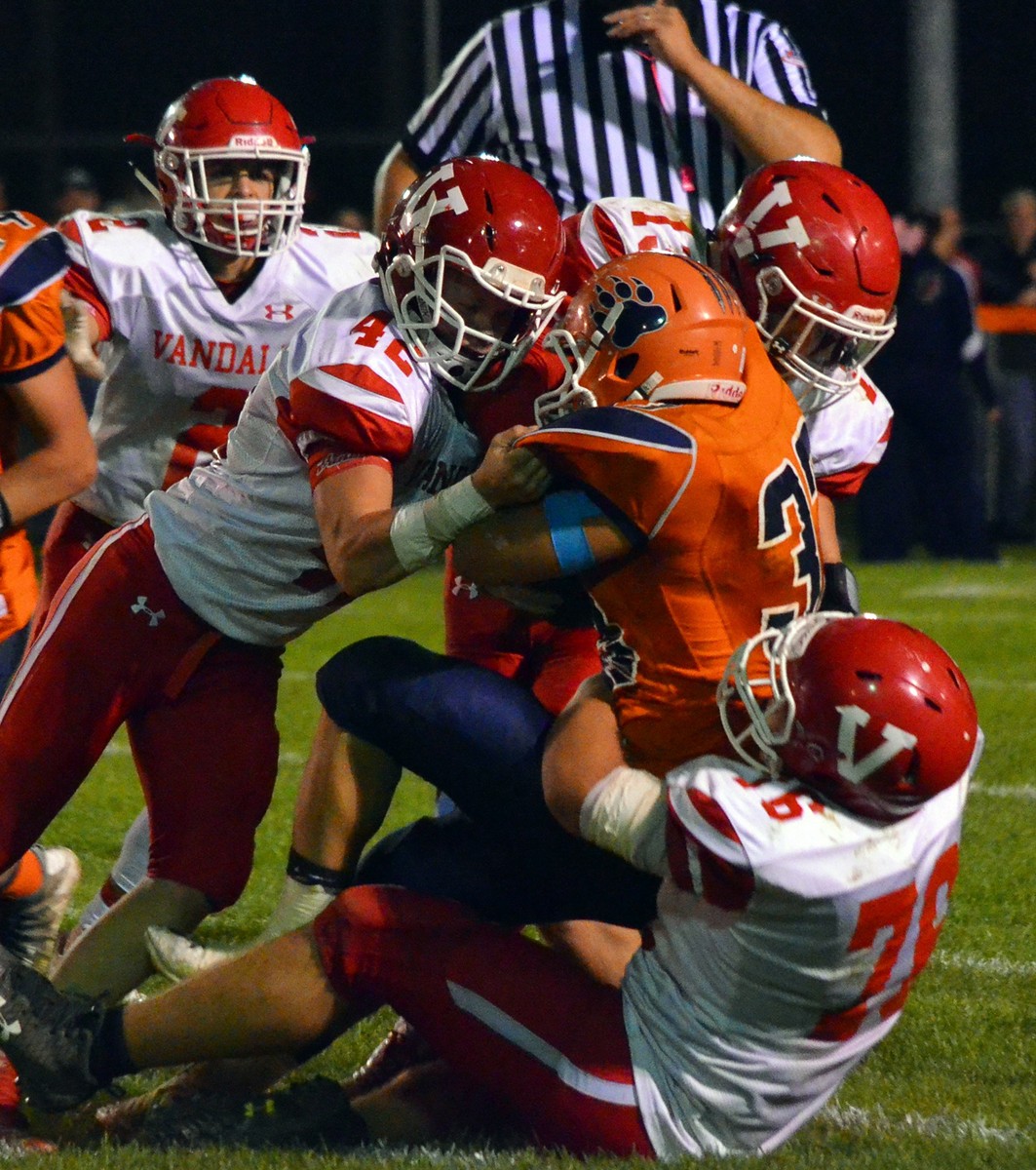 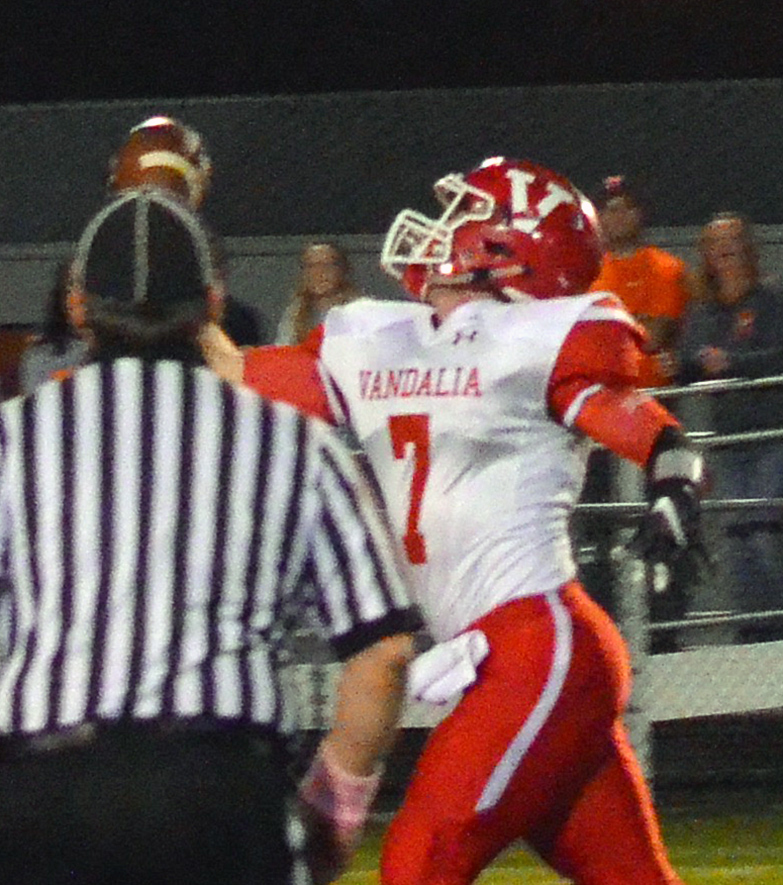 On the Vandals’ first play from scrimmage, Marcus Zimmerman reaches out to snare a pass from Matthew Wells for a 61-yard touchdown.