Vandalia native Josie Barnes has been named to the United States team for the World Championship in Las Vegas, Nev., in November.

Barnes is the daughter of Larry and Lisa Earnest.
The following is the announcement by the Vanderbilt University Athletic Program.
—
Josie Barnes has successfully competed in nearly every tournament at every level in her beloved sport of bowling but there was one big gap in her glistening resume.
She had never bowled in the World Championship and readily admits “this is the thing I’ve always wanted.”
The 29-year old assistant bowling coach at Vanderbilt fulfilled that goal when the United States announced its six-woman 2017 World Championship team that will compete for gold and glory Nov. 24-Dec. 4 in Las Vegas.
The USA team is obviously star-studded with five members returning from the 2015 world championship team.
Barnes is the newcomer for this tournament, although she is no stranger to international competition or this quintet of Hall of Fame bowlers.
Josie, the two-time NCAA Player of the Year and member of Vanderbilt’s national championship team, is a five-time Team USA member after five appearances on the Junior Team USA, and she’s won more than a dozen international medals representing the USA.
“The World Championship is our one opportunity to compete for a world title,” Barnes said.
“It is similar in format to the PABCON (which includes North, Central and South America teams), except this includes the world. It’s the most prestigious event in bowling.”
Barnes’ teammates are a “Who’s Who” in bowling. They are Stefanie Johnson of McKinney, Texas; Kelly Kulick of Union, N.J.; Danielle McEwan of Stony Point, N.Y.; Shannon O’Keefe of O’Fallon, Ill.; and Shannon Pluhowsky of Dayton, Ohio.
O’Keefe, who directed McKendree to the 2017 NCAA championship, is the only other collegiate coach on the roster.
They will compete in six events, including singles, doubles, trios, team, all-events and Masters disciplines on the South Point Bowling Plaza Lanes. 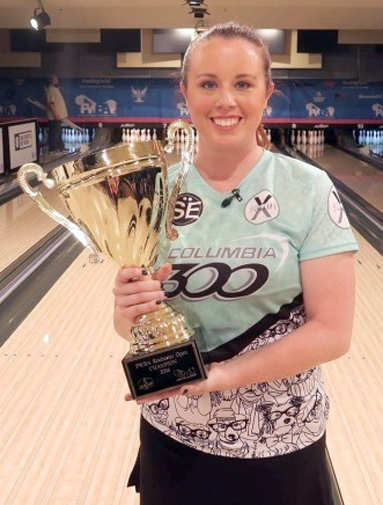