Thirty-three members and three guests registered at the annual meeting and potluck of the Fayette County Home and Community Education of District 6 on June 8 at Holy Cross Lutheran Church in Vandalia.

The youngest guests, and potential future HCE members, present were 3.5-month-old Maegyn, daughter of Rebecca Graves, and 3-week-old Addilynne, daughter of Brittany Nichols.
The tables were decorated in this year’s IAHCE theme, “Down By The Riverside,” representing a riverside picnic, with red and white-checkered table covers adorned with little bouquets of summer flowers.
Allen gave the welcome and Panzi Blackwell asked the blessing for the meal. Following the meal, Allen called the meeting to order and led the Pledge of Allegiance to the American flag.
Following the attendance report, a memorial service was held at the memorial table by Panzi Blackwell and Ashley Davis, who stood at the white cloth-covered round table, which held various items, each symbolizing the absence of this year’s departed members of the Fayette units. Davis pointed out the items as Blackwell explained the symbolic meaning of each, including the round table and the white cloth.
The service was held for those who died in the past year.
Anna Jean Rhodes gave a memorial for Mary Ellen Lovett, who was a charter member of the Wheatland unit. Allen and Elizabeth Kasten spoke of memories of Ilene Sidwell and Sandra Wilhelm, respectively.
Each speaker also placed a flower in a vase on the table in their memory.
Following a prayer by Blackwell, Davis rang the bell on the table in closure of the memorial service.
Joyce Mueller, secretary, read the minutes of the 68th annual meeting. Treasurer Carol Bridges gave the treasurer’s report and presented the 2017-18 budget, which was approved.
Allen requested the board members reports: first vice, Debbie Segrest; second vice, membership-Anna Jean Rhodes; Donna Blair- community outreach and family issues; Anita Smith-international; Ashley Davis-cultural enrichment; and Panzi Blackwell-public relations.
A special guest …
… was District 6 Director Marilyn Schaefer. It was with regret that the members received her retirement announcement, and a red rose was given to her as a token of appreciation of her service, in addition to the Fayette HCE’s wishes for a pleasant retirement.
Schaefer gave all present an encouraging and positive message as she said that this would be the last. Not only has she served HCE well as the district director, she has also been a good listener and an understanding friend.
Several award certificates were presented to units and individuals in recognition of their accomplishments in keeping with the purpose and goals of their United States and National organization.
The Fayette County HCE is a member of the Illinois Association of HCE and a charter member, Lucille Fisher, at 104 years old, has been a member for 58 years.
During the county-wide program, awards were presented to the units according to points earned: first, with the highest score and Unit of the Year was Vandalia Day Unit, second, Bingham-Ramsey; third, Sefton; fourth, St. Peter; fifth, Wright’s Corner; and sixth, St. Elmo.
Schaefer presented the awards and presided over the Installment of the Fayette HCE officers. She presented each one with a bottle of water, a flyswatter bearing a bumblebee sticker and the words “Bee Positive” and a card bearing a hand “to wave at members, new and old, and to potential members”.
Among other notable awards given were: perfect attendance: Anita Smith and Allen, 21 years; and Kate Jennings- 19 years; and membership anniversary certificates: Dorothy Harpster, 60 years, Joan Aderman, Erna Koontz and Panzi Blackwell, 10 years. County HCE members for 50 or more years are: Anna Jean Rhodes, 68 years; Dorothy Harpster, 60 years; Sally Behrends, 58 years; and Elizabeth Kasten and Marilyn Magnus, 53 years. Others, who were unable to attend, are: Martha O’Dell, 69 years, Lucille Fisher, 58 years; Ruth Schnake, 56 years; Evelyn Probst, 55 years; and Carol Austin, 50 years.
Ten new members, presented with copies of “Aim of the Homemaker” and a pink rose, were: Janice Stanford and Jeanne Hohlt-Sefton Unit; Mary Brown, Sherry Wright, and Wanda Pasley-Wright’s Corner; and Rebecca Graves, Katherine Wright, Sherri Garret, Kim Reeder and Carla Etcheson, Vandalia Day. 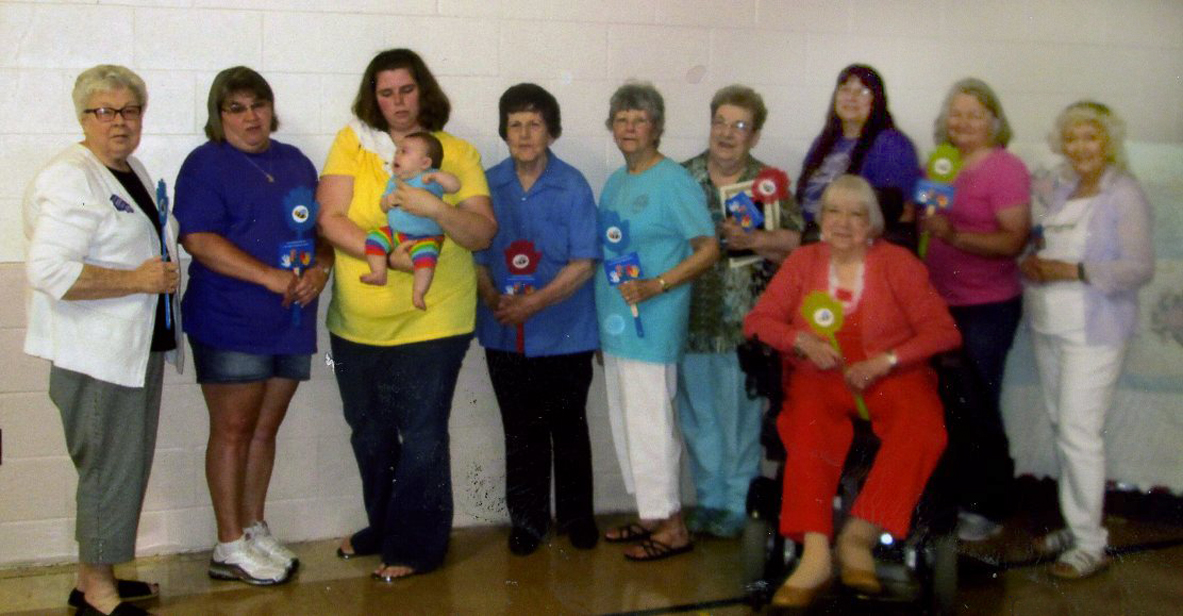