Not long ago in a conversation with Johnnie Hicks, he told me he and his wife were the only inhabitants of the historic village of Anvil.

Actually, he said, Anvil never was a town, but a name provided so that a post office could be established.
When I think of Anvil, country music star “Tex” Williams comes to mind. The music of
Tex was a large part of my childhood because my dad was a musician and had a band.
Along with Hank Williams and Ernest Tubb tunes, “Cactus Ed and the Horned Toads” (my dad was “Cactus Ed”) performed the songs of his former friend, Tex Williams, whom he had performed with in the late l930s and early 1940s.
The son of Tom and Tillie Williams, Sollie “Tex” Williams was born on Aug. 23, 1917, evidently in the old post office at Anvil. He was the youngest of 14 children and contracted infantile paralysis, which left him with a limp.
For those who do not know who Tex Williams is or his place in the history of country music, I will provide a short bio.
Tex came from a musical background, with his dad being an old-time fiddler. He wasn’t the only child in the family with talent and the Williamses had a family band. As early as age 5,
Sollie was playing the banjo, and a year later signed up to play eight picnics at Pleasant Mound School. By age 12, he was playing guitar, banjo and harmonica, and had a one-boy band program on two radio stations, WJBL in Decatur and WDZ in Tuscola.
In the early 1940s, Sollie moved to California. Here he became known as Jack Williams and appeared in his first Tex Ritter film, “Rolling Home To Texas.”
Later, he would become a singer in the Spade Cooley Band, and it was Cooley who nicknamed him “Tex” to identify with the misplaced Texans working in California.
Tex performed for several years with Cooley’s band when Capitol Records offered him a recording contract. Cooley fired him, but this backfired when the entire band quit and went with Tex. He named them the “Texas Caravan.”
The home folks followed his career with much interest and his movies, 53 in all, were shown in local theaters. The late Hughie Craig, a cousin to Tex, collected the movies with other memorabilia and created a successful enterprise in the Tex Williams Museum and a music venue in Ramsey.
Along with Bob Willis and Merle Travis, Tex’Williams is given credit for “helping to develop country music from the rural acoustic origin to a more electrified form with much wider popular appeal.”
On Thursday, July 1, 1948, Tex and his band, now called the “Western Caravan,” came to Ramsey, interrupting a national tour.
Responding to a request from the Ramsey Lions Club to help them raise money for the local fire department, the 10-member band performed two shows in the Ramsey High School gym. About 1,600 people showed up to see the local boy who made good, among them my dad,
Ed Torbeck, Lotus McDowell and Walter Howard, who had played music with him when he was known as Sollie.
Tex had many “firsts” He gave Capitol Records its first million seller in “Smoke,
Smoke, Smoke! (That Cigarette),” which he co-wrote with Merle Travis. He would go on to record nearly 90 songs and was the first president of the Academy of Country & Western Music in California.
Tex Williams was the first to wear the flashy Nudie Suit, a western cut suit decorated with rhinestones, and is credited with helping Nudie Cohn to become known as “tailor to the stars,” including Elvis Presley, Hank Williams, John Lennon, John Wayne and Porter Waggoner.
Quoting from a biography of Tex, “As his songs often praised smoking, he became known as ‘the man who sings tobacco best.”
Tex’ Williams was honored for his contribution to music with a star on the Hollywood “Walk of Fame” and in downtown Newhall’s “Western Walk.”
Locally, he was honored with a street in Ramsey, Tex Williams Boulevard, which leads in the direction of his old stomping grounds of Anvil, Manford, Bingham and Prairie Mound.
Tex Williams died at his home in Newhall, Calif., on Oct. 11, 1985 with his wife, the former Dallas Orr, surviving him to April 21, 2001. They were parents of a daughter, who with her husband visited Ramsey on several occasions. 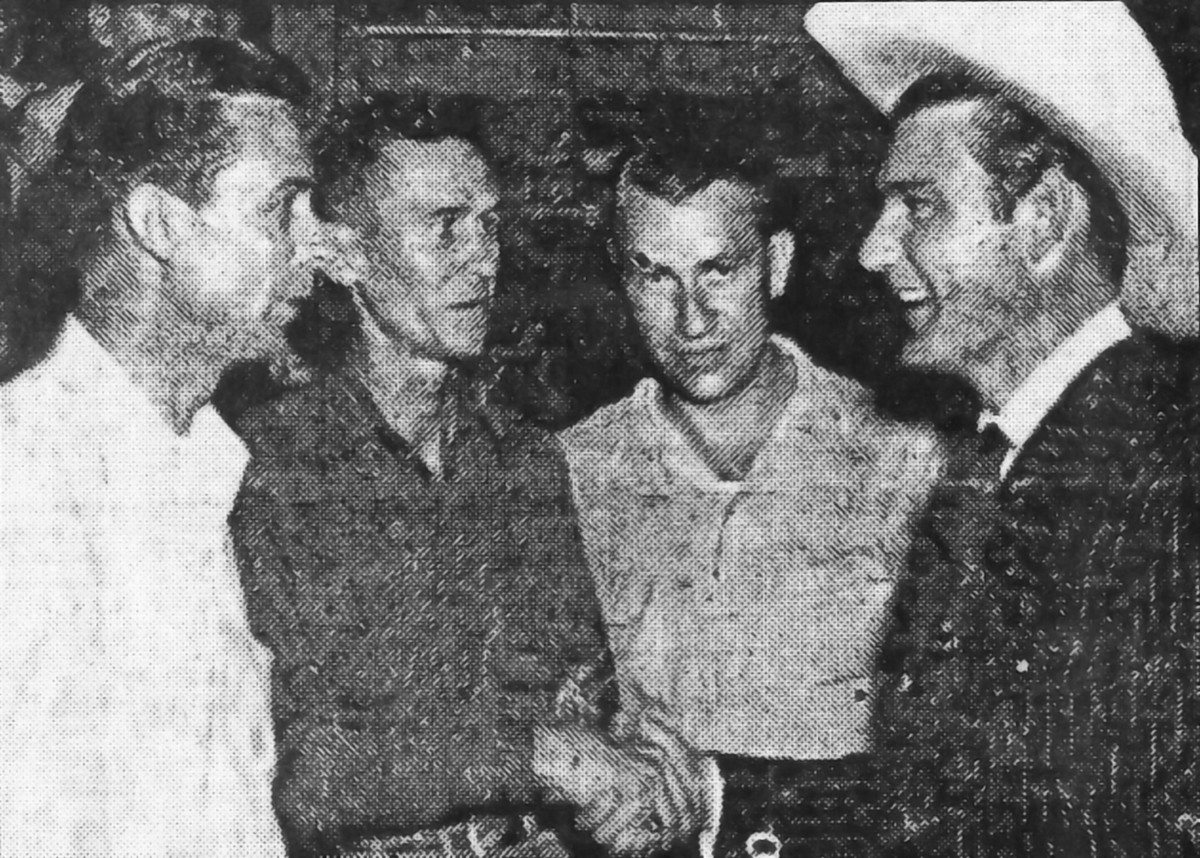 ‘Tex’ Williams, right, talks with Lotus McDowell, Walter Howard and Ed Torbeck during his visit to his hometown of Ramsey on July 1, 1948.