In its quarterfinals match on Saturday morning at state, the Vandals ran into a buzz saw that later in the day was crowned state champion.

Lena-Winslow, ranked No. 2 in the state prior to postseason competition, defeated Vandalia, 54-18, then won two more matches to win the Class 1A championship at the IHSA Dual Team State Wrestling Tournament at U.S. Cellular Coliseum in Bloomington on Saturday.
After beating Vandalia, Lena-Winslow defeated Beardstown by a similar score, 53-16, then edged Wilmington, 40-36, in the title match.
The results from the Vandals quarterfinals match are:
• 132 pounds – Hunter Luke (LW) defeated Jarrett Paslay (V), 4-2.
• 138 – Jeremiah Hermann (LW) defeated Logan Sullens (V) by fall at 3:13.
• 145 – Peyton Keeffer (LW) defeated Cody Phillips (V) by fall at 4:33.
• 160 – Kyle Kalkbrenne (LW) defeated Dustin Lott (V) by fall at 0:33.
• 170 – Rahveon Valentine (LW) defeated Robby Durbin (V) by fall at 0:22.
• 182 – Elijah Rowe (LW) defeated Hobie Booker (V) by fall at 0:32.
• 195 – Garret Stewart (V) won by forfeit.
• 220 – Brock Gobeli (LW) defeated Lucas Carroll (V), 5-1.
• 285 – Ian Kuehl (LW) defeated Anthony Enlow (V) by fall at 3:21.
• 106 – Morgan Dothager (V) won by forfeit.
• 113 – Austin Vincent (LW) defeated Zack Stephenson (V) by fall at 2:50.
• 120 – Tanner Swain (V) won by fall at 1:35 over Chris Hicks (LW).
• 126 – Winston McPeek (LW) defeated Bradyn Kaiser (V), 10-8.
Despite his team’s defeated in the quarterfinals on Saturday, Vandals coach Jason Clay still has much to feel good about when reflecting on the season.
“We finished 27-7 in duals and we won the regionals again,” Clay said.
“We had a great (individual) sectional at home, with seven guys advancing to state,” he said. “That’s a pretty good accomplishment for us.
“We had a great team sectional again, advancing to team state for the eighth straight time,” Clay said.
“That’s something that a lot of teams would love to have.”
Clay’s squad was able to achieve its regular and postseason accomplishments with a mixture of wrestlers.
“We had some younger kids with experience and some who did not have experience,” he said. “Anthony Enlow came in with a lot of experience in kids’ club wrestling, and Bradyn Kaiser was kind of the same, so they were able to step in and help us.
“Robby Durbin, Hobie Booker, Lucas Carroll, Dehaven Burgess, Dakota Gasaway … they were filling in with little to no experience, and they did a good job of growing and getting stronger throughout the season,” Clay said.
“We also had a nucleus of experienced guys, with Trevor (Philpot) and Logan (Sullens), Cody (Phillips) getting back from injury helped us a lot; I think that kind of solidified our team and helped us at the regional, and he was able to qualify for state as well.
“And we have Jarrett (Paslay) and Garret (Stewart), guys who have been in there quite a bit as juniors, and Tanner (Swain) and Zack (Stephenson) coming back after starting last year as freshmen,” Clay said. 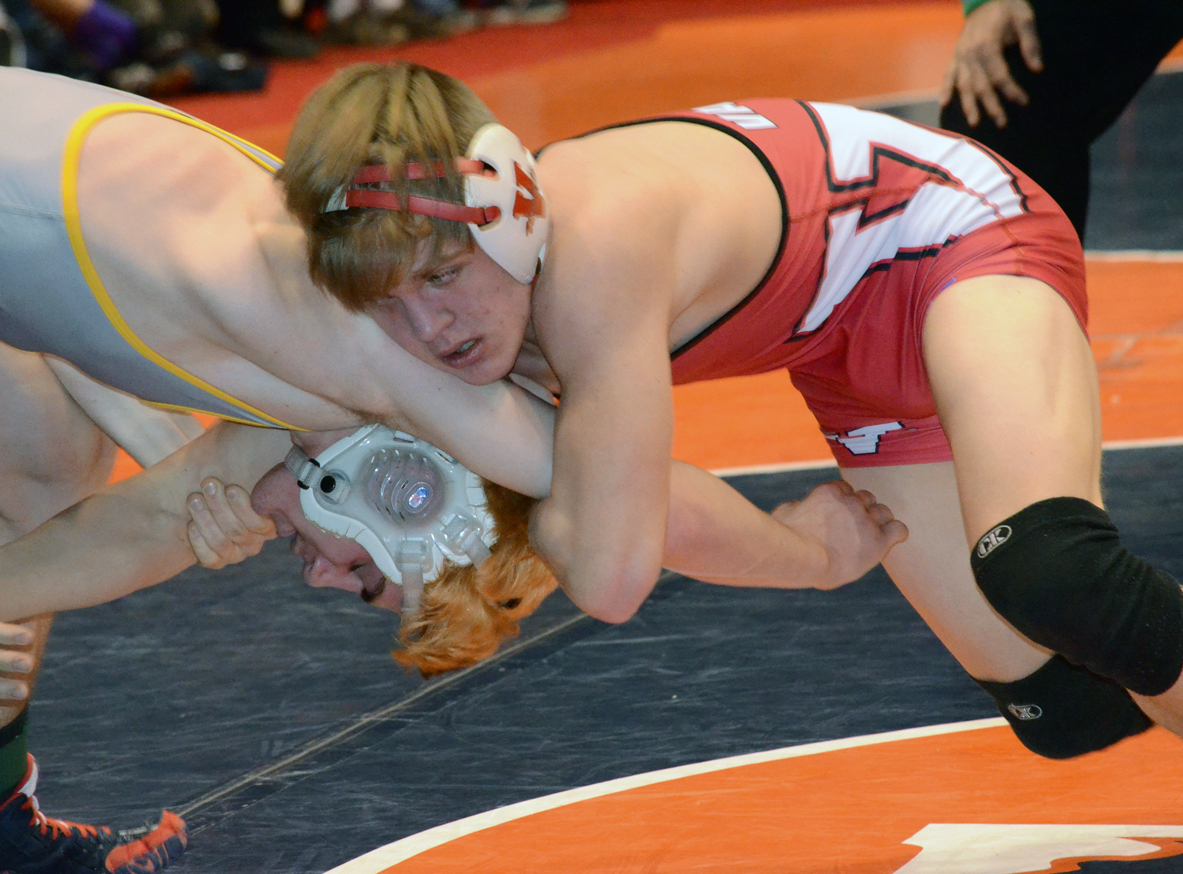 Vandalia’s Anthony Enlow battles Ian Kuehl of Lena-Winslow in the 285-pound contest on Saturday. Kuehl won by pin in 3:21. 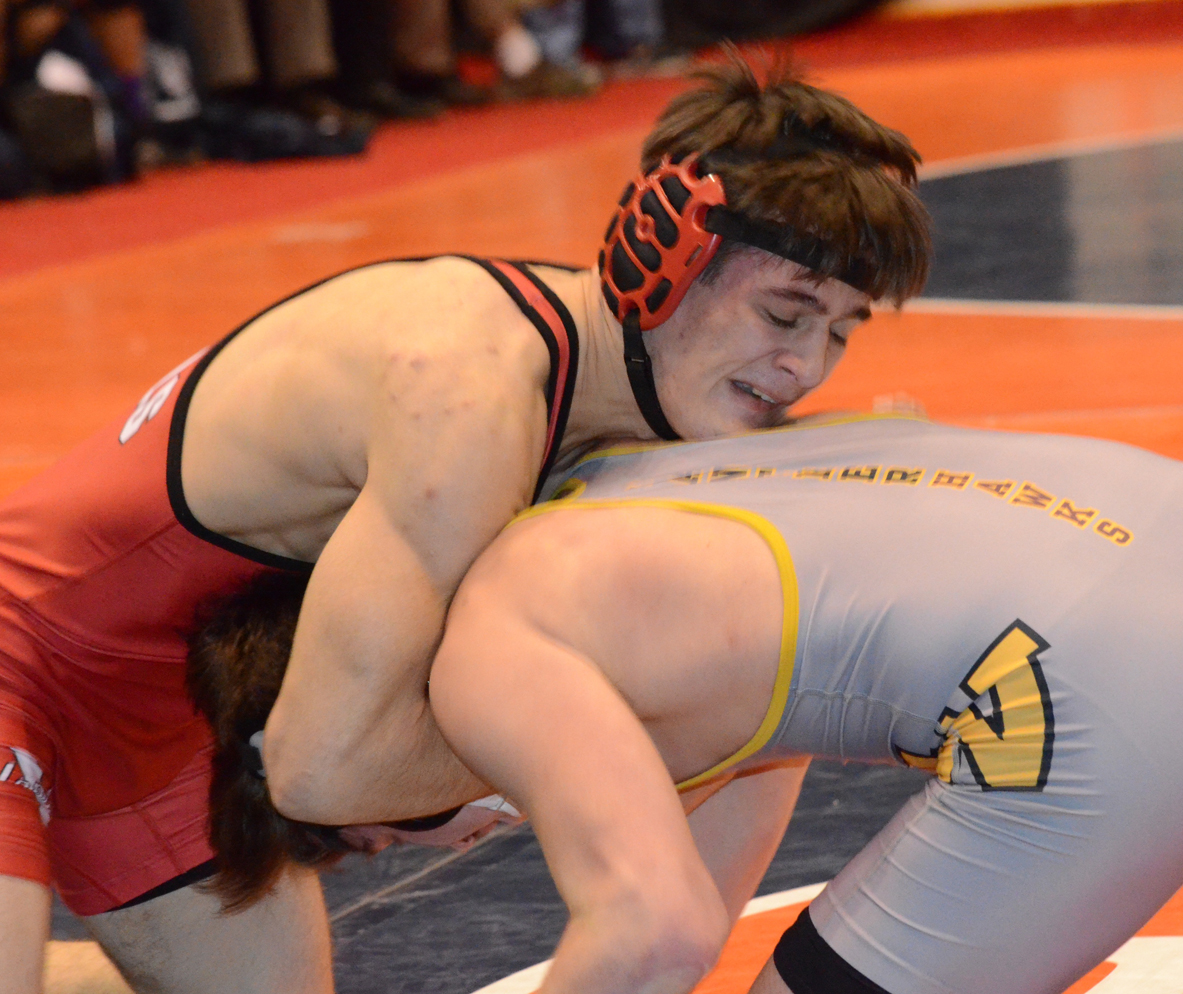 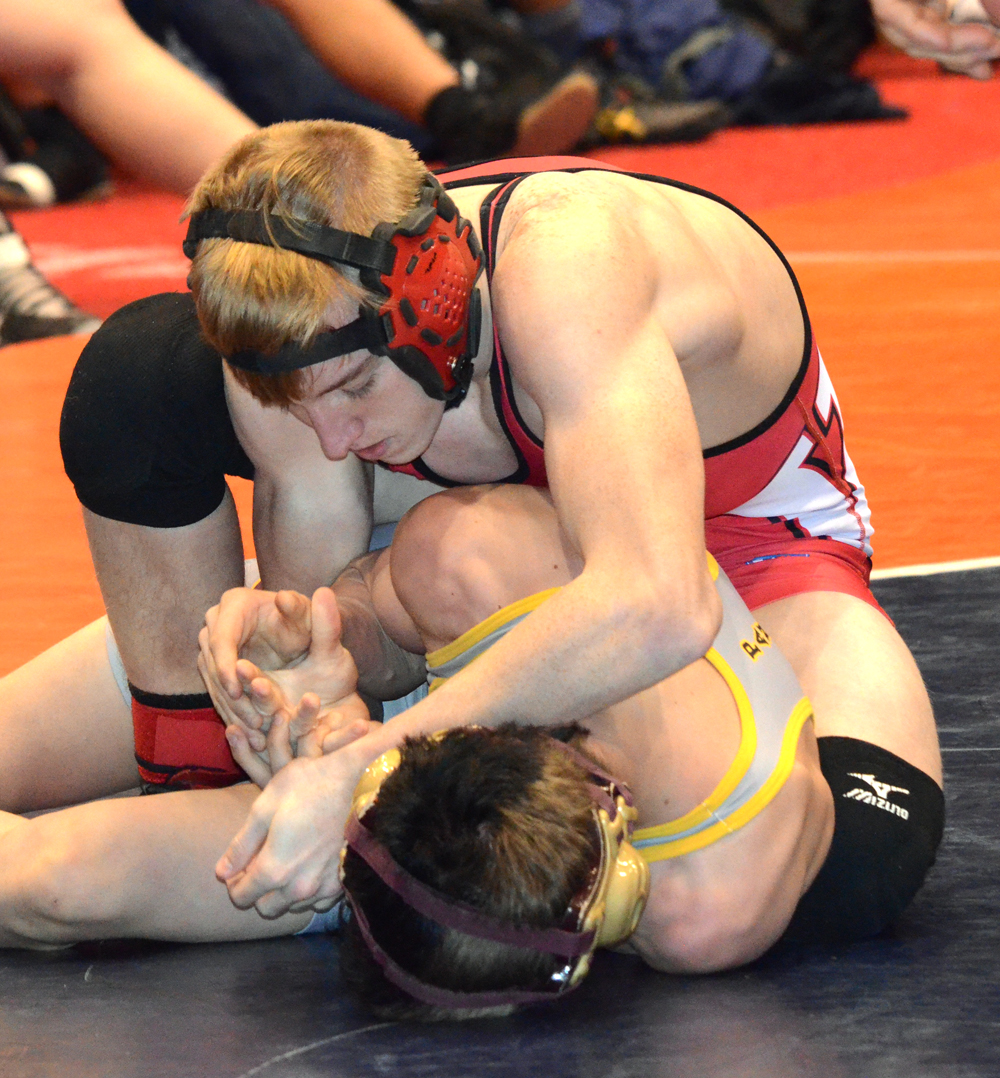 Vandalia’s Tanner Swain controls Chris Hicks of Lena-Winslow at the dual state tournament on Saturday. Swain won the match by fall at 1:35. 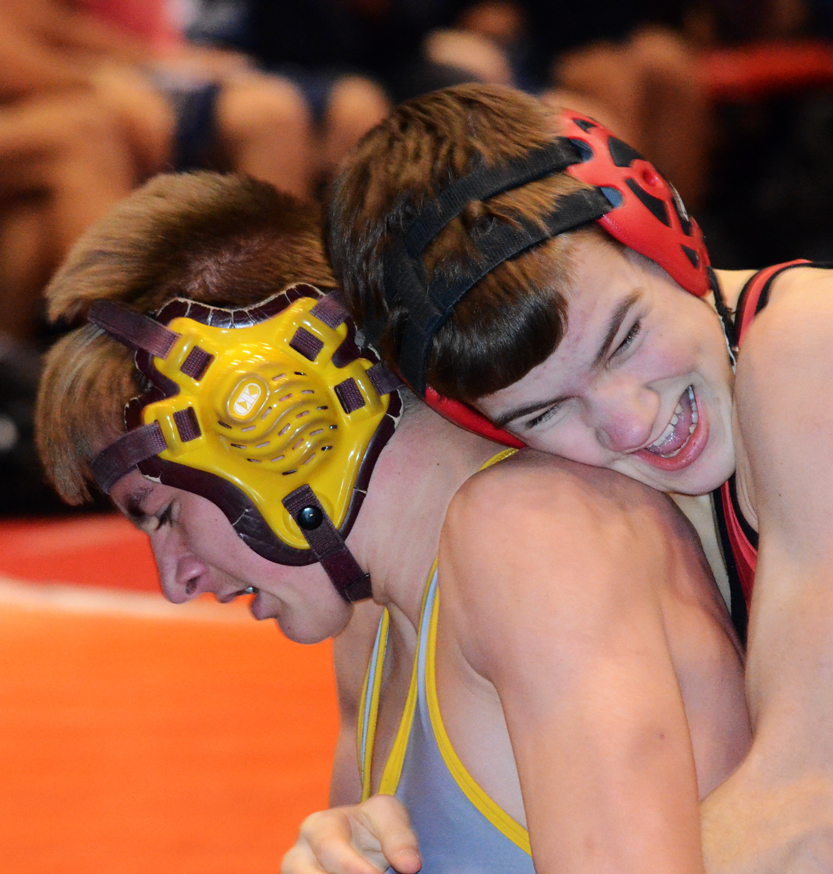 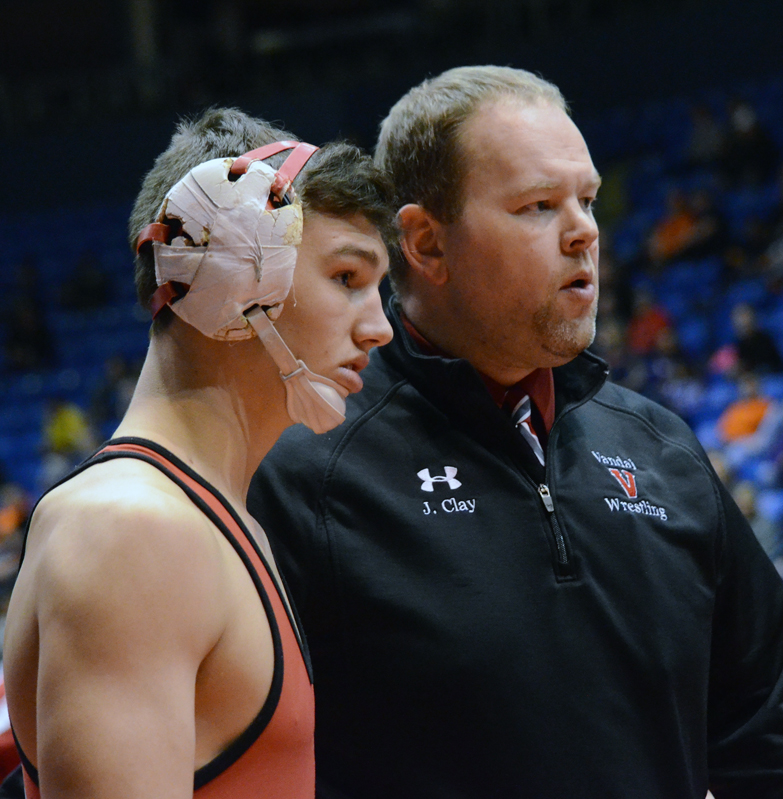