The Lady Vandals saw their season come to an end on Tuesday night, falling to the team ranked No. 2 in the state.

Vandalia defeated Red Hill, 59-42, on Monday to advance to the second round of the IHSA Class 2A Regional at Teutopolis.
Madison Klanke led the Lady Vandals with 17 points, and Olivia Marquardt was also in double figures with 12 points.
Anna Miller and Lanee McNary each had eight points.
The Lady Vandals led 21-6 after one quarter, then outscored Red Hill 19-10 in the second quarter to lead 40-16 at halftime. They also held a 15-4 edge in the third quarter in costing to the win.

Vandalia 46, Carlinville 45
With one of her best players sitting out most of the second half in foul trouble, Lady Vandals coach Michelle McNary had to rely on other players, including two freshmen.
And as Olivia Marquardt sat out almost all of the third and fourth quarters with four fouls, her teammates provided balanced scoring, with those two freshmen hitting key baskets in the 46-45 win over Carlinville last Thursday.
Freshman Lanee McNary hit a three-pointer with 1:30 left in the game, and fellow frosh Megan Kern scored the winning basket from underneath with 2.6 seconds remaining.
The Lady Vandals led 25-24 at halftime, and McNary felt that “we were sitting pretty good.”
Marquardt picking up her third and fourth fouls in a short period of time “hurt us, but we were able to keep the lead for a while with her sitting on the bench, so that was nice.
“They made a run and ended up taking the lead, so it was nice to see that we could just keep our composure and be able to come back like that,” McNary said.
“They (Carlinville) have won a lot of games, so I knew it was going to be a battle coming over here, especially with it being senior night, so it was a good win for us,” she said.
“Lanee hit a big three for us to tie the game, and then Megan comes up with the shot at the end to put us up by one,” McNary said. “Those were two big shots from two freshmen.
“Maddy (Klanke) hit some big three’s tonight also, and we needed that to just get us going, to make them switch defenses.
“Anna (Miller) did a nice job of taking care of the ball, and Molly Kern came in off the bench and hit some key baskets for us,” she said.
“It’s nice when you’ve got several people in the scoring column, and that’s often what it takes for us to get a win,” McNary said.
Vandalia – Miller 2 5-9 – 9; Austin 1 0-0 – 2; McNary 3 0-1 – 9; Klanke 3 0-0 – 9; Marquardt 2 0-3 – 4; Megan Kern 3 1-4 – 7; Molly Kern 2 2-2 – 6.
Three-point goals – McNary 3, Klanke 3. 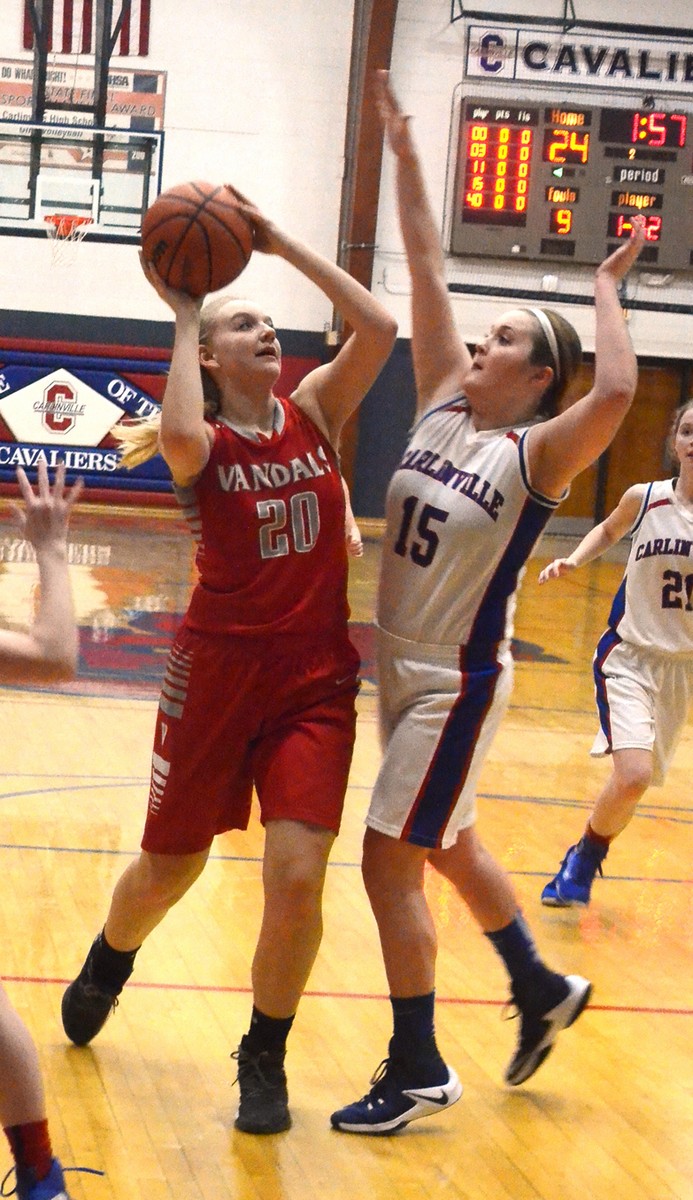 Megan Kern goes up for a shot in last Thursday’s win over Carlinville. Kern hit the game-winning basket with 2.6 seconds left.