“The first lodge of the Masons in Vandalia was chartered October 8, 1822 as Vandalia Lodge No. 8 with then Governor of the state, Shadrach Bond, elected M.W. Grand Master. This Grand Lodge held all its annual communications in Vandalia until 1828, when all was a blank until 1835 due to persecution.”

An article in The Vandalia Union on Sept. 25, 1924, reported that E.R. Turnbull of Carlinville, who was preparing a history of Masonry in Illinois, had brought that fact to light. The first Grand Lodge was organized in Vandalia on Dec. 9, 1822, and met in the Senate Chamber. Delegates from Vandalia were William H. Brown, James M. Duncan, John S. Duncan, Russel Botsford, E.C. Berry and John Warnock.
At the time of the 1924 article, Mr. Turnbull was looking for information and documents that would have proved the existence of the first lodge here. His information was subsequently published, and this is what led Richard Salisbury, historian and curator of the Masonic Museum in Centralia, to contact me.
As the historian, he wanted to know any biographical information on these first delegates. In answer to his request I prepared short biographies of these men that I thought Leader-Union readers might find interesting.
William Hubbard Brown was an early local leader in Vandalia. He served as one of three administrators of Ferdinand Ernst, whose Ernst Colony came from Hanover, Germany, in 1821.
He was editor of the Vandalia Intelligencer until February 1823. (His departure may coincide with a near riot on Feb. 12, when, because of their anti-slavery position, a mob threatened to throw the printing press in the Kaskaskia River.)  Brown was among the first members of the Presbyterian Church in Vandalia in 1827 and was among those who collected money for the construction of a Public House of Worship.
James M. Duncan, a brother of Illinois’ sixth governor, Joseph Duncan, was one of five trustees, the others being Elijah Conway Berry, James Whitlock, John Gorin and James Hall of the Vandalia High School, which opened in 1830. In June 1827, he was appointed, along with William Russell and Robert Blackwell, to be a judge for the Middle District, “to commence at the northern part of Town 7 and extend south to the township line between 5 and 6.”
John S. Duncan was practicing “physic and surgery” in 1821 in the Brick House occupied by Robert K. McLaughlin. Duncan went into partnership with Robert H. Peebles. He had previously practiced in Brownsville, Jackson County, Illinois. It is possible that he is also a brother to Gov. Joseph Duncan.
Russell Botsford was a local schoolteacher and brother of Mose Botsford, a hotel keeper. Following the robbery of the State Bank on March 26, 1823, the head teller, James Kelley, with some other men, dragged Mose to the woods, where he was tied up and whipped to gain a confession as to the robbery. They didn’t get it.
A month later, as Russell sat in a store and read, Kelley, the teller, paced back and forth in front of the store with a whip and loaded gun. A crowd began to gather. As Botsford emerged from the store, Kelley rushed him.  Botsford pulled a knife and stabbed Kelley six times – he died.  It was deemed self-defense, and Botsford was found not guilty. He disappears from our local records after this incident.
Elijah Conway Berry – born on Feb. 14, 1781, and died on June 1, 1849 – was territorial auditor at Kaskaskia and state auditor of Public Account at Vandalia, as well as president of the State Bank in 1837. His family Bible is on display at the Little Brick House Museum in Vandalia. His son, James, is recognized as one of Illinois early portrait artists. Elijah, wife Mildred (nee Stapp) and son James are all buried in the Old State Burial Ground.
Judge John Warnock was born in Charleston, S.C., and came to Illinois as a young man. He was the first judge in the Illinois Territory. He moved to Vandalia with the capital and was postmaster at Vandalia from Dec. 8, 1820 to July 31, 1827.
About 1832, he moved his family to Monroe County in Illinois, lived for brief periods in St. Louis and Alton, and later moved to Arkansas. He married Jane McClure of Mifflinburg, Mifflin County, Pa., who died in Monroe County in 1846. They were parents of nine children: McClure, Ann Eliza, Emily Dorothea, John States, Lafayette, Joseph, William Capers, Mary Catherine and Cunningham Sehon Warnock.
Robert H. Peebles was one of the first physicians in Vandalia and married Augusta Ernst, daughter of Ernst Colonist leaders Ferdinand and Marianne Ernst. He died in 1835, leaving his widow and son Ferdinand. He was a civic-minded man, pledging $10 for fencing of the public square, as well as $10 toward rebuilding the river bridge. At the time of his death, he also owned a steam mill. In 1840, his widow remarried, to Judge John Wilcox.
The present Lodge of Masons in Vandalia was organized on June 31, 1838, under the name of Temperance Lodge No. 27. In 1842, having received a charter from the state of Illinois, they closed Temperance Lodge No. 27 and opened as lodge No. 16.
With the removal of the capitol to Springfield in 1839, membership was at low ebb and the Lodge surrendered its charter to the Grand Lodge. The charter was returned to them on June 29, 1854, and nine years later, they built a Lodge building, pictured here. 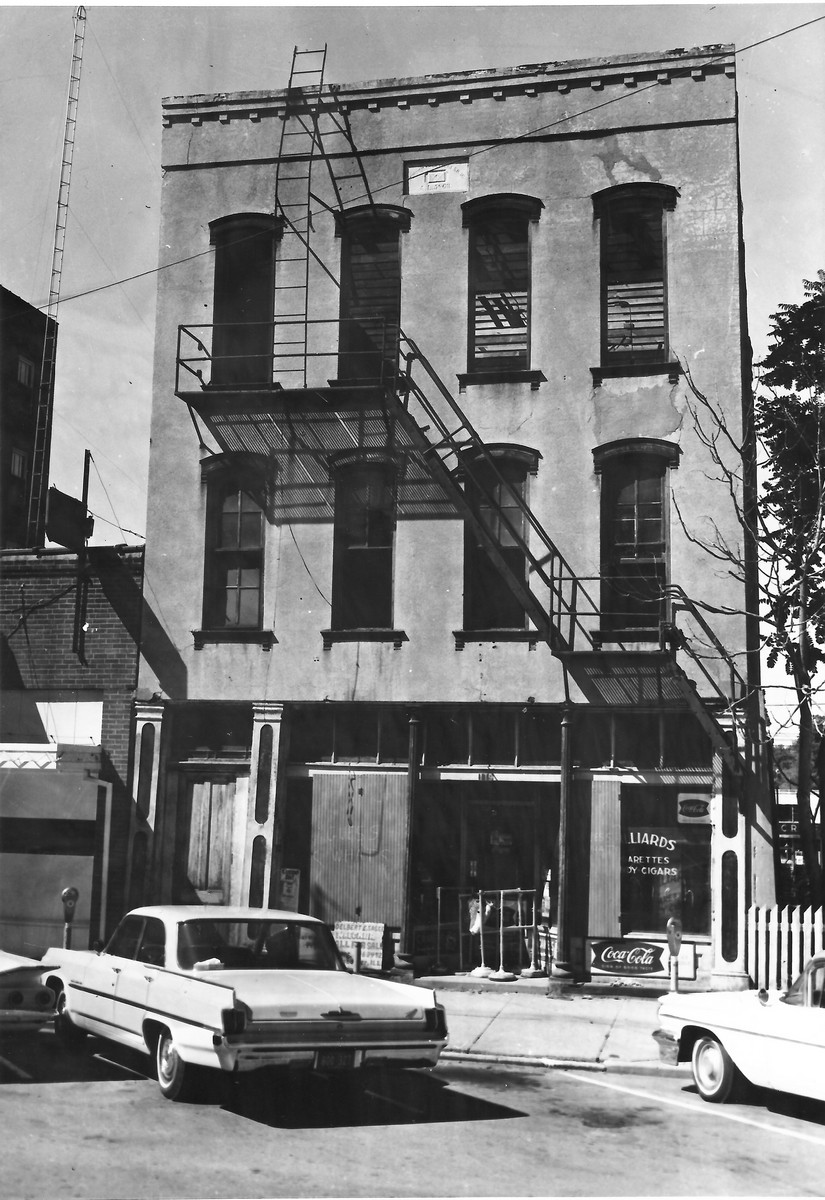