At a party recognizing one of the recent retirees of the Fayette County Sheriff’s Office, the treat for the honoree would likely be a cheeseburger instead of a cake.

That’s a treat that is now allowed, but only occasionally, for Phantom, the German shepherd that has been the partner of sheriff’s deputy Shawn Carter for about 7½ years.
Phantom and Carter have been a team since April 2008, when the 18-month-old search and apprehension dog was acquired by the sheriff’s office through local donations.
Though he still occasionally accompanies Carter on duty, Phantom is no longer certified to perform the tasks that he has as a full-time working dog.
“I can still use him for handler protection,” Carter said. “I still want him with me a lot of the time.”
The career of a law enforcement canine is typically nine-12 years, though in metropolitan areas it’s about three years, because those dog are worked on basically a daily basis.
During his career, Phantom has been used at least weekly, Carter said, for everything from narcotics detection and suspect apprehension to searching for a lost child.
It was time for Phantom to retire, he said, after a visit with St. Elmo veterinarian Dr. JennieAnn Heischmidt.
“His hips aren’t bad, but they are close,” Carter said.
Sheriff Chris Smith said, “The (law enforcement) canine’s life is a rough one, getting out of cars, getting excited whenever the squad car accelerates, getting thrown around – they go through a lot.”
But, even though he is officially retired, Phantom still lives the life of a working dog … for the most part.
“He’s still with me a lot,” Carter said. “And the only thing that maybe has changed is that his diet has changed a little bit.
“Before, I wouldn’t give him a bite of a cheeseburger. Now, I’ll give him a French fry once in a while.
“I want to keep him healthy, because I want him to be around. I want him to enjoy being a dog.”
Phantom is still a part-timer, accompanying Carter on trips to county schools and events, working in a public-relations mode.
“Shawn is awesome in working with Phantom with kids,” Smith said.
It’s been a good experience working with Phantom, Carter said, but he’s ready to move onto “something different.
“It has been the most-rewarding and most-frustrating part of my career,” he said.
“We have gotten to do everything that we were trained to do. We’ve detected narcotics, we’ve found lost kids and we’ve saved a couple of lives,” Carter said.
He’s ready to step away from being a canine officer, “because it requires giving 110 percent, and, because of my family, I would have been able to give maybe 95 percent.”
Phantom’s spot on the sheriff’s office staff has been filled by Tex, a Dutch shepherd that accompanies deputy Ronnie Stevens.
Tex was acquired through a grant the sheriff’s office received from the Howard Buffet Foundation, as well as the department’s drug seizure funds.
The $71,000 grant provided the funds for a canine, as well as the dog’s training and a fully-equipped SUV used by Stevens and Tex.
The dog purchased through the grant was unable to meet certification, so the sheriff’s office used drug seizure monies for a second dog.
The drug seizure funds are also used for ongoing expenses related to the canine unit, including food, veterinarian bills and a cage at the home of the dog’s partner, Smith said.
“But public donations would definitely not be turned down,” the sheriff said. “There’s still a large expense once we have a dog.”
A K-9 unit is a very valuable part of the sheriff’s office operations, Smith said.
“The dog helps out so much with public safety, with everything from tracking suspects, finding missing children and taking drugs away from the bad guys,” he said. 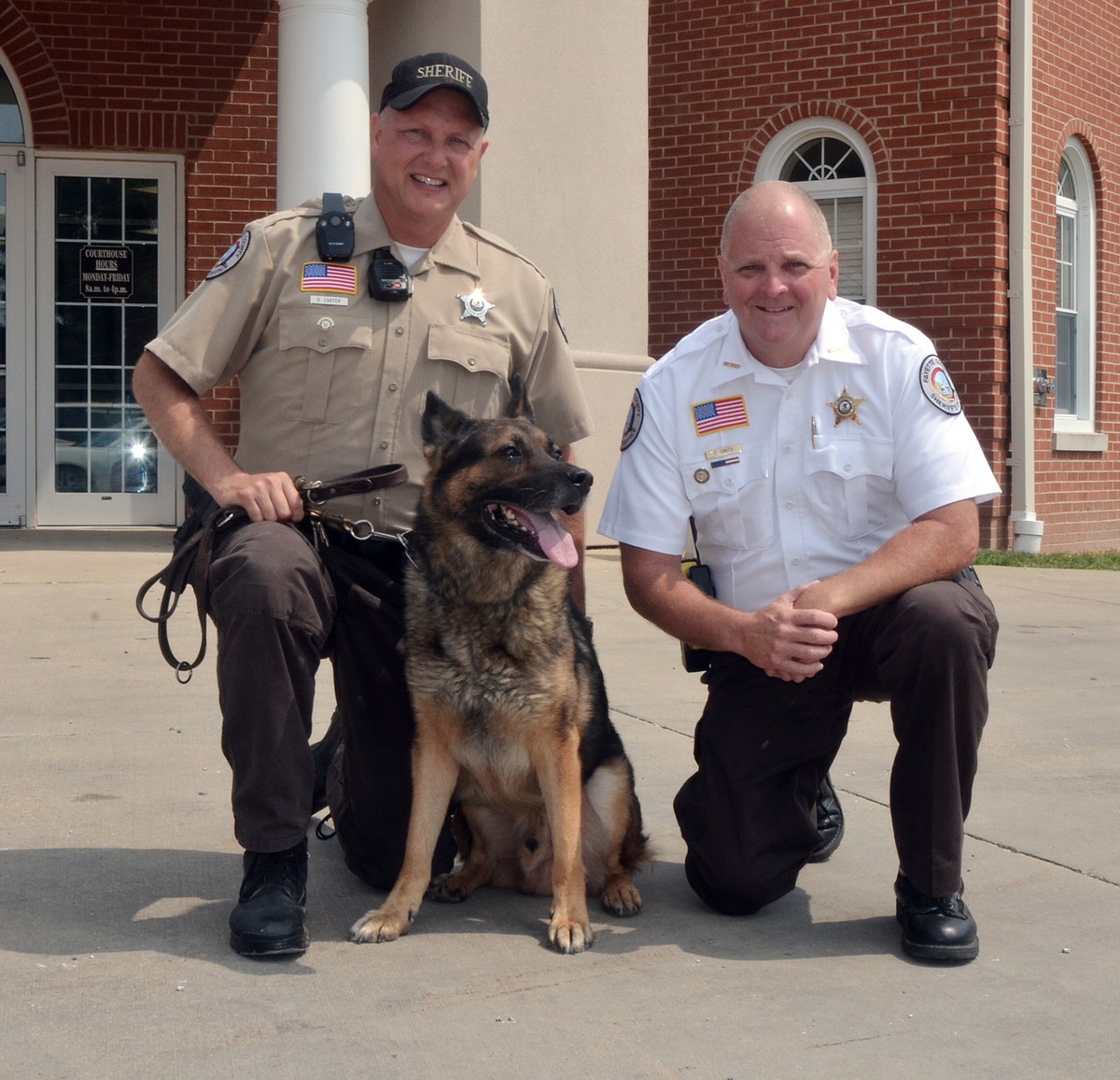 Shown with Phantom, the canine who has served the Fayette County Sheriff’s Office for the past 7 1/2 years, are his partner, deputy Shawn Carter (left), and Sheriff Chris Smith.