“We all looked forward to seeing him come down the road to our school at Bingham – it meant we wouldn’t have to do our schoolwork,” remembered 90-year old Wilber Meyer when asked about Jonathan Davis.

Davis was a self-appointed educator who traveled by foot visiting the one-room country schools in the northern part of the county. He talked to students about the dangers of tobacco and alcohol. Included with his lecture were poems and songs with a message that would hopefully help put them on the right road.
Jonathan F. Davis was born on Jan. 3, 1844, on Beech Creek in Wayne County, Tenn. His parents, Eliphas and Angeline Halford Davis, along with the Jonathan Halford and J.M.D. Halford families, came to Illinois in covered wagons, settling in Hurricane Township in 1847.
“I didn’t have a shirt on my back at that time, but my parents believed in progress and they put a shirt on me, and I’ve worn one most of the time since,” he remarked during a 1925 interview.
Jonathan and Elizabeth Rhodes were married on July 4, 1865 and became parents of seven children: Willis, Mary, James, Nancy, Naoma, Walter and Clara. A farmer for much of his adult life, Davis was a respected member of the Hurricane township community.
Jonathan had his own thoughts on many subjects and these are reflected in the pages of a booklet titled, “Jonathan F. Davis – His early Life, His Own Reflections, His Songs, His Principles, When He Becomes President,” published when he was 80 years of age.
In the booklet, Davis tells of his early life, split log seats, few books and wood stove heat. He also provides several generations of his family’s genealogy, which is a boon to researchers. His basic beliefs were that fresh air, plain food, regular sleep and kind thoughts would heal you of your diseases.
About 1910, Jonathan began to visit the various schools in Hurricane and Ramsey townships, talking to the children about the dangers of tobacco. He felt it should be prohibited because it “poisoned the non-users” and that tobacco use caused deafness, blindness, cancer, TB, insanity, apoplexy, dyspepsia, hardening of the arteries and heart disease, and lessened mental efficiency by more than 100 percent.
If elected president, the first thing he intended to do was to cut the salary by half. He would then stop the raising, manufacturing, selling or buying of “poisonous drugs to be used habitually.
“The next thing I am to do is to buy or build me a house to live in. I want a house that is healthy and cheap to keep up so my wife and I can have lots of fun. We don’t want to put any burden on the good people of the nation. With proper legislation the working class would not have to work more than four hours a day to make a good living and education of the children would be a priority.”
Jonathan carried a book with him on his visits to the area schools, where he asked the teachers to write a brief paragraph about their thoughts on his visit. He also listed the schools he visited, along with names of teachers, establishing a historical record. Some of the schools he visited were Prairie Mound, Bingham Public School, Pleasant Mound, Fair View, Little Hickory, Whitten, Mt. Zion and Craigtown.
The first entry in the book is dated Dec. 21, 1910. Ethel Lawson, age 22, was teaching at the Bingham school on Dec. 21, 1910 when Jonathan first visited the school. Malissa Sanders, age 19, was also teaching a class at Bingham.
Whitten School teacher Jennings Bolt had this to say about Davis: “Mr. Davis, the first man to drag the roads in Hurricane Township, visited the Whitten School and gave a very interesting talk to the children on their use in this world.” Davis traveled to the schools until he was in his late 80s.
Miss Della Brownfield’s class at Whitten School received a visit and talk on Dec. 27, 1918. Jonathan’s topic was on the “Use and Harmful Effects of Tobacco and other Narcotics.” He also entertained the pupils by giving several readings and songs, which were appreciated and enjoyed.
He even made his way to Vandalia in 1921, visiting Lincoln School and the classes of Mrs. Jessie Grissom and Alice M. Feery.
The late Audrey Halford Probst told the story that unknown to Jonathan, his wife, Elizabeth, liked her tobacco. In those days, they would buy tobacco to put in the chicken nests to keep out bugs, etc. Elizabeth would go to her brother’s to buy it and seemed, never have enough.
Jonathan would go with her and visit with her brother’s wife and one day she turned to him and said, “You know why she comes here, Jonathan – to get her smoke.”
It was not uncommon in those days for women to keep small pipes, and for all Jonathan’s lectures, songs and poems railing about the dangers of tobacco, his own wife, Elizabeth, was a secret smoker.
Jonathan and Elizabeth celebrated their 60th wedding anniversary in July 1925 and an article in the Ramsey News-Journal on Friday, July 10, 1925, carried the headline, “How Long Do Useful Men Live?”
The lead-in to the story told of how Jonathan Davis had made two attempts to walk to Ramsey the preceding week and had finally given up on account of the rain. The article went on to recap some of the Davis family history and tell of the trials of making a living in the mid 1800s.
Jonathan coined the following, “Death is natural, not a penalty.”
Jonathan F. Davis died on April 26, 1932, at the ripe old age of 88 years, 3 months and 23 days, with his wife, Elizabeth, preceding him by six years. In the case of Jonathan Davis, a useful man lives 88 years, 3 months and 23 days. 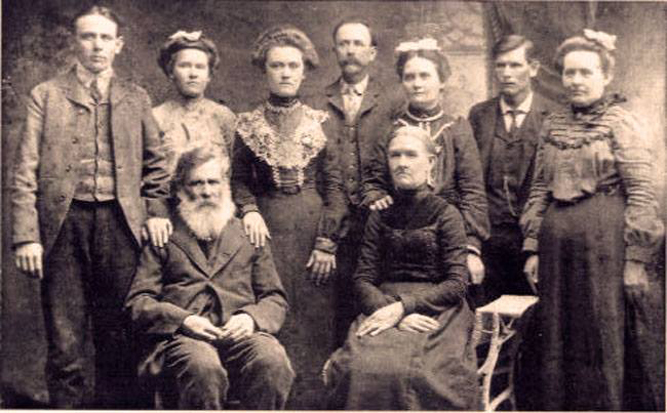