Fayette County’s sheriff told members of the county board on Tuesday that he is hoping to work with them on replacing a number of aging vehicles with high mileage in his fleet.

As part of his monthly report, Chris Smith presented board members with a list of sheriff’s office vehicles that includes mileage and condition issues.
At the top of that list is the 2005 Chevrolet Tahoe that Smith has been using as a squad vehicle. That vehicle had 183,400 miles on the odometer.
And, Smith said, “it’s in the shop again” needing transmission work. “It’s probably best that we say farewell” to the Tahoe, Smith said.
He also pointed out that a 2008 Ford Crown Victoria with 156,000 miles has rear-end and power steering issues. “It’s probably time to retire that one also,” Smith said.
One deputy is driving a 2006 Tahoe with 182,400 miles, and the fleet has 10 other vehicles with more than 100,000 miles. That includes a 2002 Ford Explorer with 217,400 that is driven by the jail administrator.
The only vehicles with less than 100,000 miles include the department’s 2004 Chevrolet van used for inmate transport, which has 99,500 miles, and two new Tahoes, one with 11,400 miles and one with 6,700.
The one with the lowest mileage was donated to the department, along with equipment for the vehicle and training for the department’s search and rescue dog, by the Howard Buffet Foundation.
A fourth vehicle with less than 100,000 (70,700) is a seized 2006 Pontiac GTO used by one of the deputies as a squad vehicle.
“We’ll figure something out,” Smith said. “Hopefully, we can make something happen.”
Also during his report, Smith introduced his department’s new jail administrator, Bryan Glidden.
Glidden succeeds J.D. Vieregge, who was honored by the board later in the meeting.
In presenting Vieregge with a plaque for his service to the county, board Chairman Jeff Beckman praised Vieregge both for his work at the county jail and with the Illinois Department of Corrections.
“He has given 34 years of his life to public service – that's a long time to give,” Beckman said.
At the end of Tuesday’s meeting, board member Wade Wilhour also recognized Vieregge.
For a long period, Wilhour said, “He was the go-to guy. He showed leadership.”
Wilhour noted that Vieregge was in charge during inspections of the jail “and we passed with flying colors.”
Smith also reported that he is looking into the department’s options for inmate meals once the current contract for that service expires at the end of November.
The department currently pays a local restaurant, Capitol View Steakhouse and Catering, $6.79 per meal, and the annual cost for the service has been $148,000.
Smith said that Glidden is checking with sheriff’s offices in other counties to see what they do to provide meals for inmates.
The sheriff also told board members that his department had received a $14,092 grant from the Illinois Department of Transportation for special traffic enforcement during holidays, from Thanksgiving through next June.
He also announced the receipt of a federal Department of Justice grant that will fund 50 percent of the purchase for new bullet-proof vests for his officers.
In other action on Tuesday:
• Beckman introduced Chad Austin, who was appointed to fill the District 3 vacancy that was created when Steve Knebel resigned in July.
• The board approved a three-year collective bargaining agreement with Laborers’ International Union of North America, Southern and Central Illinois Laborers’ District Council and Laborers Local 1197.
The agreement gives the custodian and maintenance employee a 2-percent increase in the first year of the agreement and 2½-percent pay hikes in each of the next two years.
The board was scheduled to also act on a three-year agreement with highway department employees, but Beckman said that there is an outstanding issue with that agreement.
• Fayette County State’s Attorney Joshua Morrison introduced the new assistant state’s attorney, Brenda Duke of Pana.
• The board observed a moment of silence for Cara Kelly, a long-time administrator of the Fayette County Health Department who died on Sept. 1.
• Wilhour, chairman of the board’s building and grounds committee, reported that there was a recent inspection of the courthouse for possible mold. “They didn’t find anything,” Wilhour said, adding that inspectors will be providing a written report.
• Darrell Schaal, chairman of the finance committee, reported that the committee had met with department heads to discuss the new county budget.
With the 2016 farmland assessments coming up, Schaal said, “coming up with revenue may be as challenging as the expense side.”
Schaal commended department heads for fine-tuning their budgets, with some coming in with budget totals equal to last year’s “or close to it,” and some presenting lower budget totals.
“Some that were up, we understand why,” Schaal said.
• At the close of the meeting, board member Glen “Whitey” Daniels again brought up the closure of the bridge between Thrill Hill and U.S. Route 51.
“I know there’s nothing the county can do about it,” he said. “Why can’t the city get together (and do something).
“To me, it’s a disgrace to the county, and we can’t do anything about it,” Daniels said.
Beckman added, “I know there are a lot of cars that use (that road),” noting that a traffic study showed that 600 cars a day were on that stretch of road. 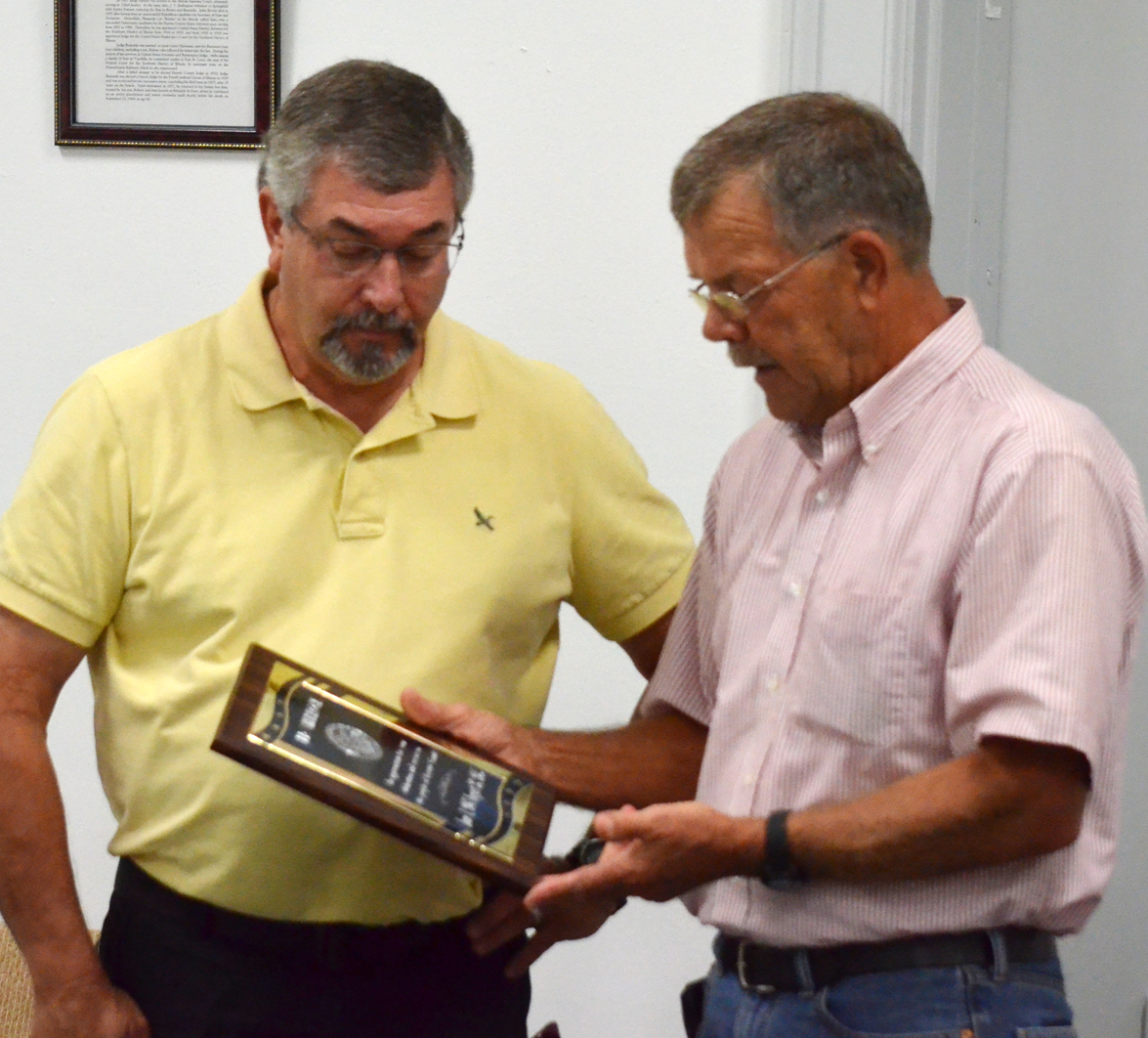 Fayette County Board Chairman Jeff Beckman, right, presents during Tuesday’s county board meeting a plaque to J.D. Vieregge for his service as the county’s jail administrator. 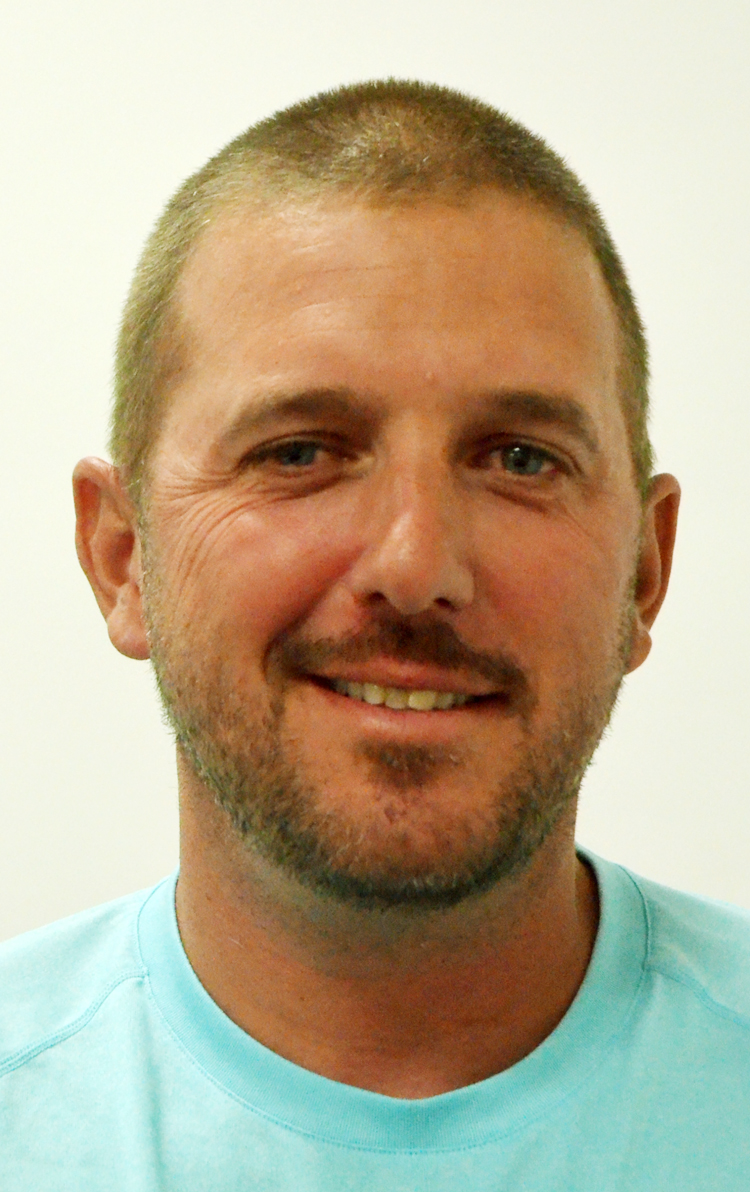