The Historic National Road Association of Illinois has placed 20 attractive, commemorative Kiosks in 19 communities along the National Road, all containing interesting historical information about the villages and towns, and the road. Fayette County has three of them in St. Elmo, Brownstown and Vandalia.

The kiosks are attractive additions to the roadside, and each one is different, as it is a tribute to, and tells a story about, the town or village in which it is located.
This week, the focus is on St. Elmo. Its story is unique in the fact that it was a small, peaceful agricultural community until the 1930s oil boom hit it, with people from several states arriving … and no place to put them.
The people in St. Elmo, Brownstown and other nearby villages and towns turned every available space into living accommodations for the sudden swelling of population, including spare rooms, garages, sheds and basements..
The oil companies built “communities” with nice homes, recreational buildings and a large, brick school, playgrounds and meeting halls. These communities, built by the oil companies for the oil workers and their families near the oilfields, were named Carter’s Camp, William’s Camp and Fortner’s camp.
The word, “camp,” however, grossly misrepresents the living conditions. They were neighborhoods, with streets, nice homes, lawns and garages.
Some of Fayette County citizens today citizens today can recall when they lived in the camps as children, and all said they were comfortable and happy living there.
All kiosks are placed along next to the road and are easily accessible, whether on foot or by a vehicle,
The kiosks, also known as storyboards, have a blue, informational patch on the right end, as well as the symbol of the Historic National Road.
The National Road, now U.S. Route 40, is the first and only highway in our country that was federally funded.
St. Elmo Kiosk
It is documented that Howard’s Point was named St. Elmo after a railroad station bearing that names. While some of these small settlements grew into cities, others faded away as the residents moved on to more promising locations.
The St. Elmo kiosk tells about the sudden, almost unbelievable growth of St. Elmo, a small, quiet agricultural, community that became a thriving town when it became the center of the 1930s oil boom.
The St. Elmo kiosk reads, “St. Elmo history is rooted in the dust of a settlement named ‘Howard’s Point.’ Hamlets like Howard’s Point relied on the National Road to sustain their businesses.”
Families came with the oil boom from other states, including Oklahoma and  Texas. Many families stayed after the boom and became lifelong members of the communities, while others followed the oil companies to other locations.
The kiosk features points of interest, such the airport in St. Elmo, Smith Aviation Field, which was a real asset to oil company executives and was also frequently used by internationally famous American pilot Charles Lindbergh (a frequent visitor) and equally famous Amelia Earhart.
Also featured with text and photos is the Elmo Hotel, with a photo of a smiling gentleman posing as if he is pulling an Elmo Hotel luggage cart, with a pretty lady on it. It is somewhat of a mystery photo, as no one can be found to identify the subjects. The photo was donated to the St. Elmo Library, but the person who donated it doesn’t know the names of the man and woman.
Also pictured are a busy downtown St. Elmo street and oil rigs.
The kiosks furnish enough information that stirs the interest of the viewers enough that they want to learn more about the town, its rich history, the town today and the people in it.
We appreciate the National Road  Historical Association for the tributes in the form of the kiosks to the pioneers who carved these communities out of what was originally wilderness, and to the descendants and others who came to help build and maintain the history and traditions, as well as those who brought new methods, ideas and businesses to the hamlets and communities.
The St. Elmo Kiosk is placed on the south side of U.S. Route 40, in front of the Phillips Building and St. Elmo Library. 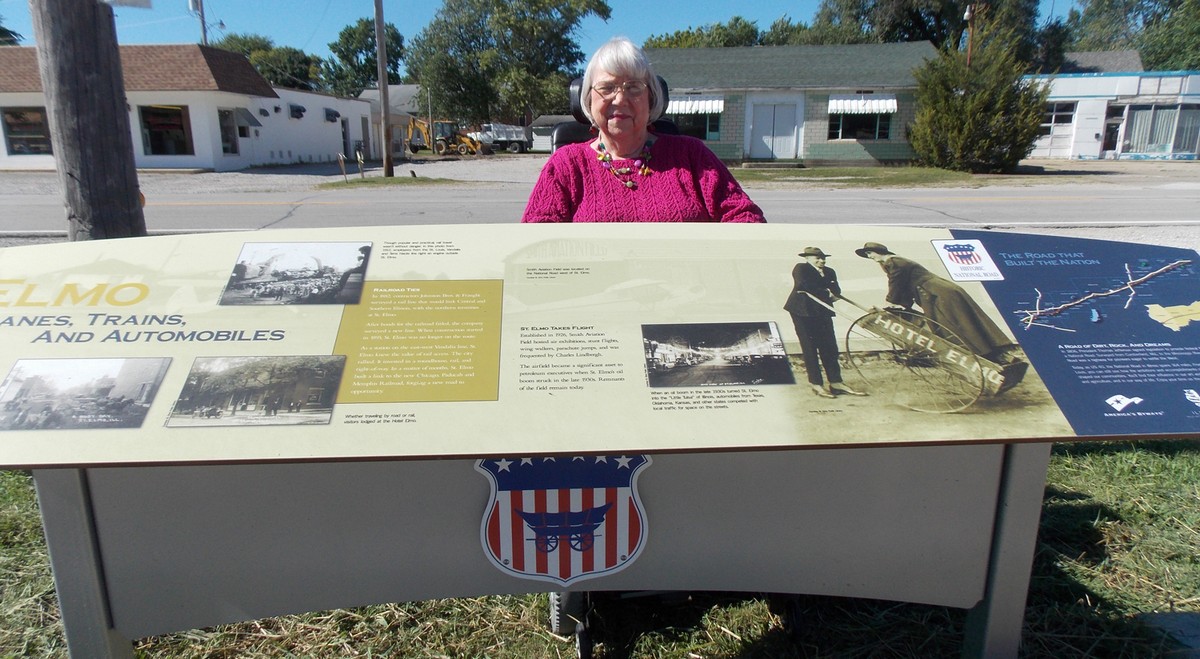