Last week, while working on a research project that required searching back issues of The Vandalia Union, which are available on microfilm at Evans Public Library, I came across an article in the July 28, 1938, edition titled, “The Editor Cruises Around Town on A Dull Summer Day,” by Editor Ira Lakin.

The writer began by stating that Friday, July 22, was a dull mid-summer day, with little excitement and nothing out of which to make a newspaper story. So, he hired himself out, climbed aboard his “bus” and cruised around town looking for a story.
One of the first places he journeyed to was the park, where he found about 40 youngsters playing around the various pieces of amusement equipment. At the ball diamond, a score of boys were having a game, while a similar number looked on. Coach Luke Ashby was preparing the tennis courts for play, and two or three picnic parties were going on.
Stopping at the ice plant, which was situated near the entrance to the park, he spent 15 minutes with the plant manager, Ora Fannon, who explained how the ice was made. The plant is owned by Illinois Iowa Power Co. and was working full capacity to turn out 20 tons of ice per day.
The ice is made from the city’s pure water supply, with further purification and air conditioning. Six tons of ice is shipped to Greenville daily, with Brownstown and Ramsey each drawing on the plant for a portion of their daily supply.
Oscar Williams had established a route out in the country west and southwest through Hagarstown and Pittsburg, making two trips daily.
With a storage capacity of 550 tons they had no problem keeping up with need, said Fannon, who had been plant manager for 10 years.
Out on the shoe factory hill, more than 200 cars were parked, and on the inside of the four-story building 700 or 800 people were busily engaged, turning out high-grade shoes that have made the Johnson, Stephens & Shinkle Shoe Co. famous.
The editor reflected that this plant running steadily affords a good quarter of a million days work in the course of a year for its employees, turning loose from three to four times that many dollars to make the retail business what it is in Vandalia.
Steam was up and the machinery buzzing at the Ford Roofing Products Co., where a dozen different brands of roofing papers are made to be shipped all over the world.
One hundred forty or 150 families are clothed and fed as a result of the steady work of the employees here. This factory, too, has carried the name of Vandalia to every part of the country and helped to make it famous.
What he termed a “growing industry” was St. Louis Dairy on Fifth Street, located in the old Craycroft building. The second floor had been torn away and a new roof put on, with an addition made to the existing building. Lakin commented that it was the largest industry of its kind in the county, shipping its principal product to the St. Louis market.
The Vandalia Dairy Co., which uses part of the milk to make butter, also ships from Vandalia.
Two other important milk distribution systems were the VanZandt Dairy, west of Vandalia on Ill. Route 140 and Beccue Dairy on North Second Street.
Some idea of the amount of oils and gasoline consumed in this community may be had by cruising around as the editor did, and seeing the huge tanks of the various distributing plants.
Up in the north end, along the Illinois Central, are the bulk plants of the Phillips Petroleum Corp., the Fayette Service Co. and Vandalia Oil Co.
Down nearer the depot are the Deep Rock Oil Co., Ohio Oil Co., and Texico bulk plants.
On farther south along the same right of way are the Johnson Oil Co., Shell and Elam Grain Co. bulk plants. Out in the west end along the Pennsylvania Line, near the Ford Plant, is Standard Oil Co., with 11 of these tanks that supply their products to perhaps more than a hundred outlets in the county.
The editor ended his little jaunt by visiting the Community Sale conducted every Friday by Fred Chappelear, who also conducted the Economy Feed and Milling Co. business. Here, there were 300 farmers and others milling around a ring inside the sales room, bidding on and buying 100 head of hogs, 30 cows and calves, 12 head of horses and other stuff, a usual Friday afternoon sale.
Lakin wrote, “These sales are one of the best drawing cards the retail merchants of this city have. This is a Saturday town, but it is also a Friday town, a Monday, Tuesday, Wednesday and Thursday town.”
Our traveler’s final comment was that it had seemed like a dull day when he first left his desk this particular Friday, but there was a heap of business going on out around the edges, business that one does not realize is there if he sticks close to Gallatin Street.
World War II was three years away. 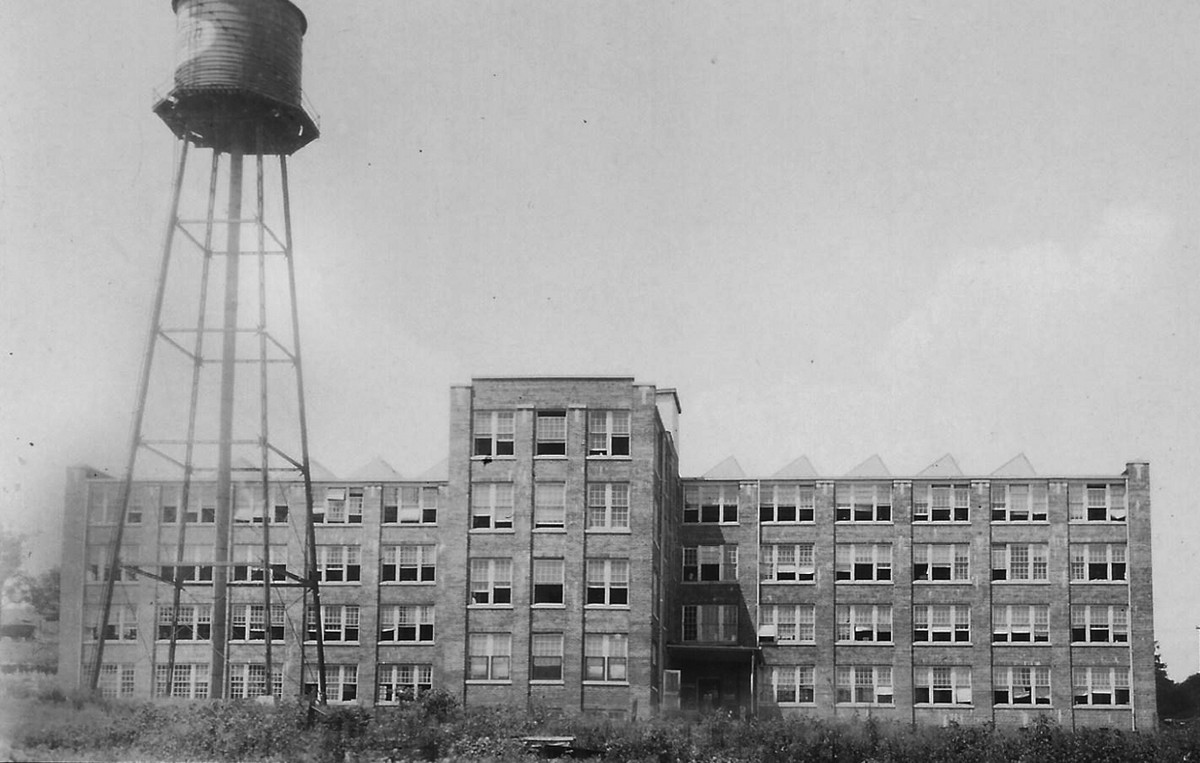 The Johnson, Stephens & Shinkle Shoe Factory was located near the top of the Randoph Street hill, south of Locust Street.