Dre Hill and Brett Harmeier each homored for the Cougars, with both also getting two hits in three at-bats and collecting three RBI’s.
Trevor Markley, Dylan Smith and Trent Geiler each had two hits as South Central improved to 2-0 on the season, while Brownstown/St. Elmo dropped to 1-4.
Ratermann picked up the win for South Central, allowing just one hit while striking out four and walking one.
Nate Matthews got both of the Bombers’ hits, one of them being a double.
Landon Feezel took the loss for South Central.

South Central 5, Edwards County 3
South Central improved to 3-0 on the season with a win over Edwards County on Saturday.
Noah Powless went 3-for-3, with two doubles and two runs batted in to lead the Cougars offensively.
Dylan Smith’s two hits included a triple, and Brett Harmeier also had two hits. Gavin Rattermann was 1-for-3 with an RBI.
Noah Powless got the win in relief, giving up three hits and two runs in 2 1/3 innings. He followed Dylen Brauer, who allowed five hits and one run while striking out three.

St. Anthony 12, BSE 2
Effingham St. Anthony scored three runs early, then added eight in later innings in posting the win over the Bombers on Monday.
St. Anthony scored twice in the first inning, one in the third, three in the fourth, five in the fifth and then one in the sixth to close out the 10-run rule game.
Lewis Brown and Nate Matthews each had one hit for BSE, and Noah Flowers contributed an RBI.
Flowers took the loss for BSE.

SOFTBALL
Nokomis 9, SEB 4
Nokomis scored nine times over the first five innings to drop St. Elmo/Brownstown to 1-7 on the season last Thursday.
Stephanie Calhoun and Kyrstyn Fitch each had two hits for SEB, with one of Calhoun’s hits being a two-bagger. Baylee Scholes also doubled for the Lady Eagles.
Fitch, Scholes and Courtney Russell each had an RBI.
Scholes took the loos, giving up nine hits and nine runs, five of them earned. She struck out one while walking three.
“We played well tonight,” said Lady Eagles coach Tom Fedrigon. “We just could not sustain a rally on the offensive side.
“Nokomis did their part in that they played very solid, errorless defense,” he said.

Teutopolis 18, Vandalia 0
The state’s top-ranked team in the state held the Lady Vandals to two hits in the 10-run rule game last Thursday.
Mikayla Ruot and Gracie Morrison had the Lady Vandals’ only hits in the game.
Teutopolis opened with nine runs in the first and added one in the second before scoring four times in both the fourth and fifth innings to close out the game.
Daryn Waddell took the loss for Vandalia, striking out two and walking six while allowing 14 runs. Molly Kern pitched the final inning, striking out one and giving up for hits.

Greenville 15, BSE 3
The Lady Comets opened with five runs in the first inning and added seven more in the second on their way to a win over the Lady Eagles on Monday.
Sydney Moss and Baylee Scholes each had two hits for St. Elmo/Brownstown, and Kyrstyn Fitch, Stephanie Calhoun, Audriana Pruett, Jenna Long and Courtney Russell each had one hit.
Moss, Long and Delaney Schulze had the Lady Eagles’ three runs batted in.
“In our first home game, we were three players short,” said Lady Eagles coach Tom Fedrigon. “That is hard to make up for against a team like Greenville.
“We still need to sharpen up our defense some,” he said.
“We had a lot of girls take good at-bats again tonight; we just need to keep pushing until we can get to full strength.”

Stew-Stras 7, South Central 1
Stewardson-Strasburg limited the Lady Cougars to four hits in recording the win on Monday.
Mia Campbell doubled and singled for South Central, Serina Lee also doubled, and Abby King provided the other hit, driving in the Lady Cougars’ lone run.
King took the loss, giving up three runs and six hits while striking out six and walking one. Kanady Grzegorek pitched the final two innings, allowing four runs and four hits while striking out two and walking one.
The Lady Cougars dropped to 0-2 in National Trail Conference play and 0-3 overall. 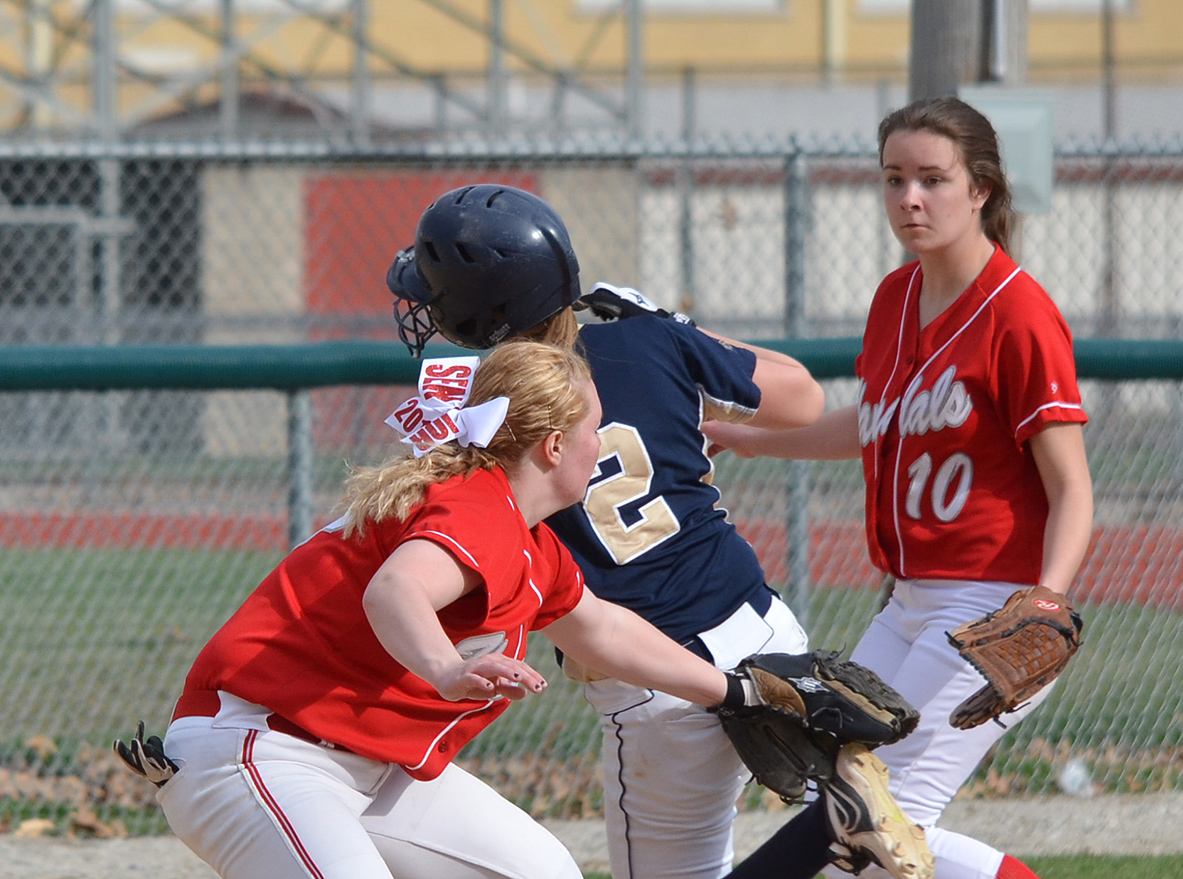 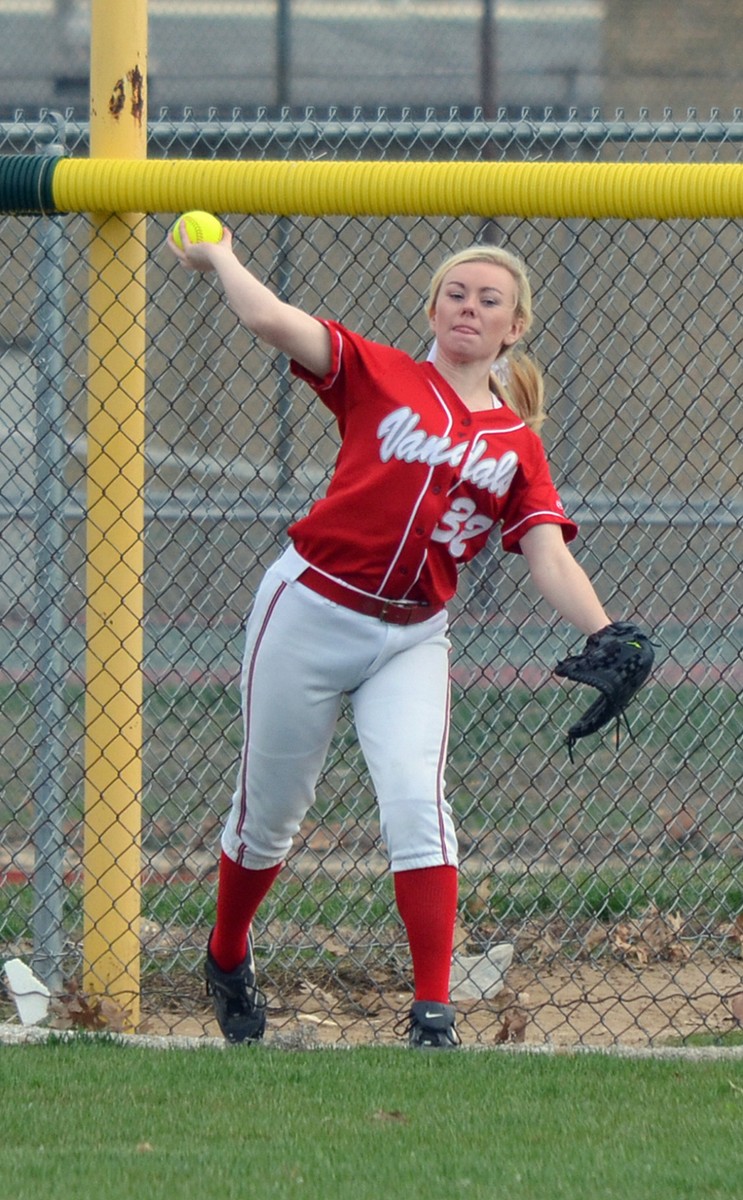