Chloe Nichole West was only 13 months old when she was diagnosed with pre B AL leukemia, which she battled for the next six years, until she passed on May 23, 2013. Her paternal grandmother, Jeanie West, shared Chloe’s story and expressed the desire for others to send new toys to Children’s Hospital in St. Louis. Chloe parents are Brian and Rebecca (Kathy) West.

“Chloe began having problems when she was 6 months old,” grandmother Jeanie West said. “She began having knots appear on her head.”
She was taken to several cities, hospitals, trying to find a diagnosis. At one point, she was thought to have meningitis, “because her legs stopped working and her legs would hurt when she tried to walk,” Jeanie said.
After X-rays, blood work and numerous other tests, Chloe was finally diagnosed with leukemia.  Although the blood tests and other tests and exams were sometimes very painful, Chloe maintained an upbeat attitude, and never lost her smile and sunny disposition, a miraculous gift of fortitude and tolerance that many children with serious and devastating illnesses possesses.
The essence of femininity, the little girl loved pretty clothes, especially colorful tutus. She liked having her nails polished, especially when company was coming.
“She received a bone marrow transplant, which was a perfect match and seemed to help her a little while.” Jeanie said. “She had to be there for 100 days and she spent so many days in the bone marrow transplant room.
“After so long, everything seemed to be going good, so they moved us to the Ronald McDonald House. They didn’t want us to be too far away, in case something went wrong.
“Things seemed to be doing fine, then she started having trouble with her legs,” Jeanie said.  “Her leg started swelling and was deteriorating, because it was in her leg. They did a biopsy of the bone and found she had cancer
“It might have been about a year,” Jeanie said, “when they discovered the cancer. Then her face started swelling in the sinus cavities and it seemed like they would get one thing taken care of, and we would think we were doing good, then it would be someplace else.”
“She wasn’t quite 4 when they told my son that she had it again and they couldn’t do anything with it,” Jeanie said. “So Becky got on the phone and called every state, making about 500 calls, and asked them, ‘Can you help my daughter?’
“A hospital in Maryland accepted her, and we headed for Maryland. “
“They ran so many tests,” Jeanie said, “and when we left there, Chloe wasn’t walking anymore, and she was in so much pain.”
St. Louis Children’s Hospital was able to take Chloe, due to some added information from the tests that had been performed, so she was flown back by helicopter, bringing her closer to home.
Chloe wanted to go to Disneyworld, so Brian wanted to take her. He was advised to take her before the middle of May, because she wouldn’t be able to handle it after that.
Chloe was looking forward to having Dinner with the Princesses. She became ill and they knew they had to return home. However, their last night there, she did get to enjoy the Dinner with the Princesses, and she took photos with a camera the nurses in St. Louis had given to her.  She was very happy and excited.
“She told a nurse that when she grew up, she was going to be a doctor.  She then looked at Jeanie and said, ‘Grandma, am I going to grow up?’”
Join A Toy Drive in Memory of Chloe
Chloe passed on, happy and surrounded by loved ones. She would have been 7 years old on Feb. 28. To celebrate Chloe’s life and her love for others, her family wants to have a toy collection for the children at  St. Louis Children’s Hospital.
The family wants to take the toys to the Children’s Hospital toward the end of February, as this is Chloe’s birthday month.
The hospital gives a toy to the children when they are admitted, getting a test, etc. Jeanie said that Chloe always enjoyed getting a toy from the toy box.
Jeanie noticed the toy box was getting very low on toys, and she wants to replenish it through a toy drive in memory of Chloe West.
Toys must be new and in boxes because of very sick children. Items are needed for newborns to those of high-school age. If you do not want to shop, monetary donations are appreciated and the family will do the shopping for you.
Drop-off boxes for toys are located in: Vandalia-County Market; St. Peter-call Taylor’s Sales & Services  (349-6364) to arrange for a pickup; and Effingham-Don Hecht, Culver’s and Panda Express.
For more information contact Jeanie West at 217-821-3210 or Meronda Barnes at 780-5437. 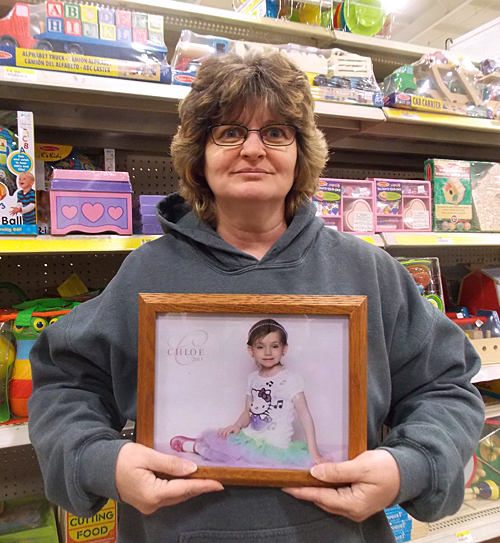