Winning an individual title at the Princeton Invitational Wrestling Tournament is no easy task.
But Vandalia's Jake Stewart pulled off the feat.
A VCHS senior, Stewart took first place at 182 pounds at Saturday's event. The tourney is often referred to as "mini-state," due to the tough competition.
And Stewart topped the field at 182, leading the Vandals to a fourth-place finish in the final team standings.
"He's only the fifth wrestler from Vandalia to win a title at Princeton, and we've been going for 15 years," Vandalia Coach Jason Clay said.
"It's pretty prestigious," Stewart said of the title. "Only four other wrestlers from Vandalia have ever done it, so I feel like it's an honor."
As far as the team finish, Clay was pleased.
"It's a very tough tournament," Clay said. "There were 33 teams and we came in fourth. We had a good weekend. We did a real job on Saturday. We had three guys in the finals, and that's the most we've had in as long as I can remember. So that was pretty neat."

Stewart wasn't the only Vandal to have a solid showing.
Dalton Blankenship and Bobby Bradley fell in their respective title matches, settling for second place.
Dakota won the tourney title, with Byron and Mercer County finishing second and third. Vandalia was fourth and Coal City was fifth.

Weight by weight
Vandalia's Trevor Philpot was unable to place at 106 pounds.
Princeton's Tyler Wood defeated Philpot, 7-0, in the first round. Philpot beat Tyler Lowry of Dixon, 8-4. Philpot then lost his final match by injury default.
Jarrett Paslay finished seventh at 113.
Paslay lost by fall to Noah Mayes of Auburn, but beat Joel Cook of Pittsfield, 5-2. Paslay pinned Caleb Boudreau of Manteno, and then lost to Drake Stirn of Mercer County, 4-2. For seventh, Paslay defeated Jake Hiles of Coal City, 6-2.
Next, Chaston Womack finished sixth at 120.
Womack pinned Matt Heren of Auburn, and then lost to Trevor Bulington of Leroy, 6-0. Womack won by fall over Evan Jacobsen of Orion, and beat Logan Knisley of Monticello, 4-3. Stone Engle of Mercer County beat Womack, 6-3. In the fifth-place match, Bulington topped Womack by major decision, 10-0.
At 126, Ryne Lipsey finished seventh.
Lipsey earned a major decision over Cael Sanders of Sterling, 13-4. Dalton Brito of Roxana defeated Lipsey, 5-1. Lipsey then beat Dylan Vaughn of PORTA, 10-9. Dalton Jensen of Leroy earned an 11-7 decision over Lipsey. Lipsey defeated Monmouth's Chuck Jacobsen, 6-2.
Luke Tessman was unable to place at 132.
Gage Adams of Gibson City defeated Tessman, 5-4. Tessman earned a 5-4 decision over Payton Presler of Manteno. Tessman beat Myles Mendoza of Plano, 3-0. Princeton's Austin Wetsel defeated Tessman, 8-0.
Vandalia did not have an entry at 138.
At 145, Adam Palmer was unable to place.
Braysen Singleton of Rockridge defeated Palmer, 8-4. Justin Martinez of Byron edged Palmer, 2-1.
Blankenship was the runner-up at 152. The VCHS senior pinned Mark Siegers of Palos Heights and then won by fall over Brenton Noble of Pittsfield.
Blankenship defeated Keyshawn Girkin of Gibson City, 11-4, in the semifinals. In the championship match, Dakota's Greg Krulas defeated Blankenship, 7-1.
Kolten Kaiser competed at 160. Shane Emry of Dixon beat Kaiser, 10-5. Brandon Elsbury of Byron then won by fall over Kaiser.
Vandalia did not have a wrestler at 170.
Despite a recent ankle injury, Stewart took first place at 182.
"I went out and just scrapped," Stewart said. "Nobody could really take me down. I just pounded kids on top and got some turns. I made some things happen. It was a good day for me, and a good day for the team."
Stewart earned a major decision over Matt Mammosser of Rock Falls, 14-2. Stewart then edged Peyton Hudspeth of Auburn, 1-0. In the semifinals, Stewart defeated Alex Wheat of Clinton, 4-2. In the title bout, Stewart earned a 8-2 decision over Riley Kauzlaric of Coal City.
Bradley took second at 195.
Bradley earned a 3-2 win over Maverick McPeek of Dakota. He then pinned Wyatt Spaulding of Olympia.
In the semifinals, Bradley defeated Kyal Davis of Wilmington, 7-2. In the bracket's title match, Logan Millizer of Monmouth earned a 1-0 victory over Bradley.
Kendrick Woolsey finished seventh at 220. Woolsey pinned Collin Schmidt of Rockridge. Woolsey then earned a 4-1 decision over Brett Nyswonger of Roxana. Jake Frost of Coal City beat Woolsey, 2-0.  Woolsey pinned Jackson Branum of Reed Custer in 54 seconds. Chase Nelson of Mercer County beat Woolsey, 6-2. For seventh, Woolsey beat Nyswonger by tech fall, 17-0.
The Vandals didn't have an entry at 285.
Vandalia will be at home on Saturday. The action begins at 10 a.m. 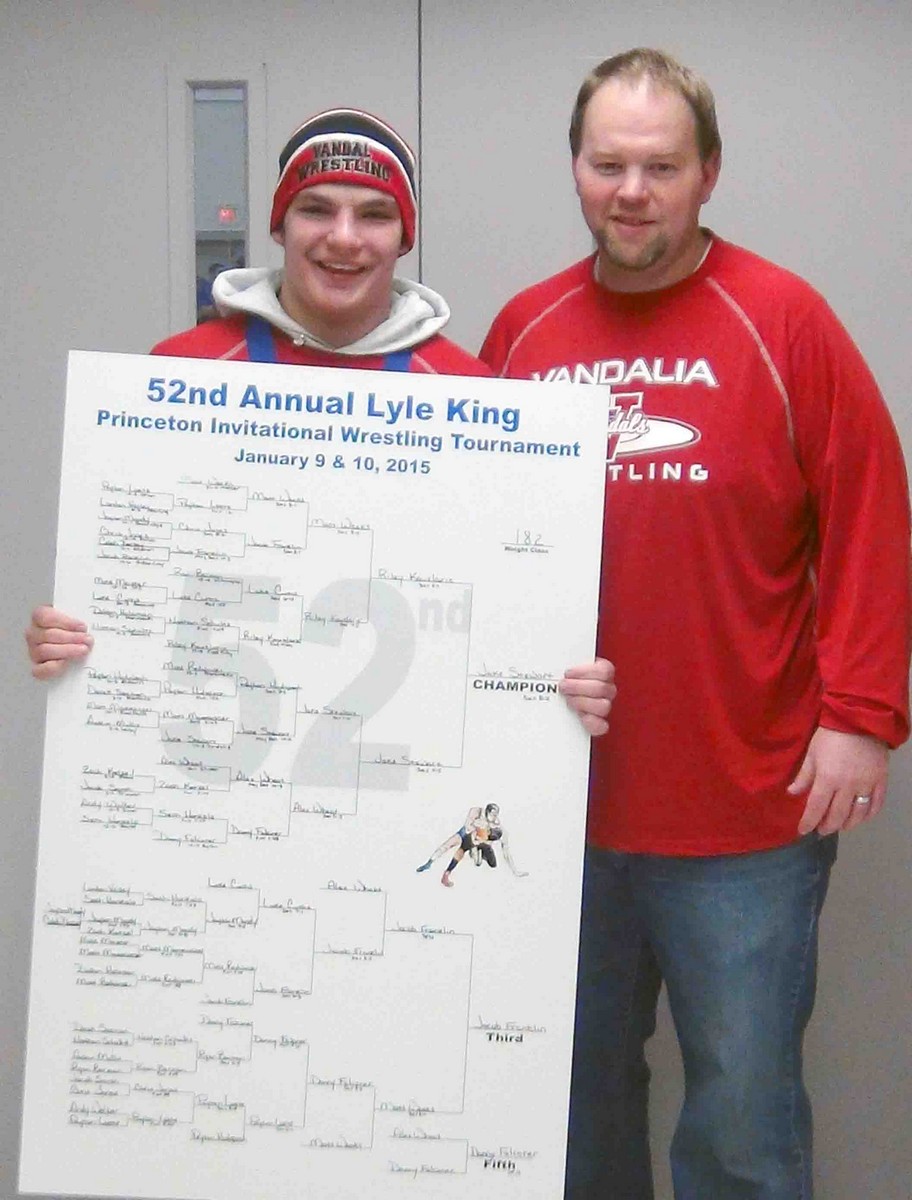 The Vandals pose after finishing fourth at Princeton.