Greenville made history last Tuesday night.
For the first time in the long history of the Vandalia Holiday Tournament, Greenville took home the tourney championship.
Using a balanced attack, the Comets won the 43rd annual tournament by topping Flora, 46-32, in the title game.
The Comets entered the event as the No. 1 seed, and they lived up to the billing, securing a place in the tourney's record book.
And with a large crowd looking on, the Comets were the team left celebrating when the four-day event came to a conclusion on Tuesday night.
"This is a testament to our kids," Greenville Coach Todd Cantrill said. "I'm just so happy for them, and I'm really proud of them. They've put in a lot of work since the summer and the preseason. Our kids have worked their tails off."
The Comets don't rely on one standout, as five players regularly score in double figures.
That balance paid off in the championship game, as five players scored at least six points in the low-scoring affair.
"That's the best thing for us," Cantrill said. "We've had five guys score at least 17 points in a game this season. When you've got that kind of balance, hopefully you'll score some points."
Flora Coach Phil Leib gave the Comets credit.
"Greenville's very good," Leib said.

"You can't focus on just one guy. They've got many scorers. That hurt us."
Looking for the title after falling in last year's championship game to St. Anthony, the No. 3 seeded Wolves stayed close early by sitting back in a 3-2 zone.
Greenville had a 9-8 lead when they scored four straight to pull away. But Flora remained close, cutting Greenville's lead to 15-12.
But Greenville got three-pointers from Austin Lawrence and Will Schaufelberger for a 21-14 advantage.
Flora lost an opportunity to go into halftime down only five, but the Comets scored four quick points just before intermission on hoops from Tim Chilovich and a steal and layup from Schaufelberger just before the buzzer, making it 25-16 at the break.
Flora cut Greenville's lead down to one at 27-26 after a three-pointer from tourney Most Valuable Player Bryce Pearce. But Greenville responded with six straight points, getting an old-fashioned three-point play from Craig Faulkner and a key three-pointer from David Holden. Those points pushed Greenville's lead to 33-26 entering the fourth quarter.
Lawrence provided five key points during a fourth quarter run that extended Greenville's lead to 42-29 with only 3:45 left. By then, the outcome looked clear.
Flora struggled offensively in the final frame, scoring just six points in the fourth quarter.
"We just couldn't get going offensively," Leib said. "We never got into a flow. We played hard, but Greenville's just a good team."
Leib added that Greenville had success against his team's man-to-man defense in the second half, as well.
"I thought our zone did very well in the first half," Leib said. "But I knew if we stayed with it in the second half, they'd just sit out there and take time off the clock with the lead. So, we went to man, and we were kind of out-matched."
Cantrill said his team didn't play its best, but did enough to get the win.
"I've got a lot of respect for Flora's coach and their program," Cantrill said. "Both teams knew what the other was going to do. We battled through it. We kept defending, and kept ourselves in the game. That was the key. We finally made some plays, and it turned it out well for us."
Lawrence and Holden scored 11 points apiece for Greenville, which improved to 13-1 on the season. Faulkner scored nine, Schaufelberger had seven and Jacob Hall added six points.
Greenville made 56 percent of its two-pointers (14 of 25), but just 36 percent of its threes (five of 14).
Pearce of Flora was held to nine points. He'd averaged 24 points per game in the tourney before the championship game. Logan Smith added eight points for the Wolves (8-7).
The Wolves shot 35 percent (six of 17) on two-pointers and hit just four of 15 three-point attempts (27 percent).
Notes: Greenville's Schaufelberger, Hall and Faulkner, and Flora's Pearce and Smith were listed on the all-tournament team. Before this year, the best Greenville had ever finished at the VHT was third, in 2007. The Comets were fourth in 2008 and '11 and fifth last year.
Flora reached the tittle game for the fifth time in six years. The Wolves won the tourney in '11 and '09, and were also the runner-up in '13 and '10.
Pearce scored more than 100 points in the tournament for the second-straight year. The 5-10 senior guard scored 118 points at this year's VHT after scoring 119 last year. Last year's total was the sixth-best all-time at the VHT. 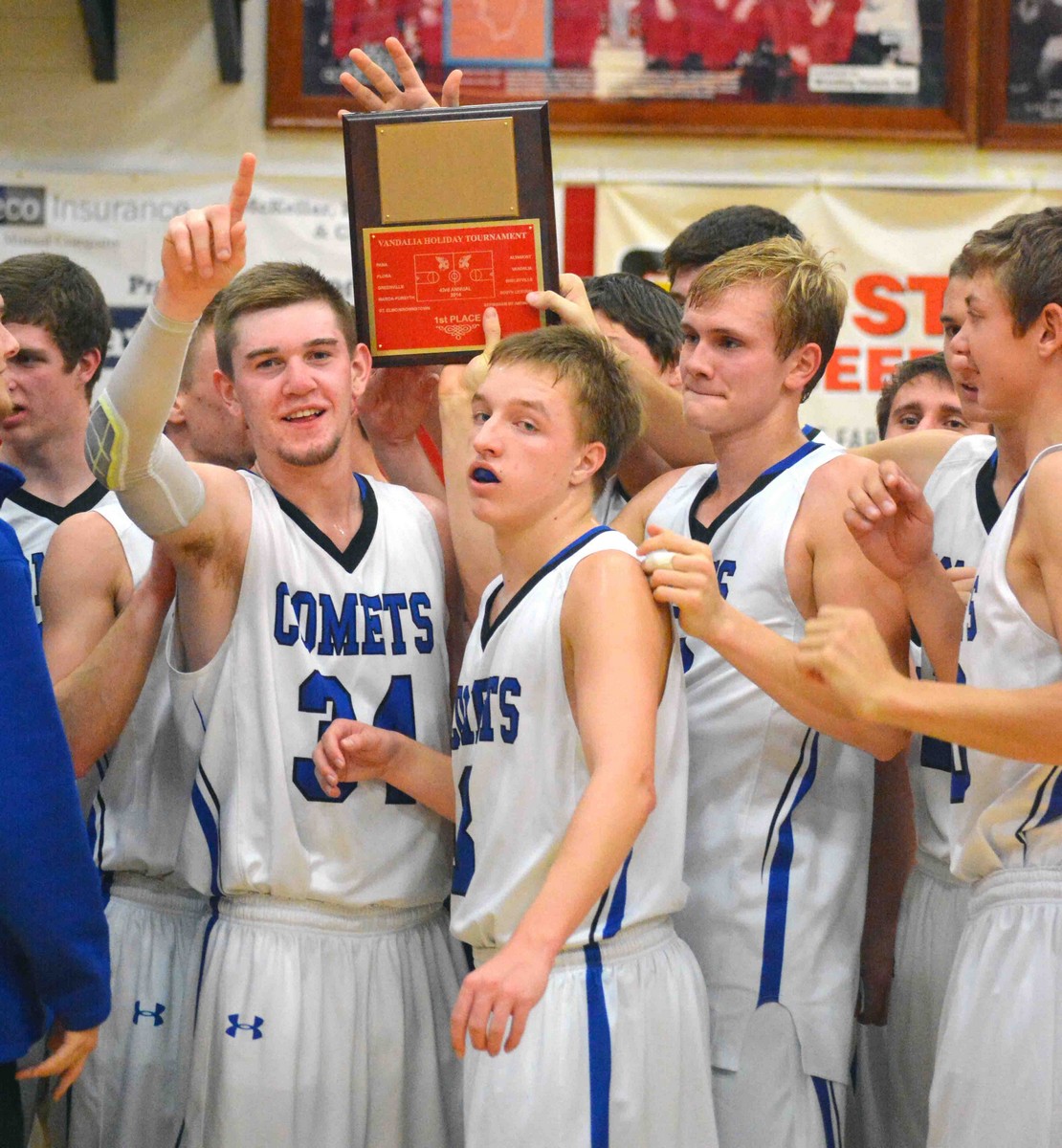 Greenville players celebrate with the championship plaque after winning the 2014 Vandalia Holiday Tournament.