He was addressed as “French John” or “Captain,” and although you will not find John Poussardin’s name recorded in local lore, he is as much a part of Vandalia history as more well-known men.

Were it not for his early death in a strange land, Poussardin would have followed the nameless thousands of others long since dead and forgotten.
Because he had no family here, all papers in his possession at the time of his untimely death on May 26, 1845, were placed in safekeeping. It is through these papers we gain an insight into another aspect of early life of Vandalia settlers.
Thirty-two-year-old Jean Nicholas Poussardin, a native of Aigerald, Meurthe, France, obtained his passport in Nancy, in April 1832, bound for New Orleans, La. Departing from the port of LaHavre, France, a major European port at that time, his journey lasted six weeks.
Almost immediately upon stepping on our shores, he secured deck passage on the steamship “North America,” setting sail for St. Louis.
In his native France, Poussardin had attained the rank of captain in the Garde Nationale, and it seems proper that within six months of his arrival in America, he enlisted as a private in Capt. Mathew Duncan’s Company of U.S. Rangers.
The Sac-Fox War, also known as the Black Hawk War, for the tribe’s war chief, Black Hawk, was going hot and heavy in Northwestern Illinois in 1832, and various detachments of volunteer solders were hired with the pledge of bounty land for a 10-day enlistment.
Poussardin served for one year and was honorably discharged from the Army at St. Louis in September 1833.
Vandalia was an exciting place to be in the 1830s. The seat of Illinois government was here, the economy was booming and there were jobs.
Poussardin was multi-lingual, speaking French, German and English, and probably felt right at home in Vandalia, where the various influences mingled.
This may have been the draw for Poussardin, who in May 1835 purchased a house in Vandalia from Heinrich Blattner, a sure indication he liked the town and intended to stay.
The other could have been his acquaintance with Mathew Duncan, under whom he served in the late war. Mathew lived with his family in Vandalia, where in 1838 he is known to have operated a tavern on the southwest corner of Fourth and Gallatin streets.
We do not know in what manner the Frenchman was employed from 1835-38, when Captain William Linn (Mathew Duncan’s brother-in-law) hired him as foreman on an expedition to clear trees from the Kaskaskia River in an attempt to make it navigable.
Captain Linn, along with Dr. A. Affleck, headed up the expedition and hired Captain James Hill to command the hands on the river’s western banks, with Poussardin given charge of the east bank.
Along with the store goods, Capt. Linn entrusted Poussardin with the camp books and money. A two-page list of “Rules and Regulations” set the tone for the workers, who were paid in 26-day intervals at $1 per day.
The men were to work from sunup to sundown and admonished to keep their axes sharp. They were to not hinder others or be the teller of long stories. No person was to interfere with the cook or his arrangements. After 8 o’clock at night, there was to be no loud noise or unpleasant behavior, “as it is presumed that more or less persons who labour all the day wish to go to rest by that time.”
Should a tree fall into the river channel, it was to be cut up and removed by the crew. Anyone refusing would be dismissed immediately, and the cost of doing the job deducted from his pay.
All logs or timber in the river were to be cut into 6- and 10-feet lengths, and all other timber was to be perfectly deadened.
Due to the efforts of clearing crews such as those hired by Capt. Linn, Vandalia businessman Ebenezer Capps sent flatboats downriver to New Orleans on at least two occasions. 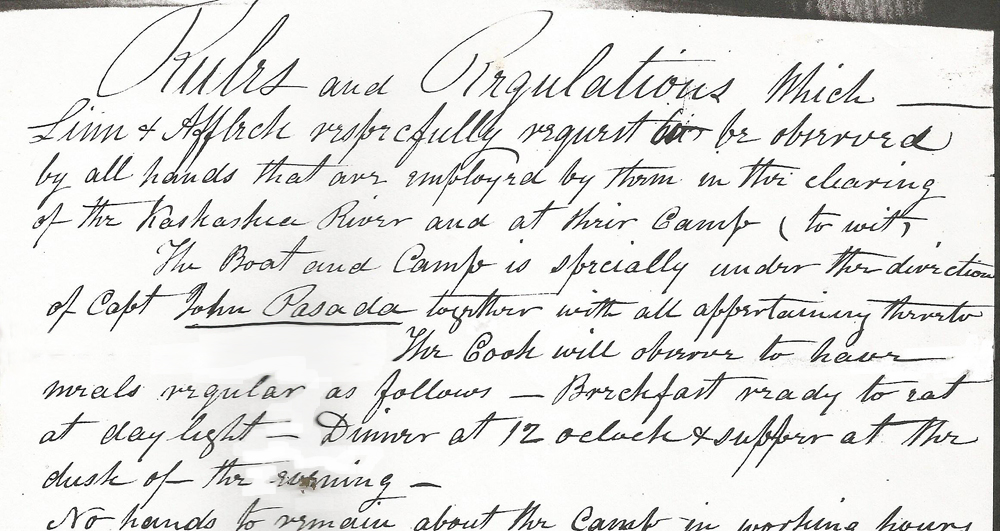