VANDALIA — The odds were stacked against the Vandalia Vandals before Tuesday's season-opening wrestling dual even began.
For starters, two returning state-qualifiers were unavailable to compete for the Vandals. That meant some athletes would be wrestling in higher weight classes against bigger opponents.
Two open weights also hurt the hosts, as well, as the Vandals gave up 12 points to forfeits.
That's not all. The Class 1A Vandals were also hosting a solid Class 3A program.
With all of those factors playing a role, Vandalia dropped the season-opener to Belleville West, falling 54-18.
“Everybody’s not down to their right weight yet,” Vandalia Coach Jason Clay said. “It hurts having a couple weight classes empty, too. And we didn’t wrestle two of our state qualifiers. Trevor Philpot is still trying to certify at 106. And Bobby Bradley is still a little ginger on his ankle. It’s just the first night out. We’ll only go up from here. We’ve got a lot of potential once we fill out our lineup.”
Clay said there is a lot of room for improvement.
“Belleville has some good kids, but I was a little disappointed in some of our performances,” Clay said. “I didn’t think we were  very offensive. We didn’t attack much. When we did attack, we had some good shots and some good takedowns. We’ve got to get more offensive on our feet. And we need to protect our legs a little bit better. You could tell they (Belleville West) had already wrestled a few matches. I think our kids were a little nervous or keyed up to be at home. I think some of the kids gassed out a little bit.”
Belleville West’s Garrett Bass won by forfeit at 106 pounds.
Vic Beloach defeated Vandalia’s Chaston Womack, 6-2, at 113.

Belleville’s Justin Koderhandt pinned Vandalia’s Jarrett Paslay at 120. Next, VCHS senior Ryne Lipsey earned a 12-4 major decision over Kyle Ziegle at 126.
Belleville West's Marvin Wallace earned a 6-4 decision over Luke Tessman at 132.
Vandalia's Logan Sullens won by injury default at 138, as Belleville’s Derek Ohlsen hurt his shoulder. Next, Belleville's Nate Smalling won by fall over Garret Stewart at 145. Nick Foster of BW then won by fall over Adam Palmer at 152.
Vandalia's Dalton Blankenship earned a hard-fought 6-5 decision over J.D Bass at 160 pounds. The bout was tied, 4-4, after two periods. Blankenship scored on a reversal with 50 seconds left to take the lead. Belleville's Bass earned an escape with 10 seconds left, making it 6-5. Blankenship held off Bass’ late shot attempts to secure the win.
“Dalton did what he had to do,” Clay said. “It wasn’t his best match.”
At 170, Belleville’s Claude Shelby won by fall over Kolten Kaiser. Belleville West’s Tyrez Tolden won by forfeit at 182.
Vandalia senior Jake Stewart earned a dominating tech fall victory, 17-0, over Devonta Flaker at 195 pounds.
“Jake had a good result,” Clay said. “I thought he wrestled pretty well.”
Vandalia’s Kolton Etcheson lost by fall to Jeremy Gilkey at 220. At heavyweight, Kendrick Woolsey lost by fall to Rickey Nelson.

Notes: The Vandals go to the Civic Memorial Tournament this weekend. 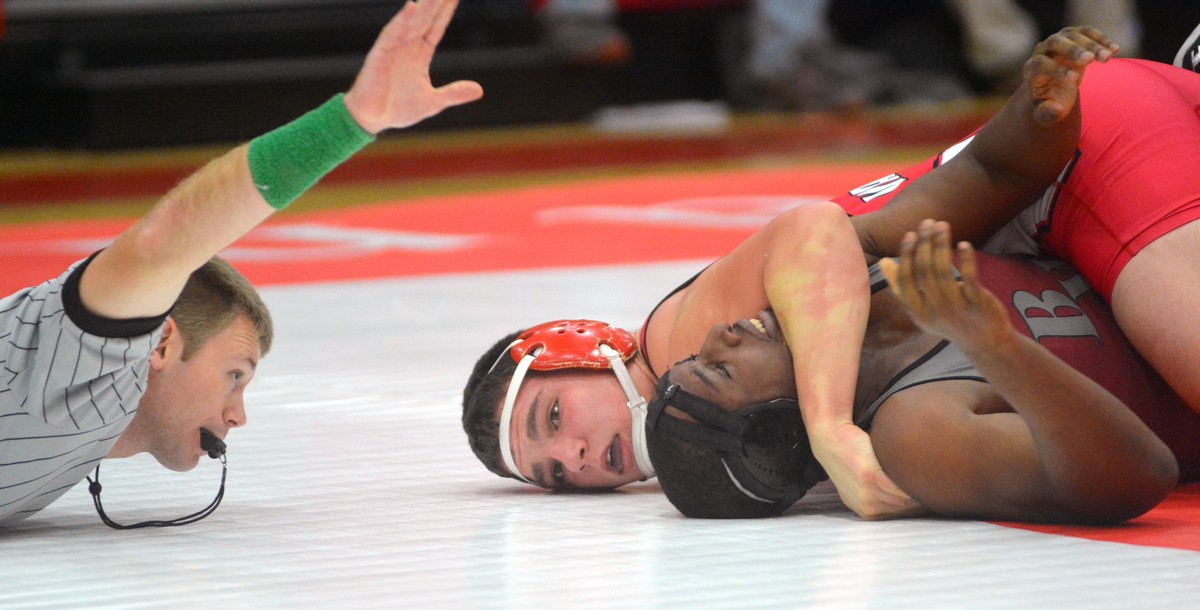 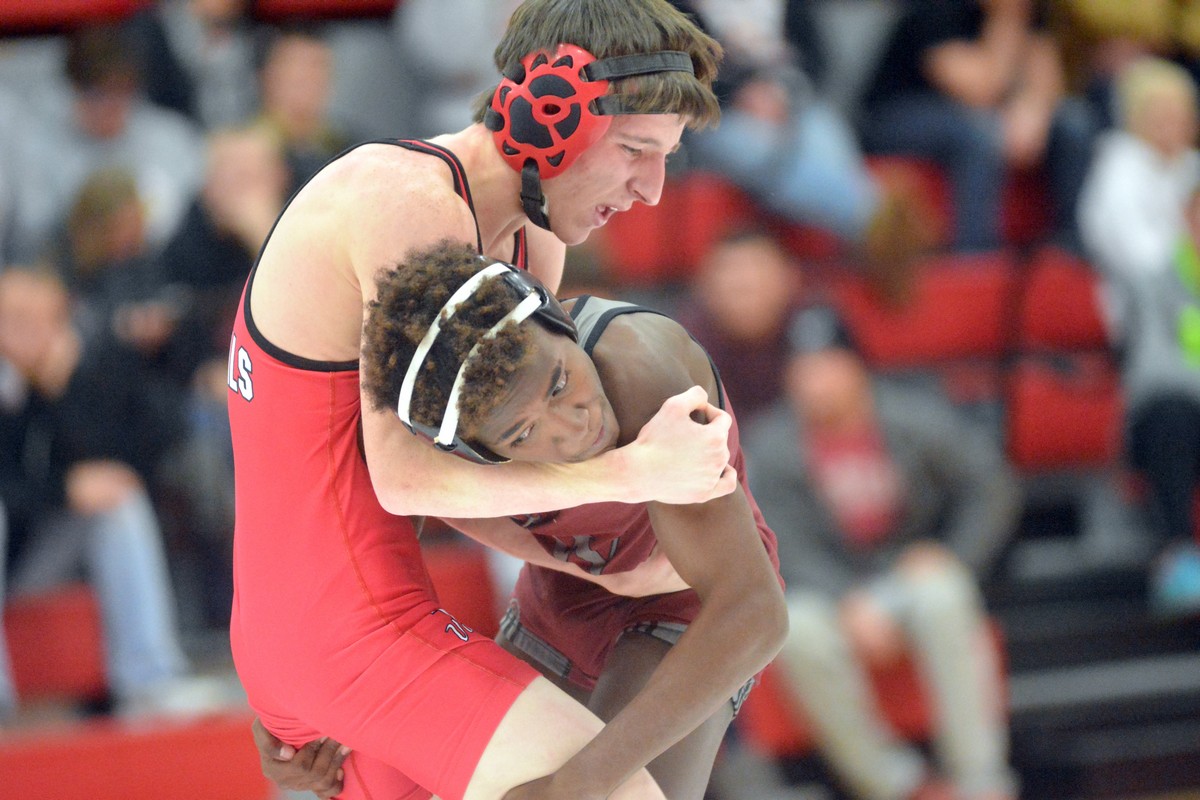 Chaston Womack defends against his opponent.