FARINA — The Vandalia Vandals nearly overcame a 15-point deficit.
But in the end, fired-up South Central made all the plays down the stretch in a 67-61 victory over Vandalia last Tuesday night in the 2014-15 season-opener for both teams.
For the Cougars, it was a great way to start the 2014-15 season.
"This is big for us," South Central Coach Rick Simmons said. "After the season we had last year, it's nice to win the first game like this. And of course, playing Vandalia is big. It's a rivalry and the crowd was really into it. Anytime we can beat Vandalia, it's a good deal."
For the Vandals, it was a disappointing start to the season.  At the same time, the visiting Vandals showed some fight in the second half. Vandalia cut a 15-point deficit down to two at one point, and the Vandals had a chance to tie the game on two occasions.
"There's definitely some positives to take away from this game," Vandalia Coach Brian Buscher said. "In the second half, our effort level was very good. We had our chances. The kids battled. We got it down to a one-possession game. We just needed to hit one of those shots. But that's the thing about these early-season games, you've got to learn from them."
Simmons said he was extremely proud his team was able to withstand Vandalia's valiant comeback attempt.
Simply put, in crunch time, South Central got it done.
"Every team is going to make a run," Simmons said. "And when you see it coming, you just have to be able to fight and overcome it. Fortunately for us, we were able to do that tonight."
Throughout the game, the Cougars were able to scoreinside again and again at point-blank range, either on layups against Vandalia's trapping press, or on putbacks inside on offensive rebounds.
"We were able to get the ball inside and we finished," Simmons said. "That was the plan."

Game stats
Senior guard Collin Nestleroad scored 18 points to lead the Vandals. Drake Dokey added 13 points and Austin Durbin also reached double figures with 12. Richie Well scored eight points, Nathan Casey and Robby Lott chipped in four points apiece, and Kelly Jones rounded out the scoring with two points.
The Vandals made 18 of 28 free throws.
South Central used a balanced attack, as eight players got into the scoring column.
"I've told the guys we can't do it with just five guys," Simmons said. "We're going to need as many as we can get to contribute. We used nine guys tonight. We may go to 10 at some point."
Evan Langley led the Cougars with 15 points, while Brett Harmeier and Noah Powless contributed 10 points apiece. Dre Hill scored nine, while Jace Wilkins and Chase Riley added eight points apiece for South Central.
The Cougars made just 12 of 29 free throws, but still held on and won.

Game recap
With a big crowd looking on, the Cougars came out fired up.
And after a back and forth start, Vandalia led, 11-10.
But the Cougars got four-straight points from Harmeier to take the lead.
By the time the fast-paced first quarter came to an end, South Central held a 15-12 advantage.
Early in the second period, the Cougars pushed the pace and extended their lead. South Central used a 10-4 run to take a 25-16 lead.
Again and again, the Cougars got layups by beating Vandalia's press, or they simply worked the ball inside.
Vandalia's Dokey scored five-straight points for his squad, including a three-pointer.
But South Central's Powless and Riley took turns scoring in the paint.
The Cougars used a 12-5 run to end the first half, and the hosts led, 40-25, at intermission.
Buscher admitted he was not pleased with his team's performance in the second period. South Central scored 25 points during the frame.
"The last four minutes of the first half were not very good for us," Buscher said. "We let them get on a roll. That wasn't the way to play basketball."
Whatever Buscher said at halftime, it was must have worked.
Vandalia outscored South Central, 16-7, in the third period to get back into the game.
At one point, the Vandals scored seven-straight points, with Nestleroad, Well and Dokey handling the scoring.
Durbin and Lott scored late in the third quarter, and Vandalia had cut South Central's lead down to 47-41 entering the final frame.
The Cougars scored the first four points of the fourth quarter, as Hill and Langley scored in the lane. Vandalia turned the ball over on back-to-back possessions, as well.
Still, the Vandals kept coming, forcing South Central into some turnovers.
Nestleroad scored on a back-door cut, and then converted a steal into a layup, cutting South Central's lead to 56-52 with just under four minutes to play.
The two teams then traded hoops and free throws.
Next, Vandalia freshman Casey hit a big three-pointer from the top of the key, and South Central's lead was only 60-58.
But the Vandals couldn't get enough defensive stops, as South Central's Langley and Wilkins both scored inside for the Cougars.
Lott grabbed a steal and made a layup that cut South Central's lead to 64-61 with one minute to play. On the next possession, South Central turned the ball over on an offensive foul. Vandalia's Well then got an open look, but missed on a three-point attempt.
Going the other way, Dylen Peters scored for the Cougars, all but sealing the win.
A late free throw from Wilkins accounted for the final score. 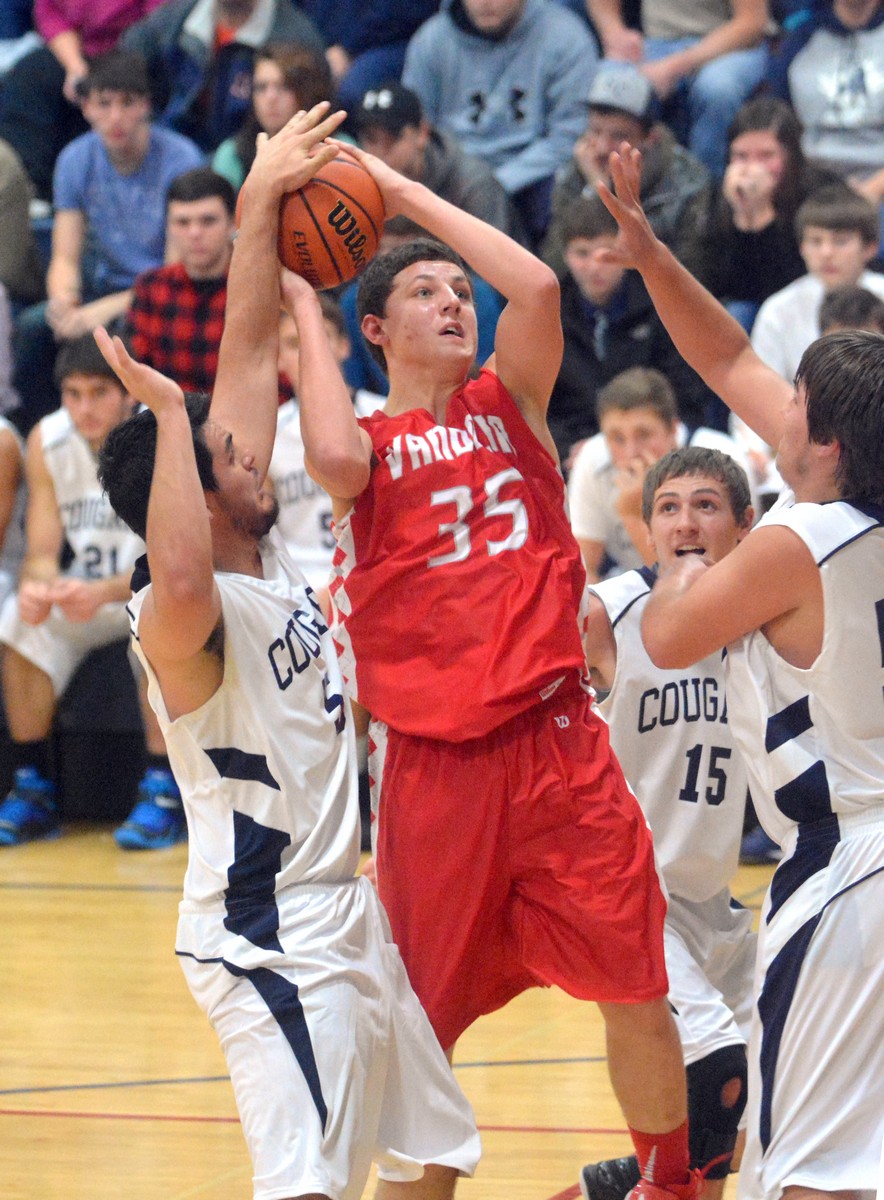 Drake Dokey draws a foul inside against South Central. 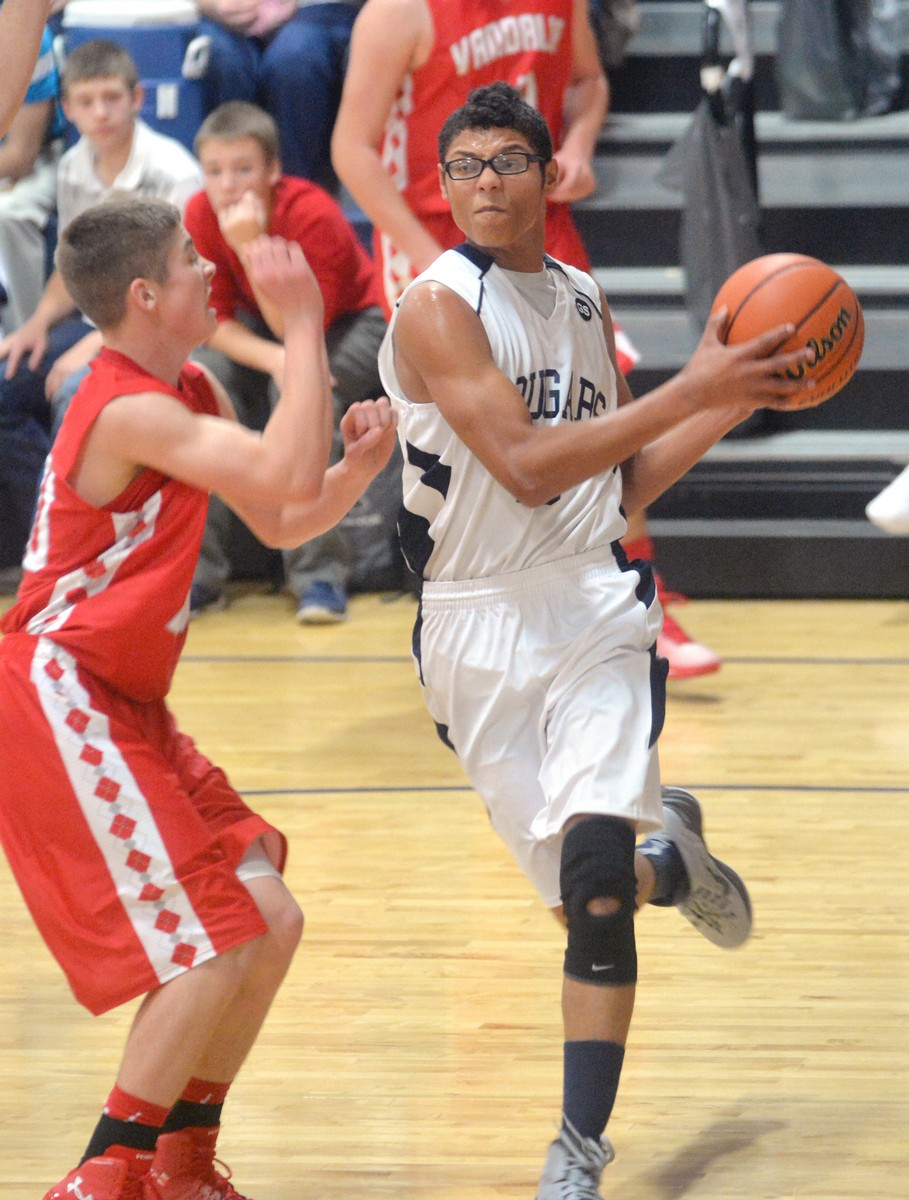 Dre Hill drives to the basket. 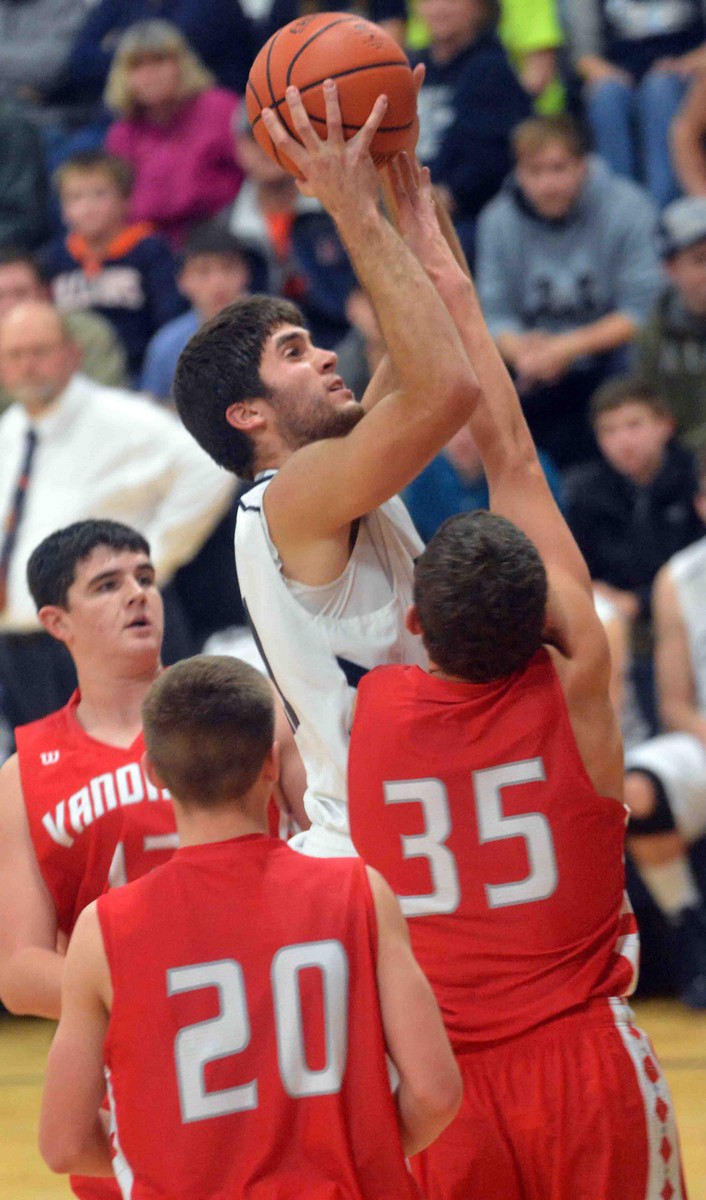 Evan Langley scores in the lane.