Tony Alstat was hooked from the start.
From the first time he competed in the grueling endurance event, he knew it was just his thing.
What others see as extreme or nearly impossible, Alstat sees as exhilarating, enjoyable and rewarding.
A Vandalia native, Alstat has a strong passion for competing in arguably the toughest single athletic event around — the Spartan Race.
Pushing his body to the limits, coming out in one piece and the personal satisfaction that comes with finishing a grueling event is why he does it.
“I like to challenge myself,” Alstat said. “When you finish, it’s an awesome feeling. It’s a personal challenge. How far can you push your body? And how mentally strong can you be?”

The Spartan Race
A true test of will.
That’s how the Spartan Race has been described.
The Spartan Race is a series of races of varying distances that feature obstacles that athletes must conquer on their way to the finish line.
There are several different races in the series. The Spartan Sprint features more than three miles of obstacle racing, while the Spartan Super features distances more than eight miles. The Spartan Beast is at least 12 miles long.
What makes the races unique are the obstacles the runners face. Obstacles can vary by event, but could include things like crawling under barbed wire in the mud, climbing over walls, throwing a spear into a target, carrying heavy objects (sandbag, rock, tire), climbing up a rope, getting over a slippery wall, avoiding “gladiators” and navigating a log-jump area.
“The guy who created these is Joe De Sena, and his whole thing is the unexpected,” Alstat said. “You never see a course map before the race and you never know what obstacles are going to be there. And the terrain is usually tough, with a lot of hills. Between the terrain and the weather, those are the biggest surprises.”
Last year, more than 500,000 people competed in more than 100 Spartan Races in 17 countries.
Alstat said some of the obstacles are difficult.
“You have to throw a spear into hay bails and you only get one shot,” Alstat said. “If you don’t complete an obstacle, you have to do 30 burpees. A lot of people call the spear throw a burpee station. And traversing walls is challenging because so many people are going over them, there’s mud all over them and it’s easy to slip off.”
Athletes can earn a trifecta medal after completing a Spartan Sprint, a Spartan Super and a Spartan Beast in one calendar year. Alstat earned a trifecta medal in 2013. This year, he earned a double trifecta, completing six events in a year. He said it was a proud moment when he earned an impressive medal for the accomplishment.
“This year my goal was to do a double trifecta and I did it,” he said.

Getting started
Alstat graduated from VCHS in 1990, where he played baseball, football and basketball. Alstat works at Vandalia Correctional Center and coaches youth football.
Always one to stay in shape, Alstat began a CrossFit workout program, and after running a few 5Ks, he got involved in an event called the Warrior Dash. He also competed in a Tough Mudder event.
“Then I heard about Spartan Races and it blossomed from there,” Alstat explained.
Alstat first competed in a Spartan Race in 2012 in Indiana. There was something a bit different, even more special about the Spartan Races, he admitted.
That’s what keeps him coming back for more and more. Simply put, he was hooked after giving one a try. It takes a lot of endurance, strength and willpower to finish a race. You have to be in good shape or you probably have no chance to finish.
“Mentally, you just tell yourself to keep going, one foot after the other,” Alstat said. “I just try to stay focused on what I’m doing and just keep going. You’ve got to be mentally strong.”

Success
Alstat isn’t only competing, he’s having success at the events, too. He earned his trifecta medal in 2013 and now has pulled off the double trifecta in 2014.
And at a recent event in Ohio, Alstat competed in three grueling Spartan Races in one day — 31 miles in all. There were 375 people signed up for the event and only 166 finished. And Alstat was 57th overall out of those 166.
“That was pretty satisfying,” he said. “I was thinking that I came here to accomplish this, so let’s just get it done.”
Alstat has traveled all over the country to compete in the Spartan Races, as he simply cannot get enough of them. He added it’s nice to meet a lot of people with similar interests. Alstat said his girlfriend, Michelle Otto, has been competing in some events, as well.

Why do it?
Call it a desire to compete — against others and against himself.
“It tests your limits and shows you what you can and can’t do,” Alstat said.
One benefit of participating in a Spartan Race is simply the fact that Alstat must stay in good shape if he knows he has an event coming up.
“Signing up for the Spartan kept me accountable,” he said. “I could have easily slacked off on my gym time and eating regimen without signing up for the runs. But knowing I was committed to a Spartan kept me focused and dedicated to my training.”
Of course, the Spartan Race is not for everyone.
“Some people think you’re crazy,” Alstat said. “I tell them to sign up for one and try it. They’re addictive. I think most people who do one will want to do another one. For me, it’s a hobby.”
So how much longer will he be competing?
“I don’t know,” Alstat said. “I’m 42 years old now. I’m not sure how much longer my knees can take it.”
Alstat said he might be competing at Spartan events in St. Louis, Chicago and Peoria in 2015.
For now, Alstat will keep pushing his body to the limits. He’ll give it his all, come out in one piece and know he accomplished something meaningful.
What others see as extreme or nearly impossible, Alstat sees as exhilarating, enjoyable and rewarding.
He was hooked from the start.
And he doesn’t plan on stopping any time soon. 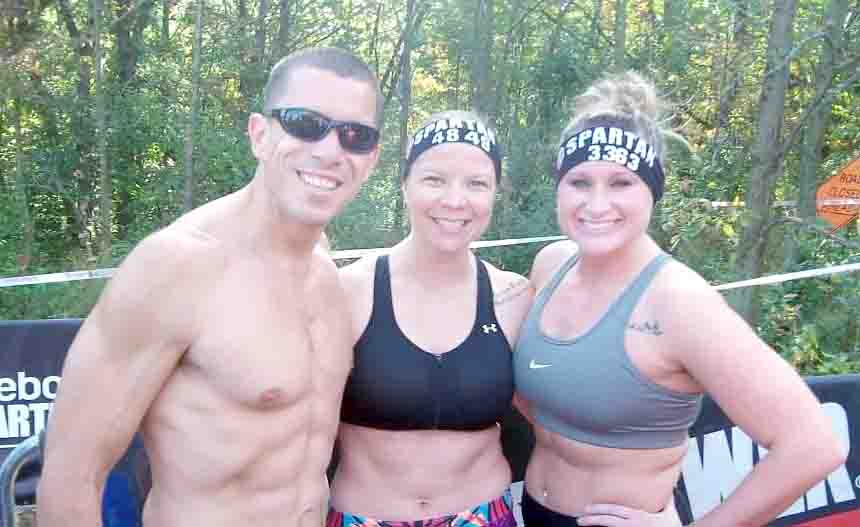 Tony Alstat poses with Ashley Knebel and Michelle Otto before a Spartan Race in Chicago on Sept. 28. Alstat has been competing in Spartan Races since 2012.