MULBERRY GROVE — As the final whistle blew, contrasting emotions were on full display, just as you'd expect after a postseason thriller.
Moments after an intense regional championship match concluded, the Patoka Lady Warriors were jumping up and down and screaming in celebration, as their volleyball season would continue in the state tournament.
On the other hand, the Mulberry Grove Lady Aces were wiping away the tears as they realized their season had come to an abrupt end.
Number-three seed Patoka beat No. 4 seed Mulberry Grove, 25-18, 25-17, on Thursday in the championship game of the Class 1A Mulberry Grove Regional.

The district championship propelled Patoka into Tuesday's Louisville North Clay Sectional, where they played against Woodlawn.
"This is absolutely amazing," Patoka Coach Paula Copple said. "We started out well in our season, then we had a low point, but our girls picked it back up. We're playing our best at the right time. I'm very proud of these girls. They did a great job tonight."
Copple said it was Patoka's first regional title in volleyball since 2009.
Patoka senior outside/middle hitter Lindsey Cain said she and her teammates have been waiting for a moment like Thursday night throughout their entire volleyball careers.
"Tonight's a memory I'll never forget," Cain said. "A lot of us have been together since sixth or seventh grade. We're all best friends. And our goal since junior high was to come into high school and win."
"I think our starting six have been playing together since seventh grade," Copple added. "They work well together."
Tourney host Mulberry Grove had early leads in both sets before Patoka rallied to victory.
"They went out there and fought for it," Copple said. "They picked it up. It was a total team effort. It takes the whole team."
Mulberry Grove Coach Jim Quick said his team had its chances, but just couldn't get it done.
"It was a good game, I thought both teams played well," Quick said. "It could have gone either way."
Quick added it was a great atmosphere for both teams to play in.
"It was amazing how many fans were here and how loud it was, too," he said. "You couldn't hear anything."
And if there's any consolation for the Lady Aces, it's the fact that they reached the regional title game as a No. 4 seed and upset the No. 1 seed in the semifinals.
Quick noted his team was playing its best volleyball at the end of the season.
"Our season really took off this week," Quick said. "We came into our own this week at the regional tournament. We beat No. 1 seed Lebanon after losing the first set. We came back and won the next two sets to advance."
But Thursday's season-ending loss was tough to take for the Aces, as many of the players struggled to hold back the tears.
"It's tough right now," Quick said. "We've got a good group of girls."
Next
Patoka was scheduled to play at the Louisville North Clay Sectional on Tuesday night. See related story in this section.
"We'll see what happens," Copple said of Tuesday's game. "If they come out strong and play like they did tonight, they can go a long way."
Cain added the hostile environment at Mulberry Grove also made for a memorable night. Playing in that kind of atmosphere should help Tuesday, she added.
"It was nerve-racking and kind of scary at first," Cain said. "We just played our best. We'll see what happens Tuesday. We'll just go with it and try to have fun. We've never done this before. It's our last year together and we're still playing. Whether we win or lose, we're going to play hard."
Starters
Patoka used a starting rotation of Elizabeth Hettich, Morgan O'Brien, Cain, Amber and Ashley Gramlick, and Taylor Isaak. The starting libero is Abbey Donoho.
Mulberry Grove started Caity Blankenship, Haley Hinch, Kayla Zimmerman, Lyriq Bernard, Kassidy Jolliff and Sydney Harnetiaux, with Karissa Woody as the libero.
Match Recap
Mulberry Grove led 4-0 in the first set after two aces from Hinch. But Patoka rallied back and the set was tied, 5-5.
The Lady Warriors got kills from O'Brien and Isaak to take the lead. Mulberry Grove struggled with their serve-receive and also had several passing errors as the Warriors pulled away.
Kills from Ashley Gramlick and O'Brien pushed Patoka's lead to 15-9.
Mulberry Grove then responded by scoring three-straight points. Patoka regained all of the momentum late in the first set and scored five of the next seven points. An ace by Cain gave Patoka a 20-14 lead.
The Lady Warriors then scored five of the next nine points to get the win, 25-18. Amber Gramlick had a late ace and Cain had a late kill to finish off the set.
In the second set, Mulberry Grove jumped out to a 7-3 lead with some stellar serving from Harnetiaux and Woody. At that point, it looked like the match may go to three sets.
But Patoka regrouped and inched closer and closer. After an ace by O'Brien and a kill from Cain, the Warriors had tied the set up, 11-11.
From that point, the Lady Warriors kept the momentum and pulled away, taking an 18-12 lead. During the run, Cain served three aces and Isaak slammed a kill.
Mulberry Grove Coach Quick took a time out in an attempt to stop Patoka's momentum. But it didn't work.
The Aces had trouble handling Patoka's serves and then a hitting error by the hosts gave the Warriors a 20-12 lead.
Mulberry Grove didn't go down easily, though, as they scored three-straight points to keep their hopes alive.
Moments later, Isaak of Patoka hit a kill at the net and then Mulberry Grove committed back-to-back errors, making it 24-17. O'Brien's kill finished off the set and the match for the Warriors, who began celebrating the regional title.
The Lady Warriors ended the night by posing for pictures with the regional title plaque.
No individual stats from the match were available at press time.
Semifinals
The two teams advanced to the title match by winning semifinal contests over higher seeds on Tuesday night.
And both teams needed three sets to do it.
In the semifinals, Mulberry Grove upset No. 1 seed Lebanon, 17-25, 25-22, 25-12. Patoka beat second-seeded Lovejoy in three sets, 19-25, 25-15, 25-17. 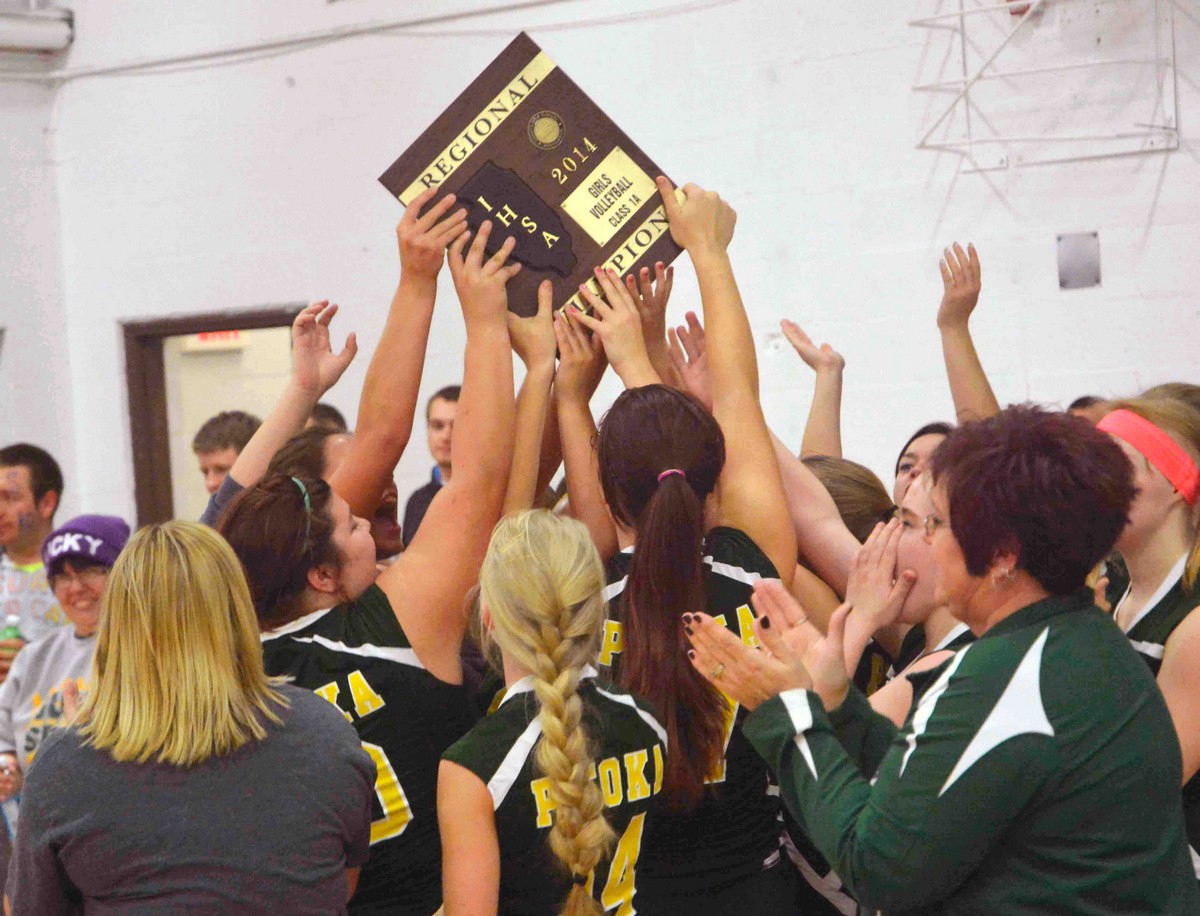