This past Sunday afternoon, as I was heading to my car after attending the Armed Forces Tribute held in Sonnemann and Greer parks, I walked past two ladies in conversation with a veteran.
It was then I heard one of the women say, “Thank you for your service,” and these words have stayed in my head.

The two-day event, sponsored by Wildlands Outdoor Equipment and the WWII Historical Re-enactment Society, in conjunction with Vandalia Tourism Commission, was the second such event held in Vandalia.
Saturday morning began with posting of the colors by  Brownstown VFW Post 9770, with members of the Crawford-Hale Post American Legion Post 95 posting the colors on Sunday.
At least 60 percent of the participants were veterans. Some had seen active duty in Vietnam, Iraq or Afghanistan, with others serving during the interim years.
In the talks I had with the various participants, I found they represented all four branches of the military and held ranks from private to lieutenant colonel.
I stopped to talk to some of the men who had a communications rig and told them I had identified three branches, and was looking for a Navy man.
About that time, two men approached us, and I instantly recognized Layne Mayfield and his son, Marion, who was home on leave from the Navy. Marion had recently returned to his base in Connecticut after serving the last 174 days submerged. He is a navigation crewman on a submarine.
Marion told me his grandfather, Lyle Mayfield, had served in World War II and his grandmother Duckworth with the Waves.  He is continuing the family tradition.
Approaching the living history encampment of the 101st Airborne, “The Screaming Eagles,” I saw the men were readying for a skirmish. The 101st has a special meaning to me, because my oldest brother, Ed, served a tour of duty with the 101st during Vietnam, having previously been with the First Cavalry.
Nearby, a small museum was set up with a wonderful collection of wartime books, magazines, toys and posters to show life on the homefront, where scrap drives were common and ration coupon books were used.
Our guide, re-enacting the part of air raid warden, told that if a scrap drive was held today, it would be our computers and cell phones that would be on the list of needed items, because of the precious metals contained inside.
A military retiree, he had an abundance of wartime history to share. The original air raid siren was a hit with the children, who were invited to turn the handle and make it wail.
On the first day of the event, I sat around the fire with some of the men who are members of my son’s re-enactment group, Co. C, 1st Battalion, 502nd Parachute Infantry Regiment, First Cavalry Airborne Division.
I was wearing a hat that Mat had bought for me honoring the 96th Deadeyes, my dad’s division from World War II. I told the men of getting my father’s one-time re-issue of his medals and of my surprise that a silver star was included.  It was then I heard a story that made my blood boil.
One of the young men, a veteran of Afghanistan, told me that he had earned a Purple Heart. At the awards ceremony, the commander pinned the Purple Heart to his uniform and as he walked back to his seat, it was taken from him, returned to the dais to pin on the chest of the next recipient. To this day, this veteran has not received his Purple Heart from the U.S. Army, although he has a certificate to say he earned it.
He smiled and told me, ‘Sometimes I even forget that I earned a Purple Heart until I look at the scars on my arms.”  He was in a Humvee that hit a roadside bomb. In every way, this is wrong. We, as a nation, can do better.
The 2014 Veteran’s tribute was a success in many ways. These young men, our unsung heroes from Iraq and Afghanistan, join together with men who have been where they have. The same man injured in the Humvee explosion told of his return to the U.S.
They landed in Texas and there were no streamers, no fanfare; however, there was a contingent of Vietnam veterans and their wives who served them coffee and donuts. What touched him the most, he said, more than even hearing ‘Thank you for your service,” was when one of these veterans shook his hand and simply said, “Good job.’
The Armed Forces Tribute is a rare opportunity for us to see the Jeeps, transport carriers and the original WWII Harley-Davidson motorcycle, and understand how communication was carried out. It is also interesting to see the various uniforms.
However, to me, there was a much larger overall meaning to the event.
In a small way, by interacting with men who have been in the heat of battle, who have seen things that we cannot imagine, we honor them. We honor their service.
I’m not a veteran, but my grandfather was; my father was; my brothers, Edmund and Donald, both served multiple tours in Vietnam; and my nephew, Michael, also served in the Army. It is for them that I attend the tribute.
Thank you for your service. 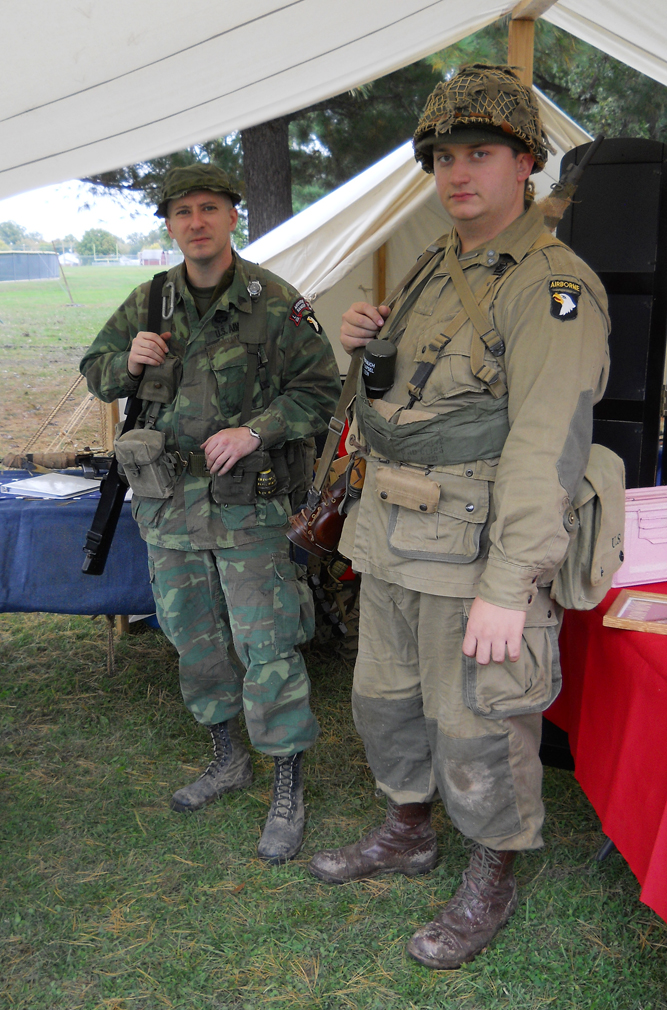