Vandalia fought off a second-game charge last Thursday to sweep the Lady Comets in the annual Volley for the Cure game at Greenville.

After recording a first-game win, 25-21, the Lady Vandals jumped out to 5-0 and 14-7 leads before Greenville began mounting a challenge.
Greenville tied the score at 18, then took their first lead of the game with the next point. The teams took turns knotting the score before coach Allison Hall’s squad scored its final four points to secure a 26-24 win.
Madison Klanke led the Lady Vandals with nine kills, Kadi Metzger and Ally Sasse added five, and Jessica Sullens contributed four.
Sasse had two aces and Sullens one. Metzger had two blocks, and Johanna Walton and Jalea Paslay each had one.

St. Elmo/Brownstown fell to Windsor last Thursday in two games by identical scores of 25-17.
Gabi Moore had six kills, Katie Kroll added three kills, Elissa Baron and Emily Bone each had two and Brandi Howard and Madison Carson each had one.
Baron had one kill.
On Tuesday night, SEB defeated Altamont, 25-19, 25-17.
Bone had 10 kills, Moore had seven, Baron had three, Kroll had two, and Sarah Maxey one.
South Central improved to 31-11 on the season with a 25-16, 25-19 win against Sandoval on Tuesday.
Emily Chapman had nine kills and 11 assists, Maria Brasel had eight kills, 11 assists and 10 points, Katelynn Monical had seven points, and Deidra Schaal had five kills and seven points.

GOLF
In a four-team alternate shot match that did not count toward team records, the Vandalia golfers finished second.
Hillsboro won the match at Litchfield Country Club with a 133 total, Vandalia had a team score of 148, and Litchfield and Staunton tied at 153.
The team of Zach Schaal and Jake Bowen shot a 43, Scott Shulman and Alec Schroeder had a 48, and Nathaniel Weaver and Kain DuFaux teamed up for a 57.

BASEBALL
South Central defeated Webber Township, 8-3, last Tuesday.
Dylen Peters got the win for the Cougars, giving up seven hits while striking out 10 and walking three.
Trent Geiler was 2 for 3 with two runs batted in, Brett Harmeier was 2 for 4, and Noah Powless and Gavin Ratermann each having one hit, with Powless driving in three and Ratermann having one RBI.
Last Wednesday, South Central drubbed Odin, 17-8.
Powless evened his season record at 3-3 by striking out 13 while walking two and allowing eight hits.
Powless and Dylan Smith each contributed a three-run homer, Powless finishing with four RBI’s and Smith three. Harmeier had three doubles and an RBI, and Ratermann and Dre Hill each went 2 for 5, with Ratermann driving in two runs.

Brownstown/St. Elmo fell to Webber Township, 7-3, last Wednesday in a game called after six innings due to darkness.
Landon Feezel suffered the loss, striking out six while walking five and allowing seven runs on three hits.
Feezel, Drake Hall and Lewis Brown each had one hit for BSE, and Klayton Kroll had an RBI. 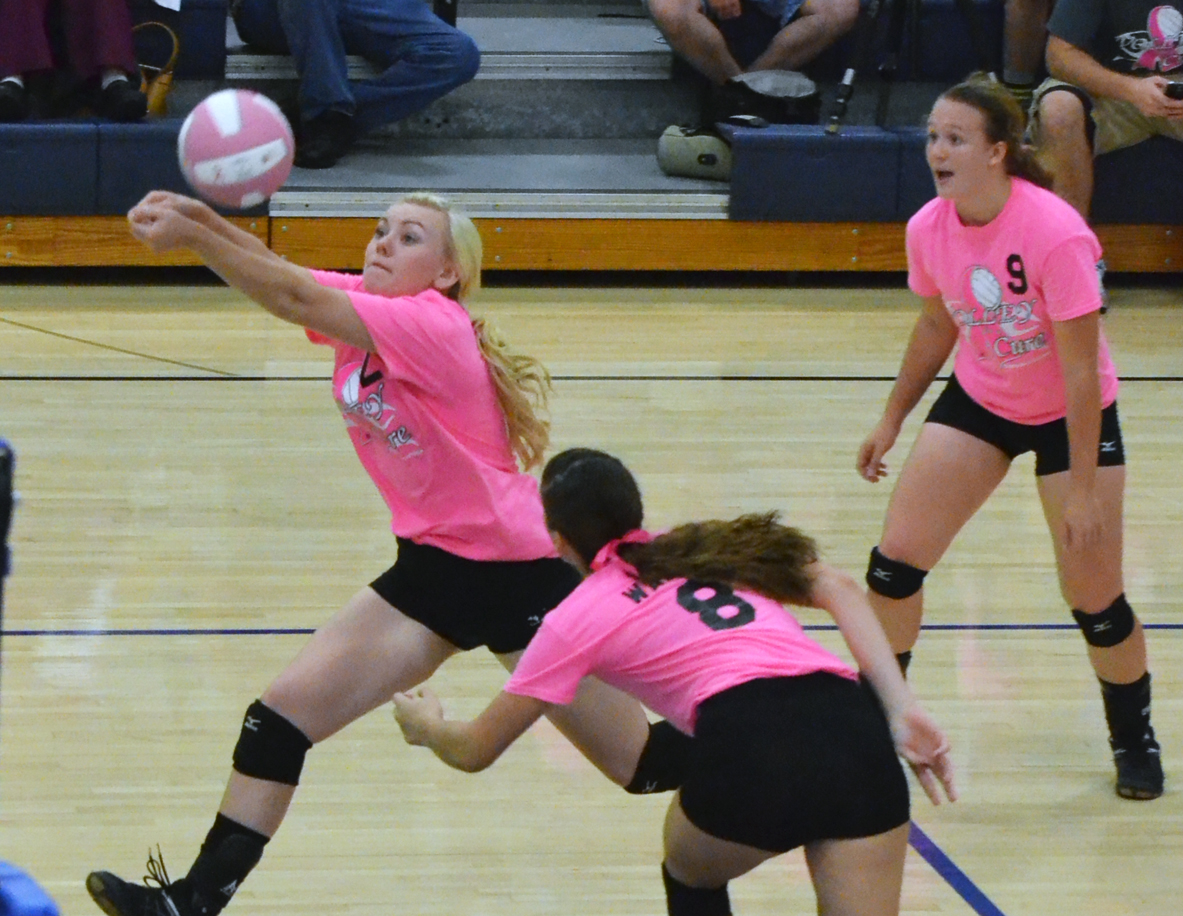 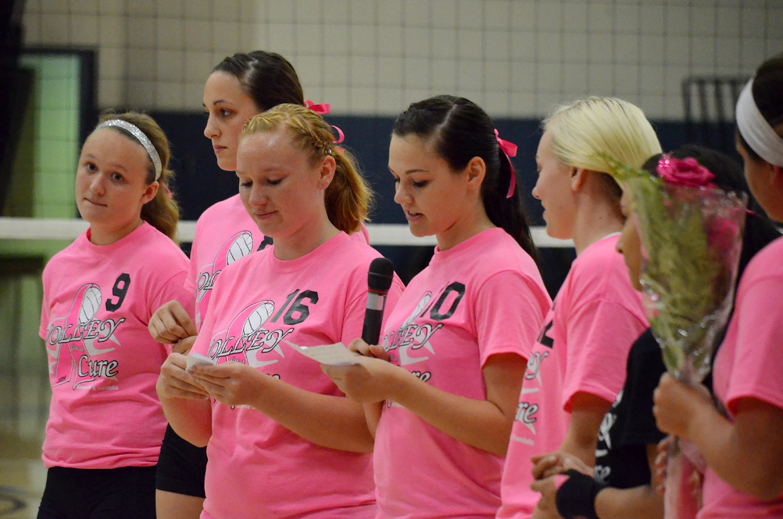 Prior to the Volley For The Cure game last Thursday, the Lady Vandals honored their coach, Allison Hall, for her efforts to fight breast cancer and remembered loved ones that she had lost to cancer. Above, from left, are Mindy Ritchey, Johanna Walton, Hallie Leigh, Madison Click and Kadi Metzger. 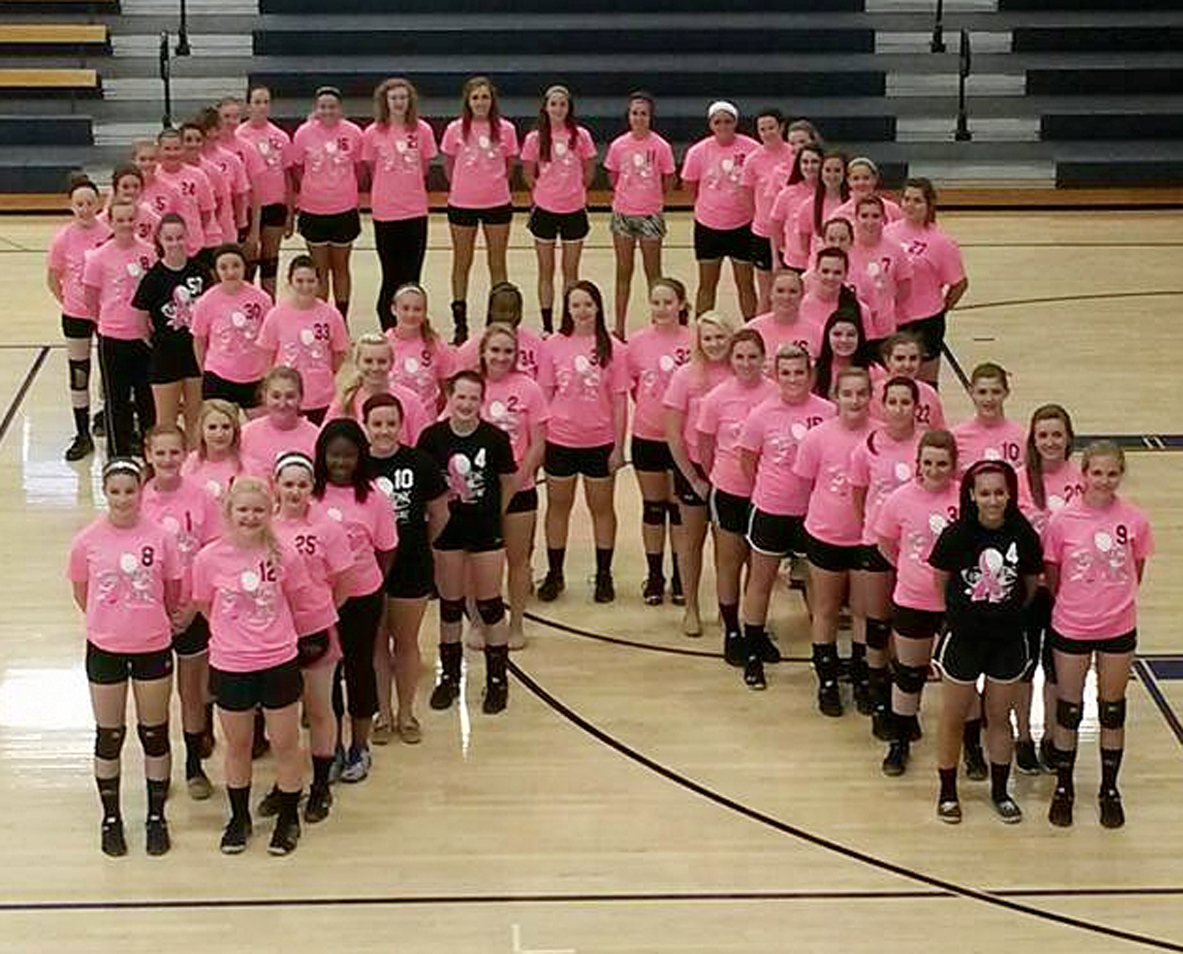 In a photo contributed by Chris Palmer, players from the Vandalia and Greenville squads form a pink ribbon prior to the Volley For The Cure game last Thursday in Greenville. 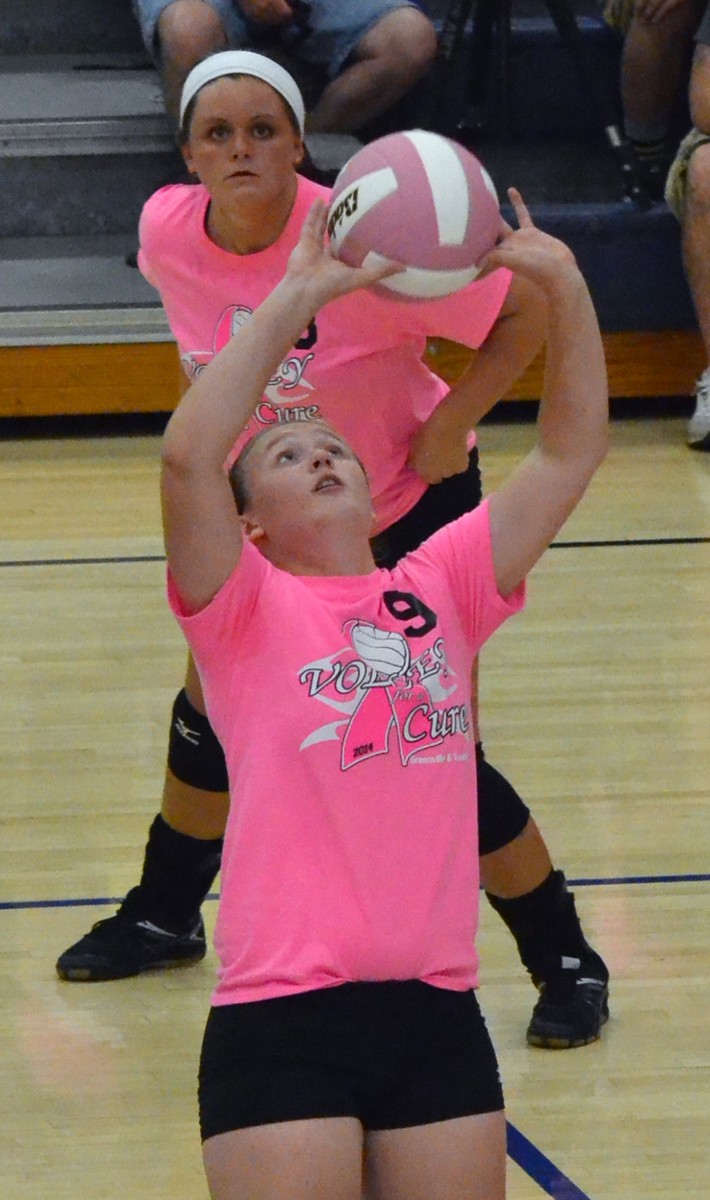 Kadi Metzger watches as Ritchey sets up a teammate.

Kadi Metzger (18) looks on as Jalea Paslay returns a shot.