Last week, Fayette Faces remembered Norman Wright, one of the 1947 graduates of Vandalia High School who went on to make a difference in their chosen careers.

This week’s focus is on his career and impact on others.
Norman and his wife, Louise, moved to Plainview, Texas, in 1959 and he returned to college, then settled into the world of finance and banking, where he filled the offices of president, vice president, and eventually chairman of the board of the Wells Fargo Bank in Plainview.
The mandatory retirement age was 65, so he retired, ending 42 years in banking, but not from the community work he had also been involved in all that while.
After Retirement, Community Work Continued
All the while Wright had been working, he was also very active in the community. He had served as president of several organizations, including the Lions Club, Heart Fund and Cancer Fund, United Way and Industrial Foundation, and two times as president of the Chamber of Commerce.
The Wrights are also active members of First Baptist Church, where he has served on five pastor search committees during his 55 years of membership in the church.
Canadian River Valley Authority
Wright took on a big commitment when he became involved with the Canadian River Authority.
The authority was created by Congress and signed into law by President Harry Truman. It operates under the state of Texas with the purpose of supplying water for 11 cities on the more than 320-mile aqueduct that runs from Lake Meredith and down to Lamesa, Texas.
The cities are Amarillo, Borger, Pampa, Plainview, Lubbock, Slaton, Levelland, Tahoka, O’Donnell, LaMesa and Brownfield in West Texas, a very dry part of the country.
Wright said that the annual rainfall in a normal year in that part of the state is only about 18 inches.
“We are, or at least, have been, in a serious drought for the past few years, and Lake Meredith got so low that we began to look for alternate sources of water for our more than 525,000 people in these 11 cities.
“We grow cotton, corn, grain, sorghum, wheat and sunflowers, and do some vegetable farming. The authority, with the agreement and participation of the cities, began to purchase water rights to supplement the lake water.
“The lake had been so low the last couple of years that we could not pump water out of it, and it had also became very salty. So, water wells were drilled and pipeline laid to the main aquaduct, and we began supplying well water to the cities.
Incidentally, the water we own, with rights that we have recently acquired from T. Boone Pickens, is not coming from irrigated farmland. It is hilly country, mainly used for raising cattle,” he said.
“The authority negotiated a sale of the Pickens water rights while I was president of the authority, and it now has well over 440,000 acres of water rights purchased (money from a bond issue). We now have enough water rights to furnish water to the cities for 150-250 years, depending on future rain and how many people come to live in West Texas.
“There are two board members from each city with a population of less than 10,000 and two from those cities with more than that number of residents.
“I, and another man, serve the city of Plainview and are appointed to a two-year term, with a renewal each two years. After more than 30 years on the board, and at 85 years of age, I am very seriously considering asking not to be reappointed.”
For the past 30 years, he has been on the board of directors of the authority, and served as president of that board for seven years, before turning it over to a younger man about two years ago.
Newspaper Coverage
The Plainview Herald front-page headline on April 8, 2011, proclaims the success of the CRMWA water program and quotes CRMWA President Norman Wright. Also there is a phot of Wright and Pickens, chief executive of Mesa Water.
The Amarillo Globe-News front-page headline from June 24, 2011, reads, “Group buys Mesa Water rights.”
The story begins, “Beaming faces filled the room – even a few tears of happiness fell – as billionaire oilman T. Boone Pickens and Panhandle officials signed a $103-million water deal, believed to be the largest in area history.”
The transfer involved 211,000 acres of water rights, the deal which gave the Canadian River Municipal Water Authority, of which Wright was president, rights for about 443.000 acres in the Panhandle.
Wright warranted the front-page headline again (Plainview Herald-Jan. 8, 2012) with his retirement as president of CRMWA.
The story reads, “After leading the Canadian River Municipal Water Authority to an unprecedented growth, Plainview’s Norman Wright has resigned as president.”
CRMWA General Manager Kent Satterwhite said, “When Wright took over as president in 2005, CRMWA had 42,000 acres of water rights. We now have 10 times that amount – 440,000. We made a lot of progress during his years of leadership.”
When the huge water deal was finalized, the headline read “Historic Day” and was accompanied by a large color photograph of Wright and Pickens.
“Mission Accomplished”…
…was the modest comment Norman made to a friend after the deal was finalized.
He made a big difference in many people’s lives for generations to come.
He was instrumental and influential, working with others to bring about the “biggest deal in the area’s history.”
Others agreed, as the Plainview Chamber of Commerce named him “Man of the Year Award” in 1979 for his involvement in raising money to build in Plainview a new YMCA building that included an Olympic-size swimming pool. It serves thousands of youth and adults every year and is a very successful operation.
And the woman behind the successful man – his wife was named “Woman of the Year Award” a few years later for her work in the United Way and for teaching English as a second language – all volunteer service.
Another VCHS class of ’47 graduate that reached for a goal … and attained it – Norman Wright. 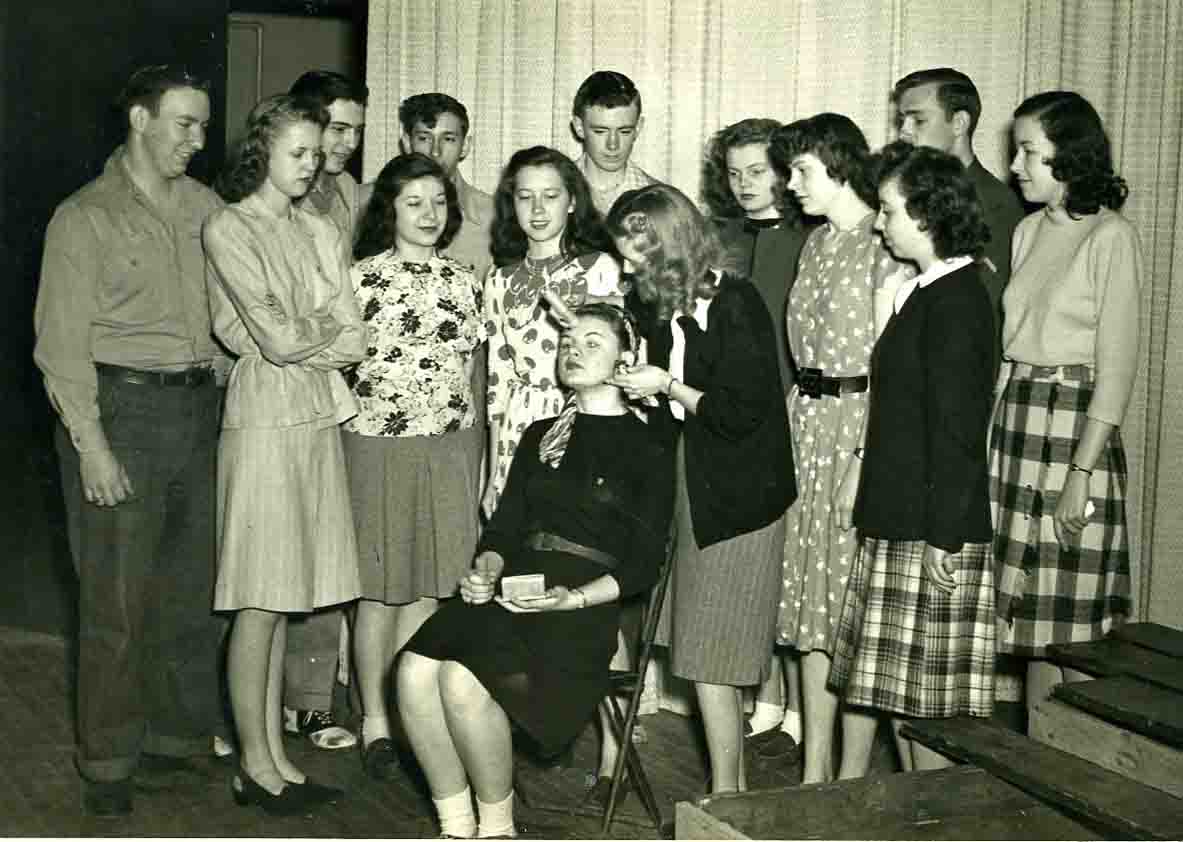 Norman Wright, the subject of this week’s Fayette Faces, is at the far left of this photo taken of Vandalia High School students getting ready for the school play. In front, Cordelia Metzger White, who is applying makeup to June Squibb, who would go on to become a TV and movie actress. In the second row are Marilou Crothers Alender, Jeanne Lawler Hohlt, Alberta Smith Wooten, Marguerite Low Karl and Joy Wollerman Mayo. In back are Wright, Charles Royer, Wayne Cunningham, Don Ervin, Pat McKeithan Janes, Jim Hilboldt and VHS English teacher Elizabeth Upchurch