Betty Burnheimer has lived in her modest, little home for more than 50 years. The house sits on a corner lot that, apparently, is composed of very fertile soil that has supported bountiful harvests of vegetables since Mrs. Burnheimer put out her first garden more than half a century ago.

“It has always been a good garden, even without any rain,” she said.
Other folks in the area claim that “Betty’s garden was always one of the best gardens in town.”
They claim that when she was younger, the garden was about 10 times larger than it is now, saying that it reached across a big expanse of what is now an attractive lawn that to a neighbor’s house. However in latter years, making and maintaining a large garden was a big job for Mrs. Burnheimer.
A Seed Was Planted …
… of a garden for all, by the Rev. Don Thomas, pastor of the Brownstown and Emmanuel Methodist Churches, and president of the Golden Years Club and Donnie Smail, who has always given much of his time, resources and talents for the community, and treasurer of the GY Club.
Both are also at home in the kitchen and can turn out delicious meals. Their wives, Marlys Thomas and Sharon Smail, are both very patient and understanding. They are also probably very thankful wives, that their husbands not only cook, but also are capable of cleaning up the kitchen afterward.
Pastor Don and Donnie – both experienced gardeners who not only enjoy gardening, but also enjoy helping others – combined forces.
Pastor Don, who wanted to be a part of the community, thought a community garden would be good. “It was a brain child of mine,” he said. So, the seed was planted.
Donnie, who is always willing to help out with a good plan, agreed with the community garden idea, and they are now in their third year of providing fresh vegetables for whoever in the community wants them for their tables.
Enter the Third Participant
The first garden plot donated for use as a community garden became unavailable this year, and the volunteers gardeners were very happy and appreciative when little Mrs. Burnheimer gave them permission, and her blessings, to use her garden plot.
Blessed with a Bountiful Harvest
The community, and the community garden are indeed, being blessed with a bountiful harvest and free vegetables that find their way to community tables, picnics and cookouts.
Already, the gardeners have given away more than 150 each of cucumbers and zucchinis, and 5 gallons of green beans.
There are four different kinds of tomatoes, green beans, bell peppers, potatoes, sweet potatoes, acorn squash, cucumbers, corn and beets.
Sharing the Blessings
Some of the produce is taken by Pastor Don and Donnie to the Golden Years building and placed on the table outside the front of the building, where the community residents are welcome to help themselves.
Junior and Betty Williams also contribute to the table from their home garden.
Residents are also welcome to go to the community garden, at the corner of Main and South Third streets, and pick produce themselves.
They also encourage volunteers to help in the garden, but do express the hopes that no one comes and destroys the garden.
Pastor Don and Donnie do most of the volunteer garden work, but said that they have caught Mrs. Burnheimer out there working, which they do not want her to tire herself doing.
However, the garden was Mrs. Burnheimer’s  “labor of love” for many years and it would be difficult  to give up such a fulfilling enjoyment as watching your garden grow from seedlings to needed food for your table, your family and now, the community. 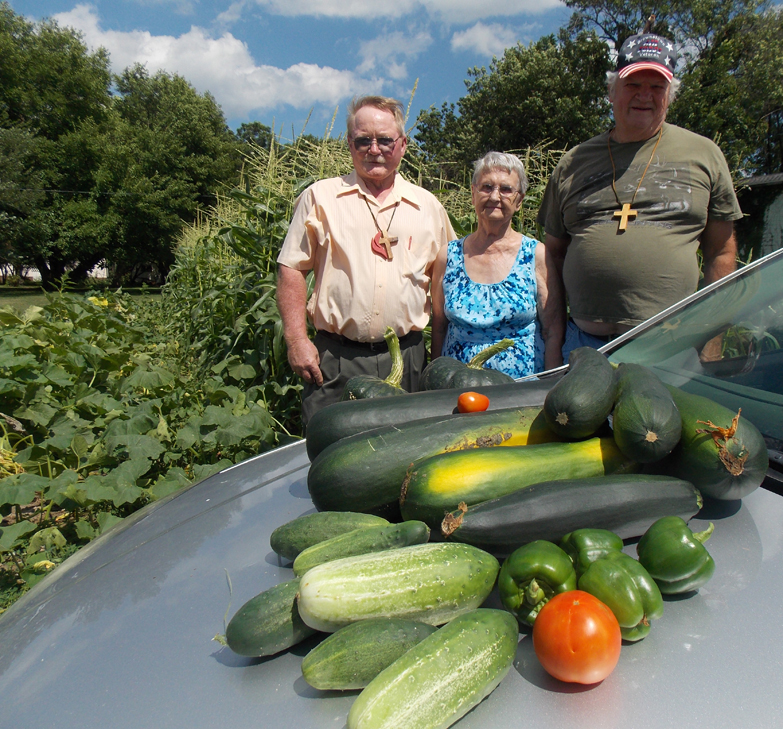